WEEasked some simple questions — and your neighbors, friends, co-workers, acquaintances, maybe some strangers, answered. Get to know them a little bit better with our fun, new series, “WEEasked.” Look for it a couple of times a month, most likely on Mondays. Do you have someone you’d like to see featured? Send us an email to weelunk@weelunk.com, and please be sure to put WEEasked in the subject line.

I am proud to say I’ve got a few original “Villamagnas” in my house. But no one is more original than the artist himself, Robert Villamagna. 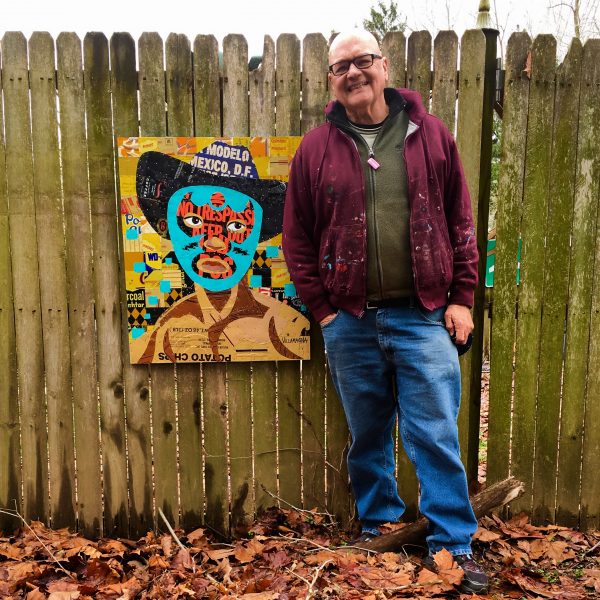 Bob is pictured behind his studio with a piece he calls “Cowboy Luchador,” which is currently part of the exhibition, “Tin Is the New Black,” at the Stifel Fine Arts Center through June 22.

Robert works in repurposed lithographed metal, assemblage and mixed-media. When you see one, you know it’s his — and it could be anywhere. His work has been exhibited at the Carnegie Museum of Art, the Andy Warhol Museum, the Mattress Factory, Senator John Heinz History Center, ARC Gallery (Chicago), Penn State’s Robeson Gallery, Pittsburgh Center of the Arts, Society of Arts & Crafts (Boston), Erie Museum of Art, the Ohio Craft Museum, Huntington Museum of Art, The Clay Center and the West Virginia Culture Center. You just missed his work at the Three Rivers Arts Festival Juried Visual Art Exhibition, which ended June 10. But you can catch some of his pieces at “Tin Is the New Black,” now on display at the Oglebay Institute Stifel Fine Arts Center. Villamagna served as curator of the exhibition.

In 2016, he was named West Virginia Artist of the Year, and five of Villamagna’s works are in the State of West Virginia Permanent Collection.

Mr. Villamagna recently retired from West Liberty University, where he was an assistant professor of art. Not wanting to leave the hilltop for good, he remains director of the university’s Nutting Gallery. 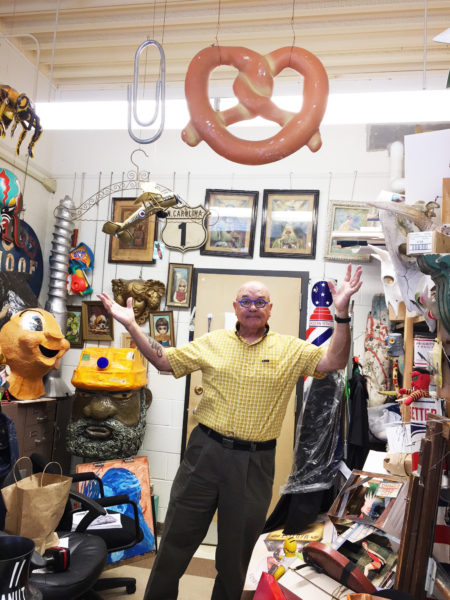 Mr. Villamagna in his office at West Liberty University.

He is one of the founding members of Artworks Around Town, which is celebrating its 20th anniversary this month. He also created the adorable logo for Later Alligator in Center Wheeling.

Bob grew up in the Ohio River rustbelt, he said, and “from the time I was a preschooler, I have had a mark-making tool in my hand. However, the rustbelt in general, is not a supportive environment for one who wishes to make art his life’s work. Growing up, almost every adult male in our neighborhood was a steelworker, or worked in a steel-related industry. I ended up working in a steel mill myself for 13 years.”

His life experiences suggest themes in his work, and sometimes the found objects and materials themselves suggest stories, he said.

“Some of these visual narratives are true, some exaggerated, some silly, and others may be total fantasy. Various symbols may show up in my work. … Most of my works are my response to the world around me, which may include the environment, the political climate, tolerance or our treatment of our fellow man. These ‘response works’ are an outlet for me, and prevent me from throwing bricks at the television screen.” 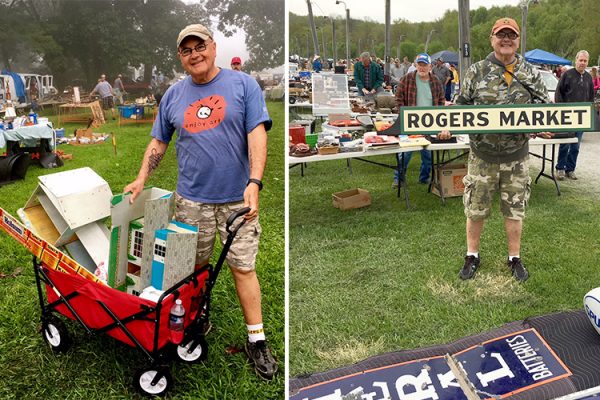 Bob with a haul from his second favorite flea market, Flea-Tique at Bull Creek in Tarentum, Pa., at left, and at right, he’s in his glory at his No. 1 shopping spot in Rogers, Ohio.

“I am very passionate about working with these materials, especially those items that show use, wear and rust. I love stuff with character. I often find myself wondering about the person who made these materials, who used them, who held them. I like to think that a part or energy of that person is still contained in these things, and now it’s transferred into the artwork. I’m giving that discarded piece of metal, or that old object, a new life, a different life. I am thrilled that I can use this stuff, and that it becomes a part of my creative process. These various materials are every bit as much of my palette as is a tray of oils are for a painter. For me, walking through a flea market is like walking through a well-stocked art materials store. The flea market is my palette,” Villamagna said.

I met Bob many years ago when I was a reporter at The Times Leader. I visited his house for the interview, and I am proud to say I was the first “outsider” allowed in his basement studio. What a fascinating place. I particularly remember the disembodied doll parts — bins of heads, arms, legs, etc. 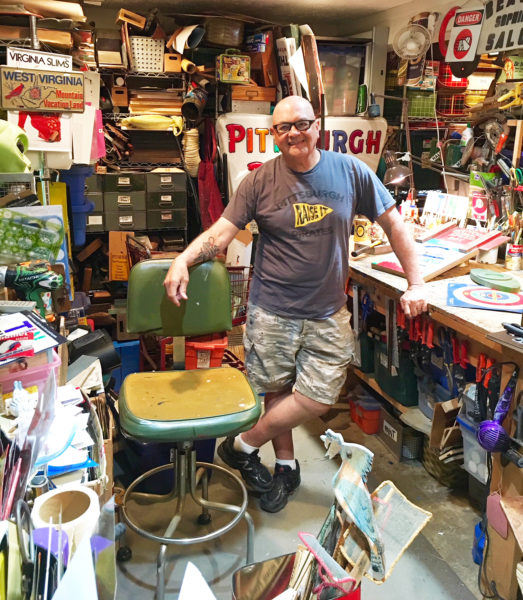 Bob in his studio. (He must’ve hidden the doll parts.)

Doll parts aside, here is what Bob answered when WEEasked:

Tell us something that would surprise Weelunk readers about you.

That I met the lovely Christine Villamagna at a rubber stamp convention in Cincinnati, Ohio. When I met her, I wanted to ask her out, but I just wasn’t ready to deal with rejection. So, I quickly wrote down a list of “Ten Reasons Not to Go Out With Me” and gave it to her. I figured she could check off the ones that were appropriate, and that way the rejection would not be so painful. She responded to each reason with a very witty reply, and at the bottom of the paper, she wrote her phone number. 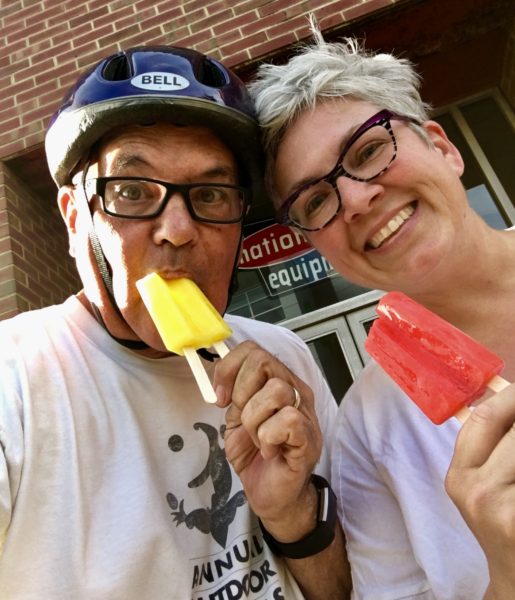 Chris and I both love film, so dinner and a movie tend to be our favorite night out. We see a lot of movies, but a close second would be live theater, the Wheeling Symphony Pops Concerts and spoken word events.

“Why We Sleep” by Mathew Walker, Ph.D.

Later Alligator! Our out-of-town guests all seem to love it! Great food, friendly staff, and an atmosphere that is not only unique, it’s Wheeling!

The Good Zoo Brew is a favorite of ours and is a fun event to kick off the summer. While I am in no hurry for fall to arrive, once it does, Oglebayfest is another fave of ours. It’s especially wonderful because I do the Artist Market, which, while a lot of work, is also a kind of reunion weekend for Chris and me. We have the opportunity to visit with friends, as well as the other artists and former students. We cross our fingers that the weather is clear and dry!

I would love to see Wheeling acquire a large contemporary sculpture such as Alexander Calder’s La Grande Vitesse in Grand Rapids, Mich., or Albert Paley’s Hallelujah in Charleston, W.Va. Although the two large-scale works were installed 40 years apart, both sculptures created controversy. Both sculptures evoke a wide range of reactions and comments from viewers. Both works give a creative energy to the community.

In regard to the Calder work, it not only helped revitalize the area, but it also sparked the city’s interest in art and led to a new art museum, symphony hall and a civic theater soon after. While the Paley work may not have had the same level of impact as the Calder, it does add a uniqueness to the urban landscape of Charleston, and, for me, it is a distinguished part of the city.

I would like to see continued support, upkeep and expansion of our Wheeling Heritage Trail. This hard-surfaced walking and biking path is a wonderful asset to our city and is beneficial to a huge segment of our community.