Search
Home
LifestylesHealth
It’s hard to write a story when you slept through most of the interview. You could call it bad journalism. Or just plain bad manners. But in this case, snoozing through my time with Carrie Eller was probably exactly what she was expecting.

Eller owns Under the Elder Tree Apothecary and Healing Arts Centre, located on the west side of Centre Market. A licensed massage therapist, herbalist and aromatherapist with over 18 years of experience, she opened the business in spring 2014. Three years later, she moved to her present location at 2205 Market St.

Under the Elder Tree offers massage therapies including (but not limited to) traditional, hot stone massage and reflexology. You’ll also find yoga and meditation classes. The storefront sells a wide variety of healing and holistic supplies like essential oils, CBD, salt lamps, bath bombs and natural remedies. I personally like the Sniffle Tea when the first germs of the year arrive, and during my visit, I had Eller create a personalized essential oil blend for my car to combat the smell of wet dog. 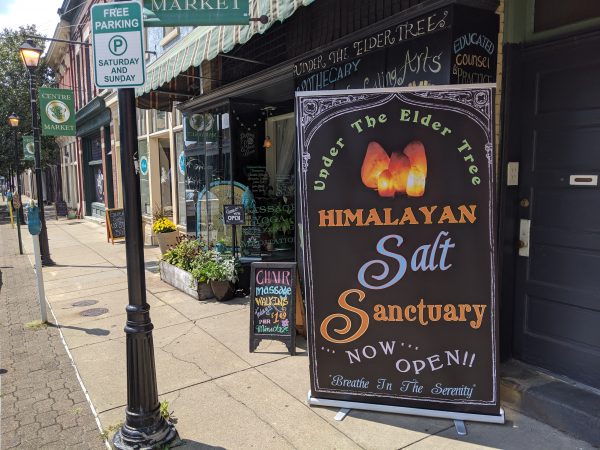 Under the Elder Tree Apothecary and Healing Arts Centre is located at 2205 Market St. in the Centre Market area of Wheeling.

Eller owns the building and lives on the third floor. She holds yoga classes on the second, where she and the staff recently constructed a salt therapy room. I’ve never tried one, so I went down to Under the Elder Tree to check it out.

What exactly is a salt room? You may have heard of salt caves. These are spaces where you can sit among bricks of Himalayan pink salt, which is mined in Pakistan. Proponents of salt therapy — also known as halotherapy — find it can be beneficial in many ways. 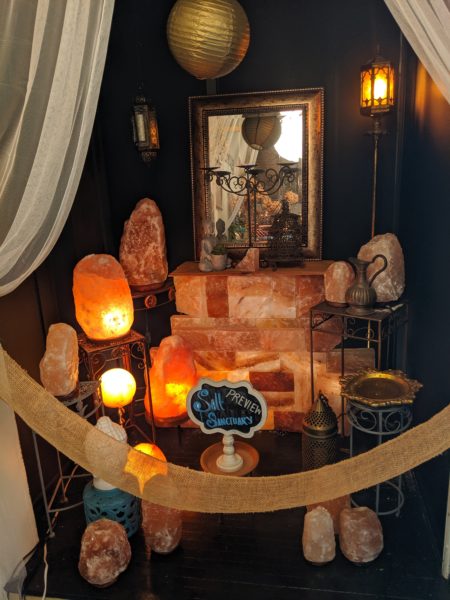 A preview of the Salt Sanctuary can be viewed in the storefront.

Eller refers to her salt therapy room as the Salt Sanctuary. While many salt rooms are designed to mimic the feel of a cave, the Salt Sanctuary feels like a cathedral. The wood is dark, the ceiling twinkles with stars, and the salt walls rise up around you, glowing in the dim light. Candles adorn the mantle; window frames look out on a dark sky. I’d never seen a salt room like it.

Eller said her Salt Sanctuary is a nod to her building’s historical design.

“I’ve been to salt caves before, and I like the cave feel. But the architecture here — it’s so formal. That beam there —” she pointed to a heavy, dark beam running along the ceiling, “— that became kind of my inspiration piece. That and the fireplace. So we already had the old gothic-type theme and an altarpiece. To me, it just screamed an old type of sanctuary. And I like the idea of ruins.”

In Greek, Roman and medieval times, fugitives could seek sanctuary in a church to escape the often harsh punishments of the day. Once inside, they were safe under the protection of divine law. Today, we face other kinds of trials and tribulations, but we still seek places of peace from time to time. In addition to potential physical healing, the Salt Sanctuary holds meaning on a spiritual level, whatever your belief system entails.

“Lots of us were raised in the church, with a Christian background,” Eller said. “It’s part of our combined backgrounds. It’s something we all identify with. At the same time, the foundations are there, but it’s kind of crumbling away and open to your own interpretation, to meditate and do internal work in the way you feel is right for you.”

THE PART WHERE YOU’LL TURN INTO GELATIN

After we talked, we settled into zero-gravity recliners and wrapped up in soft blankets. Eller turned up the background music, a seemingly endless chorus of Tibetan singing bowls. The bowls, which date back to the eighth century, facilitate a state of deep relaxation and help balance the left and right hemispheres of the brain. It’s an excellent accompaniment to meditation and a yoga practice.

“The Himalayan salt and the singing bowls kind of lull you deeper into a very meditative state,” Eller said. “We’ll be having yoga and meditation here in the salt cave as well.”

By this point, I was comfortable enough that thoughts weren’t as coherent as I’d have liked, so I shut up, lay back and breathed. The salt fan was directly above me, and I felt a tickle in my throat. I coughed a few times as whatever crud was in my sinuses began to drain. Eller said some initial coughing isn’t unusual as the fine dust enters the breathing passages.

“You can relate it to what a good lightning storm does to the atmosphere. It just kind of cleans it. This does that on a smaller scale,” she said. And then, we both drifted off to the land where meditation meets an afternoon nap.

Eventually, we had to wake up and return to our lives. But she was right: I felt really good. Calm and peaceful. And my sinuses stayed quiet all afternoon. 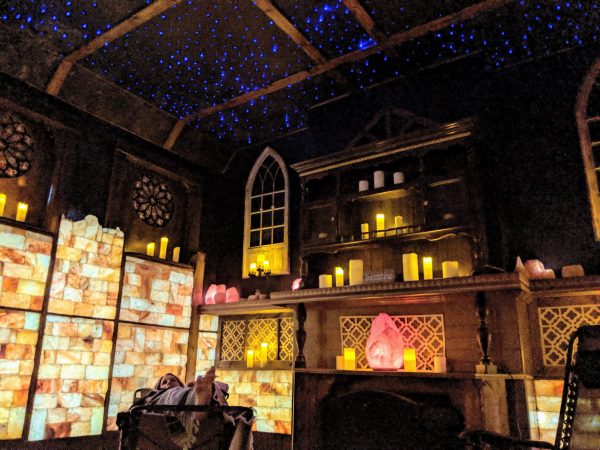 Owner Carrie Eller relaxes in a zero-gravity chair in her new Salt Sanctuary.

The Salt Sanctuary is the only halotherapy room within 50 miles of Wheeling. You can book a session on the store’s website. Eller is designing a series of Salt Sanctuary packages for purchase, and people will be able to use the room solo or in a group. She aims to offer services like chair massages and foot reflexology for groups while they’re enjoying the Sanctuary. Additionally, yoga and meditation classes will held in the Salt Sanctuary.

Carrie Eller encourages people to talk to her. Perhaps you’ve got sinus problems. Maybe it’s arthritis, low mood or fatigue. After almost 20 years in the healing business, she can offer therapies and treatments that may just give you the boost you need. She’s especially excited to share the benefits of the Salt Sanctuary, a remarkable experience tucked into a busy corner of Wheeling.

Under the Elder Tree Apothecary and Healing Arts Centre did not compensate me for my review. My opinions are my own.

• Laura Jackson Roberts is an environmental writer and humorist in Wheeling, West Virginia. She holds an MFA in creative writing from Chatham University and serves as the Northern Panhandle representative of West Virginia Writers. Her hobbies include hiking, travel and rescuing homeless dogs. Visit her at laurajacksonroberts.com.