Search
Home
People
We all know the bank of Wheeling Creek is a busy place, especially by Mt. DeChantal Kroger. Most of the year, you’ll find a gaggle of Canada geese waddling around, as well as a handful of mallards. But one bird, in particular, catches your eye: a domestic white goose.

Where did the goose come from, and what is it doing there?

Pat is an Embden goose. The breed is said to be of German or possibly Dutch origin, and they’re common on farms. The tallest domestic goose, Embden females will grow to about 20 pounds while ganders may reach 30. When kept, they tend to be comfortable around humans but not particularly friendly or approachable. They express their displeasure by hissing and ruffling their feathers. This hardy breed can survive cold winters.

Weelunk caught up with Pat the Goose to find out what life is like on Wheeling Creek.

Here’s what Pat the Goose answered, when WEEasked:

What’s the word on the creek these days?

Well, spring is coming, so there’s a lot of activity, both at Kroger and on the beach. The Canada geese are getting ready to lay their eggs, which makes them defensive, so the attitude here is getting saltier by the day. We’re starting to see fishermen again because the fish are waking up hungry, and the kayakers will be out soon. Of course, it’s baseball season across the creek at Linsly. I like their chances this year. 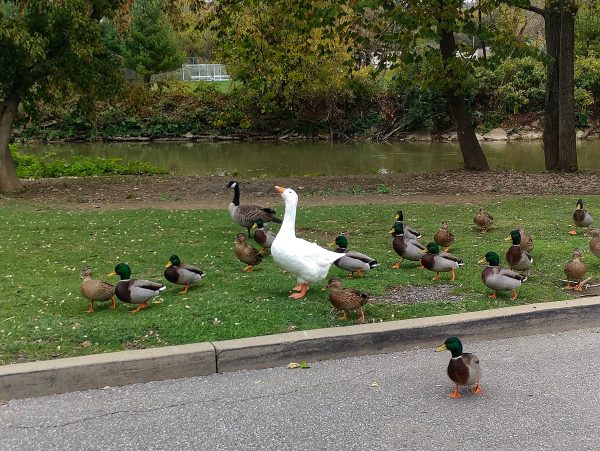 Pat and the mallard gang search for free hand-outs. Feeding waterfowl should be discouraged for Pat’s safety and ours.

What do you see as the biggest problem with area creeks and does the city/county do enough to alleviate the problem?

The biggest problem facing our creeks right now is E. coli. The levels in our waterways, especially Wheeling Creek, are often much higher than they should be, to the point where it’s not always safe for humans to be in the water.

Now, I’m a goose, so I’m definitely part of the problem. Me and my buddies poop in the creek, for sure. What do you expect, though? You guys come out of Kroger and toss food at us. We have no reason to leave. That said, we’re probably only part of the problem. The city needs take a look at CSOs (combine sewer overflows), because they can be another source of E. coli. And I mean, along with human poop comes antibiotic-resistant bacteria and diseases like hepatitis. People like fishing and kayaking, and Wheeling Creek is a gorgeous paddle. I should know — I live here, and I paddle it all the time. But nobody wants to paddle a stinky stream where they can’t even touch the water. I really hope the citizens of Wheeling will ask the city to invest in clean waterways, and that the city will see how water quality leads to quality of life. And it’d be nice if there were a “Friends of Wheeling Creek” group that could rally on behalf of this and other local creeks, because it’s an issue all over the area. You people don’t seem to realize what you’re doing to your waterways.

I’m not lonely. A lot of folks see me and say, “Oh, look at that poor white goose with no family.” They think I’m out of place, but these Canada geese are super inclusive. Nobody seems to mind that I look different or that I’m domesticated. They’re my brothers and sisters, and we’re all geese, right? We’re here to poop on things, honk at cars and steal Cheetos from little kids.

And actually, a lot of Canada geese flocks have a domesticated goose among them. Canada geese don’t migrate much these days because you humans make life so easy for them. I’m glad — this body isn’t exactly made for long-distance travel. I mean, let’s be honest: I’ve got a fluffy butt. It’s not streamlined. I’m built for farm life, not migration.

Also, I’ve got some Hellbender buddies. Not by Kroger, but way up the creek, so that’s cool. Hellbenders are interesting little guys. You’d never know it, but they’re incredibly funny, and they tell the raunchiest joke you’ve ever heard. I guess when you’re slipperier than snot and live under rocks, you need all the personality you can get, right? 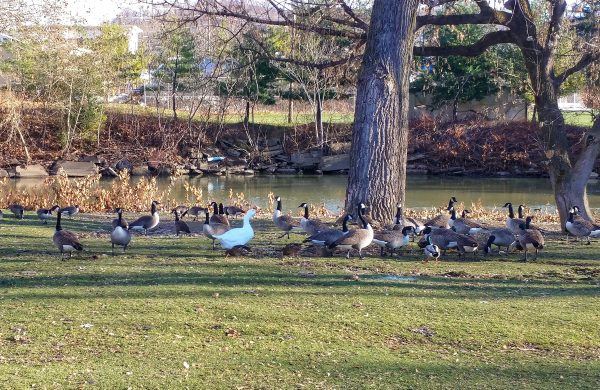 Pat and family enjoy a spring waddle on the banks of the creek.

I like Dimmeydale. It’s just a short swim up the creek, and there’s always a little league game going on at the field. I’ve got a couple of mallard friends — Frank and Edith — who have their courtship every year on the fish pond at the Stifel Center. Plus, Dimmeydale does that great 4th of July parade each summer. Geese love parades, and I think I’d be a heck of a grand marshal. (Hint, hint, parade committee.)

I used to take them to Wheeling Park, but then the city started that whole don’t-feed-the-geese thing, so now it’s not so much fun. I know we bit a few toddler fingers, and I did steal a ham sandwich from an old man on a bench but come on, Wheeling. That was harsh. Yes, we befouled a few sidewalks, but we’re geese. It’s what we do.

Last year my friend Chris, a Graylag goose from Wash, Pa., flew in for the weekend. Chris usually hangs around golf courses and airports with some Canada geese pals, but people are starting to hire border collies to chase them away. We went down to Heritage Port during the Italian Festival, and the pickings were fantastic. I had to belt a few raccoons when it came to scraps, but we cleaned up. Did you know there’s a one-eyed woodchuck that eats DiCarlo’s pizza down there? Climbed into the trash can and pulled it out and gnawed it. Anyway, we ate so much that Chris had a gall-bladder attack and fell in the river. Floated all the way down to Wetzel County. 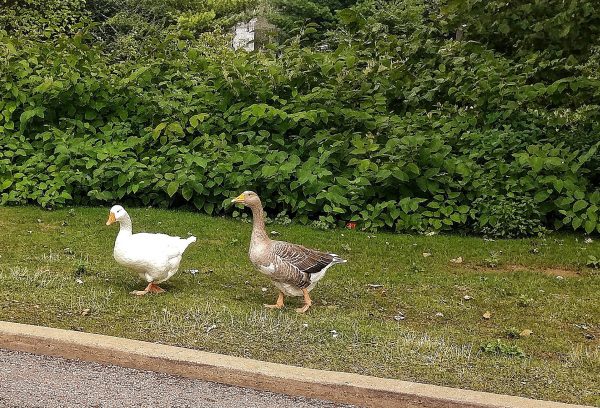 Pat and Chris the Graylag, out on the town

If you could be learn a new skill, what would it be?

I’d really like to try my hand at crochet, but I don’t have hands.

It’s an essay collection by Ashland Creek Press called Writing For Animals. One essay talks about the ways humans anthropomorphize animals to suit their narratives, and how they rarely capture the true spirit of the creature they’re voicing. In another, the author makes the case for giving voice to an animal as a way to convey an environmental message in a palatable package. Nobody wants to be beaten over the head with depressing facts about water pollution, but if it comes out of the mouth of a funny critter, maybe people are more inclined to consider the issue. I don’t know if I buy it. 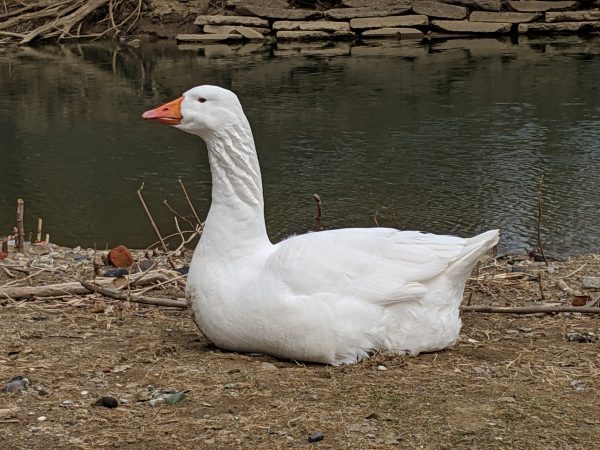 I’m also reading The Essays of E.B. White. He wrote Charlotte’s Web, but he also wrote about real life. The essay “The Geese” just moves me to tears every time. He was funny and brilliant and wonderful.

Oh, and I’m also reading I Could Pee on This: And Other Poems by Cats, by Francesco Marciuliano. It speaks to any animal who doesn’t give a honk about manners or social protocol, and that has “goose” written all over it.