It has been 10 years since a Wheeling team has won a West Virginia Soccer Association State Cup Championship, but that drought ended on Sunday, May 17, in Beckley when F.C. Wheeling United’s U13 Girls defeated the West Virginia Futbol Club (WVFC) out of Charleston 2-1 to claim a state championship. That win followed a 4-0 drubbing of the Fury Soccer Club out of Morgantown in the semi-finals on Saturday. 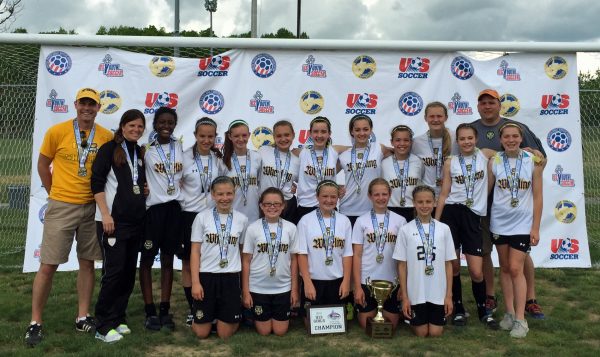 Wheeling’s U13 girls began playing together in 2010 with new players joining the team each year. All the girls on the team are 12 or 13 years old, and most have been playing together for the last three years. Coaches Dave Delk, Carrie Hanna, and John Aderholt realized the fruition of their hard work in 2014, when the team won its first Pennsylvania West league and West Virginia Open Cup titles, and the coaches hoped to build on this success with a state title run in 2015. The team has been training since last August with a demanding fall schedule followed by winter indoor training and indoor games.

The road to the State Cup Championship began in Morgantown on April 25 with the preliminary round of games to narrow the field down to four teams for the semi-finals on May 16 in Beckley. Based on previous results, F.C. Wheeling’s U13 girls essentially needed one win out of two games to qualify for the state championships in Beckley. The team would be facing the Mountain State Pride out of Bridgeport in its first game and the West Virginia Futbol Club (WVFC) in its second game. The F.C. Wheeling had played Mountain State earlier in March and had come out on top with a 4-1 win; however, the game in Morgantown was a different story with Mountain State capitalizing on every Wheeling mistake and coming away with a 4-3 victory. The next game against WVFC, one of the state’s best U13 teams, then became a win-or-go-home circumstance. The game was tied 3-3 when with 10 seconds remaining, Wheeling’s Gracey Hanna found the back of the net to punch the team’s ticket to Beckley. 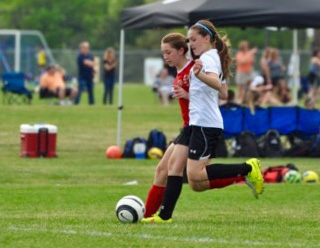 F.C. Wheeling next faced Fury S.C. in the May 16 semi-final game in Beckley. Wheeling had faced Fury the prior weekend on May 10 in a league game and won 2-1, and the teams had faced each other the prior spring in West Virginia’s Open Cup title game with Wheeling also coming out on top. To say the two teams were familiar with each other would be an understatement. Wheeling’s goalkeeper, Jillian Blair, came up with two big saves early in the action to settle the team, and Wheeling then cruised to a 4-0 victory with two goals by Zera Zervos and one goal each by Gracey Hanna and Emily Prosser with assists by Annalese Aderholt, Abby Anderson, and Loryn Ramsey. F.C. Wheeling learned its opponent in the final game would also be a familiar one when WVSC defeated Tri-County Soccer Club out of Martinsburg 2-1 in an overtime penalty kick shootout. 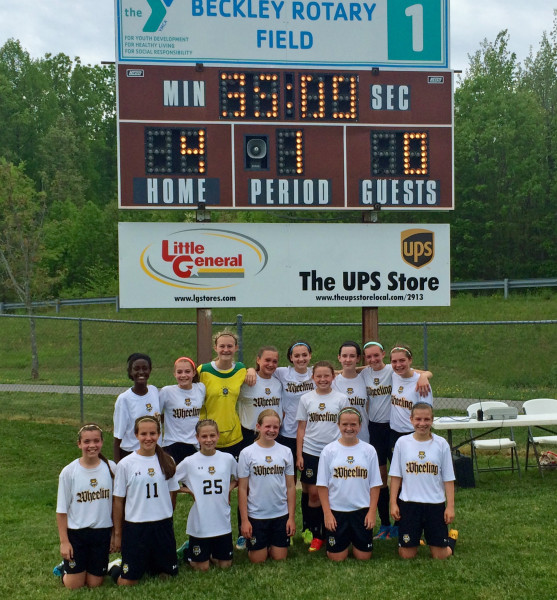 Sunday’s state championship game was slated for an 11 a.m. kickoff and began with a bundle of nerves for Wheeling’s players. As well as the girls played on Saturday, the team could not find its prior form for much of the first half in Sunday’s final. A successful long distance shot by WVFC in the 15th minute of the first half made the score 1-0, and but for the stout defending of Wheeling’s backline of Eldana Smith, Daisy Reasbeck, Megan Matthews, and Cat Anderson the halftime score could have been worse than the 1-0 deficit. In a sport where two goals usually means a victory, holding WVFC to one first-half goal was essential to a second-half comeback. 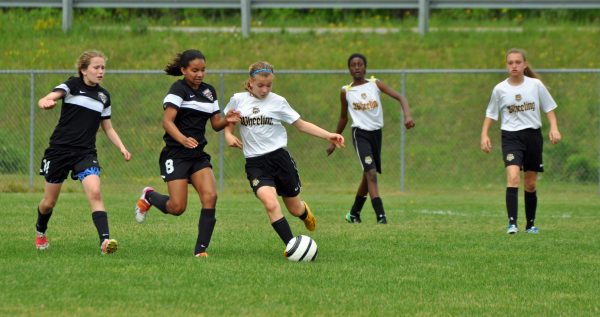 At halftime Coach Carrie Hanna implemented a formation change to kick start an offensive attack which had resulted in zero first-half shots on goal. With additional halftime motivation from the coaches, the second half began with a relentless attack by Wheeling which rarely saw the ball leave Wheeling’s attacking half of the field. The perpetual pressure placed on the WVFC defenders finally paid off in the 20th minute when Wheeling’s Annalese Aderholt scored her first goal since Sept. 9, 2012, to tie the score at 1-1. Aderholt, one of the team’s best defenders, found an opening in WVSC’s penalty box and drilled her shot past the WVSC keeper. F.C. Wheeling kept up the offensive onslaught for the rest of the second half but could not find the winning goal, and the game ended in regulation with the score tied. 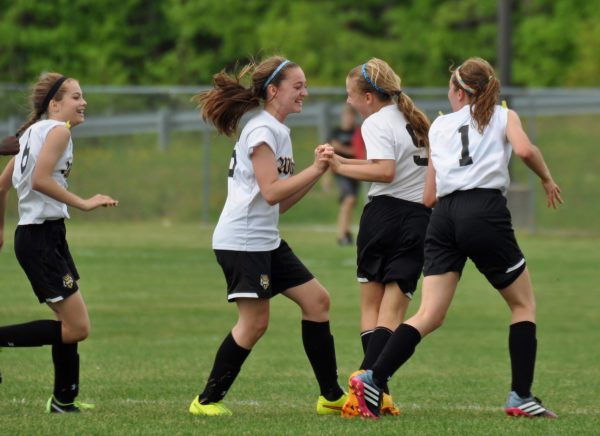 The tie meant the teams would play two 10-minute overtime periods with no sudden death. If the score remained tied after the additional 20 minutes, the match would be decided by penalty kicks. The first overtime period saw neither team able to mount much of an attack and ended with no goals. F.C. Wheeling picked up the pace in the second overtime period and was able to place several shots on goal. With three minutes remaining in overtime Wheeling striker Abby Anderson maneuvered past several WVFC defenders and found herself with an open shot about 12 yards from goal. She calmly buried the ball in the side netting and celebrated with her teammates the now 2-1 lead. Wheeling only had to kill three minutes to secure the victory. Despite the time remaining, Anderson’s goal had crushed WVFC’s spirit, and F.C. Wheeling was able to keep the ball away from WVFC for much of the remaining time. When referee blew the final whistle, the Wheeling girls erupted in unbridled joy. 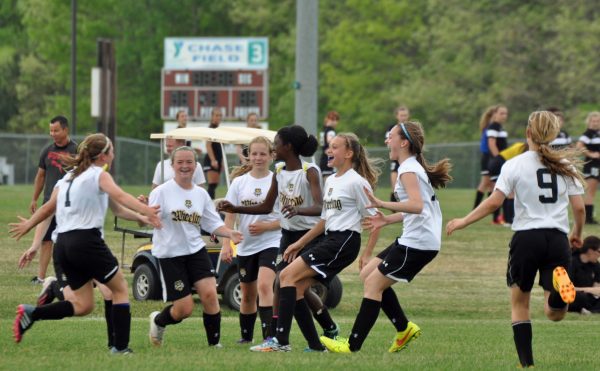 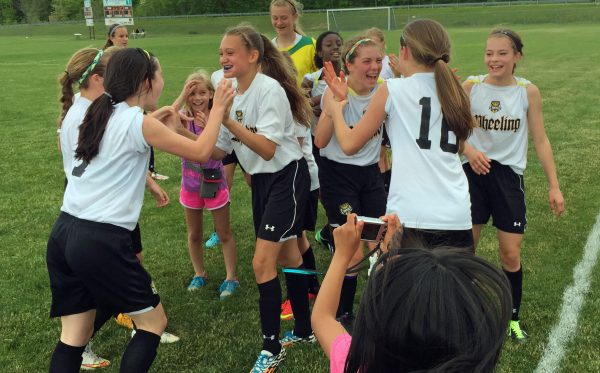 The West Virginia State Cup title earns Wheeling’s U13 Girls a trip to the Region 1 Championships in Barboursville from June 25-30 where the team will compete against state champions from 14 east coast states, including North Carolina, Virginia, Maryland, Pennsylvania, New Jersey and New York. It’s a David versus Goliath scenario as no youth team from West Virginia has ever won a Region 1 title, and no Wheeling team has ever even reached the semi-finals of the tournament. The reward for this Wheeling team is that the girls will get to play against some of the best youth teams in the country and enjoy what could be a once in a lifetime experience. The experience will be the victory. 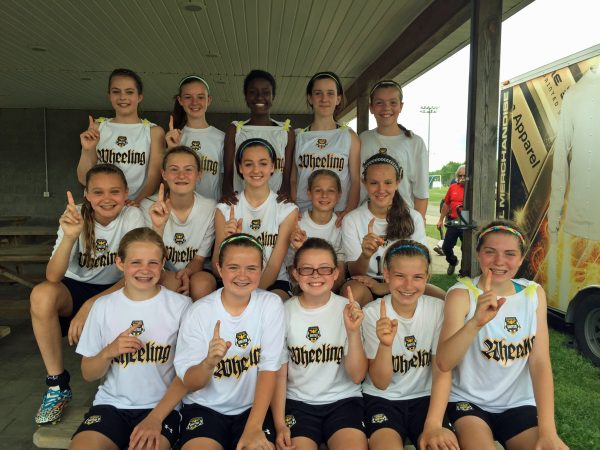