A violinist sat on The Capitol Theatre stage playing “Someone Saved My Life Tonight” with the Wheeling Symphony Orchestra on Feb. 9. Just two months earlier, during a symphony rehearsal, someone truly did save her life.

The musician, who requested her name be withheld, slumped over as she played during the Symphony on Ice rehearsal at WesBanco Arena. She had no pulse. The call went out: “Is there a doctor in the house?”

Dr. Raina Burke, the mother of one of the skaters, responded.

Wheeling Hospital emergency room physician Dr. Burke will tell you (a little too humbly, of course), that it wasn’t just her presence that made a difference that day. “So many things came into play to save her life,” she said.

There was the janitor who heard her yell for a defibrillator and retrieved it, stat; Dr. Ken S. Ho of Pittsburgh, who was also a skater in the show was there, as was Hermiety Van Laar, a nurse practitioner, who came to Dr. Burke’s aid; and the person who called 911.

And much credit goes to an automated external defibrillator (AED) on the premises.

But, really, it was Matt Velez who saved the musician’s life that December day.

The defibrillator has become standard at many public facilities these days thanks to Mary Velez of Wheeling, whose son Matt died in 2001 at the age of 17 during gym class at Wheeling Central Catholic High School.

Matt was born with a congenital heart defect call truncus arteriosis. In his short life, he had undergone three open-heart surgeries at Boston Children’s Hospital. 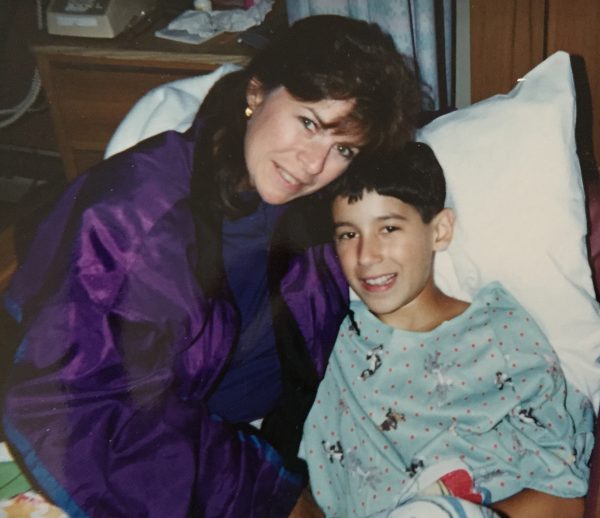 Mary and Matt Velez at the Boston Children’s Hospital following Matt’s third open-heart surgery. He was 9 years old at the time.

After Matt died, his heart and lungs were sent to the hospital “so that we could save others’ lives,” Mary said. The hospital pathologist, Dr. Van Pragh, called to tell her that if the school had had an AED device, it could’ve saved Matt’s life.

That call set Velez on her life-saving path in memory of Matt.

THE MATT VELEZ SAVE A LIFE FOUNDATION

Velez began her mission of educating the public about defibrillators and getting funding so that schools and other spots around town could have them on site. Her foundation, the Matt Velez Save a Life Foundation, has raised $200,000 to $300,000 and placed well over 200 defibrillators in such places as WesBanco Arena, The Capitol Theatre, the Ohio County Health Department, all area schools, the YMCA, churches and many other places. She continues fundraising and educating 17 years later.

The defibrillator that Velez provided to WesBanco Arena wasn’t the one used when the musician had her heart attack, Velez pointed out. Hers, however, is still on premises at the front of the building. The one used on the violinist was stored in the maintenance shop, stage left, according to Doug Campbell, assistant manager at WesBanco Arena.

It was through Velez’s generosity that the facility received its first AED. The second one was provided by paramedics for the hockey program, Campbell said.

“We haven’t had an incident prior to this one (in December),” Campbell said. “Our staff is trained on a regular basis. We just did a training with our staff in October at the beginning of hockey season. The Wheeling Fire Department comes in and does an AED and CPR training with us,” he said.

KEEPING UP TO DATE

The important thing now, Velez said, is keeping the AEDs updated and to make sure people are aware they exist.

Velez explained that the batteries and the electrodes (or pads) need to be replaced every couple of years.

The average lifespan of an AED is about 10 years. Many of the early ones have been replaced with the help of Velez’s foundation.

“We have already bought new AEDs for Central as they were the first school we helped. I have also bought new ones for some Ohio County schools and Bellaire schools. In addition, some of the AEDs bought early on were recalled, and the company gave us new ones as replacements, so they won’t need to be replaced yet,” she said.

“Someone needs to be in charge,” she said. If there’s an AED on location, a person should be assigned to check on it monthly to ensure it is operable. Oftentimes, the AED was placed years ago in the care of an employee who has long since gone, leaving the responsibility to no one, Velez noted.

Imagine trying to use the defibrillator only to have it out of batteries, while someone’s life hangs in the balance.

“That’s happened,” Velez noted. She has heard of instances, including one at a major airport, where people were going from pillar to pillar to pillar where the AEDs where posted, only to find them all out of service.

WesBanco Arena “deserves a pat on the back” for having an AED and that it worked, she said.

“I hope we never have to use it again — but it’s on site if we need it,” Campbell said.

WHAT YOU SHOULD KNOW

First, you must know what an AED is, Dr. Burke said. “I heard several around me say, ‘What is that?’” when she called for an AED.

Second, you must know to ask for it. “Usually, I don’t know where they (AEDs) are,” she said. “My heart did a little jump” when she discovered that the janitor knew just where to find the device.

And third, “you must know not to be afraid” to use it. “It’s pretty foolproof. You’re not going to hurt anyone, and it really walks you through it.

“The sooner you get the first shock, the better the chances are for survival. … There’s not always going to be a doctor or someone around who knows what to do. You could be the one to save a life.”

WHAT YOU SHOULD DO

Tell someone to call 911. If one person has that responsibility, you know it will happen.

Have someone get you the AED.

Check the person’s pulse, then start CPR until the AED arrives.

HOW TO USE THE AED

Once you get the AED, open it up. Some models are different, Dr. Burke said. Some turn on automatically, while others need to be turned on.

“Once it’s turned on, it tells you exactly where to place the pads (electrodes),” she said.

Then, the AED begins to analyze the heart rhythm. If it says, “shock advised,” you press the flashing orange button. The electrical shock, or defibrillation, will help the heart re-establish an effective rhythm.

What if you don’t know CPR?

Velez noted, “Anyone with a sixth-grade education can do it.”

THE PROOF IS IN THE LIVING

The Wheeling Symphony musician’s story is not the only success story.

There are several “saves” Velez can say are “because of our angel Matt.”

In 2004, Coach Paul “Bud’ Billiard was lecturing at Bethany when he collapsed, and was brought back to life with the help of an AED. Billiard has since gone with Velez to tell his story to convince others of the importance of having an AED on site, Velez said.

Another “save” was a teen at an area school.

“It was after school, and team members were doing preseason training, I think. A young man had a cardiac arrest, and the coach yelled for the kids to get help and the AED. The school nurse happened to be there after school and grabbed the AED and ran to the scene. Together, the coach and nurse saved his life. The coach had actually been my older son’s basketball coach a few years before.”

“Another save was at Oglebay Park of a man at a conference there, and I got to meet him and his family. His cardiologist invited me to dinner with them,” Velez said.

In another case, a man was playing tennis at Wheeling Park when he collapsed. “A cardiac nurse was playing on a court next to him and did CPR and used the AED to save him,” she said.

That gentleman came to visit Mary at her office one day, to thank her.

“He gave me a big hug, and I could feel that big heart beating,” she said.

And when she heard of the violinist’s story, she choked up. “My son helped make that happen.”

Even if it wasn’t the exact AED she provided, it was Velez who got the ball rolling … and the hearts beating.

All these stories add up to just one heart-warming fact in Mary’s eyes: “He didn’t die for nothing.”

For a visual step-by-step as to how to use the AED, check out this video: