Long before Karla Boos had any idea of founding a theater company, she got her start as a young actress at various Wheeling venues, including Oglebay Institute’s Towngate Theatre. 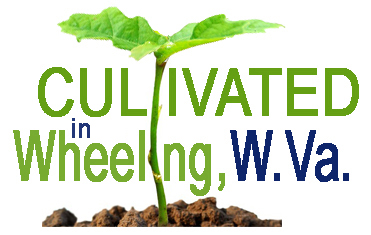 On Monday, she’ll return to that beloved stage as Pittsburgh’s Quantum Theatre brings its current production of “The Gun Show (Can we talk about this?)” down the road to Wheeling for one night only.

The one-person show by E.M. Lewis presents five gun-related stories from the female playwright’s life but written for a male actor. The play develops the idea that, while our cultural conversations about guns tend to happen at polarizing extremes, most of us are somewhere in the middle in our actual experiences, thoughts and feelings. As the play’s tagline says, “Can we talk about this?”

The theater’s potential to open and deepen conversation is something Boos has always been interested in. It’s one reason she founded Quantum Theatre nearly three decades ago. The nonprofit is unusual in that it doesn’t actually have a physical theater. Plays are staged in familiar community locations — a library, a Gothic church building, an empty swimming pool, horse stables and, for the upcoming production of King Lear, the blast furnaces of a former steel mill.

“The Gun Show” is being presented at three Pittsburgh locations in addition to Towngate: a neighborhood library in a predominantly African-American neighborhood; an urban community college campus; and a suburban independent movie theater. 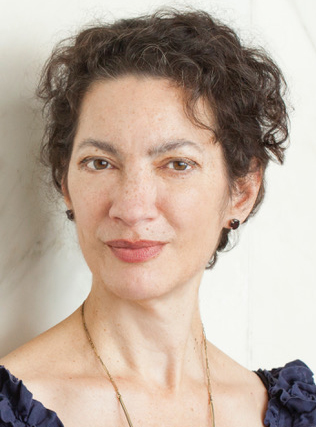 Boos isn’t acting this time. She is the founder and artistic director of Pittsburgh’s experimental Quantum Theatre, which she started in 1990.

Full circle? It’s more of a very wide ellipse, with one focal point in the Ohio River Valley and the other on the West Coast.

Boos recalls her first professional play at the Oglebay Amphitheater in 1976, when she was a teenager. For the bicentennial summer season, it was Time Steals Softly by Virginia Jones Harper, a musical based on the life of Wheeling frontierswoman Lydia Boggs Shepherd Cruger.

“The title is humorous because, in my memory, it was four hours long. I’m sure it wasn’t quite four hours, but it was so darn long. And it was really not a success,” she says, laughing. “But that was my first play.”

Boos also acted at Towngate, sometimes with and sometimes directed by the late Hal O’Leary. “I’m indebted to Hal,” she says. “I think about him often. He was the real deal, so early in my life, of a man of the theater, and what the theater as a kind of frame for your life can offer. I’m sure I would not be the person I am today but for Hal.”

“I’m indebted to Hal. I think about him often. … I’m sure I would not be the person I am today but for Hal.” — Karla Boos

After graduating from Mount de Chantal, she went to Bethany College for two years, getting to play roles like Portia in The Merchant of Venice. “It was a beautiful and idyllic place,” she says — just not big enough. She finished her bachelor’s degree at the University of Pittsburgh, where she also got to take some classes in the school’s newly started graduate program in theater.

Pittsburgh wasn’t big enough, either. She went to graduate school at CalArts in Los Angeles, where she got to work with experimental, cutting-edge, media-mixing artists from around the world and found her purpose. “I wanted to make a kind of theater that was also experimental,” she said, “and I didn’t see any clear path in Los Angeles.”

But she saw a way back in Pittsburgh. “I thought my work, influenced as it was by these artists around the world in L.A., would be unique in Pittsburgh.”

She was under 30 when she returned to town, full of ambition. She sought out famed Pittsburgh playwright August Wilson and asked him for advice. “I found him at the Crawford Grill in the Hill. He was so wonderfully generous with his listening and his encouragement.”

One person led to another, she said; people saw she was bringing something interesting to town and said they’d give her a shot.

“I got a first grant pretty easily,” she recalls. “I tell young people now that you have to have the courage of your convictions, and you have to deliver something that’s interesting to people. But if you do, you will find the adventurous types who will support you. And I hand it to Pittsburgh for being so awesome.”

Boos’ family moved to Wheeling in 1970 when her father’s work brought the family there. Her parents, Paul and Anna, encouraged her theatrical pursuits. “They encouraged all of us in all of the things that we did,” she emphasized. “There was a sort of unspoken thing, which was we could do absolutely anything, and anything we chose to do was surely the thing we were meant to do. … We were all very different. And were very close.”

Her older brother, Paul, went to law school and became Wheeling’s city solicitor. He died at age 45 of blood cancer. One sister lives in San Diego and recently retired from a 30-year career as an engineer at a public radio station. Her younger sister works in Manhattan at high-level technical writing and branding. “She helps companies use language to move mountains.”

Ye Olde Alpha was a favorite Wheeling hangout; so was Oglebay Park. “Growing up in Clinton Hills, we walked over the power line to Oglebay, and we lived at the pool in the summer. It was like our backyard.” She went to Capitol Music Hall for the symphony and the jamboree, hearing such luminaries as Emmylou Harris, Arlo Guthrie, Billy Joel and George Jones.

Boos spent some time in public school before enrolling in Mount de Chantal Academy. Like many alumnae, she mourns the loss of the school and the razing of the old building in 2011. “It was just so painful,” she said. When she’s in Wheeling, she still visits the little cemetery where sisters are buried, and where teacher-nuns encouraged her to work hard and think hard.

“My work in the theater comes from my love of literature. That’s why I adapt books into plays, into three dimensions,” as she did with Quantum’s fall production, Chatterton, which she adapted from the book by Peter Ackroyd and directed.

“That all is directly from Sister Rita. She would encourage a young person as if you were a 35-year-old to think so deeply.” Boos, who sang in choirs there, was also inspired by the physical spaces, “the way music lived at Mount de Chantal, with the wing of practice rooms and the music hall and the choirs and the sophistication. I don’t think that exists very much in education.”

She also remembers “sister Cecilia in full habit,” who grew orange trees in a grand skylit space. “You just were in an environment that encouraged your creativity and your intellectual development, and a way of looking at other people that was based in respect and the greatest possible interpretation of the other person’s abilities.”

Cultivating that regard for other human beings is one purpose of theater. As Quantum’s mission page says, “We want to move people with our experiments. We believe that the theater has limitless ability to put people in motion. If any art can transform, open a mind, the theater can. … We’re looking for truthfulness, knowing that the word is a slippery slope.”

That’s one reason E.M. Lewis’ play is a perfect match for Quantum. At this production, like others around the country, audience members are invited to share some of their experiences with guns in a 15-minute talkback after the show, and then possibly to open conversation with others in their lives. 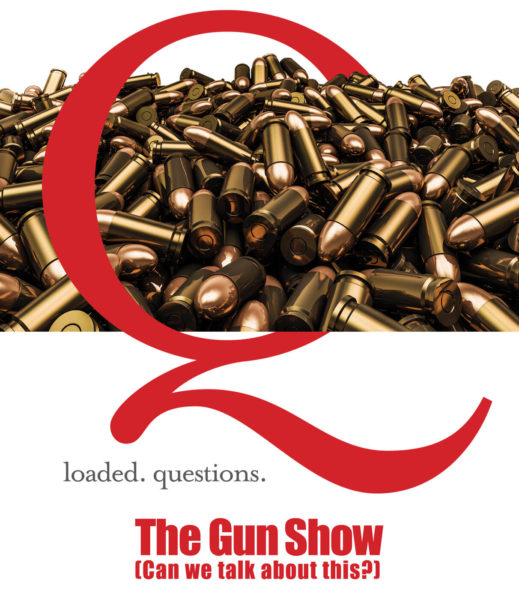 Just as Boos sees theatrical potential in the various spaces that Quantum repurposes as a stage, she sees individual potential in everyone and their encounters with art.

“I want people to engage and be open to what the ideas that come to you in an emotional and poetic way through art can do for you, right? It happens to me all the time,” she says. “I want people to feel that that potential exists if they go out there. And maybe the theater I’m designing is meant to make that point, demand more of them, by virtue of its form.”

In a traditional theater experience, she says, “It’s very easy to go to the velvet seat and the lights come down and they go up on the stage and you know where you’re going to have dinner. It’s very deadening to me … So I upend those circumstances to remove those possibilities and leave you hanging in a less comfortable, more uncertain position where more is required of you.” People are more likely to come out a little changed on the other side of that kind of experience, she says.

Towngate has a long history of such nurturing. It’s rare for a city of Wheeling’s size to have a theater of Towngate’s quality and longevity, she says. “It’s pretty extraordinary in the number of people who are such true and accomplished theater people who have not just cycled through, but stayed and really put a mark” on the theater, she said. “Bettie Steele and Kathleen Howland and Terry Gurley and Tim Cogan and so many people. Tom Stobart as a writer.”

She saw many who carry on the tradition last summer at a memorial for the late Hal O’Leary. She says that level and longevity of commitment, unusual for a community theater, “goes on today because it’s in the DNA of the place proceeding from Hal. He built a community that realized its own potential through the example that he set. I don’t think it’s going to stop.”

Last fall, she served as the guest curator for the Pittsburgh Cultural Trust’s International Festival of Firsts, a several-month, multimedia showcase of performing and studio arts from all over the world. Each piece must be a kind of “first” — a regional, U.S. or world premiere — to qualify. Boos spent a year and a half traveling the world scouting art for it. 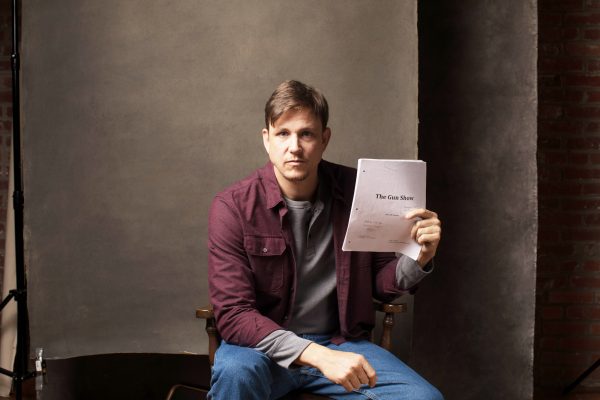 Andrew Smith in “The Gun Show (Can we talk about this?)”

The performance of “The Gun Show” at Towngate will begin at 8 p.m. Monday, Feb. 25. The performance is free, and no reservations will be taken. The show runs about an hour, and seats are first-come, first-served. More information is available at 304-233-0820 or at the theater’s website.

Pittsburgh performances of “The Gun Show (Can we talk about this?)” continue through March 3. For information, visit Quantum Theatre’s website.

• Laura Lynn Brown is a writer, editor and teacher living in Pittsburgh after 20 years working at an Arkansas newspaper. A native of Bridgeport, she worked briefly for the Wheeling News-Register and The Times Leader and earned an MFA in nonfiction writing from the University of Pittsburgh, where she now teaches composition part-time. Her first book is “Everything That Makes You Mom: A Bouquet of Memories.” She grew up riding the bus to Wheeling, eating at Hamburger Inn and Pappas Beef House, perusing the office supplies at Murphy’s Five and Ten, going to plays at Towngate Theater and finding treasures at Anne’s Corner on the Market.