Search
Home
Happenings
“Whenever a group of classical guitarists congregate, you can be sure you will see them filing away and comparing their nails.” For John Marcel Williams, this is a not too uncommon sight. Williams is the classical guitarist who will join music director John Devlin and the Wheeling Symphony in their performance Friday, Oct. 11, at The Capitol Theatre. 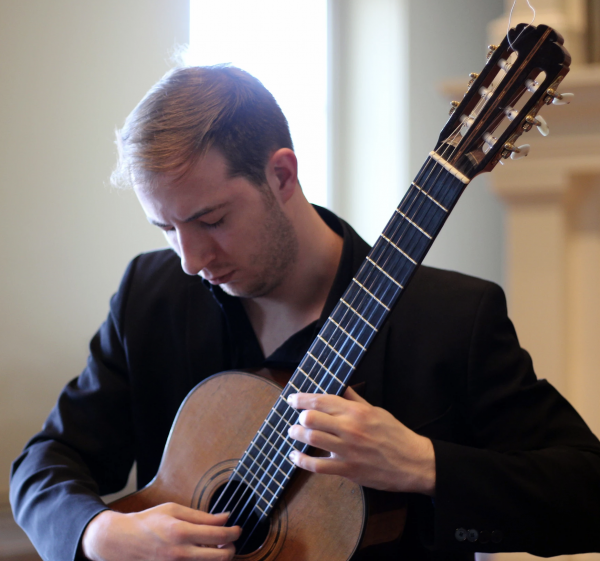 Williams shared this adage of digital keratin care as he prepares to play Elmer Bernstein’s Concerto for Guitar and Orchestra. To get the desired tone out of the instrument requires meticulously maintained nails. Slight variations in nail shape and angle can drastically affect the sound.

It took Williams a lot of practice and experimentation in his early playing days to refine his nail regime. To this day, he still uses fine-grain sandpaper in finishing the process and achieving the smoothness he needs. “I’ve gotten used to it, but I’m sure others in music school or elsewhere find it a little amusing at first,” he said.

Williams has also tried fake nails. One method involves dissecting ping pong balls, shaping the scraps of celluloid, and then gluing them on. “It’s one of the more popular fake nail methods,” he said, “because they sound great!”

If you get a seat right down front Friday night or employ your opera glasses, you might notice that it is only the nails on Williams’ right hand — his plucking hand — that are long (and well sanded). The nails on a classical guitarist’s fretboard hand must be kept short to depress the strings along the neck of the guitar.

Aside from getting his nails in order, over the past weeks and months, Williams has been practicing the concerto amid a robust schedule of teaching and performing in and around Philadelphia.

“I started learning the piece in mid-July, and this week I’m going to start practicing it with a pianist at Curtis who will play the reduction of the orchestra part,” he said earlier. “It helps to practice this way to get a feel for the cues and entrances of my part.”

That’s the Curtis Institute of Music in Philadelphia. Williams is currently pursuing a post-graduate diploma degree there. “This degree is less coursework and more focused on lessons with my guitar teachers, performing and chamber music. When I graduate from Curtis,” he said, “I don’t have plans to go back to school for a few years, and I’ll just be performing and teaching as much as I can.”

And performing and teaching he certainly has been. Williams corresponded with me for this article while riding trains around Philly and its environs, squeezing in a few paragraphs here and there on his iPad while chugging along to his next engagement. 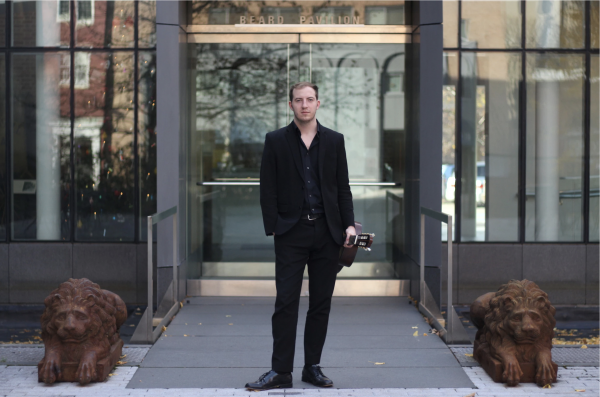 FROM WINTERSVILLE TO THE WORLD AND BACK AGAIN

Before the city of brotherly love, Williams lived in Baltimore, where he did his undergraduate studies at the Peabody Institute. Before that, he lived just up the road in Wintersville, Ohio, where he was born and raised. 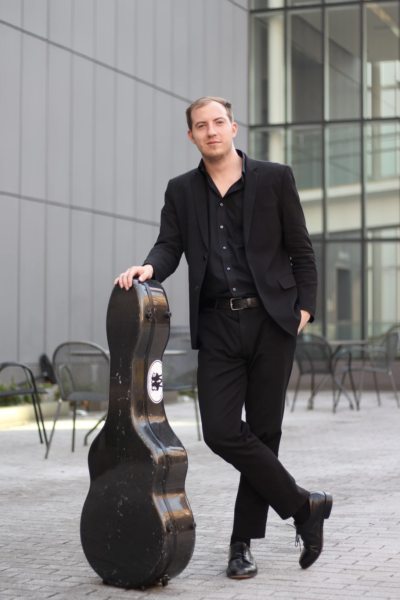 Music pervaded the household. “My parents studied piano, and classical music was a big part of my family growing up. I tried piano for a bit when I was 6 or 7 but never stuck with it. My older sister was learning guitar, and that’s probably why I started when I was 10. I’m not sure when I decided to pursue it seriously, but I think I was committed to it pretty young,” he said. “I remember going to a concert by a Spanish guitar quartet, The Romeros, shortly after I began learning.”

His first teacher was guitarist Aaron Carey. “At the time, it was difficult to find a teacher for classical guitar in the area,” Williams said. “Shortly after I started playing, the local music center [the Center of Music and Arts in Wintersville] advertised a teacher offering classical guitar lessons, and I found him, so it was really perfect timing. I was quite young, but I always remember being so excited for our lessons every week and eager to show him my progress.”

Homeschooled in his early years, Williams then attended Harding Middle School for eighth grade and graduated from Steubenville High School. In 2011, before starting his studies at the Peabody Conservatory, he was awarded a $1,000 Rachael Worby Scholarship, bestowed upon promising high school seniors who are continuing their music studies. The scholarship was endowed in the name of the WSO former music director.

“I was very honored and grateful to receive this award, and it was extremely helpful with my college tuition. Music school, like anything else, is expensive, so I’m thankful to have had local scholarship opportunities like the Rachel Worby Scholarship that were able to help myself and other musicians in the Ohio Valley,” he said.

Since those early days, classical guitar has taken Williams all over the world. One memorable trip was to a festival in Panama; he was invited to play concerts and teach masterclasses. Just one potential snag: most of the students did not speak English, and his “Spanish is basically non-existent.”

However, Williams found that he could go back and forth with the students pretty easily: “I remember one class when there was nobody who could translate, so I was a little nervous about how to go about the class. But surprisingly, it was so easy that I almost forgot the language barrier. The student would play the piece, and I would share my thoughts and ideas with almost no confusion.”

AMERICAN MUSIC, DANCE AND A SURPRISE

This Friday, Wheeling will get the chance to take in Williams’ masterful playing under the direction of newly minted music director John Devlin.

“[John Marcel Williams] and I were at school only a few miles apart,” Devlin said. “I was at the University of Maryland, and he was just up I-95 at the Peabody Institute in Baltimore. Wheeling will love hearing him perform, especially as a guitarist — an instrument not often heard with a symphony orchestra.” 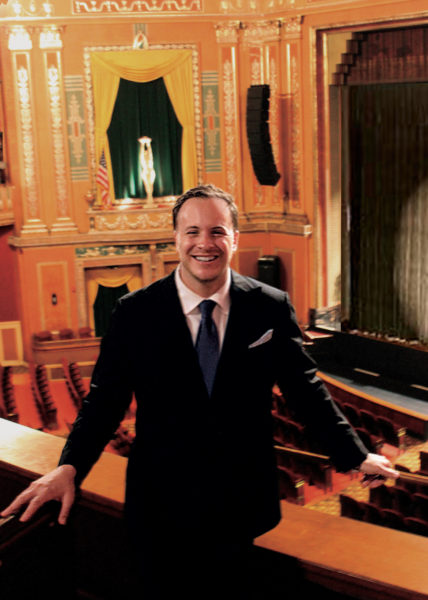 Devlin selected the Bernstein guitar concerto for Friday night because it uniquely fits the program design of “all-American music, with each piece inspired by the dance.”

The concerto “combines those two elements in brilliant ways,” Devil said, “and John was the perfect soloist to present this concerto by Elmer Bernstein (known best for composing scores to movies such as The Magnificent Seven, Ghostbusters, Animal House and the Broadway show Thoroughly Modern Millie). The element of having a guitar also connects in a special way to our ‘surprise’ element for this concert — but you’ll have to join us at the Capitol to find out more about that!”

The prominence of contemporary American music on the program is intentional. It’s part of Devlin’s vision for the Symphony: “During my tenure at the WSO, one of my goals will be for the orchestra to become known for helping the great American music of the last 100 years thrive and become part of the true classical canon. For too long, the music of Broadway, Hollywood and jazz has been thought to be outside of true ‘masterworks’ repertoire.

“We are going to support these genres in big ways and blur the lines between Pops and Masterworks. You can see that happening already with pieces on our first program: one is inspired by Superman, another is from the musical Carousel, and then West Side Story is transcendent — creating a legend on the stage and on the screen. Each composer is American and lived in the 20th and 21st centuries. I view this type of commitment as critical for American orchestras and American music,” Devlin said.

Before the downbeat Friday, Devlin and Williams will rehearse the concerto with the orchestra. “We will have a few hours to rehearse the day before the concert and, hopefully, it goes smoothly!” Williams said. Many weeks of practice have been hammered out by players, soloist and conductor alike leading up to the performance.

During all those hours of preparation, for this and every concert, Williams must make choices of interpretation. He must summon the music from the page in a way that feels true.

“One of the biggest challenges is trying to take a piece of music and do the composer justice as well as making it you’re own. It’s a bit of everything,” he said, “though with some music, you can get away with more personal taste than other music. I guess I try to keep the character of the music intact when I make musical choices. The grand, dignified character of Baroque music will lead to me to be more mindful of getting too careless with vibrato and rhythmic freedom when playing Bach, for example, whereas if I’m playing 19th-century romantic music, then I’ll probably be inclined to have more fun with these things.”

WHAT’S IN A NAME?

When I accepted this story assignment and saw the three-part name of my subject, I grimaced. Oh, here we go, a profile of a real prima donna who thinks two names aren’t good enough for him. Then I really took in his first and last name and wondered whether he wasn’t just trying to set himself apart from a certain writer of music for a few little movies called Star Wars — John Williams.

“Oh, trust me, if the composer was the only one I had to think about, that would be great,” John (Marcel) Williams said. “Actually, there is another John Williams, ha ha. He is Australian and the most famous classical guitarist alive today. … So, he is the biggest reason I decided it’s best to use my middle name.”

Williams hopes to make a career of the guitar through a mix of teaching and performing. Off stage lately, he’s been enjoying listening to string quartets and Debussy’s chamber music. He’s also a fan of The Beatles, Bob Dylan and (a favorite of mine, too) James Taylor. When he gets the chance, watching NBA and NFL games is on the agenda. And there are 10 book recommendations on backlog from his girlfriend.

While he’s back in the Ohio Valley to perform, Williams said he’ll get to visit the family dog, Blizzard — “a bichon/poodle mix who thinks he’s a guard dog and takes it very seriously.” Finally, Williams told me, “I really like to get out of the city and see some trees for a change, that’s very refreshing.”

You can see John Marcel Williams, John Devlin and the Wheeling Symphony Orchestra at 7:30 p.m. Friday, Oct. 11, at The Capitol Theatre. The program includes: Michael Daugherty, Red Cape Tango from Metropolis Symphony; Elmer Bernstein, Concerto for Guitar and Orchestra; and Leonard Bernstein, Symphonic Dances from West Side Story. Hear more about the music at a free Concert Talk at 6:30 p.m. in The Capitol Ballroom. Concert tickets are available online, by phone at 304-232-6191, via email or in person at 1025 Main St., Suite 811, Wheeling.

• Ryan Norman hails from a suburb of Cleveland and earned an English degree at Wheeling Jesuit University. He lives in East Wheeling where you might find him listening to Gustav Mahler or Keith Jarrett, reading David Foster Wallace or Dave Eggers, and thinking along with Martin Heidegger and Roger Scruton. Ryan is also a chorister at St. Matthew’s Episcopal Church and a member of The Prosers, a group that performs original poetry and prose at Towngate Theatre.