A 9/11 Story: The Day Twin Tower Metal Came to the Ohio Valley

Lee Chottiner
1
Editor’s note: This story is posted via Weelunk’s partnership with Dateline: Wheeling and originally appeared there.
For more great Wheeling posts from Lee, check out datelinewheeling.com.
This is a 9/11 story, though the people involved were not at Ground Zero.

The story didn’t even happen on the day of the attack.

But everyone who recalls it saw first hand, without the filter of a TV camera or computer screen, the destructive force those aircraft unleashed upon the Twin Towers of the World Trade Center, and the thousands of victims who were trapped inside.

They will likely never forget what they saw.

Carter Strauss certainly won’t. The president of Strauss Industries, in Wheeling, recalls the day train gondolas hauling the first of 25,000 tons of violently “collapsed” structural steel from the towers rolled into the company’s scrap processing yard in Weirton.

It was about a year after the attacks, and Strauss Industries had recently purchased the steel from a New Jersey demolition company. He and other Strauss officials went out to see it. Gondolas filled with the rest of the tonnage would arrive at the yard over the coming months.

But it was those first carloads that Strauss recalled in detail:

“We climbed over the side of this rail car to look at these beams,” he said. “We couldn’t even believe the size — the structural size — of these beams, these massive beams [that] were put into these buildings, that only lost their integrity because the heat from the jet fuel caused them to weaken and caused the collapse of the buildings. 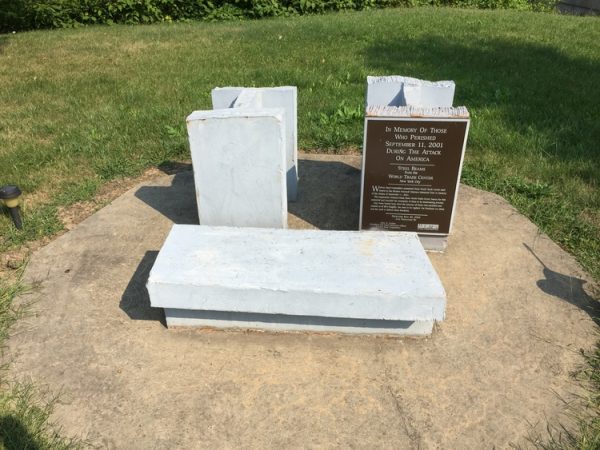 This 9/11 memorial bench at the Brooke-Hancock Veterans Park was made with steel from the World Trade Center.

The decision to purchase and process the beams was a strictly business one, Strauss said.

“We bought them because we were in the scrap metal business,” he said. “This was not [because] they have intrinsic value to us; we bought them, we prepared them, we sold them to mills. We didn’t expect them to draw the interest level they did.”

But word of the shipment did leak out, and reaction poured in from around the valley.

“We started getting calls from, as you can imagine, a number of organizations, as well as individuals, who wanted to have small pieces of the beams,” Strauss said. “Well, we’re not in the business of doing that, [but] we did give some small pieces to some of the local organizations as well as some of the military organizations for memorials. We also provided a couple larger pieces of beam that were made into a memorial bench at the Brooke-Hancock Veterans Memorial up on Route 2. We had a dedication there by U.S. Rep. Alan Mollohan and a couple other local politicians. It stands there today.”

As for the rest of the tonnage, “it was primarily shipped to electric furnace mills on the Ohio and Mississippi rivers and was melted down and made into new beams and new products for the automotive, appliance and construction industries,” Strauss said. “You might have a washer in your house, and maybe part of it was part of a beam. Who’s to say?”

But Strauss, himself a Navy Seabee veteran who served in Vietnam, never forgot what he saw that day in the freight yard.

“When you looked at the beams, the emotional part was that these people had absolutely no chance because they were pulverized,” he lamented. “You should say dust to dust, but there was nothing left of these people when these beams collapsed on them.”