A Seat of Frontier Justice: The Old West Liberty Courthouse

I recently spent the day in the little town of West Liberty. I have been fascinated by the history of the hilltop village since my undergraduate days at West Liberty University, but back then I had no idea just how important West Liberty was to the early frontier people and the settling of the American West. Among the fascinating historical sites I visited, I was most captivated by the Old West Liberty Courthouse. 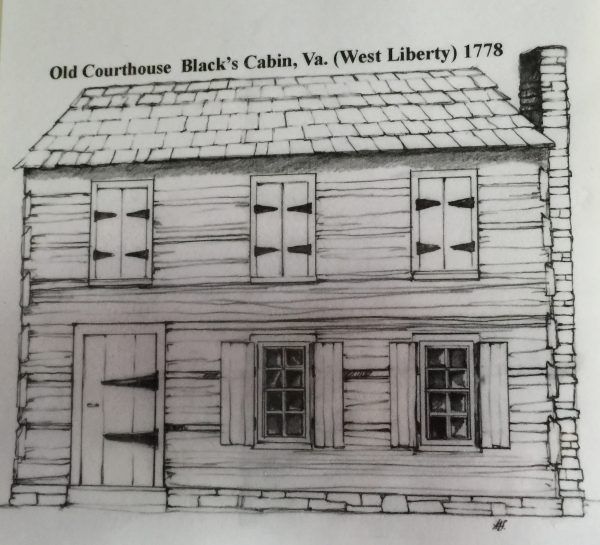 A drawing of the way the courthouse looked not long after construction.

Settlers began to arrive in the Upper Ohio Valley in the 1700s, which was already well inhabited by Native Americans. For protection, the Europeans built forts and other strongholds in strategic locations designed to both warn them of approaching insurgents and to offer optimum defense. It is no wonder, then, that a man named Adam Black chose to erect a cabin at the highest point in the area in 1769. Black was an agent for a Berkeley County, Va., planter named Abraham Van Metre. Eventually, a little town grew up around his dwelling, which became known as Black’s Cabin, Virginia.

As the Revolutionary War got under way, the residents of Black’s Cabin began to think more about freedom, and in 1777 the town was renamed West Liberty. By the time the courthouse was erected near Black’s log cabin in 1778-1779, West Liberty was a bustling Virginia town in the Appalachian foothills near the Pennsylvania state line. To put its relevance into perspective, in 1803 the Pittsburg Gazette refers to Wheeling as a “thriving little river town 12 miles southwest of West Liberty.”

On March 6, 1777, Van Metre purchased two acres of land at the head of Short Creek for the erection of the Ohio County courthouse by order of the Virginia Legislature. Two years later, the West Liberty Courthouse became the first seat of justice in the Mississippi watershed. Given the size of Ohio County during this era, there was a great need for an official site to carry out legal transactions. 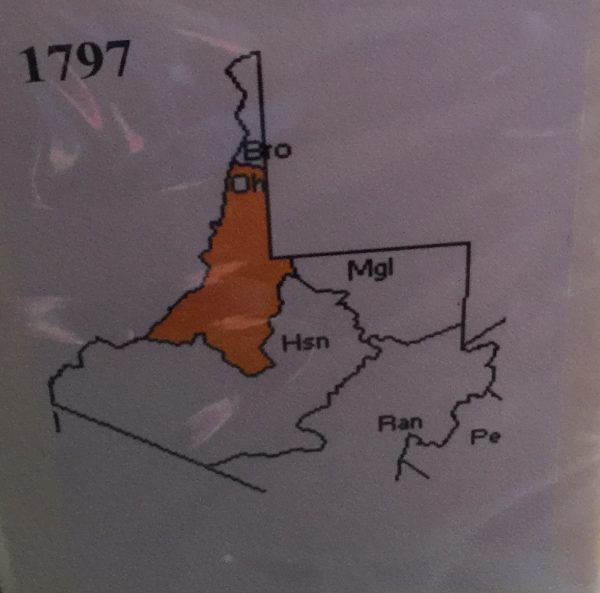 Ohio County was once incredibly large, covering much more area than it does today.

Fort Van Metre, which protected the West Liberty Courthouse and the surrounding town, was commanded by a figure familiar to most Ohio Valley residents: Major Samuel McColloch. A plaque marks the spot of his famous leap off of Wheeling Hill along National Road.

The West Liberty Courthouse served the people of the upper Ohio Valley for 20 years until Wheeling became the seat of Ohio County in 1797. In the years that followed, the courthouse was used for a number of purposes, including a mill and a residence for many years. Thankfully for those of us who love history, the original courthouse was not torn down. Instead, clapboard walls were built around the original courthouse, which preserved the structure. 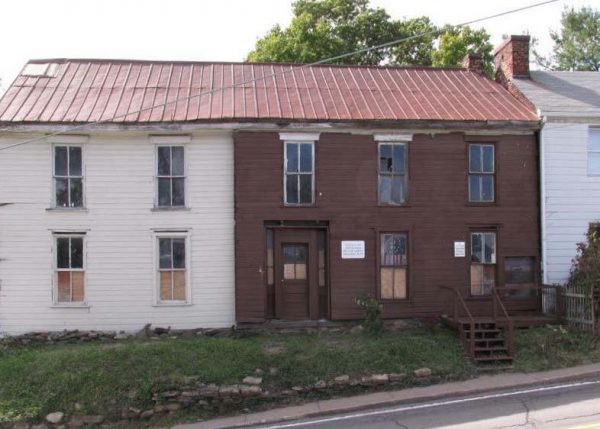 The property was purchased by Jeanne V. and the late Robert W. Schramm to preserve its integrity as a historical site, which allows visitors to get a closer look at the intricate wood working that makes it possible for a building so old to remain standing. I wasn’t sure what to expect as I followed Mrs. Schramm up the creaking steps and into the front room, which is still under improvement. The walls hold framed documents that record the history of the courthouse and the town of West Liberty.

Then, as I turned the corner and walked into what would have been the courtroom, I experienced incredible awe. The mid-afternoon light filtered through the windows and onto wooden benches. Added by the Schramms to allow visitors to experience what court would have been like in days gone by, these benches also give lecturers the opportunity to speak to audiences about the site’s significance to local, state, and national history.

Before he died, Professor Schramm had collected historical artifacts from the time period to display at the front of the courtroom, and an old gun hangs on the wall in the area that would have been the jail. At the risk of sounding cliché, it honestly felt like I had stepped back in time when my own ancestors, who lived in Liberty District during the 1700s, might have walked those same floors. 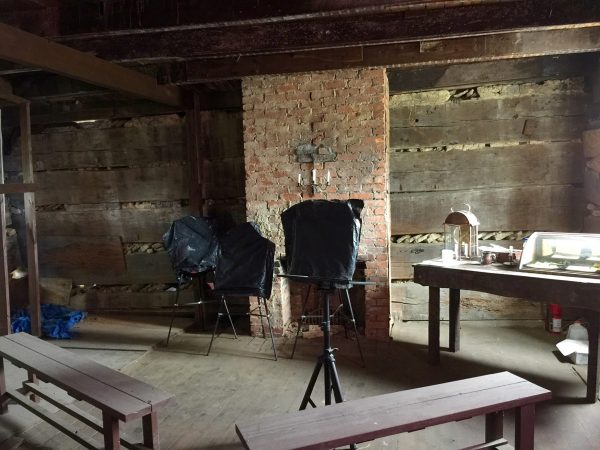 The courtroom from the inside.

Mrs. Schramm explained the precise ways the wooden planks had to be measured and put together as decreed by the Virginia Legislature. Early court records from 1777 describe these requirements in detail: “A diamond-cornered house of dimensions 22 by 18 feet in the clear, one story and one-half high, a floor above and below of hard sawn plank ten joists in the upper floor, nine or ten feet high in the lower story.”

For visitors who wish to simply look at the old structure and not make an appointment for a tour, the Schramms constructed a viewing area of a square of one of the courthouse walls that is covered in a thick plastic sheet. 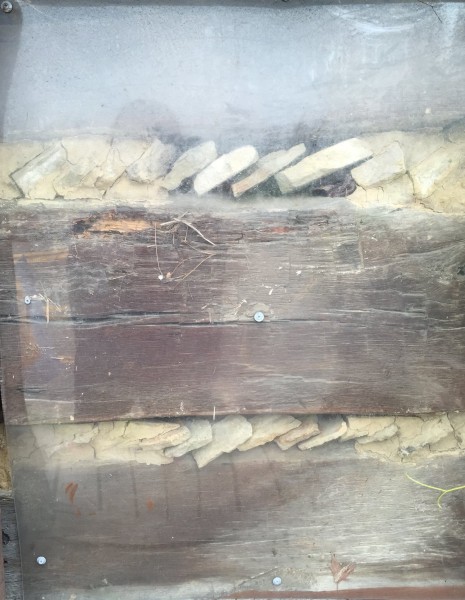 The Old West Liberty Courthouse is located at 1140 Van Meter Way in West Liberty, W. Va. It is right next to the historic West Liberty Cemetery, which is home to the graves of many veterans of the American Revolutionary War and founders of the town of West Liberty. Many of the headstones have recently been restored by the West Liberty Historical Society.

I encourage anyone who is fascinated by the history of the Upper Ohio Valley to visit both the courthouse and the cemetery. Long before St. Louis took the title, our region was the Gateway to the West. The settlers who came to this area were brave, defiant people who sought freedom. Many of them walked the floors of a courthouse built of white oak beams on a sandstone foundation decades before George Washington became president. 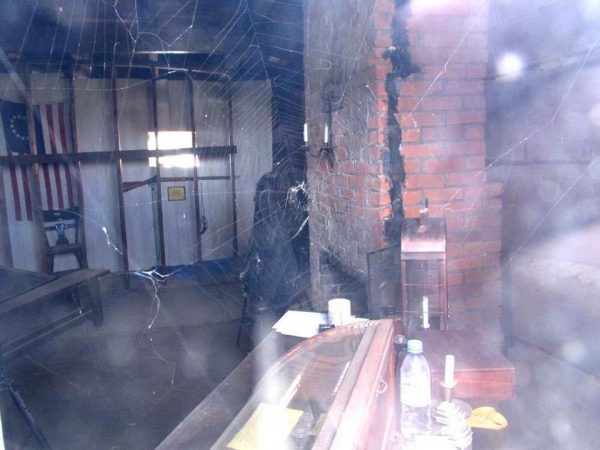 A view of the courtroom from a front deck cutaway. (Photo courtesy of Earl Nicodemus)

By efforts of early townspeople and the Schramms, the Old West Liberty Courthouse remains the oldest still-standing structure in the Upper Ohio Valley and an invaluable part of early European American history.

Featured image by Ryan Stanton via Flickr. Modified by Rochambeau.