Years ago, nearly 46 to be more exact, I was a freshman in high school. I was 14 1/2 years old, it was a Saturday morning, dawn was shining on the still sleepy city of Richmond, (East) Va., and I was heading to the Greyhound bus terminal, about a half-hour leisurely walk from my house located in the hip Fan District. As a 14-and-1/2-year-old, I felt I was responsible enough to do some alone traveling.

It was decided after much discussion with my mother that I was at last old enough to travel on my own. My destination — Washington, D.C., the nation’s capital. More specifically, the collective museums of the Smithsonian Institution of which I had been a long and faithful member, receiving monthly issues of National Geographic Magazine — a gift from my grandparents on my father’s side. After a half day visiting the Smithsonian Museums, the plan was to spend the rest of the day at the Museum of Natural History.

I had been to these museums before — but always with my mother. She was a serial chain smoker — she only needed a single match each day to ignite her first cigarette from which she daisy-chained her next cigarette and her next and her next. My mother usually smoked five packs of cigarettes a day. On the weekends, it often exceeded six packs a day. All of this smoking took its toll — she needed frequent breaks to sit, catch her breath and to light up another needed cigarette. With my mother in tow, this severely slowed down the museum visiting pace and never allowed me to set my own tempo, resulting in an unfortunate situation that many interesting chambers and floors of these noble museums remained forever elusive to each visit. I felt as long as my mother was with me, much of the Washington, D.C., museum areas were permanently off limits to me. I used other excuses than this to save her feelings, but that was most of the real reason for wanting to travel alone.

My personal day was all planned out — leave Richmond, Va., on the 6:45 a.m. Greyhound bus, arrive in Washington just before 9:45 a.m., walk to the Smithsonian area by 10 a.m. for the opening of the doors and start my day of visiting museums, return to the bus station at 5:30 p.m. to catch the last bus to Richmond at 6 p.m. and be home by 10 p.m. at the latest.

I had four peanut butter and jam sandwiches (two for lunch and two for dinner) carefully wrapped in wax paper neatly stacked in a shoulder satchel along with a pack of gum, two Baby Ruth candy bars, a notebook, pencils, and pens of various colors to take notes and draw pictures. I imagined I was more of an artist than I was, but maybe I would become inspired at the museums — I needed to be prepared for anything.

Walking to the Richmond Greyhound bus terminal, I was very conscious of what I thought were two very conspicuous bulges of 12 $1 bills in each of my front pockets. I literally had $24 burning holes in my pockets. The grand sum of $11 was going to buy the round-trip Richmond-to-Washington and back-to-Richmond Greyhound bus tickets. This left $13 for emergencies (I was worried about somehow mislaying my return ticket and being stuck in the Washington, D.C., bus terminal for the night) and a few dollars in case something in one of the museum gift shops just had to come back to Richmond with me.

I had it all planned, every contingency prepared for — but I never imagined what I would find waiting for me in the gift shop of the Greyhound Richmond bus terminal would change my life forever.

I had 15 minutes before my Washington-bound bus was to leave, so I wandered around the bus terminal snack and gift shop keeping one eye on my watch and the other eye looking over the racks of sugary snacks and the rotating racks of paperback novels. I had no interest in westerns and romance novels that populated these racks — but there was something out of place, a cover of a paperback book that stood out among the images of shirtless sweaty cowboys and breathless women in unlaced Victorian gowns. 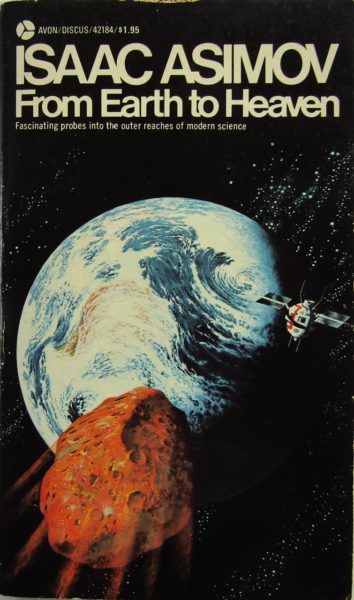 The paperback book was titled From Earth to Heaven by Isaac Asimov — as a science geek, I knew that name. Isaac Asimov was a science writer, and I had read a few articles by him and was always impressed with the scope and range of his topics. Isaac Asimov wrote about science topics in such a way that he synthesized complex topics and made them accessible and brought these topics to the people. In the back of my mind, I somehow knew that Asimov also wrote science fiction. Not wanting to read a goofy tale of laser-gun wielding spacemen fighting off bug-eyed invading monsters from Venus, my gaze passed over the out-of-place book cover and returned to the racks of tempting snacks.

I left the snack and gift shop, hopped on my Washington, D.C.,-labeled bus of mostly empty seats and took the frontmost seat to the right of the driver’s chair with six or so minutes to spare. I closed my eyes and settled into the seat. The image of that paperback book cover materialized in my mind … the cover showed an artist’s view of a cloudy-weather swathed Earth in a gibbous phase as if seen from a distant vantage point above the low Earth orbits of most satellites. The vantage point perspective of the artist of the paperback cover was as if they were looking at the Earth from the vantage perspective of weather satellites (this idea is enhanced because there was an image of a weather satellite at the right-hand edge of the middle of the book cover) tens of thousands of miles out into space. From the bottom left of the book cover zoomed a crater-pocked asteroid toward, at, or past the Earth — you could not tell, but some part of you felt it was not going to miss the Earth, and that caused a slight tinge of dread.

I sat there with my eyes closed — not as much relaxed now. What if that book with the sciency cover by Isaac Asimov were NOT a science fiction book of alien bug-eyed monsters duking it out with a noble band of space cadets from the Earth trying to save the world and all that live there from certain enslavement and eventual destruction from the star kingdom of GaZok? What IF it were a book of his science writing somehow mixed in with the westerns and romance novels? Would it be there when I got back from my trip? What if it were gone forever? What if it were the only one I would ever see? Had I imagined it?

The bus driver came onto the bus and was looking at a piece of paper — the trip manifest count no doubt. He was slowly counting heads, wrote something and was climbing into his chair. I sprang out of my seat, rushed past the driver, ran down the several steps and spun, and looking at the amused driver, all I could say was, “Wait right here,” and took off into the bus terminal at full speed. Ran over to the paperback book rack that was being slowly spun by a shopper. I scanned the rack, no book, more books came into view, still, no book, with raw agony the rate of spin slowed and slowed to a stop — still no book. The shopper held the rack with his hand. The rack was not moving, and I did not see the book. Surely it had not been sold in the few minutes I was on the bus? I ran around to the back side of the book rack and, as I did, it started to spin again. There it was — I reached for it but I missed it, and it was now gone onto the other side. I ran back around the other way hoping to head it off and ran into the man spinning the rack. “Watch it kid.” I said I was sorry and reached for the Book, held it in my hands and read the tiny white print under the title: “Fascinating probes into the outer reaches of modern science.” I opened the front few pages and read “First Discus Printing, July 1972.” That was only last year! I randomly opened the book and on the top of page 172, saw a table titled “Table 30 — The Masses of Subatomic Particles.” There were the masses of the muon, proton and neutron in units of the mass of the electron out to two decimal places!!!! 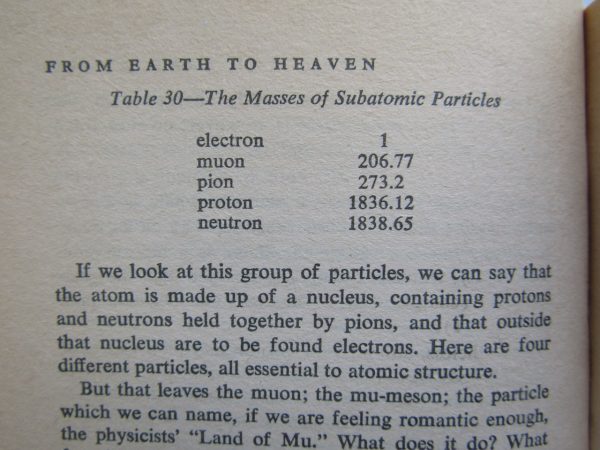 The fuzzy speakers came on with another announcement — “zzzzzssst   Hew   Kid!!   Th     Bus   is   leaven   fer   Warshington   WE  GOT   TA   GO   psssst.” I paid at the counter, and for the first time, did not wait for the change or a bag, and ran to the bus, wheels already slowly turning, the door open. I jumped on. “He’s here” the driver said into the CB microphone, and a ripple of clapping came from unseen passengers around the bus. The driver asked, “Did you find what you left inside?” I answered, “Yes Sir.” He smiled — it was a different time.

I only remember three things about my first solo trip to Washington, D.C. Firstly: I had a total of six hours to read From Earth to Heaven, a collection of 17 science essays written in the mid-1960s for The Magazine of Fantasy and Science Fiction. The essays were in order from February 1965 to June 1966. Secondly: I realized I wanted to do what Isaac Asimov did. I wanted to bring science alive to the masses; I wanted to educate people about science and make it fun. Thirdly: someday when I knew enough science, I wanted to start writing a science essay series, like Isaac Asimov, and when I get to 17, publish them in a book.

So gentle readers, this is the first science essay, inspired by the science essays of Isaac Asimov over half a century ago. Please join me “Moonthly” (not monthly), but, every Lunar First Quarter, as we explore the world of science and humanity from another vantage point — “A View from the Moon.” 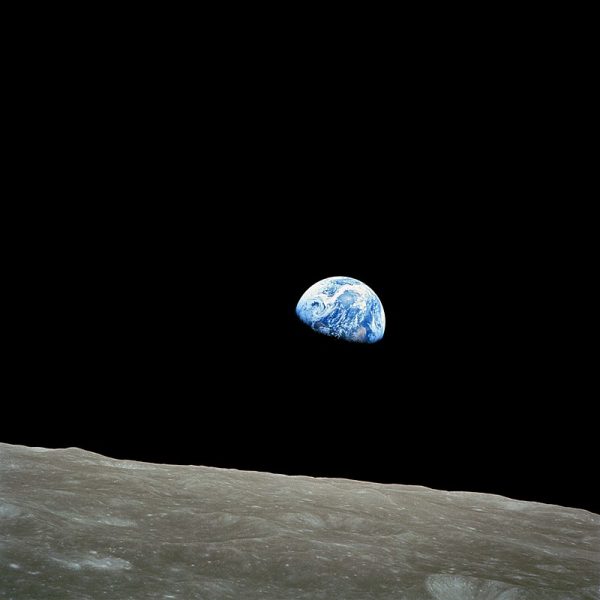 I hope that you gentle readers will take the time to contact me, Robert@smartcenter.org, and let me know if there is a science topic you would like me to cover. In the subject heading, please type the phrase, “A View from the Moon” and the date. I look forward to a long and fruitful partnership with you, the gentle readers of Weelunk.

• Robert E. Strong received a bachelor of arts degree in physics with minors in mathematics and philosophy and has a master’s degree in space studies. Robert taught secondary school math and science in Benin, West Africa, (Peace Corps volunteer) and in American Samoa. He worked as a physicist in a research laboratory. Robert is president of the Near Earth Object Foundation dedicated to educating the general public about Near Earth Objects and providing public StarWatches. Robert and his wife Libby started the SMART-Center in 1994, a hub for science- and math-related activities for area schools, educators and the community. They also operate the SMART Centre Market — an interactive hands-on science store in Wheeling, featuring Orion telescopes, science toys and Kirke’s ice cream.