(Editor’s note: Last week we read about the Big Idea (Part 1). Today, Robert E. Strong recaps that article and moves on to Part 2.)

As a recap from Big Idea: The Fractional Gravity Experiment (Part 1):

In Part 1 we said that Sir Isaac Newton was the first to quantify gravity. This was only because three generations previously, Galileo Galilei had elevated the notions of gravity from the superstitious pseudoscientific realm of Aristotelian beliefs into the true scientific age of observation, experimentation and data collection. A future set of essays will outline the contributions of the true polymath Galileo, often known as the father of:

For this essay, suffice it to say that when Isaac Newton is quoted as saying, “If I have seen further it is by standing on the shoulders of Giants,” he was referring to Galileo and everyone in that time knew it. 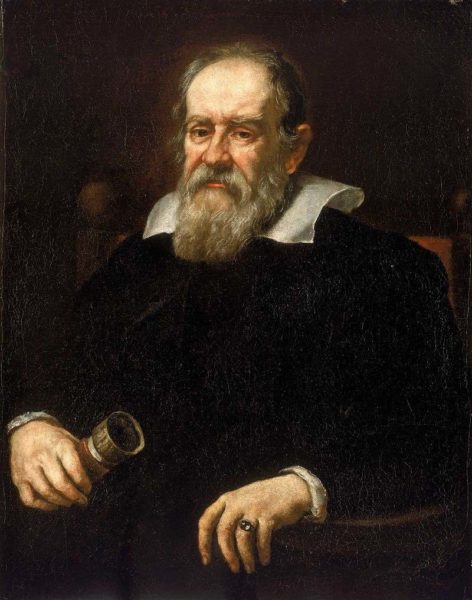 Galileo was one of the first truly empirical scientists to use a systematic approach to observation, experimentation and data collecting rather than philosophical debate to describe the physical world and its phenomena. Galileo was highly interested in motion and the motion due to gravity. Galileo was the first scientist to recognize that time — and not distance — was the independent variable to measure when studying motion. When dropping objects in his motion experiments, Galileo found it difficult to measure both the distance traveled and the time it took to travel that distance. The motion of falling objects on the Earth and their rate of change of motion happen too quickly to easily follow and measure accurately. Try it yourself  —  it is hard to do.

In the typical fashion of Galileo, he solved this problem with a brilliant and elegant solution. Most people would have dropped masses in fluids (water or oil) to slow them down enough to take measurements. Galileo understood that the frictional effects of a mass passing through a dense fluid would mask the effects he was looking for. Instead Galileo rolled spheres down inclined planes to “dilute” the accelerating effects of gravity enough to take precise measurements. 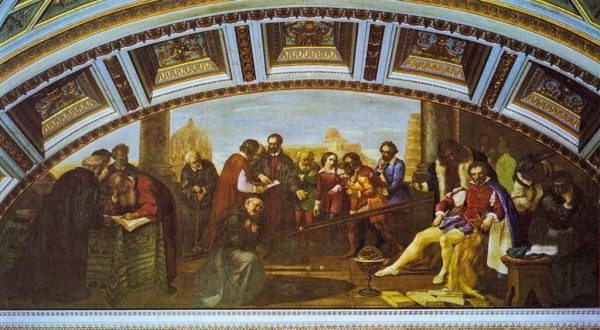 1841 fresco by Giuseppe Bezzuoll showing Galileo (left of center) performing his famous experiment rolling balls down an inclined plane and disproving the physics of Aristotle.

The idea of “diluting” or effectively changing the effects of gravity has always intrigued me. That this can be done so simply is a testament to the experimental genius of Galileo. Another easy gravity related experiment that you can do at home is creating an “artificial gravity” effect. We are used to gravity created by the entire mass of the Earth warping the shape of the space and time around us and creating an acceleration towards its center in our “down” direction. Any acceleration can appear to look like a gravitational acceleration and you can create an artificial gravity effect by simply moving an object in a circle. Acceleration is a change in the direction and or the speed of motion. Swinging a bucket in a circle causes the bucket to constantly change direction and thus to be accelerated creating an inertial form of artificial gravity. Try it.

Go outside (in case you spill the bucket) with a bucket having a handle. Place 5 to 10 cm (2 to 4 inches) of water in the bottom of the bucket. Practice swinging the bucket back and forth a few times to get a feel for the weight and timing. After you feel comfortable doing this add more speed/energy to your swing and cause the swing to go directly over your head, do not slow the swing, follow through with the same speed several times around and then slow the bucket when it is below your shoulders. Note: stopping the bucket’s swing over your head will stop the bucket and its contents accelerating, and Earth’s gravity will take over — make sure you do this outside. With a little experimentation, you will soon find out that the inertially-induced-artificial-gravity-acceleration-fictitious-force increases the faster you swing the bucket and decreases (shown by dumping water on your head) the slower you swing the bucket.

Note: Newton’s 3rd Law “forces always come in pairs equal in magnitude and opposite in direction.” 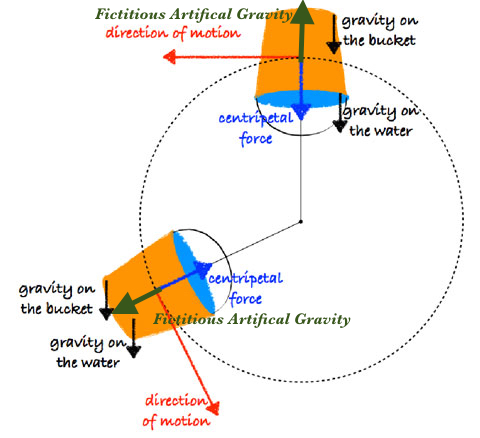 Diagram of the forces (including various “weights”)

But why are we talking about artificial gravity?  Let’s take another step back in time:

During the early-to-mid 1960s when I was in elementary school, I noticed a not-so-subtle change in the definition of the science term “matter.” Matter was defined previously as “anything having weight and taking up space.” Then astronauts and cosmonauts went into orbit around the Earth. In Earth orbit, a person had no effective “weight.” There was still gravity, however in orbital free-fall everything, the people, spacecraft, their food and tools were all falling around the Earth at the same speed and direction thus nothing served as a “stationary surface” to “press” against the people and objects and give them “weight.” Thus, they appear “weightless.” We now refer to this as “microgravity,” “micro-g” or “m-g,” implying that there is always a miniscule amount of accelerations in any environment causing tiny amounts of “weight,” therefore that idea of a millionth (suffix micro- or m-) of an Earth gravity.

Early in the space race, medical doctors were concerned about placing astronauts and cosmonauts into a prolonged weightless environment — could humans survive “weightlessness” when they had evolved in a “weighted” environment on the Earth’s surface? For this reason, a variety of insects, spiders, frogs, fish, mice, rats, guinea pigs, rabbits, tortoises, dogs and primates were sent into various regions of space before humans to test the survivability nature of the space environment. 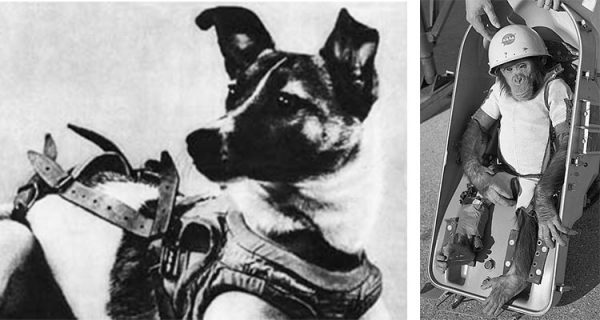 Laika, left, (plucked as a stray from the streets of Moscow) was the first animal to orbit the Earth on Nov. 3, 1957. She died within a few hours of launch from a systems malfunction. Ham was the first hominid launched into space on Jan. 31, 1961. After his space adventure, Ham lived at the National Zoo in Washington, D.C., for 17 years and later at the North Carolina Zoo until his death in 1983.

Space doctors, soon found that as long as humans were in a weightless space environment for short periods of time there were few real effects other than an induced nausea, a cousin of seasickness — termed “space-sickness.” NASA calls this “Space Adaptation Syndrome,” which affects about 45 percent of space travelers and subsides after 72 long hours. Extensive training on the ground, medications and weeding out those persons most susceptible seemed to work for short-term exposures to weightlessness. 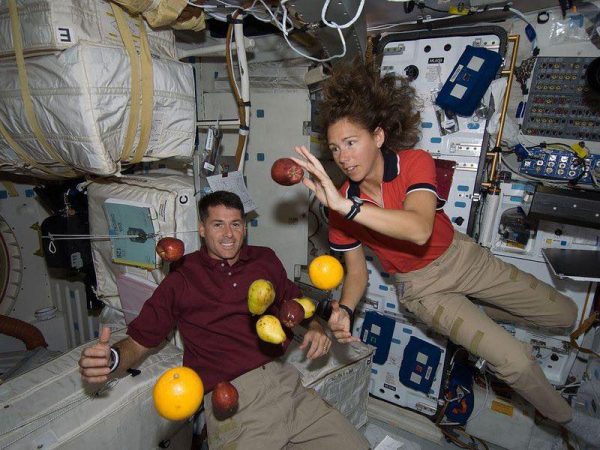 Space doctors soon found that staying in the microgravity environment of space for longer periods than a few days created some physiological problems with humans. Some of the adverse effects of short-term and long-duration microgravity space travel on the human body are:

To get around these microgravity problems for prolonged stays in space, there is an obvious solution. We need some sort of artificial gravity to counter the microgravity environment of space travel. Some sort of spinning wheel-like space station has been envisioned where people would live on the inside, where “up” is toward the center of rotation, and “down” is always the opposite direction — the outside of the wheel’s rim.

Long before humans went to space, speculation and good science fiction had the answer to long duration stays in microgravity space: Artificial Gravity by rotation.

In the spring of 1986, in American Samoa, while teaching an astronomy class to high school students, this topic of artificial gravity came up during a discussion. The thread of the conversation went something like this:

Students: So … if microgravity is bad for humans, why don’t we (NASA) stop orbiting the Earth and go to another planet where the gravity is greater than “near-zero”?

Students: Because Mars has gravity greater than microgravity.

Teacher: But, is the gravity on the surface of Mars enough to stop bone and muscle loss?

Teacher: Why don’t you know?

Students: We don’t know because we don’t know. We have just explored environments of 1.0 gravities  — the Earth with humans and 0.0+ (microgravity) gravities in space.

Teacher: Why don’t we know? (By the way, humans went to the moon’s surface six times but for only a few days each time —  so it really does not count for this conversation.)

Teacher: Why don’t we know?

Students: … (another long pause) … It would be too expensive.  But, Mr. Strong … all the planning and ideas for how humans will be living in space and on other planets depends upon the outcome of this experiment.

Students: An experiment to find out how much gravity people need to stay in space without their bones and muscles constantly weakening.

Students: Yes. We know that 1.0 gravities work very well for humans. We also know that 0.0+ gravities does not work well for humans for very long. We need to do this “Fractional Gravity Experiment” to find out what amount of gravity is just enough. How can anyone talk about the future of humans in space without knowing the answer to the simple question: what is the gravitational threshold for humans permanently living in space?

Teacher: Exactly! You are looking for the “Goldie Locks Gravity” … the amount of gravity that is just right for humans. You seem to grasp and understand THE biggest un-spoken problem of humans in space. Now, how do we solve it?

Students: Well you would have to build a hugely gigantic spinning space station like the one in the movie 2001 only maybe bigger to do this “Fractional Gravity Experiment”.

Teacher: That sounds easy. Why haven’t we built one of those?

Students: … (pause) … (discussions) … But it is not easy. The spinning space station would need to be so big, and so massive, that it would take more money than anyone has.

Teacher: Yes, it always boils down to money. So, the real problem is how to build the device to perform the Fractional Gravity Experiment so you don’t go broke.

I had been thinking about this problem for years before this conversation. I had some ideas — but I want,ed my students to own the problem and a possible solution. They never solved the problem — hey if it were easy NASA would have already done it long ago.

Tune in next week for Part 3 — the finale of the Big Idea: The Fractional Gravity Experiment.

• Robert E. Strong received a bachelor of arts degree in physics with minors in mathematics and philosophy and has a master’s degree in space studies. Robert taught secondary school math and science in Benin, West Africa, (Peace Corps volunteer) and in American Samoa. He worked as a physicist in a research laboratory. Robert is president of the Near Earth Object Foundation dedicated to educating the general public about Near Earth Objects and providing public StarWatches. Robert and his wife Libby started the SMART-Center in 1994, a hub for science- and math-related activities for area schools, educators and the community. They also operate the SMART Centre Market — an interactive hands-on science store in Wheeling, featuring Orion telescopes, science toys and Kirke’s ice cream.