It is an annual effort that teaches the student body at Central Catholic High School about serving their community while providing food for the less fortunate in the Wheeling area.

Each December before the high school’s exam week and Christmas break, the pupils scour the city to collect grocery bags filled with canned good and non-perishable items donated by residents of several neighborhoods in the Friendly City. Last Saturday every Central student participated in the distribution of 6,000 paper grocery bags donated by Riesbeck’s Food Markets, and tomorrow volunteers and parents will join alumni and faculty and staff members with the collection of the items.

“We used three different buses to get all of the students and the grocery bags to areas like Woodsdale, Dimmeydale, the Washington Avenue area, Forest Hills. Elm Grove, and Bethlehem,” explained Becky Sancomb, principal at Central Catholic. “And we will begin the pick-up process at 10 a.m. tomorrow, and we will have specific areas in each neighborhood where the students can sort what we collect so it’s ready to deliver to Catholic Charities’ 18th Street Neighborhood Center. 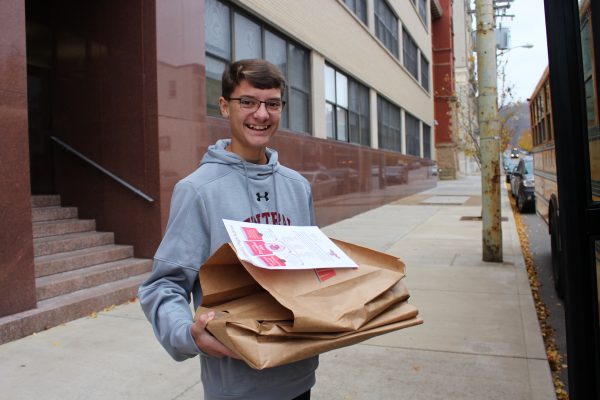 Student Thomas Minor was all smiles last Saturday as he assisted with the distribution of 6,000 grocery bags donated by Riesbeck’s Food Markets.

“We were very successful last year thanks to the generosity of the people in the Wheeling area. The students collected over 17,000 items for the center,” she said. “I’m sure not everyone who received one of the grocery bags was able to participate, but I’m willing to bet that the vast majority of them did because of the great level of participation that we realized.”

Sancomb said the most popular items donated the last few years have included canned soups, chili, vegetables, and fruits, as well as boxes of macaroni and cheese, rice, pasta, and instant mashed potatoes. On occasion during past collections the students have been forced to toss away donations that had passed their expiration dates, and the high school principal wished to remind those planning to offer the non-perishable foods to check those dates.

“I know I go through the pantry at our house from time to time because that happens to all of us,” Sancomb said. “But if we find items that are expired, we really have no choice but to throw them in the trash because we do not wish for anyone having a meal at the Neighborhood Center to be negatively affected by our efforts. 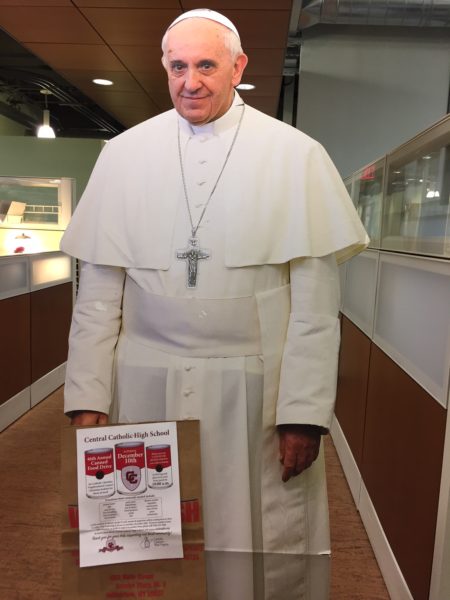 This life-sized cut-out of Pope Francis has helped remind the student body of the importance of the annual food drive.

“We also have had some local folks who have contributed steaks and pork chops in the past, and those are examples of items that we cannot use because they are perishable foods,” the administrator explained. “Those times have been very rare since I have been involved, but it never hurts to remind the very generous people in our community of what we can and cannot collect responsibly.”

The staff and faculty at Central Catholic focus on service to the community several different times during each school year, and a part of that involves inviting guest speakers to the high school to speak with the student body. Last week Wheeling Council member Wendy Scatterday discussed volunteerism with the pupils, retired English teacher Lou Volpe addressed the important of service in the Catholic faith, and a pair of students from Wheeling Jesuit University offered examples of how they and many others at the college have participated in local projects in the past year.

“Service is a big part of what we teach here at Central because it gives our students the opportunity to get outside of themselves so they can concentrate on their Catholic faith,” Sancomb said. “Once they take that focus away from themselves, they have the chance to learn a lot of their community and about themselves, too. 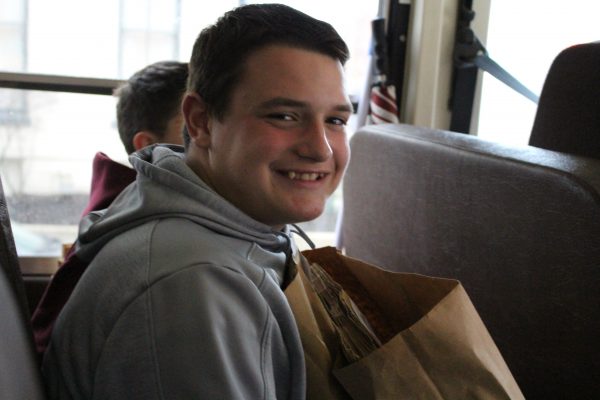 Three buses transported every member of the student body from Central Catholic High School to several neighborhoods in the city of Wheeling.

“I know they learn during this process that serving others is serving God, and we hope that they retain that calling for the rest of their lives,” she added. “This food drive really allows them to learn that with their actions they can have a very positive impact on others, and by the time the members of our senior class reach this point during their final year with us, it means a lot to them because they have made that difference in their community before.”