The answer to, “What’s Next?” may soon come into focus for downtown Wheeling, but what maybe-could-might happen within the vacant lots along Main Street remains a literal mystery.

The Health Plan headquarters in the 1100 block of downtown Wheeling has opened with approximately 400 employees reporting to work Monday through Friday. Adding to that critical mass are the residents of 70-plus apartments in the Boury Lofts at 16th and Main streets and the hundreds of employees for Williams Lea Tag, and Orrick. That is why many now wonder what could stand in the future on land that once featured Imperial Display, Reichart’s Furniture Store, Peking Garden, and the Diamond Bar.

Each of the mentioned properties is privately owned, while several others within the downtown are held and maintained by the City of Wheeling. City Manager Bob Herron reported that there are not current conversations taking place pertaining to those properties, but he explained that the new storm sewer project nearing its end on Main Street will be capable of handling any new development along the roadway.

“Right now, there is nothing imminent in respect to the lots that are privately owned in downtown Wheeling,” Herron reported. “But the current storm sewer project that continues along Main Street was sized to be able to handle any new development projects along that street.” 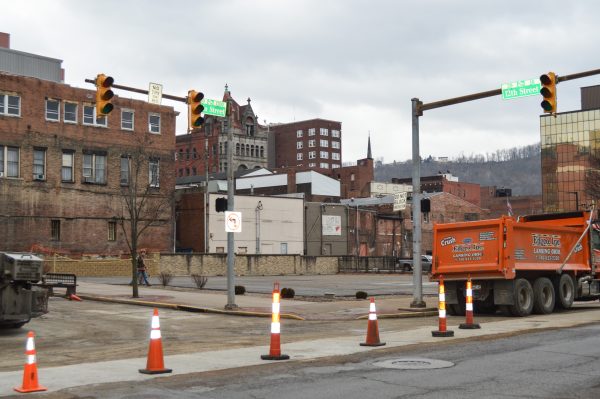 Peking Garden Restaurant was once located here but the structure was razed in 2016 after the eatery had been closed for more than 20 years.

If downtown property owners aspire to develop their land with new construction, they must approach the city’s Planning Commission with the proposal. If such a project does not include constructing a building at least three stories in height, a variance must be granted by the Zoning Board of Appeals before such a development can move forward, according to the city manager.

The three-story ordinance was approved by a 5-2 City Council vote in June 2017.

“The zoning ordinance does now require that if you build in the downtown district, that you are required, under the ordinance, to construct a three-story building,” Herron confirmed. “Now, under the ordinance, there is an appeal process, and that appeal process goes to the Zoning Board of Appeals. The property owner would have to make their case as to why they should be granted a variance to that requirement. There would have to be very, very good reasons for that in order to consider such a variance.”

But the city manager, who has served in the position since 2001, explained a potential renovation plan for the downtown’s largest building might just be the next major development project for the municipality’s business district.

“This is a conversation that we do expect will move forward,” Herron said. “The owner of the property has retained Coon Reconstruction Co., a very reputable restoration firm that was the company that restored the front façade of the Capitol Theatre.

“The mayor has toured several of the company’s projects that used federal and state tax credits in Ohio, and they have completed 40 to 50 of those kinds of projects,” he continued. “Mr. Coon and the owner, who is a doctor in the Columbus area, have come to an agreement to restore and renovate the property into market-rate apartments, assuming that they do qualify and receive the same tax credits in West Virginia.” 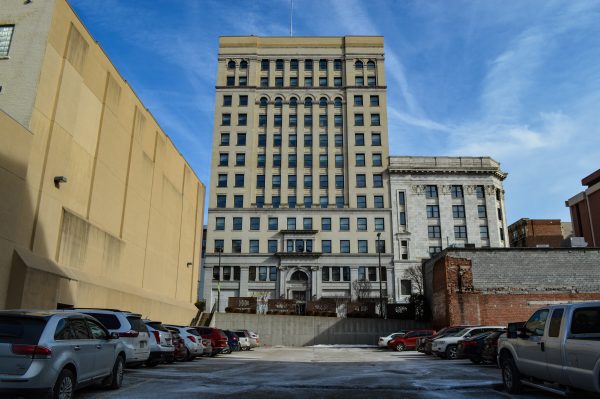 The redevelopment of the Schmulbach Building, the tallest in the downtown district with 12 floors, may be the next significant residential project to take place, according to Wheeling City Manager Bob Herron.

The initiative involves a re-purposing partnership with Access Infrastructure LLC and Coon Construction Co. in order to transform the 12 floors of the Schmulbach Building into 100 market-rate apartments. The structure opened in 1907 and has been the home of a variety of different businesses, including Wheeling-Pittsburgh Steel, a company that once employed as many as 30,000 employees in six facilities along the Ohio River.

The 144,000 square-foot building, though, has sat empty since early 2013 after RG Steel filed for federal bankruptcy protection. Steve Coon, owner of Coon Construction, appeared in Wheeling in early 2017, and told city officials that if the state Legislature were to increase West Virginia’s historical tax credit from 10 percent to 25 percent, he would be interested in renovating the historical property. The increase was granted in late 2017.

Herron reported that the partnership has applied for the tax credits and is now awaiting to hear if the project is approved.

“We are very optimistic that the tax credits will be approved, and if that is the case we will have a major renovation project taking place in the largest building in downtown Wheeling,” he explained. “It’s a monstrous building, and certainly this is an opportunity to put that property back in to use.

“I know that they have one of the main elevators working in it now, and the work to clear it out has already started. When the last company in the building closed, it appears the employees just got up and left and took nothing with them,” Herron said. “And, right now, they are evaluating the materials that were used and what materials they will use for the project. It’s an important part of the cost assessment, and it involves a lot of planning.” 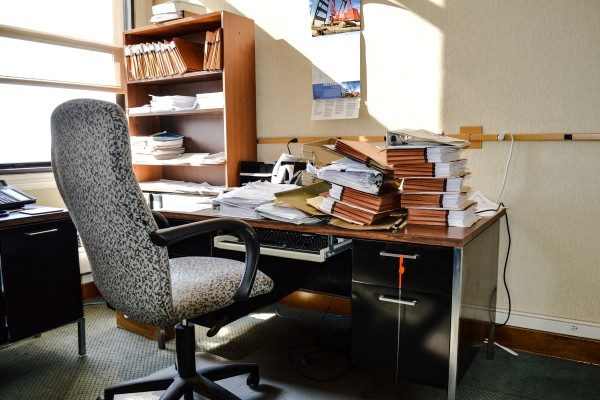 The Schmulbach Building is now being cleared of everything left behind by RG Steel officials once the steelmaker ceased operation in late 2012.

The state tax credits, however, represent only the beginning for the proposed transformation. The city manager explained a new parking garage would need to be built in close proximity and conversations between city officials and the owners of a parking lot directly across Market Street continued last week.

The lot between UniGlobe Travel and the Robinson Professional Building once was the location of L.S. Good Co., and now all of the 140 spaces on both the north and south ends are leased.

“There would have to be parking constructed because in order to lease an apartment, you would have to have convenient parking,” Herron said. “In this case, they would be across Market Street, and there have been discussions with the two current property owners of this parking lot. They have been very cooperative and are very interested in working with the city to developing a project.

“We would want to include some retail development in that project, as well,” he continued. “We have met with our financing team to start talking about how we could construct a financial model for a parking structure with retail space at the location.”

The size of the proposed parking garage, Herron said, has yet to be finalized, and that means the unknowns include the projected price tag and how the construction costs would be covered. 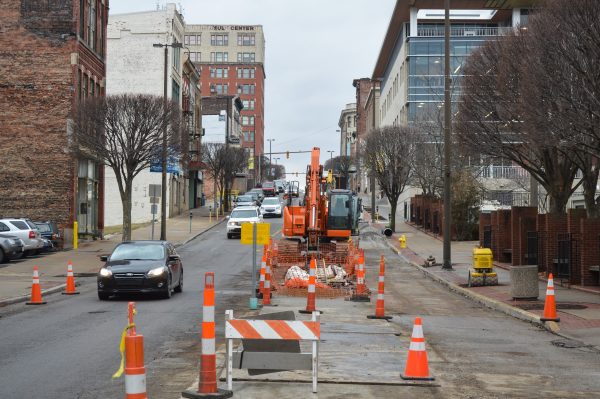 The storm sewer project along Main Street is large enough to handle additional development near The Health Plan.

“We do not know how the finances would work at this time, but I expect there to be a series of funding sources,” Herron said. “But what those sources are has yet to be determined. It’s going to be a complicated issue, and it’s all still subject to change, but the property owners are very interested in making this work.

“Another aspect of this project is what size it would need to be,” he continued. “The number of spaces has yet to be determined, but we do know that such a structure would need to serve more than the tenants of the market-rate apartments. At this time, I can say that the number of parking spaces would be between 300-500 if an agreement can be reached with the property owners in the future.”

While elected lawmakers and residents of Belmont County have been waiting more than three years for PTT Global America to decide whether or not the company will build a $6 billion petrochemical plant, Wheeling officials expect to learn in March if the West Virginia State Historic Preservation Office approves tax credits for the Schmulbach Building.

“Hopefully, that’s what is next for downtown Wheeling,” Herron said. “It’s a huge project, and we will have a very good idea if that proposal will move forward pretty soon. That’s when the developer and the property owner will know about the historic tax credits, but right now we are very optimistic the building will be redeveloped.”