Charlie crawled through the frigid rain, one step at a time. His bones ached; his backside throbbed. He hadn’t eaten in days, and he could barely make it up the porch stairs. The world around him felt enormous and cruel. He didn’t know where he was, but as he huddled in a frozen, muddy ball, his strength left him. The kitten had never known a kind word or a loving touch, and now he prepared to die.

Charlie isn’t the first cat to face death scared and alone. It’s estimated that roughly 70 million homeless and feral cats live in the United States. You can find them in every neighborhood. Under porches, behind restaurants, among apartment complexes. Most are intact males and females with no access to medical care, and so the population continues to expand.

Ashley Vicker Blinco founded Back Street Cat Rescue for this very reason, and thanks to her, Charlie, the long-haired, black-and-white tabby, didn’t die. I met her at Pet Supplies Plus on a Saturday.

“Charlie’s bottom had been torn to shreds,” she said. “He was two days away from death’s doorstep. He was so infected, he was lethargic, he was malnourished. He only weighed 3 pounds, 6 ounces.”

The kitten almost died that day in the rain, but someone found him, and now he’s on the mend. He came with Ashley and the Back Street volunteers to Pet Supplies Plus in St. Clairsville, along with half a dozen other cats, for their weekly adoption event. When a volunteer opened his cage door, Charlie hopped to the edge to greet me. His eyes were bright, and his fur was silky.

“He’s going to be one that everybody wants,” Ashley said. “He was outside waiting to die, and now he’s going to be somebody’s beloved pet.” Indeed, he received a fair amount of attention with his unusual markings and curious face. 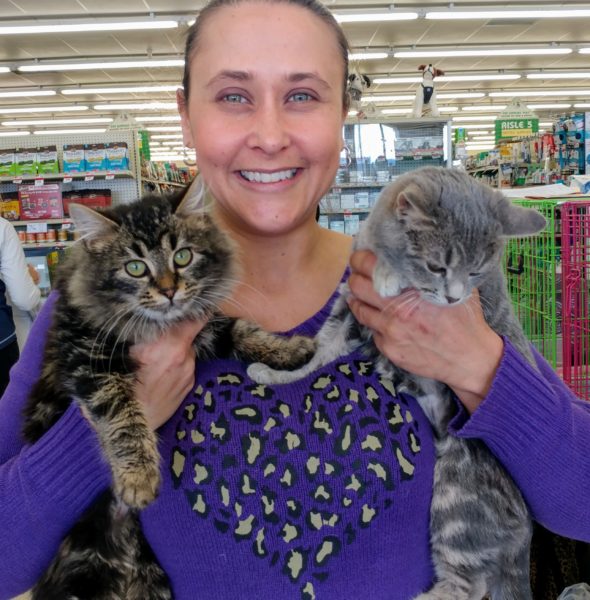 Ashley Vicker Blinko with two of her feline friends.

Ashley began fostering cats through another rescue organization. When she realized the need was great, she decided to start Back Street Cat Rescue.

“It’s a big need in this area,” she said. “We are a heavily populated cat area. My one little rescue, we do about 500 cats a year. We are no-kill, so it’s giving some of those cats a chance. It’s not the shelters’ fault — there’s only so much room. We have the ability to say ‘No, we can’t take any more, there’s no more room.’ The shelters don’t have space sometimes.”

Ashley, who has a family and works full-time as a nurse, says there are many sick and injured cats out there.

Back Street Cat Rescue, a 501(c)(3) organization, is foster-based. There’s no physical headquarters, and the work is done in foster homes. Foster charges live with their temporary families 24/7, just like any other family pet. Ashley says this helps the cats adjust well when it’s time to move to a permanent home. While shelter cats spend all day in a cage with little chance to interact with humans, Back Street’s rescues make an impression on their foster-families.

“We know all of their personalities,” Ashley said. “All their good habits, all their bad habits. We try to match people up so we don’t have many returned for behavioral issues.” She wants adoptees to live indoors where they’ll be safe from the conditions that endangered them in the first place. Back Street spends an average of $160 per cat for spaying and neutering. This doesn’t include medications or other treatments for cats with special needs.

Charlie had special needs. But after his first week in foster care, he’d gained almost 4 pounds.

If you’d like to help Back Street Cat Rescue, now would be a good time. Spring is kitten season, and Ashley gets at least five calls a day. She can’t take them all, so there’s a waiting list. Right now, moms and kittens have the greatest need; they go straight to the top of the list along with emergent situations like Charlie’s. The organization is still working its way through January’s waiting list. They need help fostering. Foster families supply love and attention only; the rescue supplies litter, food and medical care.

Ashley said she and her volunteers are usually too busy caring for the cats to organize regular fundraisers, so they try to do only two or three big ones per year. This Saturday, Back Street Cat Rescue will host its fifth annual Spring Fling Dinner Dance at Generations Restaurant and Pub in Wheeling. They hope the money they raise will get them through kitten season. 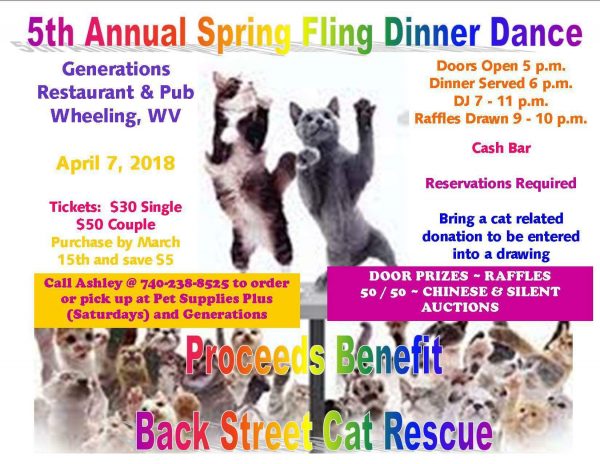 Sometimes the fundraising doesn’t quite meet the cats’ needs. Last year, Ashley spent $4,000 of her own money to cover the gap between donations and costs. But she hopes the upcoming fundraiser will fill the kittens’ coffers. One big difference between Back Street Cat Rescue and organizations like the SPCA, Ashley says, is where your donations go.

“One-hundred percent goes to the cats. None of us are paid. I don’t get paid, I don’t pay for my gas. Not one penny goes to anybody but the cats. It’s a fun night out for the kitties.”

There will be a cash bar, door prizes, raffles, Chinese and silent auctions. You can get tickets at Generations and Pet Supplies Plus. $30 for a single or $50 per couple.

If you can’t make it to Generations, there are other ways to help cats like Charlie. They need more foster families. Yet Ashley knows that many people hesitate for emotional reasons.

“People are afraid to foster because they say, ‘Oh, I’ll get attached.’ It’s hard the first few times, but you realize once you start fostering that there’s another one that needs you, and the best thing you can do for that one is to find a loving home for them.” All foster families are volunteers. She’s got eight at this time and could use more.

If you don’t have the room to foster, donations can be dropped off at Pet Supplies Plus. The rescue always needs litter, dry and canned food. They use Purina Cat and Kitten Chows and request that particular brand because switching can upset the animals’ digestion. Back Street has an Amazon wishlist where you can send supplies with one click, and they’re also set up to receive Kroger Community Rewards. You can easily go online or to the store and chose them for donations. It doesn’t cost you anything, and it doesn’t affect your fuel points. Roughly 70 people are currently supporting the rescue in this manner, and Back Street receives $1,000 per quarter from the program. It’s perhaps the easiest way to give.

Another way to help is to “like” the Back Street Cat Rescue Facebook page. By sharing photos of adoptable cats, you’re increasing their chances of success and helping Ashley open up space for more cats like Charlie. Indeed, it’s tireless work.

“I’d like a vacation sometimes,” Ashley said. “It’s like the mafia: you can get in, but you can’t get out.”

Nevertheless, her commitment to the cats is unwavering. Volunteers bring the cats to Pet Supplies Plus every Saturday afternoon from noon-4 p.m. And while the need is great and the resources few, they continue to work miracles for kittens like Charlie, who would otherwise live and die without ever knowing love. In the cage next to him played two kittens who were dropped off at a cow farm. When they arrived at their foster home, they stole food off the table and from human hands because they were so used to surviving on scraps. Now, they’re friendly and gentle. Howie, a big white cat, purred and strutted; people crowded around the cages to see the adoptees.

Ashley looked grateful. So did a mama cat and her two orange kittens. Ashley smiled.

“You can tell they’re thankful to have a kind hand,” she said.

Back Street Cat Rescue will host its fifth annual Spring Fling Dinner Dance on Saturday, April 7, at Generations Restaurant and Pub in Wheeling. Tickets are $30 for single, $50 per couple. Doors open at 5 p.m. Call Ashley at 740-238-8525 to order, or pick up at Pet Supplies Plus (Saturdays) and Generations. 100 percent of donations will go to the cats.