Today is a time when young adults are graduating from high school and traveling away from home to attend college or find work because they don’t believe there are any job or career opportunities where they live. While this may not be true for all areas, the Ohio Valley seems to be facing this reality. Young adults are packing up their belongings and moving elsewhere to find work because “there is nothing here” in the Ohio Valley, and as a result, businesses are starting to fall apart.

As a young adult two years ago, I was one of those students who had decided that moving away was best for me if I ever wanted to become successful with my future career goals. I am a Valley native, from the Saint Clairsville/Maynard area, who went away for a year but then came back because of an inner calling. I was attending my dream school at Capital University but never really developed that ‘at home’ feeling, and so I decided to come back and continue my education at Ohio University Eastern. During this transition, a lot of things had changed in my mind about the way I viewed the Valley. I was hired in OUE’s student services department as a front desk operator. It was then that my perspective about how “bad” the Valley is started to shift. I learned that there are so many opportunities to become successful here if one works hard enough and doesn’t give up on their goals.

I began to pursue my goals even before the transition to a new school was completed. I had started my own women’s fitness group and had applied to my first internship with the Community Foundation for the Upper Ohio Valley (CFOV). I did not get accepted the first time applying and was devastated. However, with the encouragement from my friends and family, I decided that I would apply again the next year. That decision would be the one that completely changed my life and opened up many doors of opportunity. After I learned of my acceptance, it wasn’t long before I completed that first interview with Mrs. Debbie Bloomfield and Miss Joelle Connors, and was on my way to become a marketing intern for the City of Martins Ferry. What I am about to share next is my story of this life-changing experience.

The CFOV offers a Civic Leaders Fellowship program which “provides summer employment opportunities and a program of civic leadership development for college students who reside in the area.” It was through this program that I had become an intern, which is funded primarily by the Claude Worthington Benedum Foundation, among others. This program has been around for five years now and will hopefully be around next year, as the main donor, Benedum, is dropping off. Students have the opportunity to complete this program as a first, second, or third year participant. The main goal of this program is to enhance professional soft skills and provide networking for students to find employment in the Ohio Valley after graduation. After completing this program, I can truly say that for me, the program has accomplished its goal.

Throughout my seven weeks in this program, I was able to discover much about this Valley that I did not realize was here before. We interns were placed at our host sites, Monday through Thursday, based on our major or degree. Then, each Friday, participants reported to the CFOV office in Wheeling and received professional development programs, team building activities, and tours of local businesses or speakers from the area. For example, we toured Zigenfelder’s, Centre Market, Touchstone Research Laboratory, and the United States Federal Courthouse, to name a few. In addition to networking, the speakers or business owners would give their personal contact information so that participants may call upon them for future reference. On some Fridays, we were able to get outdoors and do things such as Zip lining at Grand Vue Park, or touring the historical East Wheeling area. Overall, these experiences aimed to demonstrate how much opportunity and involvement the Ohio Valley offers. 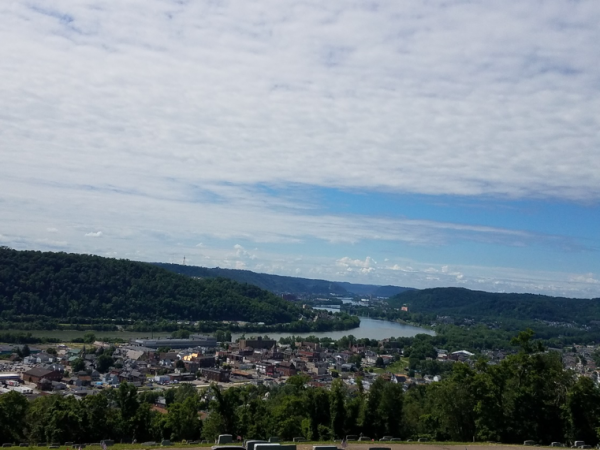 View of the Ohio Valley from the top of Riverview Cemetery in Martins Ferry Ohio.

I was placed with the City of Martins Ferry. On my drive to the City building, my mind couldn’t help but think that this program was going to be a total bust. I mean, what exactly is there to do in this Valley that I haven’t done already? The answer is: a lot. As I walked in, I was greeted with smiles all around (which was shocking to me, since I am from their rival City). From that day forth, I was treated as one of their own. I was able to meet nearly everyone in the City as I drove around with the Mayor and Service Director on a daily basis for about two weeks. I ventured to what seemed to be the highest point in the Valley, to the top of Riverview Cemetery, where the view was unbelievable. If it wasn’t for this program, I doubt I would have ever known such a place existed.

I would go through the next couple of weeks designing and updating the City’s website, posting on social media, creating surveys, and meeting someone new each day. Then, the day came for the meeting of Martins Ferry’s revitalization group called Project Forward. I had never attended a business meeting before and I did not know what to expect, but, sure enough, I had discovered yet another valuable treasure worth taking note of. This committee was full of nothing but positive energy and excitement for planning its first event, designed to bring more people into the downtown area. Committee member, Mr. Bill Webster, stated, “Anyone can join Project Forward. There is no membership requirement, except to come to a meeting with a positive, optimistic outlook and to be ready to serve in our events.” I was fortunate enough to not only witness this take place, but to be adopted into the committee as well. 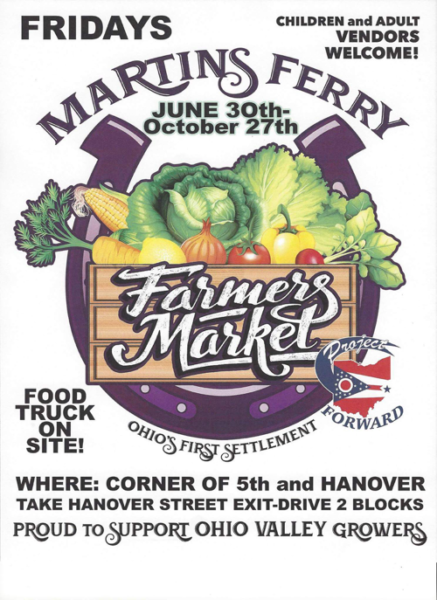 Flyer for the Martins Ferry Farmer’s Market. Every Friday from 10-2pm.

I made connections with the local business owners and began to help them advertise the upcoming Farmer’s Market, which eventually led to me getting involved with recruiting vendors and helping committee member, Ms. Melissa Yeso, prepare for the market each week. My job was to advertise and reach out to people in whatever ways possible in order to communicate about the opening of our Farmer’s Market. 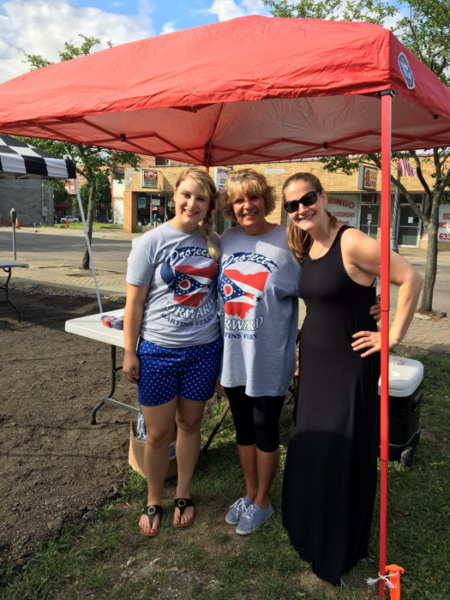 At some point, I came up with an idea to jump on this year’s summer trend: painting rocks and hiding them for others to find. Instead of just doing those two things, painting and hiding, I designed the rocks so that they would help our community. On the front is the Project Forward logo, followed by special directions on the back which say something along the lines of, “You found me! Now, complete a community service project such as cutting grass, pulling weeds, etc. and post a picture of your work on our Facebook page to be featured.” After the first couple days of handing them out to residents in the City, I was starting to believe that this was a failed effort. Then, on week five of my internship, people started posting pictures of rocks they found, along with evidence of the volunteer work they had completed. I could not believe that this had worked. I was even more shocked to see that one of my rocks had made it all the way to Ocean City, where a business woman had found one alongside the bay and wrote to us her inspirational story of how she helps clean the earth every day. 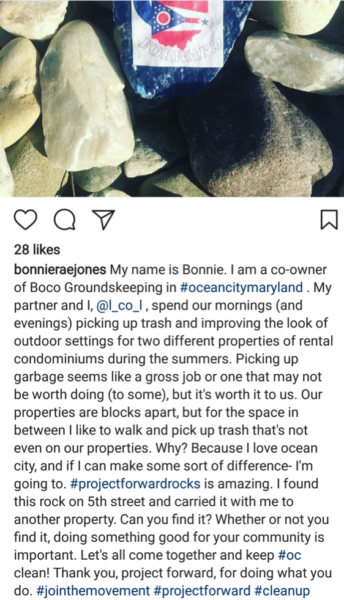 After hearing this exciting news, it wasn’t long before the news and radio stations started arriving at our Farmer’s Market. As of today, we have twelve committed vendors (and growing) who will attend our market for the remainder of the year. The Martins Ferry Service Director, Mr. Chris Cleary, states, “Martins Ferry is a friendly community with historic roots dating back to before Ohio was a state. Citizens are extremely loyal to the city and the businesses that are located here. There is a tremendous amount of pride and now that pride is being put to action, which is creating a stronger community.” The Farmer’s Market is held each Friday from 10-2 pm at the corner of 5th and Hanover Streets in Martins Ferry. It is located in the central area of the City and anyone is welcome to attend for great food, products, and entertainment. There will be more upcoming seasonal events to follow, starting in the fall. Meetings are held on the third Thursday of every month, if anyone would like to come and discuss their ideas.

As my time in this internship came to a close, I was presented with even greater opportunities. The City of St.Clairsville got word of the work I had done with the website design for Martins Ferry and have asked me to completely remodel their website as well. In addition, Mr. Chuck Schorr, owner of Hot Rod Tattooing, has asked me to stay up to date with my marketing efforts for Project Forward, at his expense. I am beyond grateful to have received such honor and trust among this kind and welcoming community, and I am especially thankful to have been selected to be a part of this Fellowship Program with the CFOV. If I had one piece of advice to give that I have taken away from this process, it would be this: Anyone can leave the Valley and become successful, but everyone can stay in the Valley, become successful, and actually do something meaningful if they believe it.