It’s showtime. Music blares over the speakers, lights dance off the billowing fog, audience members rise to their feet and cheer as their heroes make their way to the ring. The champion holds his golden title belt high as his challenger awaits his opportunity to take it. The bell rings, and the match begins.

But this is no multi-million-dollar show put on by a global wrestling conglomerate. The men in the ring are not nationally known superstars with movie deals and mansions. They do not fight for money or fame. In fact, most of the money raised by ticket sales goes to certain charitable organizations around the Ohio Valley. 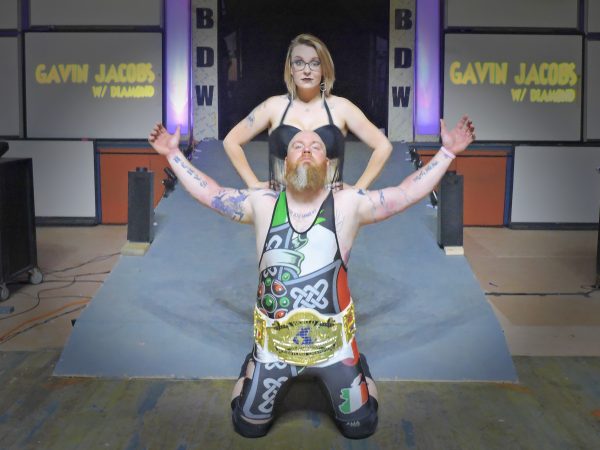 This is Black Diamond Wrestling, the Ohio Valley’s own independent wrestling company, an unexpected treasure for fans of the sport and spectacle of professional wrestling. After 15 years of putting on shows at venues from Newell to Sistersville, BDW will host a special anniversary extravaganza on Sunday, June 3, at its recently opened home, the Diamondplex, at 1695 Marshall St., Benwood.

Special guest wrestlers for the evening include former Extreme Championship Wrestling star Shane Douglas, Total Nonstop Action veteran DJ Z, and Ring of Honor veterans Colin Delaney and Chris LeRusso. They will be joined by a roster of local talents for a full evening of matches and entertainment. Doors open at 4 p.m. for a meet and greet, with a 5:30 p.m. bell time. Tickets are $15 for ringside and $12 for bleacher seating. 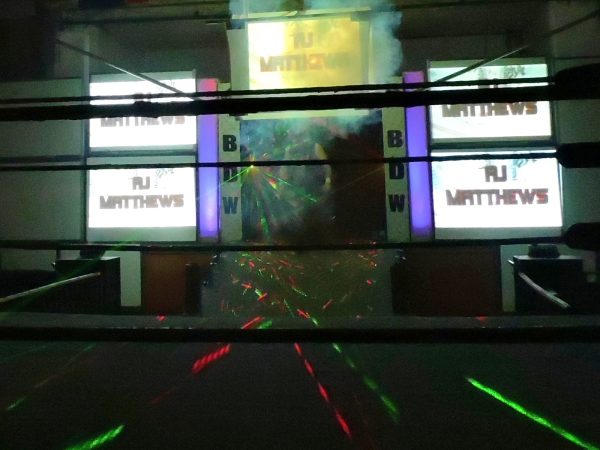 A spectacular entrance ramp builds excitement for Black Diamond Wrestling matches thanks to the impressive effects spearheaded by founder and promoter Rikk Diamond.

A life of wrestling

“I’ve been a wrestling fan all my life,” BDW founder Rikk Diamond said as he watched two of his performers grapple in the ring during a special private event in May. “I was a wrestler before I was a promoter. I wrestled for a few different organizations. I also went and helped set up a few rings.”

Rikk was inspired to launch BDW because he wanted to give local performers an opportunity to share their passion with their local community.

“These guys just want to enjoy themselves and give the fans a good match,” Rikk said. “We feature a lot of unsigned independent talent. Our first show was on June 3, 2003, at the Holiday Inn in Dallas Pike. From there, we’ve gone to every corner of the Ohio Valley and beyond, going as far as Morristown, Ohio, and McKeesport, Pa.”

These performances often benefit local causes, uniting wrestling showmanship with community interest. The first event at the Diamondplex raised funds for flooding relief in McMechen. BDW also has raised funds for Drug Abuse Resistance Education and has pledged to raise funds for the American Heart Association during the 15th anniversary show. These funds often come from ticket sales, 50/50 drawings and raffles.

“This is also a much more family-friendly show,” said “Diamond,” Jacobs’ on-stage manager and off-stage wife. She took the stage name “Diamond” to honor Rikk, who also happens to be her father.

“I grew up watching my dad wrestle,” “Diamond” said. “We have fans from infants to grandparents. They are like family to us. Wherever we go, they go. That’s the local aspect of our wrestlers — you could see them the next time you’re at the grocery store.”

To further give back to the fans and the community, “Diamond” said that the promotion often hands out free tickets to students, high school wrestling teams, first responders, police and firefighters. The audience size for each show usually averages about 100-150 fans, with the farthest bleacher seat less than 50 feet from the middle of the ring. During intermission, athletes also come out to talk with fans and sign autographs.

“It gives us a chance to get up close and personal with fans,” Jacobs said. “At the same time, our special effects give this place a very professional arena vibe.” 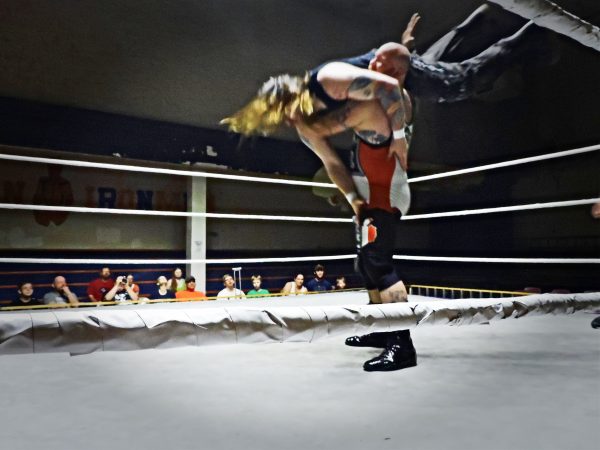 The art of body-slamming showmanship

Indeed, Rikk Diamond said he delights in the showmanship of wrestling, from a panorama of screens by the entrance ramp to actual pyrotechnics and lasers and an impressive audio system. A veteran of such productions as national wrestling promotion Ring of Honor, Rikk has devoted an enormous amount of time and resources in building an immersive experience.

“If Rikk gets an idea, it’s going to happen,” Jacobs said. “We build it all ourselves. We buy the materials, and we put it all together.”

And Rikk’s ideas are not the only ones that get picked up. A few days after each show, the company issues a call to arms where talents and promoters alike are invited to start planning the next event. Usually, Jacobs said, they try to plan storylines about three months in advance. During these planning meetings, everybody is welcome to brainstorm and to contribute their ideas. This creates an organic show that is always growing and evolving.

As might be expected, this results in some creative gimmick matches. Buried alive matches, casket matches, tower and scaffold matches, tables, ladders and chairs, and cage matches have been incorporated into various events. 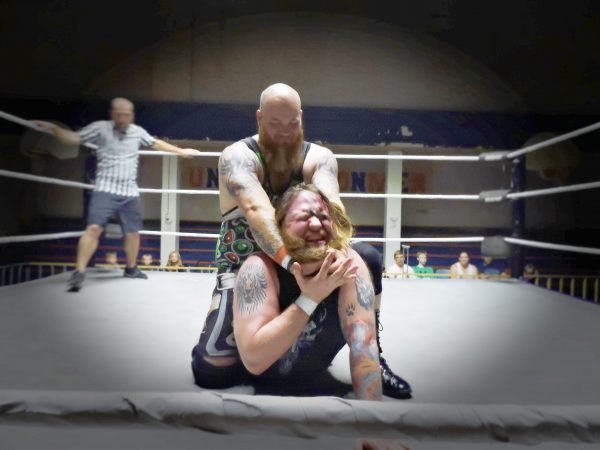 As “Diamond” and Jacobs said, the BDW fan base is fiercely loyal and dedicated. Their enthusiasm for their hometown promotion is as impressive as the spectacle they come to see.

“It’s action, and it benefits the community,” Don McKenzie of Wheeling said. He attended his first show in 2008 and still comes to shows regularly.

Jackye Nice and her family, meanwhile, have made BDW events into a major staple of their family lifestyle since being convinced by Rikk to try it out in 2013.

“We came and thought, ‘What in the world is this?’ our first time,” Nice said. She recalled an incredible event so intense that the wrestling ring itself broke.

The Nice family has become part of the spectacle themselves, with reserved ringside seats they keep filled with at least three generations of fans. They make signs to support their favorite wrestlers, wear group shirts and dress as their favorite wrestlers sometimes. During special occasions like a major title win, they have even been known to bake a cake for the new champion to celebrate the victory.

“It’s always nice when the wrestlers come out and see us,” Nice said. “They really show their appreciation for our support.”

Tiffany Killeen of Wheeling praised the promotion’s commitment to providing a welcoming atmosphere to families.

Both Nice and Killeen said they are excited to celebrate 15 years of Black Diamond Wrestling in the Ohio Valley, and they hope to be there to celebrate the next 15. 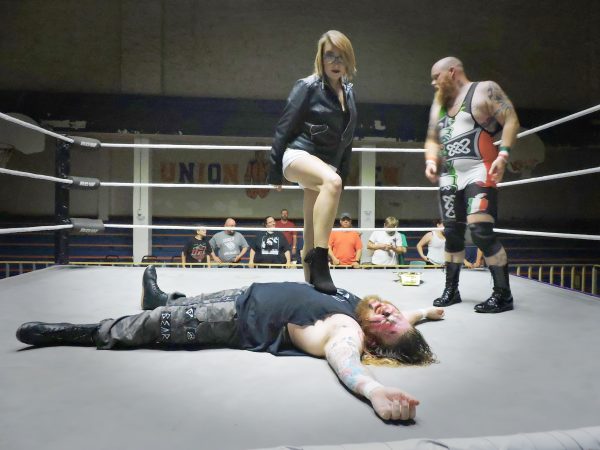 As for the BDW wrestlers, some of whom drive hours to perform, the opportunity to do what they love is a dream realized. Despite the fact he lost to Jacobs in the evening’s special match, talent A.J. Matthews would not miss it for the world.

“This is something I’ve wanted to do my entire life,” Matthews said. As he and Jacobs shook hands after the match, the pair’s respect for the sport and for each other was clear. 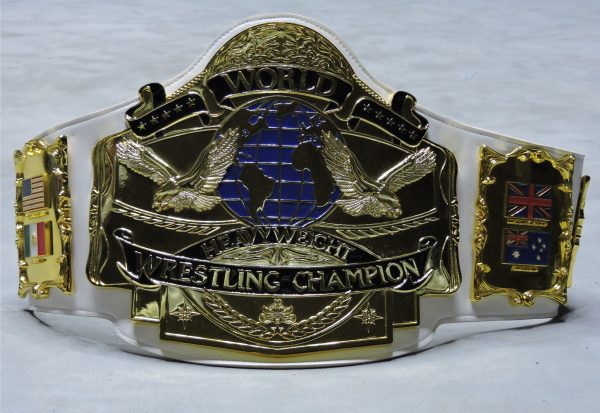 The Black Diamond Wrestling World Heavyweight Championship belt glistens in the light of the Diamondplex in Benwood.