The Highlands. Elm Grove. Mount de Chantal Road – all are business and retail areas in or near Wheeling that benefit from the opportunity of having an “Attraction Sign” along Interstate 70.

However, such a display is not in place for the downtown Wheeling district despite the fact that several business owners would be willing to participate in the state project.

“I can tell you that we have talked with everyone who has been in charge of District 6 for the past 10 years,” explained Jason Miller, co-owner of River City Restaurant and Conference Center on the corner of 14th and Main streets. “It’s just never made sense to us why we cannot have the same sign that every other exit has in this area.

“We know it costs money and that it’s not free, and we’re fine with that,” he said. “And we have spoken with some other business owners who say they would be interested, too, if given that opportunity.”

According to Carrie Bly, spokeswoman for the state Department of Transportation, the Attraction Sign program involves an annual fee of $600 per business plus a one-time installation fee of $200.

“We pay a lot more for the billboards that we have along Interstate 70 between here in and Washington, Pa., “ Miller said. “All I know is when I am traveling, I pay attention to those signs, and I think the businesses in downtown Wheeling should have the same opportunity as all the other businesses do.”

Interstate 70 is reduced to one lane in both directions in the area of Wheeling Tunnel, leading officials of the state Division of Highways to designate the roadways as too dangerous to erect an “Attraction Sign” featuring advertisements for downtown businesses.

Miller said one reason he remains frustrated with the DOH is that he has heard several different reasons from DOH officials.

“It’s just frustrating,” Miller added. “If it’s ever possible, we would like to participate, and I know others would, too.”

Cindy Johnson, the general manager of the McLure Hotel in downtown Wheeling for 19 years before her retirement earlier this month, said the lodge’s owners have been interested in the program since it began in the late 1990s.

“I think it’s a great program the state has for businesses that are located near the interstate, but it was something we could never make work for the hotel,” she said. “It’s frustrating because downtown Wheeling is in the middle of The Highlands and the Ohio Valley Mall, and there are thousands of travelers who pass right through downtown Wheeling every single day.”

Bly cited the Logo-Signing Manual, which was revised in 2005.

“Any time an area is being looked at for this program, an engineering evaluation takes place, and that’s how the decision is made,” she said. “Here in Charleston, for example, there are not Attraction Signs because of the amount of interchanges and bridge systems involved.

“The same is true as Interstate 70 approaches Wheeling Tunnel,” Bly continued. “Not only is that an area where Interstate 70 is reduced down to one lane, but there also are several exits in the area, and there are three bridge systems leading into the tunnel. Why that has not been explained to the business owners asking the question I do not know, but it sounds to me as if they have yet to reach the right person, and they have not reviewed the manual that is available online.”

The manual states that such an evaluation would take into consideration but not be limited to the following:

“In that area it was determined that it would be better to concentrate on traffic patterns and not where to eat,” Bly said. “And those decisions have to be made to ensure the safety of the motorists traveling on all the interstates in the state of West Virginia.” 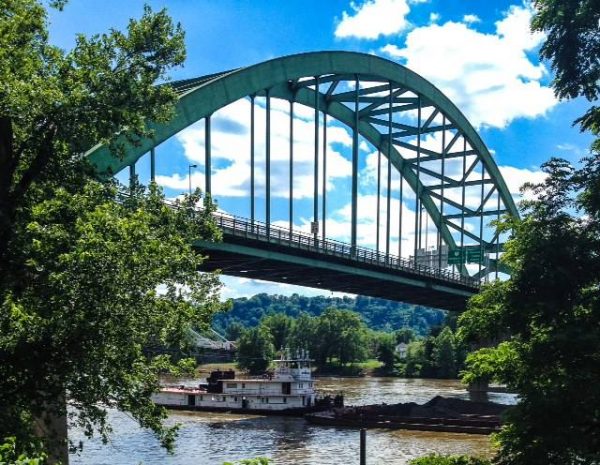 Downtown Wheeling is bordered by bridges along Interstate 70, including the Fort Henry Bridge and three separate overpass systems east of Wheeling Tunnel.

Frank O’Brien, executive director of the Wheeling Convention and Visitors Bureau, is tasked with increasing the amount of tourism visiting the Wheeling area. While he agrees that gaining an Attraction Sign for the downtown district would benefit the many businesses, he understands why DOH officials have made the decision to focus on safety.

“Would having a sign be a good thing? I believe so, but maybe not for the people who are trying to make sense of the traffic patterns,” he said. “There are many accidents in that area, and that’s because of how it was all designed a long time ago.

“But we are working hard to increase the visibility of downtown Wheeling in many other ways through our marketing for the Capitol Theatre and the area in general, and with organizations like ReInvent Wheeling,” O’Brien said. “And several of our downtown businesses do purchase billboards that can be seen as motorists are heading into Wheeling, so those owners are doing their part, too.”

Miller, too, understands the adopted caution.

“We realize there are accidents in that area pretty often, and we certainly wouldn’t want to do anything that makes it even more difficult,” he said. “But now that we know the reasoning, we’ll continue looking at many ways to market River City and the rest of downtown Wheeling.”