While you’re reading this, a little boy waits. He’s on the other side of the world, right now, in China. He goes to school there, he’s got friends, and his basic needs are met. He likes to dance and sing and be silly. Like most nine-year-olds, he’s a bit of a ham. Though he’s not much bigger than a four-year-old, his face is kind and his grin impish. Every year, Zhong’ao watches children around him leave China. He often asks his caregivers, “When is it my turn?”

Zhong’ao is missing two very important things in his life: the love of a family and healthy bones. He lives in a Chinese orphanage, where many international adoptions happen, but Zhong’ao’s brittle bone disease makes him a special needs child.

Dustin and Heather DeFranco want to be Zhong’ao’s parents, to bring him home to Wheeling and give him the love and the family he’s been longing for. And they want to give him the medical care he needs to lead a normal life. 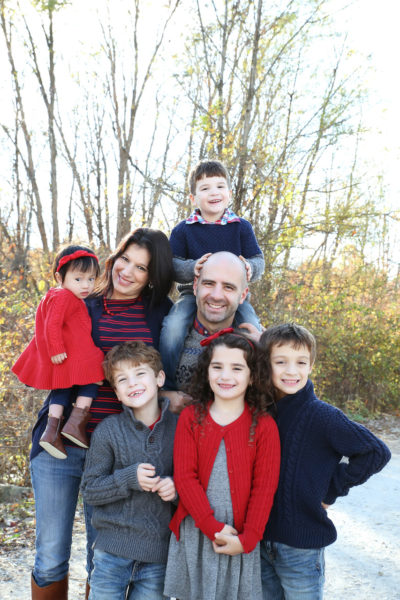 Dustin and Heather grew up in the Ohio Valley. He currently owns DeFranco Financial and she Snapshot Photography. They moved away for a time, eventually landing in Pittsburgh, but after the birth of their twins, Bruno and Rocco, in 2008, they realized Wheeling was the ideal place to raise a family. Daughter Lucy came along shortly thereafter, followed by a fourth child, Dash.

“At the time,” Dustin said, “we thought that kind of completed our family. I was working for JP Morgan and we had four children and we moved to our home down on Cecil Place and thought we were pretty well done.”

But then they changed their minds.

According to Heather, “At that point, we had four healthy kids. And we thought, Let’s help a child. That need for it to be a biological child wasn’t there. We said, ‘Let’s bring a child home that needs a family.’”

The special needs program presents applicants with a list of health conditions. Prospective parents must go through the list and decide what special needs they’re open to. Many of the health conditions felt overwhelming, brittle bone disease among them. The DeFrancos decided they weren’t up to the challenge.

Right before they were ready to be matched, however, Heather was perusing the waiting list. She’d found a girl, Xiao, with Osteogenesis Imperfecta (OI)—brittle bone disease—a disorder that results in fragile, easily-broken bones.

“We did a Google search and saw some frightening pictures,” she said. “It looked very scary and we both said, ‘no.’ But I just kept going back to her picture. There was something there. I just kept telling myself, ‘She’s the one. She’s the one. I just feel like we’re being called to her.’”

Heather and Dustin talked to specialists. They obtained Xiao’s medical files and x-rays. The little girl had broken over seven bones by 18 months old. It wasn’t a severe case of OI, but it wasn’t a mild case either. However, because she was so young, treatments in the US would help her bone growth. While OI cannot be cured, the symptoms can be treated during the patient’s growing years to give them the best chance at a normal life.

“We decided to take a leap of faith,” Heather said. “We traveled in October (2016) to bring her home.” That winter, the family took Xiao to Omaha for surgery to have rods placed in her legs. She also began bone-strengthening infusions. Though she’s broken three bones since her arrival, she hasn’t had a break since the second infusion.

And so the DeFranco family again thought they were complete. Though Xiao is very small and must be careful, she’s thriving. Still, Heather and Dustin couldn’t forget the other children they’d seen in China, especially the older ones. Most Chinese adoptees are baby girls. By the time a boy reaches four years old, his chances go down, and a child with special needs like Zhong’ao has an even slimmer chance of finding a family. Xiao’s new parents couldn’t forget the little boys they’d met.

Heather said, “Once you go over there and see those other kids—they ask, ‘When is it my turn?’ It’s really hard to watch. That’s kind of what led us to decide to do it again.” This is how they found their son, age nine, who has been waiting a long time for his family. While Xiao was in a small foster home, Zhong’ao lives in a large state orphanage with 500 other kids—so many that they have their own school. 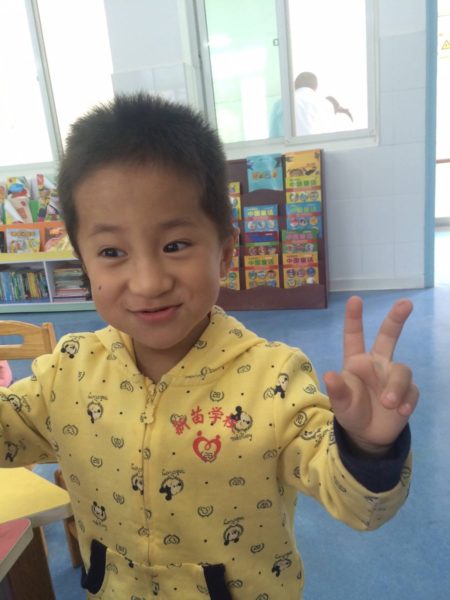 Dustin explained that China doesn’t have America’s social safety nets. “Parents just abandon their children—for whatever reason—because you cannot legally give up custody. Literally, abandon them. Xiao was left on a step outside the orphanage in the middle of the night. We don’t know her birthday. Some are left with notes; Xiao was not.” To this end, Zhong’ao’s medical file is a blank. It hasn’t been updated since he was 24 months old. The DeFrancos are hopeful that his OI will be manageable; in photos they see him standing and running, but the absence of a history means unanswered questions. When he arrives—hopefully next spring—his parents will begin the appropriate treatment for his needs.

Zhong’ao’s siblings can hardly wait to meet their brother. According to Heather, “All the kids are really excited. The boys want to go along on the trip. They especially were excited that Zhong’ao is their age. They really want to come to China this time to be a part of it.”

The DeFranco family will be holding a Lemonade Sale on Saturday, September 9. International adoptions are indeed expensive, and the event will raise funds to assist in Zhong’ao’s homecoming. However, Heather and Dustin have a greater purpose in mind: raising awareness through community involvement.

When they adopted Xiao, other parents in St. Michael’s Parrish began making meals for the family. Food kept appearing at the DeFranco home. Parents and families wanted to know how they could help. Moreover, they were truly interested in Xiao’s progress, following closely on social media whenever Heather posted a photo or an update. The community interest inspired Heather and Dustin.

“What we found through the process was that we had so many people that were so excited about it and wanted to be a part of it and help,” said Dustin. “And at the same time, we wanted to start doing something to raise awareness, not just for this specific case of international adoption, but for orphans and brittle bone disease. And we thought it would be a really nice way through this fundraiser to give folks a chance to 1) have a good time and 2) to be a part of it. This great city, valley, church, and parrish, and school—we just had so many people interested.”

The fundraiser will be a free, family-friendly event at Wheeling Park’s ice rink. Visitors will enjoy live music, a magic show, yoga, and a meet-and-greet with characters like Spiderman and Princess Elsa. Free food will be available. A Chinese auction will offer over $10,000 worth of prizes and participants can enter to win $500 cash. And while kids have fun with inflatables, face-painting, and balloon art, the DeFrancos hope that their own journey may quietly inspire others.

“Maybe someone comes to this event and sees this good, and maybe it’s someone who’s on the edge about taking on a foster child,” Dustin said. “Or they don’t know if they can handle adopting a child, period. And maybe they say, ‘I can do that.’ You know, a lot of these things that we think are so challenging…you don’t realize what you can do.” A year ago, the thought of a broken bone terrified Xiao’s father. Now, he can quickly splint a break without panic. Her arrival has taught the family they are capable of so much love and bravery, and that obstacles faced together can be overcome.

While families here the United States find themselves at odds over the dinner table and cities face violence and discord, children across the world hope only to find parents who will love them. They’re waiting, in limbo, not knowing if anyone will ever come for them. The DeFranco family hopes to infuse some good back into the world and to touch a few hearts.

“Come to the event,” Heather said. “Buy a glass of lemonade and know that you’re contributing to something that’s going to make a difference in this child’s life. Join us and share in this amazing journey.”

The Lemonade Sale will take place at Wheeling Park’s ice rink Saturday, September 9, from 11am-4pm. Admission, entertainment, and food are free. Donations can be made online at https://www.youcaring.com/lemonadeforzhongao 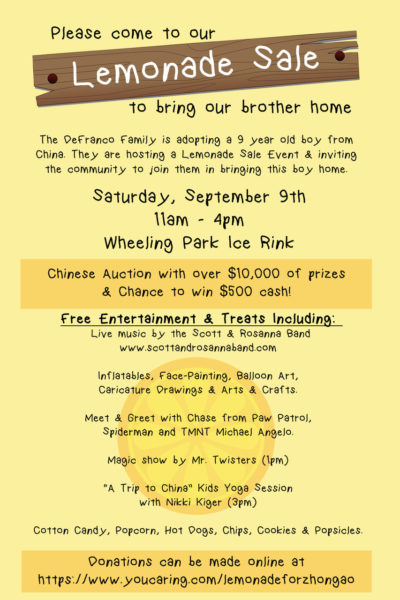