The Wheeling Symphony Orchestra welcomes guest artist Sierra Boggess for “Once Upon a Time,”  an evening of Broadway, Star Wars and Disney music, at 7:30 p.m. Friday, April 26, at The Capitol Theatre.

The concert will be conducted by John Devlin, music director finalist. 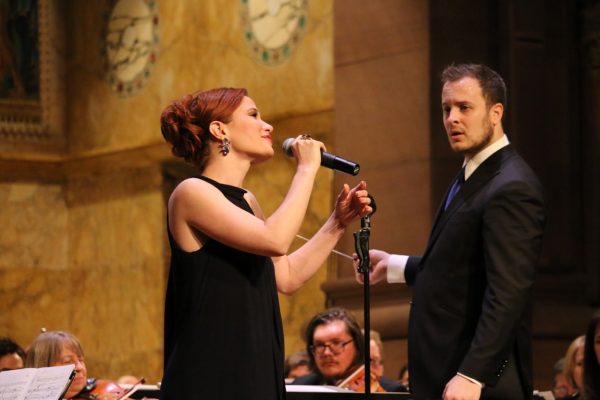 Sierra Boggess and John Devlin with the Princeton Symphony Orchestra.

Boggess is an Olivier nominated actress, best known for her role of Christine in The Phantom of the Opera on Broadway, West End and the televised 25th Anniversary concert productions. Boggess made her Broadway debut as Ariel in Disney’s The Little Mermaid, receiving Drama Desk and Drama League nominations, as well as the Broadway.com Audience Award for Favorite Female Breakthrough Performance. Her additional Broadway credits include Master Class, It Shoulda Been You and School of Rock. Boggess’ Off-Broadway credits include Love, Loss and What I Wore and Music in the Air, alongside Kristin Chenoweth, for New York City Center’s Encores! Series. In the West End, Boggess has appeared as Fantine in Les Miserables and originated the role of Christine Daae in Love Never Dies, the critically acclaimed sequel to The Phantom of the Opera, receiving an Olivier Award nomination for her performance.

Sierra Boggess as Christine in “The Phantom of the Opera”

Devlin is also a leader in designing concerts that frame orchestral music in new and innovative ways. His thinking has inspired many forward-looking concepts such as Gourmet Symphony, of which he is the founding artistic director, Go-Go Symphony, Seamless Symphony, Interactive Symphony and the New Retro Project. Devlin holds master’s and doctoral degrees from the University of Maryland School of Music and an undergraduate degree from Emory University.

“Sierra Boggess is one of my very favorite artists, and I am so excited to be collaborating with her once again in the show Once Upon a Time,” Devlin said. “Sierra is famous for her roles in The Little Mermaid and The Phantom of the Opera, so we have decided to center the show around favorites from Disney and Broadway. There is something for everyone on the program with all-time favorites like Guys and Dolls and My Fair Lady. We’ll also visit music from Pocahontas and Beauty and the Beast, and I’ve even snuck in a few of my favorites like Pirates of the Caribbean and Star Wars! The whole family will love this show, and we can’t wait to share Sierra’s amazing talent with everyone in Wheeling.”

Prior to the concert, patrons can purchase a pre-show, prix fixe dinner buffet, catered by Chef Charlie Schlegel of Ye Olde Alpha in The Capitol Theatre Ballroom starting at 6 p.m. Pre-concert dinner tickets are $25 for adults and $15 for children (18 and under).  For reservations, call 304-232-6191 or email boxoffice@wheelingsymphony.com.

Immediately following the performance, guests are invited to a free post-show reception with Maestro Devlin and other members of the symphony orchestra.

Tickets to Once Upon a Time start at $18.50 and can be purchased online at wheelingsymphony.com, by phone at 304-232-6191, via email at boxoffice@wheelingsymphony.com or in person at the box office, located at 1025 Main St., Suite 811, Wheeling. Patrons 18 or younger can get tickets for $7.50. Additional discounts are available for college students and groups of 10 or more.