Cabaret, the musical based on the Christopher Isherwood novella ‘Goodbye to Berlin’, and the Druten play ‘I am a Camera,’ will be performed at Wheeling Jesuit University April 7-10.

The show is based on the 1998 version and is set in a nightclub in 1930’s Berlin just as the Nazi party begins its rise to power. The story follows American writer, Cliff Bradshaw, as he arrives in Berlin in 1929, on the eve of a new year and the new regime in Germany. Centered in the seedy nightclub, the Kit Kat Klub,

Cabaret follows Cliff and the 19-year-old English cabaret performer, Sally Bowles, as they navigate their relationship, their dreams and their limitations in a world permeated by politics, economics and sexuality. 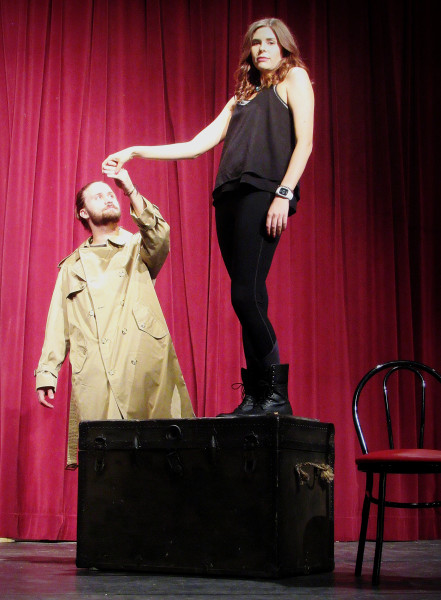 Wheeling Jesuit students will perform Cabaret for its annual spring musical. Shown are Sarah Sleevi, who plays Sally Bowles and Stephen Probert, who has the role of Clifford Bradshaw. Performance are April 7-10 at WJU’s Troy Theater.

Cabaret also follows the doomed romance between boarding house owner, Fräulein Schneider, and her suitor, Herr Schultz, a Jewish fruit vendor, who cannot seem to survive in the impending colder, terrifying Germany. The Emcee oversees the action at the Kit Kat Klub, as well as the parallel journey as Nazi Germany rises to power.

The cast of Cabaret includes: