She heard the knocks because she was still awake near midnight one late-June night five years ago. Two men, both in military uniforms, were standing there, and Linda Van Camp could barely open the front door to her home.

“No,” she said softly at first, but then each, “No,’ increased in volume to the point where it woke her husband, Don. No matter how much each of them wanted to deny it as reality, only then did it become real. Their son, David, who would have been 34 years old today, was dead.

“That was the worst thing ever. It was about 15 minutes until midnight, and I had just gotten up off the couch to go to bed. And I heard a knock at the door,” Van Camp recalled with tears flowing down her cheeks. “I remember thinking, ‘Who could be knocking at the door at this time of night?’ There were two of them.

“It was just like it is on TV. And then all I could do was yell, ‘No!’ And when I yelled for my husband to get out of bed, that’s all he said. ‘No!’ He didn’t want to hear what those men needed to tell us about our son,” she continued. “They didn’t have many details, but they knew that David had been killed in the line of duty.” 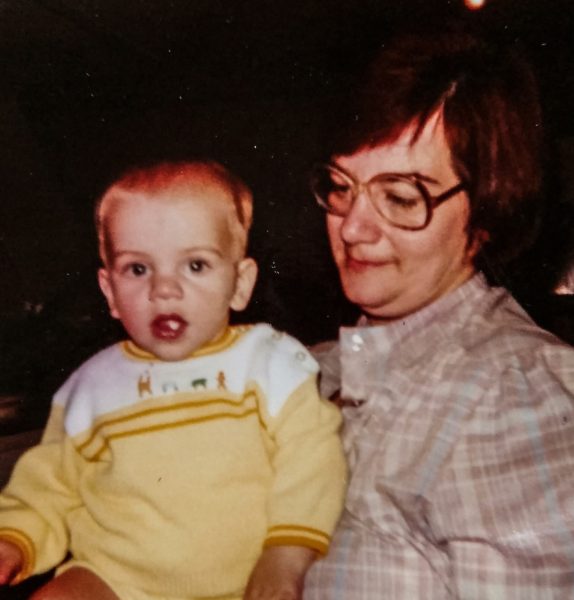 David with his mother, Linda.

Tragedy struck on June 29, 2011, in Badrah, Iraq, and David was one of three soldiers mortally wounded during a rocket attack.

“We heard one story that it happened when they were out in the field, but that’s not how it happened. David and a few others were on base when it happened. There were six guys in a tent, and three of them were killed by one of the RPGs that were fired at them,” Van Camp reported. “And a few of David’s battle buddies have told us what they saw happen.

“They were just playing cards in that tent. The three that didn’t get killed apparently had gotten up to go out and smoke. If David had gone to smoke a cigarette, he’d still be alive with those other boys,” she said. “They tried to save him in the infirmary, but his injuries were too much. And he died.”

David graduated from Wheeling Park High School in June 2000, and he then attended Marion Military Academy in Alabama, where he earned an associate’s degree in 2002. David, one of four sons, then returned to the Mountain State to attend Marshall University, where he earned degrees in both criminal justice and history. 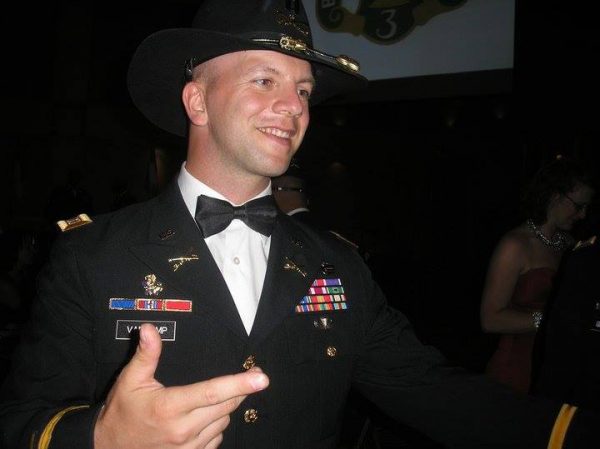 Van Camp was involved with the ROTC Program at Marshall University,

While in high school David was a member of Wheeling Park’s baseball team, and his mother never missed a game.

“I told my friends then that I wanted to watch him then because he wasn’t going to be playing for the rest of his life. But he was playing then, and I made sure I was there,” she continued. “He always loved putting on that uniform, and he played the game the way it was supposed to be played. I just knew that he would be going off to do what he was going to do after high school, so I wanted to be there for him while he was still here at home.”

Robby Given was a close friend of David’s, and even during their high school days he noticed that David had set himself apart from his favorite group of friends. 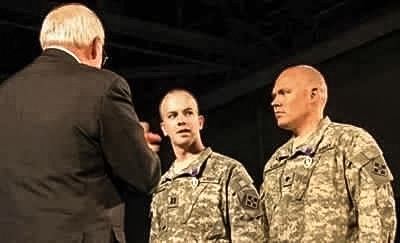 Van Camp was awarded the Purple Heart following his first tour in Iraq.

“There were seven or eight of us, and it was just like you’ve seen in the movies because we were all together every single day doing whatever it was we wanted to do,” Givens recalled. “And David and I played baseball together, and when I think about Dave back in high school, I knew he was an upstanding guy who was just as ornery and goofy as the rest of us, but there was a difference with him.

“He didn’t have the wishy-washy and questionable values that the rest of had at that time. We were still trying to figure out who we were, but he always seemed to already know who he was,” he said. “We all respected that about him. He was already an adult. David was already a man. He carried himself differently, and that’s not something I realized after his death. I realized that even back then.”

David’s mother saw it, too.

“He was his own person, and of course he did some things I didn’t know about until later in his life, and by that time all we could do was laugh about it,” Van Camp said. “And when he wanted to get involved with the National Guard, it was OK with us because that’s really what he wanted to do. 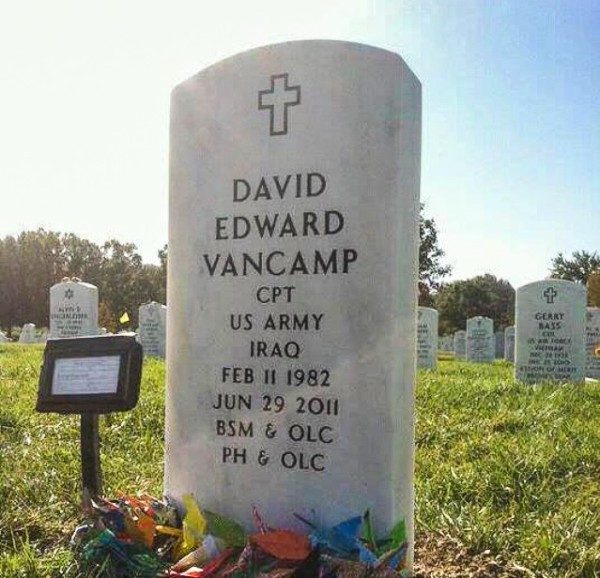 “He was finding a way to pay for his college because that wasn’t something we could afford for him. But it was something he wanted to do for himself,” she continued. “So that’s what he did. When David made up his mind, he went out and he did it. He was determined.”

Following his graduation from Marshall, David made the decision his mother expected. No longer would he flirt with the National Guard as an ROTC member as he did in high school and college. He was prepared for a commitment.

“He told me that was his job and that it was what he was going to do. He belonged in the military, he always told me” Van Camp recalled. “And when the deployments were something he had to do, I didn’t like that part at all, but he couldn’t wait to go to Iraq the first time. After he was there, though, he realized it wasn’t what he thought it was going to be. It was really different, and then he couldn’t wait to get home from over there.”

Near the completion of his first tour of duty in Iraq, David was injured in an attack perpetrated by a suicide bomber. 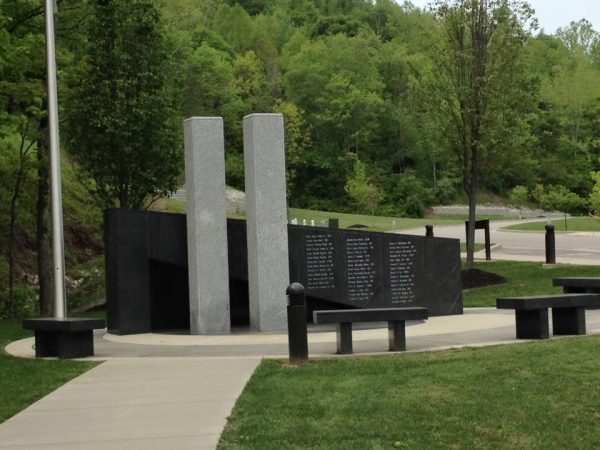 David’s name is included on this memorial monument at the West Virginia Police Academy. (Photo provided by Bobbie Hoffer)

“He and his platoon had been moved from one camp to another camp toward the end of his first tour because they were getting ready tome come home,” Van Camp remembered. “It was around six weeks before he was scheduled to come home, and after he and some other guys were getting out of their Jeep there was this guy dressed up like a lady who approached them.

“He walked up to the Jeep, and he blew himself up, and David was injured from that. They sent him to a hospital in Germany, and then the military sent him home to continue his recovery from that,” she said. “He had shrapnel injuries, but he didn’t lose any of his limbs like some of the other guys. Two of them were killed, and a couple of them lost arms.

“It was a suicide bomber, and I asked why they would do that. They didn’t gain anything, but that’s when I realized that this war didn’t make any sense. And David had a hard time with it, too.”

When he was healthy enough to travel back to the United States, David was hospitalized in Walter Reed, and then he was awarded the Purple Heart. He then has a choice to make – accept his discharge or renew his contract with the National Guard.

David renewed although he was well aware it would mean another tour in Iraq. 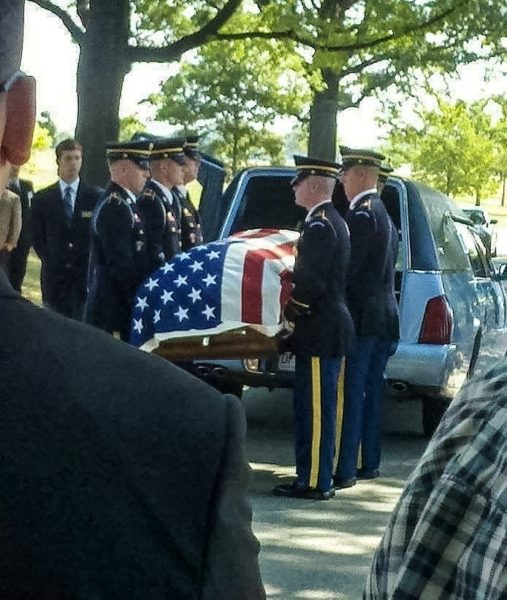 David was honored with a full military funeral service.

“He chose to go back again so he could stay in the military,” Van Camp said. “It was one or the other. He was doing office work in Georgia, and then he went back to a base in Texas before he went back to Iraq.

“I went to Texas to see him about a month before he went back to the Middle East, and that was the best thing I ever did. I’m so glad that’s what I decided to do,” she continued. “He was then scheduled to come home from his second deployment in August 2011, but that’s not when he came home.”

Instead, David was returned to his hometown on a Sunday morning in late July with hundreds of Patriot Guard members escorting him on their motorcycles past thousands of local residents who had lined the streets of Wheeling.

“When we were taking David to the funeral home that Sunday morning, I was really surprised to see all of the people along the streets. So many people were out. It made me really proud that so many wanted to honor him,” Van Camp said. “And then they had the bridge named after him and then the ballfield where he played so many of his games. 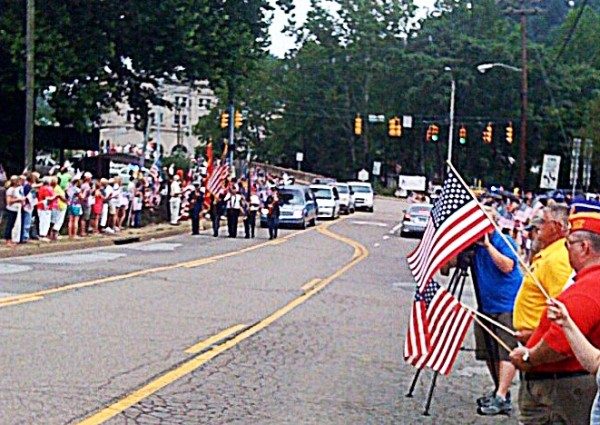 On July 24, 2011, David returned to his hometown with thousands of local residents lining the street of Wheeling.

“So many of his friends had no idea what they wanted to do with their lives, but not David. My son died doing exactly what he wanted to do and that was to defend this country and the people here.”

So many of David’s friends had failed to honor the American lives lost while serving for the United States military, and that included Givens. That, though, has since changed.

“In late June it will be five years, and that’s just hard for me to believe. It’s hard for me to believe that we haven’t had David for that long now,” Givens said. “I’m a little ashamed to say that before June 29, 2011, Memorial Day was just a day off in my mind. I knew what the day was about, but I had not lost anyone in my life in that manner before David. 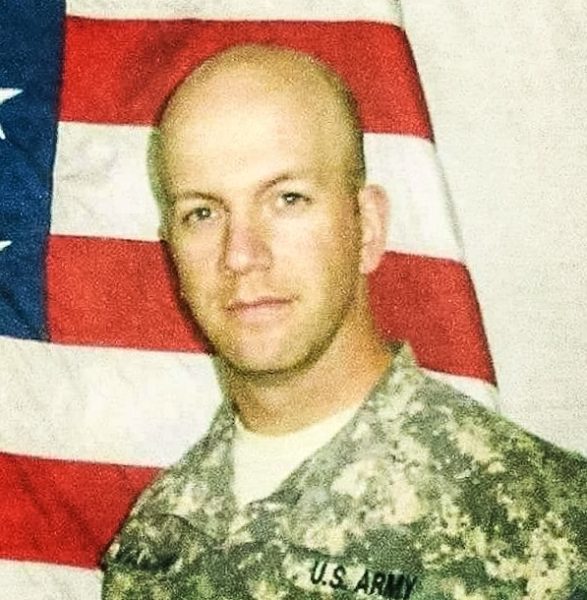 Capt. David Van Camp, a native of the Elm Terrace area of Wheeling.

“Now, though, it means everything to me. It’s now a day to reflect about everyone who gave their lives for our country, and it’s a day for me to remember David and what he meant to me as one of my very best friends,” he said. “I think about who Dave was, and what he could have been. It affects me deeply now. It really does.”

Givens is also dedicated to honoring his best friend every chance he gets, and one way he accomplishes that goal is serving as a board member for the Capt. David Van Camp Foundation. Each year the non-profit awards a $2,5000 scholarship to a graduating senior of Wheeling Park High who is heading to college. Those who apply must compose an essay explaining what David’s sacrifice means to them.

“It’s a part of our efforts to make sure David is never forgotten by the people in our community,” Givens explained. “We raised most of those funds by having a steak fry, and we have moved the date of that steak fry by a couple of months because it just seemed as if there was so much going on before the summer months.

“The steak fry this year will be in September because there’s not as many conflicts for people, and that will allow more to attend,” he said. “It’s been held at the Wheeling Park ice rink the past few years, and that’s where it will be again this year on Sept.17.

“But it’s not your normal steak fry. We have a lot of fun, and the food is great, but it’s all with David on our minds,” Givens added. “We talk about what he did for us and what he gave up for us. Think about that.”