The curtain opens on Towngate Theatre’s production of the dark, comic play, “The Cripple of Inishmaan,” on Friday, March 16.

The play is written by Martin McDonagh, writer/director of the film “Three Billboards Outside Ebbing, Missouri,” which received 43 major nominations for the 2018 awards season, winning 20 awards including two Oscars and four Golden Globes.

“The Cripple of Inishmaan” is set in the year 1934 and concerns a tiny community of Inishmaan residing at the Aran Islands, off the western coast of Ireland. The inhabitants of the island are pretty excited about the prospect of a Hollywood film crew arriving in the neighboring region of Inishmore for the purpose of filming a documentary on the lives of people living on the island.

Billy Claven, who is regularly referred to as Cripple Billy, sees it as an opportunity to escape the boredom, poverty and gossip of Inishmaan. To everyone’s surprise, despite being a social outcast and an orphan, Billy lands a chance to play a role in the documentary film…or as some believe.

“This is a really humorous and engaging play,” Oglebay Institute director of performing arts Tim Thompson said. “And while it is a darkly comedic play, there is a twist in the show that takes it from a comedy to a more thought-provoking story.”

Towngate Theatre technical director P.D. Gregg directs the show and said that he has always loved McDonagh’s work. “His work is really fascinating. It is definitely a different take on storytelling.”

Gregg said he thinks the show tells us an interesting story concerning gossip and truth. “The play is about how we tell stories to each other,” Gregg said. “Throughout the show, the audience gets different stories from different characters. Each story has its own consequences and the audience is left with deciding on where the truth lies … and does the truth truly matter?”

Towngate’s production of “The Cripple of Inishmaan” has a great cast of Towngate veterans and younger community actors. 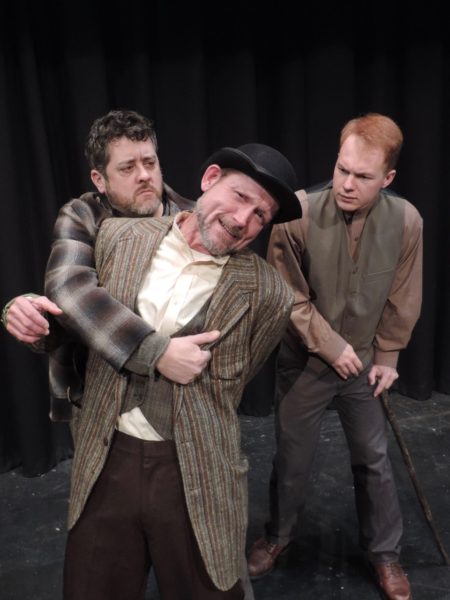 Cast members, from left, Vincent Marshall, Eric Dutton and Brendan Sheehan rehearse a scene from “The Cripple of Inishmaan.”

“One of my intentions when we selected this play was to get the best actors,” Thompson said. “And we did just that. We have an amazing cast. The cast has some of the best veteran actors in the Ohio Valley.” 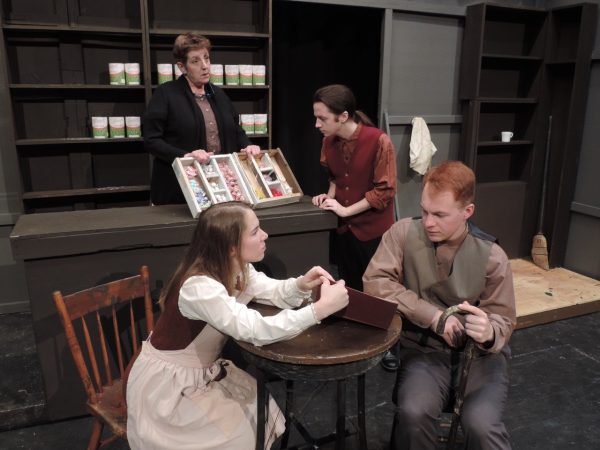 The Friends of Towngate will present two “Pub Nights” in conjunction with Towngate’s production of “The Cripple of Inishmaan.”

Events take place in The Gallery at Towngate immediately following the March 16 and March 23 performances, from approximately 10 p.m. to midnight. Irish food will be provided by Ye Olde Alpha, with beer provided by Carenbauer Distributing and Wheeling Brewing Company. Gallowglass and The Troubadour with Karissa Martin will perform on March 16, and Matt Smith and The Troubadour perform on March 23.

Proceeds support Towngate Theatre. Admission is $25 per person and does NOT include show ticket. Purchase tickets at oionline.com, call 304-242-7700 or contact a member of the Friends of Towngate. Space is limited at each event.