It’s a 5K jaunt and a scavenger hunt that is part race and part urban exploration in downtown Wheeling.

But “Challenge Wheeling” also is much more.

It’s a fundraiser for Youth Services System that offers cash prizes, an Italian feast, and an education on the first capital city of the Mountain State. It’s also taking place on West Virginia Day and will include interaction with the events taking place at Independence Hall and with the annual Wheeling Arts Fest.

But unlike any other race in the area, this one does not mandate a set course, and the participating teams have from noon until 3 p.m. to complete the five kilometers while formatting answers and taking photographs pertaining to the 12 clues each team receives just before the beginning of the event. 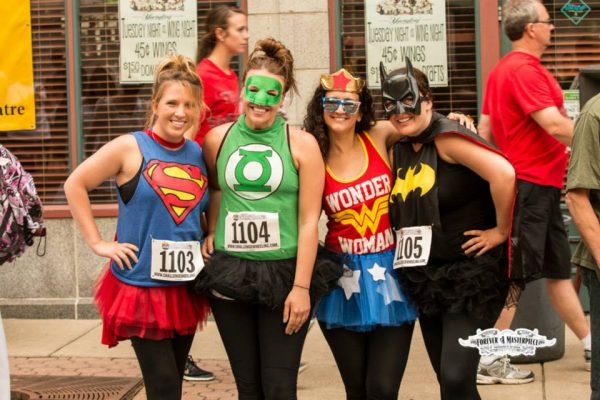 It’s physical. It’s mental. And one’s smartphone most definitely comes in handy along the way.

“We want everyone to enjoy themselves, and that’s why we make it so you’ll learn something new about Wheeling, but we also do not make the clues too difficult. It’s not about trying to stump you, and that’s why the smartphone is useful because you are allowed to Google on it during the race,” said co-director Christie Contraguerro of sponsor Carpet Showcase. “We want the racers to enjoy themselves, and after last year’s event we’ve had many people tell us that it was the most fun they’ve ever had in downtown Wheeling.

“And it’s not about the race itself because there’s so much more that goes into it overall,” she said. “After the racers go from clue to clue, they come back to River City and that’s where we have our after-party.”

The teams must include at least two members, and the participants have the choice of dressing in costumes or not. Each team member will pay a $25 registration fee with every dollar flowing to YSS, and the course is appropriate for folks of all ability levels. Registration will continue through June 15, and can be completed by visiting: http://www.challengewheeling.com/.

Registration will begin at River City Restaurant on the corner of 14th and Main streets, and following the start of the race, the course is the choice of each individual team, and at least 11 of the 12 clues must be answered correctly to be eligible for the prize money. Participating teams have the chance to win $500 for first place, $100 for second place, and $50 for third. 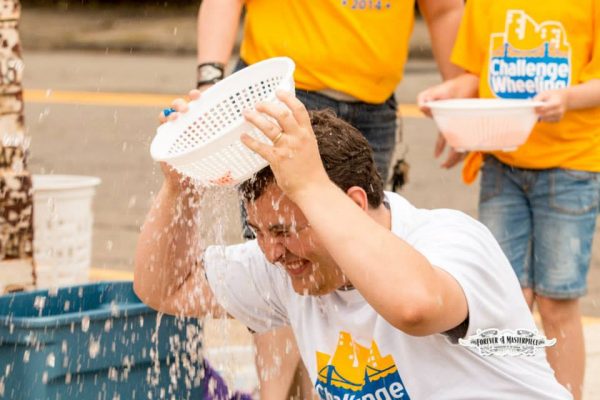 Cooling stations will be located along the areas in which the clues are located.

During the inaugural event last June, the fastest finishers arrived at the finish line at River City under 1 1/2  hours, but finish times will be recorded up until the three-hour mark. “Challenge Wheeling” is a “rain or shine” event, so racers should consider comfort when choosing their attire. Riding public transportation and running/walking are the only methods of travel permissible during the event, so the use of bicycles, automobiles, and taxicabs is not permitted.

And there’s one more rule to consider.

Team members must remain together throughout their ventures instead of scattering about the city because selfie photos of each complete squad at each clue location are required during the competition.

“We had one clue location that was on the ground, so the teams had to figure out how to get everyone in the selfie,” said Tammy Kruse from YSS. “That’s just one way we try to make this a really fun, competitive event for those who sign up.

“This event also gives us a chance to celebrate the fact that people are in the downtown running and walking and exploring the area maybe for the first time in their lives,” she continued. “And most of the people who participated did so in costumes, and that was just awesome to see in the downtown.” 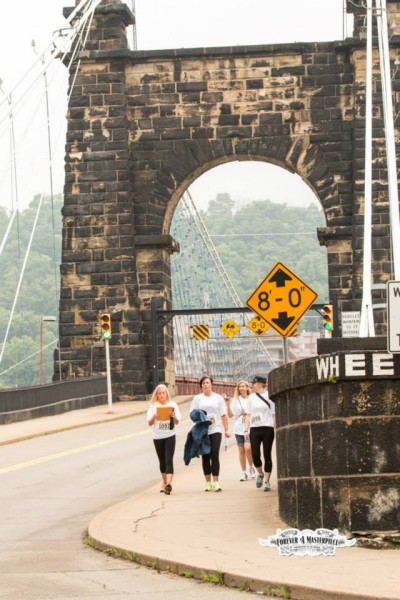 The downtown Wheeling area is packed full of historical structures like the Suspension Bridge.

“Challenge Wheeling” will incorporate both the historical festivities at Independence Hall and the presence of Arts Fest near WVNCC.

“This year’s event is on West Virginia Day, and that’s a big day here in Wheeling,” Kruse said. “Not only will be there be a lot of activity at Independence Hall, but we will also have Arts Fest and the unveiling of the Francis Pierpont statue on the corner of 16th and Market streets.

“Part of ‘Challenge Wheeling’ is celebrating the city and its rich history,” she continued. “There’s so much history that many people do not realize, so we know there’s a lot of learning that takes place during the event, as well.”

It was Contraguerro who brought this idea to her hometown after competing in something similar in the Pittsburgh area.

“I ran it with some of my family members, and we all agreed that it would be a fun thing to do in Wheeling. I had a blast doing it,” she said. “We have a lot of things to do in Wheeling, but as far as an event like this one, we didn’t have anything similar to it. All of the races in our area are more about training and competition.

“And there are so many people here who are embracing our city now instead of just talking negatively about it, so I thought it would be a great fit. And then people were agreeing with me about it.” 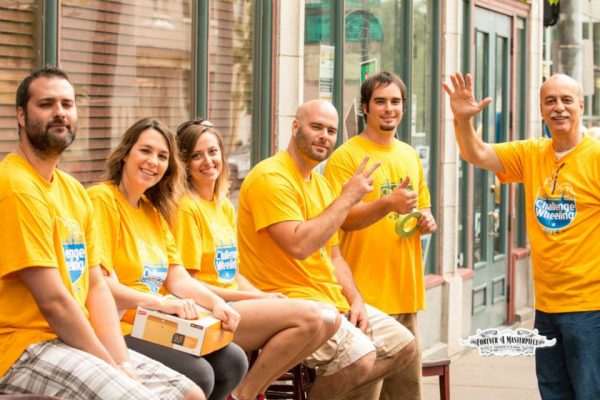 Volunteers for the event await the winners outside River City.

The first person she proposed it to was Kruse, and without hesitation she agreed.

“When she told me about it, I was in from the beginning,” Kruse recalled. “And everything I have heard about it has been very positive because of everything that goes into the whole thing.

“And the proceeds go to the many great programs that we have at YSS that do far more for the people of this community than most realize. But that’s OK because that’s what we do, and when someone needs YSS, it’s there to serve because of great events like ‘Challenge Wheeling.’”

“We were surprised because it was something totally new to the people of this area, so we didn’t know what to expect,” Contraguerro said with a smile. “But we pulled it off, and we are building on it for this year because we asked our racers how we could improve it in the future.

“This year we will have a full buffet for the after-party, we’ll have more water stations along the course, and we’ve also added a lot of door prizes that we will be giving away during the after-party, as well,” she added. “It’s fun for a group of friends, and it’s great for businesses as a team-building exercise. And no matter what, you will see parts of the downtown Wheeling area that you have never noticed before.” 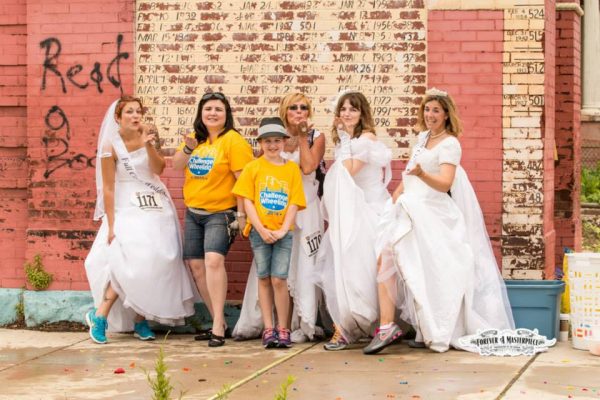 The Brides attracted a lot of attention no matter what clue they were solving.