The far left of the three lanes along Interstate 70 would become the “slow lane” on the climb up Two-Mile Hill if Ohio County Sheriff Tom Howard gets his wish.

Howard, now in his second year of a four-year term, has met with U.S. Rep. David McKinley (R-WV1) to suggest several ways he believes safety can be improved along the freeway. Along with the change of making the eastbound “slow lane designation,” Howard also has suggested additional cable-based guardrail systems capable of halting a vehicle from crossing the grass median and into oncoming traffic.

“From Mile Marker 6 to Mile Marker 10, there is not much guardrail in place on the westbound side, and that’s the area where most of the accidents take place,” Howard reported. “As far as Ohio County, that’s where most of the accidents are happening, and that’s also where the fatalities are taking place. That’s why I am fighting to get a cable-based guardrail system be put into place.

“The speed limit is still an issue and that’s also part of what I have discussed with Rep. David McKinley, and he has been very supportive,” he said. “I have had the opportunity meet with Rep. McKinley in Washington, D.C., and he does agree with the points that I’ve made about this particular stretch of interstate.”

In the past five years, Howard discovered that the Ohio County deputies have responded to 449 crashes along or near Two-Mile Hill, which calculates to one crash every four days during the researched timespan. Five of the accidents proved fatal, and six collisions have caused serious bodily injury.

A total of nine accidents involved cars, trucks and/or tractor-trailers that at least entered the median if they did not completely cross it. Four the nine produced head-on collisions, only two were caused by snowy or icy conditions, three resulted in DUI citations, and 11 crashes did not result in injuries.

“What I want to do is make this area safer for the residents of Ohio County, but also for all of the motorists on Interstate 70. It’s a very busy freeway; I can tell you that,” Howard said. “If we can get this done, I firmly believe it will save lives, and a big part of my job is to protect the public.

“I am aware that when Sheriff Butler requested the reduction with the speed limit, and he was successful at getting it to 60 mph, but I would like to see that number reduced a little more,” he said. “I know it’s going to be an issue because it’s not easy for those truck drivers to come down that slowly on that grade. That’s why I am approaching this process with a goal of not creating new problems.” 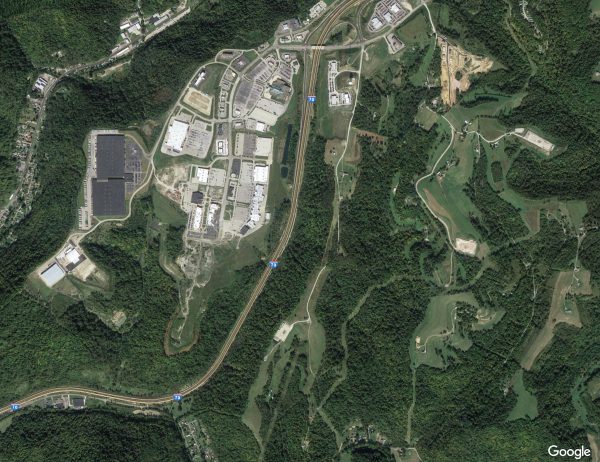 Sheriff Howard feels far too much of I-70 westbound is without guardrails between mile markers 6 and 11. (Google Earth)

The cable-based barriers were introduced in the United States in the 1960s but not used often by state departments of transportation until the late 1990s, according to Howard, and the cables cause less damage and are cheaper to install compared to the commonplace guardrail.

“A local resident can see what a cable-based guardrail system looks like; they can see it soon after they pass The Highlands heading eastbound. There’s one there that goes all the way to the state line,” Howard explained. “Now, when people see it, they usually think it’s not strong enough to hold back cars and especially the tractor-trailers, but it definitely is because of the way it’s designed. Those cables are all linked, and when something hits them, they work together to hold back of the car or truck.

“It’s important to keep people from crossing that median; it’s going to stop the close calls and the deadly collisions from taking place. If you drive in that area now, though, you will see a lot of tire tracks in that median,” he continued. “Those kinds of accidents have taken place all along that westbound stretch from The Highlands entrance to I-70 west all the way down to where the electronic sign is located near the 6.5-mile marker, so that cable system would have prevented them.” 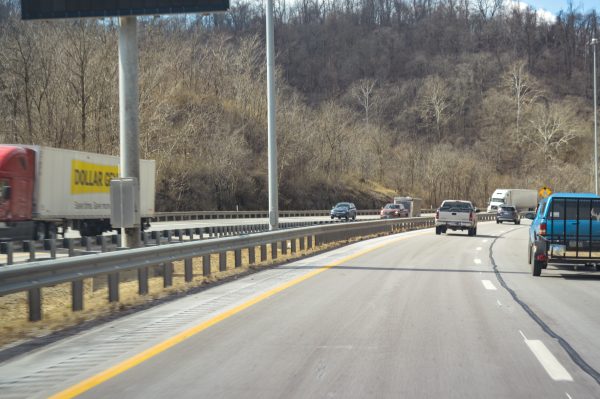 In a few areas along Interstate 70 westbound, steel guardrails are in place, but Sheriff Howard would like to see more safety added.

Howard’s second significant suggestion is to re-establish the recognized “slow lane” along the climb up Two-Mile Hill. While the usual right-lane designation works for a few miles once east-bound motorists leave city limits, the closer travelers get to Exit 10 for The Highlands area, the more dangerous the traffic pattern becomes.

“There are certain areas of interstate in the country where the Federal Highways Administration has approved moving the slow lane to the far-left lane, and that’s exactly what I believe needs to happen on Two-Mile Hill,” Howard confirmed. “And I believe that because of the amount of congestion there always is around the Cabela’s exit near the 10-mile marker. That’s another area where we see a lot of accidents because it sometimes looks like a real-life game of ‘Frogger’ because people are trying to get to that exit.

“If we move the slow lane to the far-left lane, those truck drivers would have a clear shot to the Pennsylvania state line,” he said. “It would place them away from the Cabela’s exit, and that would be a very good idea because that’s a very short ramp before you turn left or right, and with the new Sheetz opening soon, we expect the demand for that exit to increase even more.” 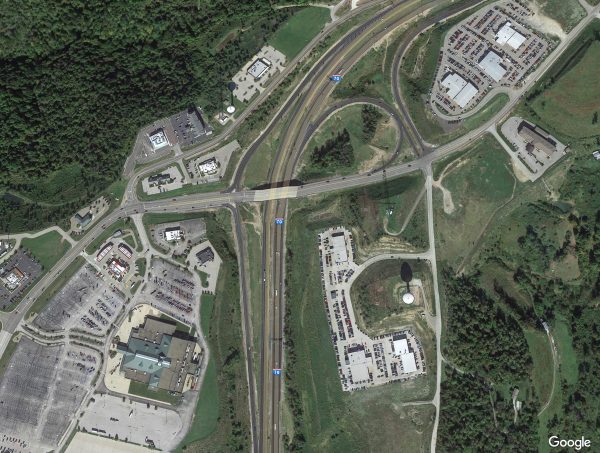 Accessing Exit 10 for The Highlands can be difficult depending on the amount of tractor trailer traffic on Two-Mile Hill. (Google Earth)

The entire stretch of Interstate 70 in Ohio County soon will undergo a multi-year project involving 25 bridges and ramps beginning in 2019, and local and state DOH officials currently are preparing for the big process. The Road Bond project is expected to cost between $175-$200 million for re-decking overpasses, completely replacing two bridge systems east of Wheeling Tunnel, and securing and painting each of the 25 included.

In both the east and west directions, as many as 60,000 vehicles travel the three lanes of Two-Mile Hill, according to WVDOH traffic studies. Whether or not Howard’s slow-lane switch suggestion could be included is unknown at this time, but the sheriff is aware the price tag would not be an inexpensive one.

“There most definitely would have to be signage and maybe some lane paint to remind them, and I realize it may take a little while for everyone to get used to it because of how rare the areas are around the country,” Howard said. “Now, I think local residents would catch on very quickly, and I believe the truckers would, too, but maybe not the rest of the thousands of other residents would.

“Everything would remain the same along the westbound lanes, as far as the traffic pattern,” he continued. “I am sure that these improvements will cost a few million dollars, but then I have to ask how much one life is worth? I ask that because that’s what we’re trying to do here.”

If ultimately approved and implemented, however, the left-lane slow lane would represent only one of several confusing traffic patterns from the Ohio border to the Pennsylvania state line. Not only are westbound travelers met with the mind-bending one-lane access to I-70 over the Fort Henry Bridge, but eastbound travelers in the same area must navigate illegally when emerging from the tube to be able to access Exit 1B to W.Va. Route 2 southbound. 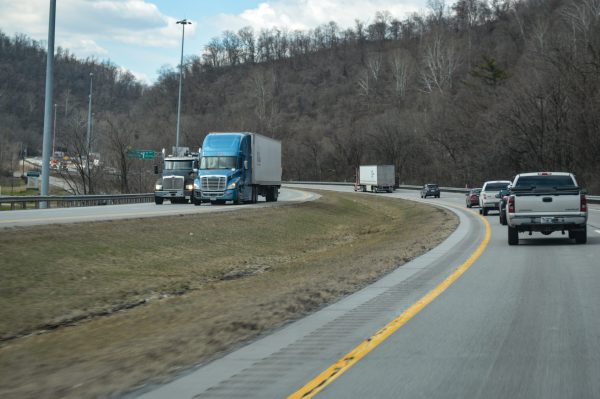 This is one area the sheriff hopes to add cable-based guardrail systems.

A plethora of accidents have been reported where I-70 and I-470 eastbound intersect in Elm Grove, and access issues also exist near the Bethlehem exit along I-470.

“We are well aware of the issues near that Bethlehem exit, but it doesn’t involve the same density of traffic as does The Highlands exit, and there is also an issue with the amount of space between where Ohio County begins and how short the distance is to that exit,” Howard said. “If the slow lane was changed in that area, I believe it would have to start on the Ohio side.

“That steep hill into Elm Grove on I-470 that leads to the merger of the two interstates in Elm Grove is another area where we see a lot of accidents because of the speeds but also because you can have four lanes of interstate traffic that is forced into two lanes very quickly,” he explained. “That’s been a bad intersection since they built it that way, and I don’t know what the solution is in that area other than to advise local residents to be very careful.”

Howard acknowledged his ideas, even if approved, will not take place next week, and maybe not even next year, but the sheriff’s plans to continue his discussion with Rep. McKinley and to meet with DOH District 6 engineer Gus Suwaid.

“I have yet to sit down with Gus, but I am hopeful those talks will happen in the near future,” Howard said. “Because of the weather and other factors, he has been a very busy man this winter, so when the weather lets up, I will ask to sit down with him,” Howard said. “Trust me, I wish I could wave a magic wand and make all of this happen overnight, but that’s not how this works.

“I can tell you that we will keep pushing it, though, because I am very confident that local residents will appreciate it and that it will create a safer atmosphere for the motorists,” he added. “The cable guardrails will save lives, and I hope residents of Ohio County can imagine just how more convenient this would make it for the folks going up that hill to The Highlands. It would be night and day.”