He makes visits to local middle and high schools in order to recruit students to the Culinary Arts Program he chairs at West Virginia Northern Community College’s Wheeling campus. His demonstrations, though, are what they are because Kefauver also is aware he’s teaching children how to improve their quality of life.

“I really don’t know if they go home and tell their parents they can cook dinner, but I do know that I get their attention,” the certified executive chef said. “I have had students that I’ve met come up to me while I am working one of my jobs just to say hi, and when that happens, I find that the students are taking more home than I thought they were.

“The overall concept does include them taking the information home with them so they can try to instigate some change with the way the family’s meals are prepared. And, if Mom and Dad are already trying to introduce a healthier diet to their families, these presentations seem to make it an easier path for the parents,” Kefauver said. “Too often, do we allow convenience to dictate what’s for dinner, so maybe that changes. That I cannot tell you with total confidence, but I hope it helps.”

His foodservice career began at Clarksburg Notre Dame High School, where he served food to classmates and was paid in food, and Kefauver continued in the industry while attending Wheeling Jesuit University. After completing a business degree there, he advanced to West Virginia Northern’s Culinary Arts program. Since Kefauver’s commencement, he’s worked in food service in West Virginia, North Carolina and South Carolina while employed in education, at restaurants, in health care, with stadium food at West Virginia University and in the catering industry. 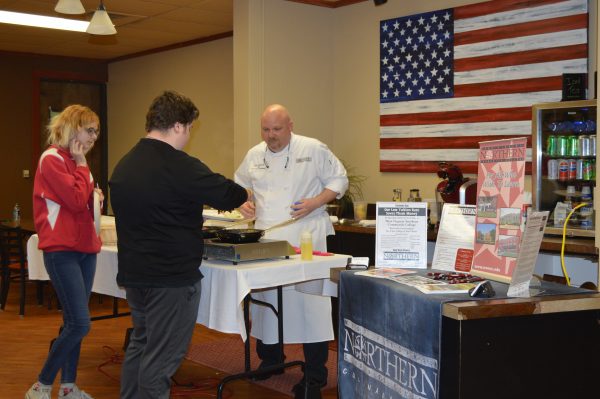 Kefauver prepares food and feeds students at local schools in an effort to educate them about healthy foods and the culinary arts program at West Virginia Northern Community College.

“When I make the visits to the middle and high schools, the students who are interested in food service usually ask me about my career and what I’ve had to do to get to where I am now,” Kefauver explained. “But overall, the underlying goal is to recruit, yes, but I do get to help the students learn about healthy cooking. I’ve introduced them to things like whole wheat pasta, and we’ve also discussed vegetables. Yes, vegetables, even without Ranch dressing.

“When I visit the high schools, I introduced our Culinary Arts program to the students, yes, but I cooperate with the teachers as far as what they’ve been working on through the school year,” he said. “Most of the time I do some sort of cooking demonstration, and we discuss whatever questions they may have. Some of the students I’ve met in the process are very interested in cooking and eating as healthy as they can.”

This spring, the chef has paid visits to St. Vincent de Paul School, Oak Glen, Wheeling Park High School, John Marshall High, and a few schools in Jefferson and Marion counties, and Kefauver has prepared everything from pasta to Korean barbecue to Steak Diane. 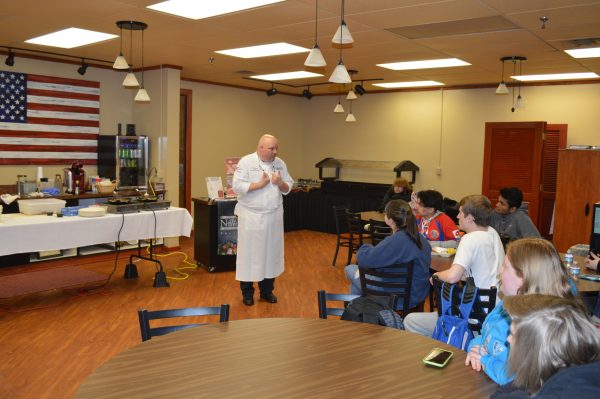 During his presentations, Kefauver offers his advice about how to improve one’s diet, and he fields whatever questions the pupils may have.

And the students get to eat, too.

“That’s their favorite part, I’m sure, but I know my trips do make the students aware of West Virginia Northern, and I have had students in my classes that I initially met at their high schools,” Kefauver said. “Even though our culinary program has been in existence for several years, I still run into students and teachers who had no idea it’s one of the programs at the college.

“If they express that they are not interested in the culinary field, I make sure I share with them the other programs we do have at West Virginia Northern,” he explained. “There are many, many things to take into consideration by the students and by the parents when making the decision on colleges, and one of the things I suggest to them is to at least visit three different schools before making a final decision.” 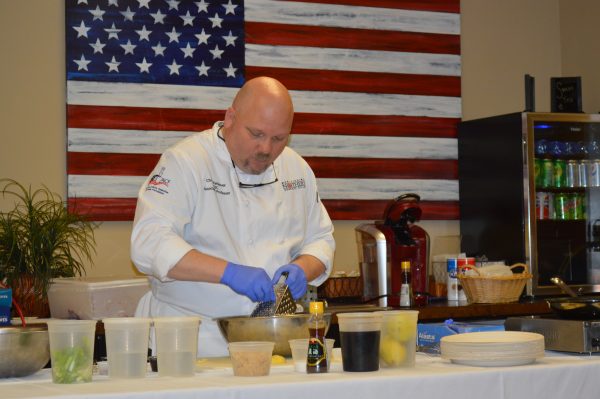 Kefauver transports all the ingredients and the equipment he needs to perform the culinary demonstration in local middle and high schools.

“The number of electives that we offer at Wheeling Park is very impressive to me, and the administrators there work very diligently with our community to be able to accomplish that,” she said. “The culinary arts is a great way to make a living, and I say that knowing several people who traveled that direction after graduating from Wheeling Park.

“That’s why, I believe it to be very important for Chef Chris to visit our high school or one of the middle schools every year because it presents the opportunity to those interested, but he also teaches them how to prepare healthier options,” she said. “Our society, as far as what we eat, is much more aware than ever before, and he reinforces one of the goals we have for our students.”

Since 1972, West Virginia Northern’s culinary arts department offers one- and two-year programs that are accredited by the American Culinary Federation. It is the most tenured culinary course in West Virginia and one of only two with ACF certification. The facility features a state-of-the-art double kitchen and a full-service dining room, and students from Jefferson, Belmont and Monroe counties pay the same as those from the Mountain State. A “Metro Tuition Rate” is available to high school graduates in Washington County in western Pennsylvania. 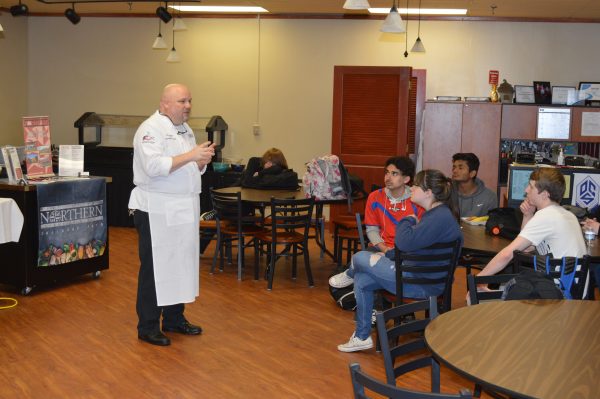 A question-and-answer session always follows the demos by Chef Chris.

Classroom instruction involves a curriculum that covers contamination issues, recipes, seasonings, proper cutlery use, a variety of cooking techniques, the local job market and the challenges most chefs face during all stages of their careers.

“I have business owners calling me all of the time about our students because they have openings they need to fill,” Kefauver reported. “Locally, there seem to be more jobs than there are people to fill those positions, and that’s because in the last 15 to 20 years we’ve seen the number of restaurants increase because of the developments in Ohio and Belmont counties.

“One point I do make with my students is that there is that ladder to climb in the culinary field,” he said. “That way they know what to expect when they get started and look to move their career forward here in the Upper Ohio Valley. All it takes is hard work, creativity and the ability to make really good food, and that’s exactly what we offer in our program.”