It was similar to shopping in, say, downtown Wheeling, but with two very notable exceptions.

There was that roof, of course, and the warmth, too, inside those glass doors of the Ohio Valley Mall.

Once it opened in late 1978, the Ohio Valley Mall immediately welcomed a consistent throng of shoppers from all over the Upper Ohio Valley as local residents abandoned downtown districts for the convenience of the area’s largest one-story structure. From above on Interstate 70, the mall seemed larger than any factory or steel mill along the Ohio River, and it was developed by the Caffaro Co. on reclaimed land that once was a surface strip mine.

For several years while walking through the main entrance of the Ohio Valley Mall, visitors had Elby’s Family Restaurant on the left, and Scotto’s Pizza and Wendy’s were down a bit on the right next to King’s Jewelers. From the water fountain in the center, J.C. Penney and Sears were to the left, Montgomery Ward’s and Kaufmann’s were to the right, and L.S. Good was dead ahead, and in between those anchors were retailers such as The Limited, Merry-Go-Round, Zide’s Sporting Goods, Ritz Camera, Foot Locker, York Steak House, 579, World Bazaar, Chess King, National Record Mart, Walden’s Books, and the Aladdin’s Castle arcade.

There were no lounges with televisions or play areas for restless children, but there were those large, round metal ashtrays that dotted the mall’s halls. There’s no telling how many laps were walked, but for most date nights couples alternated through the years between a meal at DiPomadorro’s before a flick to a drink at Abbey’s Lounge after the showing.

The Ohio Valley Mall was where people would see people, and then whisper about them without talking with the person, and it was the place some boy might finally get up the guts to finally talk to that girl – or vice versa. There were the orange-and-black letterman jackets strolling around, and they joined those in purple, red, scarlet, green, maroon, and red, white, and blue. The kid crowd at the mall grew significantly once the high school football season ended, and that meant the arcade near the restrooms was chaotic and out of quarters, and the mall movies swiped patrons from all other theaters throughout the valley region. 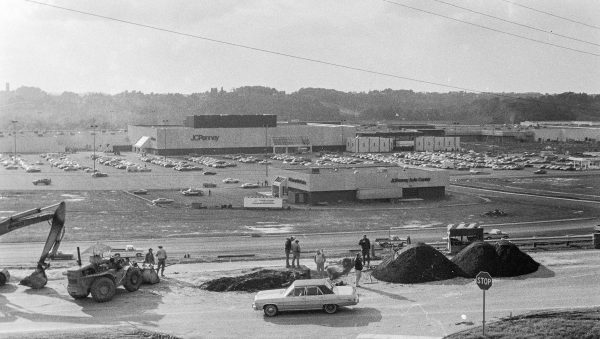 The Ohio Valley Mall opened in late 1978 by the Cafaro Co., but was a completely separate project than the proposed downtown mall in Wheeling.

And at this time of year, there was Santa Claus, too, initially perched up several steps with his elves to assist each child on the journey to St. Nick. These days, though, Santa and his little helpers are grounded and surrounded by trees and twinkling lights of the Christmas season. Some of the kids still cry, but the majority of children have always climbed up on his lap and recited specific lists because, well, it was their one and only chance to have HIS undivided attention.

According to Santa, of course.

“This is definitely the busiest time of the year, that’s for sure,” said Belmont County Commissioner Mark Thomas. “The owners of the mall have always decorated the building very nicely during the shopping season, and Santa Claus has been a must since that first Christmas.”

The vast majority of the mall’s spaces have changed names – only the Carmike Cinemas, King’s Jewelry, Spencer’s, Foot Locker, and Sears have remained the same over the past 39 years, according to Thomas. Kaufmann’s is now Macy’s, J.C. Penney’s changed to Levin Furniture and then to Boscov’s, Elder Berman, which was Stone & Thomas, is now Marshall’s, and Pat Catan’s currently fills the spot occupied by L.S. Good, Stone’s, Burlington Coat Factory, Steve & Barry’s, and Crafts 2000.

And these days, shops like Victoria’s Secret, Buckle, Men’s Warehouse, Kitchen Collection, and MasterCuts lease areas, and Tilt, a large arcade-like business, is scheduled to open in the spring of next year.

“The Cafaro family, in my opinion, has remained very committed to the Ohio Valley Mall, and the recent renovations and the addition of Boscov’s in 2013, to me, is proof of that,” Thomas said. “They have also added a lot on the perimeter, too, like Chipotle and Buffalo Wild Wings and several others, and with the employees from the gas and oil industries, the mall has done pretty well. 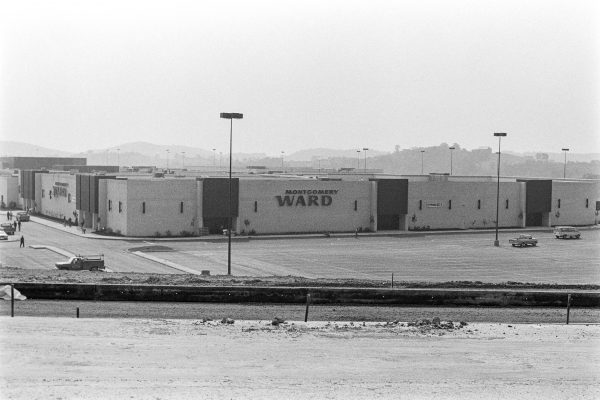 “The Commission’s primary indication as far as how the mall businesses are doing is the collection of sales taxes,” he continued. “Our budget in Belmont County is about $22 million, but that number has fluctuated over the years, but that’s because of the amount that’s been collected. We really depend on those dollars to be able to provide a lot of different services for the residents of the county.”

What the future holds for the Ohio Valley is unknown now, but a reduction of in-person shopping has been realized because of e-commerce options, and Kmart closing after many years of operation, Thomas believes, is a prime indication of the consumer shift.

“We’ve seen a lot of stores come and go at the Ohio Valley Mall, but most of them have closed because of bad business plans or because consumer trends have shifted away from what those businesses provided,” the commissioner explained. “But when you see a bigger operation like Kmart have to close, it makes you look around for reasons why.

“I tell people that if they can find it at the mall or at the Ohio Valley Plaza, go there instead of getting it online,” Thomas said. “And if you can’t find what you want at those two places, please go to The Highlands in Ohio County, because this trend is impacting that development, too. I know shopping online is convenient, but it’s taking its toll.”

According to a recent article published by The Wall Street Journal, in fact, Credit Suisse analysts reported that more than 8,600 stores across the country have closed this year alone, and about 25 percent of all shopping malls are expected to shutter during the next five years.

“I don’t think anyone really knows what the future holds here,” Thomas said. “But I do know that people are always going to need things like shoes and clothes and everything on sale now at the Ohio Valley Mall and at the plaza. It’s all going to depend on what the consumer chooses to do, and it was the same situation when shoppers chose indoor shopping instead of doing it in those downtown areas.

“But when it first opened, the mall was definitely the place to go and be seen,” he added. “It was a place you went to even if you didn’t want to shop, and we still see that same thing these days.”