It’s right there in the Tremont neighborhood of Cleveland, in the shadows of the area’s steel district at 3159 West 11th St. just 165 miles from downtown Wheeling.

The structure now appears as it did in the holiday classic, “A Christmas Story,” mustard yellow with green trim, thanks to the 2006 renovations financed by fan Brian Jones. And yes, that “major award” does shine brightly in the Parker’s front window.

Today, the house rests on one side of West 11th, and across the street is a large gift shop and a museum where a plethora of artifacts can be visited. Depending on the time of year parking can be challenging, but a next-door neighbor does open up his yard for $5 per spot.

“At this time of year it’s easy to fit everyone in,” said one of the parking attendants. “But as soon as it’s November, it can get a little crazy around here. The closer it gets to Christmas, the line to get in gets long and longer and longer.”

But without the movie “Porky’s,” a 1982 film about the teenage escapades of students from the fictional Angel Beach High School, the world would have never received “A Christmas Story.” 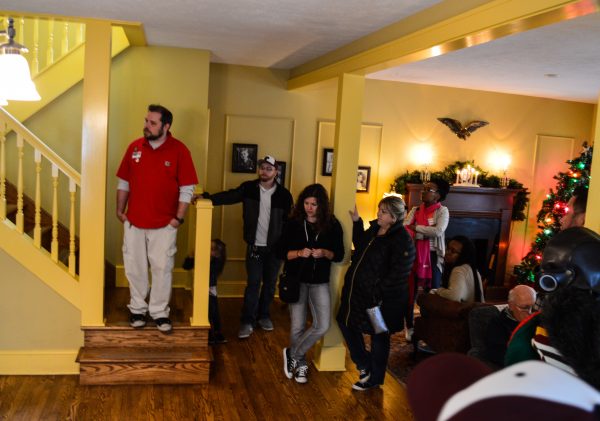 The tour guides offer insight with unknown tales behind the filming and success of “A Christmas Story.”

It’s true, too, and that’s because director Bob Clark parlayed the box-office success of “Porky’s” with the decision makers of MGM Studios because of his longtime desire to make author Jean Shephard’s memories appear on the silver screen. Shepherd had shared his childhood recollections about growing up in Hammond, Ind., in book form and during radio broadcasts, and Clark heard him in the 1960s and was immediately convinced.

For several years Clark shopped the project for studio financing but received little interest in return. Not until he collected clout in the film industry was he able to develop the deal and release the picture in November 1983. It was distributed to 900 theatres, collected $4 million during the first two weekends and $19 million total, and then was pushed aside by blockbusters “Scarface” and “Christine.”

MGM Studios then sold 50 of its movies to Warner Bros. in 1986, and “A Christmas Story” was tossed in, and that’s when media mogul Ted Turner watched the film for the very first time. Two years later TNT opted to broadcast the film for 24 consecutive hours as a holiday-season stunt, and it worked.

Today, TBS does the same, and an estimated 40 million viewers have established it as a yuletide perennial. 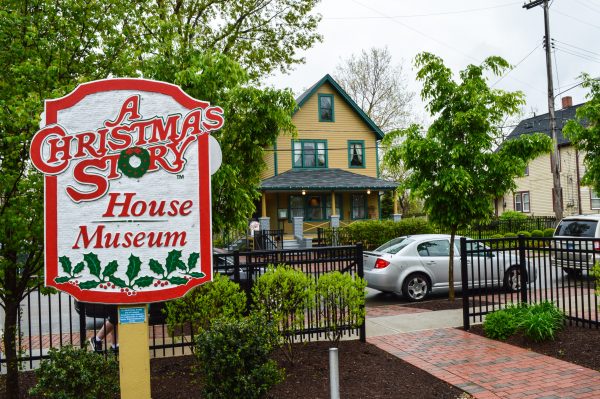 It is Christmas year-round on West 11th Street in the Tremont area.

The first step into the Parker house delivers the visitor to a time before World War II, when the living room radio was a family’s primary source of in-home entertainment.

The furniture in the living room and upstairs bedrooms is period correct, and the cupboard under the kitchen sink where Randy hid away when his father was coming home angry is large enough for most children and adults to try for themselves. The interior of the house, a tour guide will inform you, is interactive so visitors can feel free to pick up that bowling ball, the Lifebuoy bar of soap, Ralphie’s Radio Orphan Annie Speedomatic Decoder, and they can also caress that leg lamp just like Peter Billingley’s character did in the movie.

“Oh, look at that! Will you look at that? Isn’t that glorious? It’s… it’s… it’s indescribably beautiful! It reminds me of the Fourth of July!”

The guide also shares several other unknown tales about “A Christmas Story,” like that fact Clark’s original version was rated R, and the profanity was not muffled at all. In fact, the owner of the family-owned Higbee’s department store nearly reneged on the agreement that allowed for the nighttime filming because of the vulgar language.

“Now, I had heard that word at least ten times a day from my old man. He worked in profanity the way other artists might work in oils or clay. It was his true medium; a master. But, I chickened out and said the first name that came to mind.”

Also, Jack Nicholson, fresh off a successful portrayal of Jack Torrance in “The Shining,” was Clark’s first choice to play Ralphie’s father, Mr. Parker. However, Nicholson demanded $5 million, so instead Clerk opted for Darrin McGavin and compensated the actor $3 million. 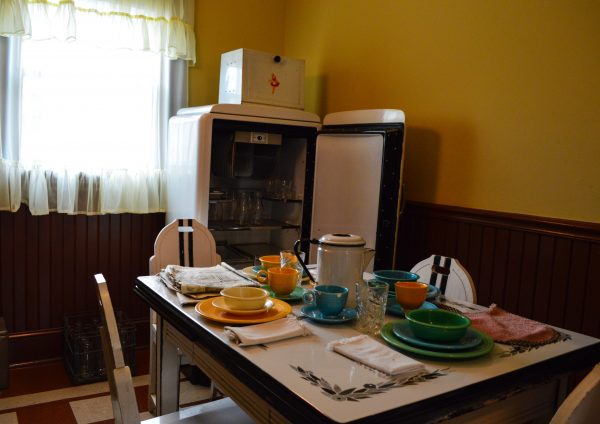 The furnishings of the Parker house are period correct from the late 1930s.

And little brother Randy was played by Ian Petrella, not because he was cute, but because Patrella had the best oink for the mashed potato scene in the Parker’s kitchen.

“Randy, how do the little piggies go?

The dwelling is smaller than it appears in the movie, and it is located in the middle of a normal neighborhood with garage sales signs plastering the utility poles and nice homes intermixed with dilapidated ones. The Parker house is, though, in close proximity to the busy streets connected to a city of 400,000 residents.

“Most of the people who visit now are from outside the area,” the tour guide explained. “We do have some local people come through, too, but for the most part this is a pretty big tourist attraction for the Cleveland area.

“Brian Jones restored the house and bought the other properties because he’s always been a huge fan of the movie,” he continued. “He’s collected so much of the original things that I’m not sure what’s left other than the bunny suit. From what we know, that suit is still owned by Peter Billingley, and we’ve heard it’s now stored away in his mother’s attic because he grew tired of people wanting to see it for themselves. 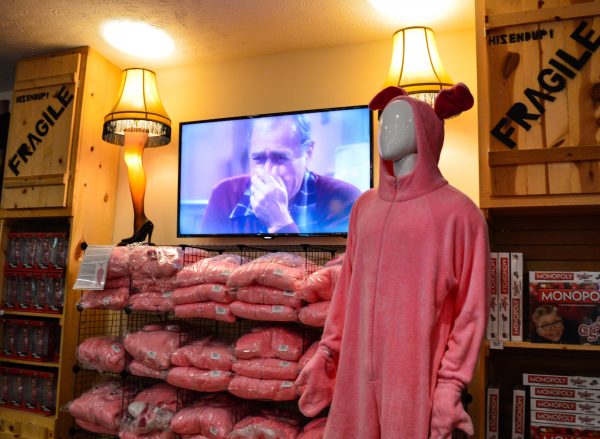 In every size possible, Aunt Clara’s gift to Ralphie is available for purchase inside the gift shop.

But that pink pair of pajamas is available in all thinkable sizes in the gift shop situated across the street from the Parker house, and each of them appears as authentic as the gift received by little Ralphie from his Aunt Clara.

“Aunt Clara had for years labored under the delusion that I was not only perpetually 4 years old, but also a girl.”

And yes, various versions of the “fra-GEE-lay” leg lamp are for sale, too, some of which come complete with the wooden box. Additional souvenirs include T-shirts and hoodies and key chains and shot glasses and even a leg lamp Halloween costume and leg lamp night lights. There also is a Monopoly version dedicated to “A Christmas Story,” as well as replicas of the prized Red Ryder BB Gun. 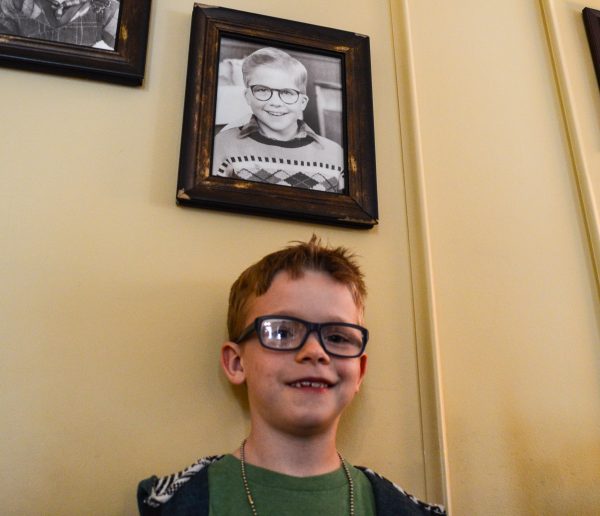 Some of the children visiting the Parker house resemble the cast members of the movie.

The shelves and retail racks in one section of the store offer items connected to a few other Christmas-themed movies like “National Lampoon’s Christmas Vacation” and “Elf.” Moose glasses, Blackhawks jerseys, T-shirts, tumblers, cooler koozies, stockings, and pint-sized glasses all are available to customers.

Not too shabby for a film that was poorly reviewed by movie critics from the New York Daily News, the New York Times, and by Rex Reed in the New York Post; Siskel & Ebbert even offered “A Christmas Story” two thumbs down.

“And when they come up with more things, I am sure our visitors will be able to find them here,” the tour guide explained. “People come here because they have loved the film for so many years, and that’s why they usually walk out of here with something, anything, that gives them that connection to take home.

“It’s all available online, but I believe most people wait to buy what they want until they are actually here,” he continued. “That’s the impression I get anyway.” 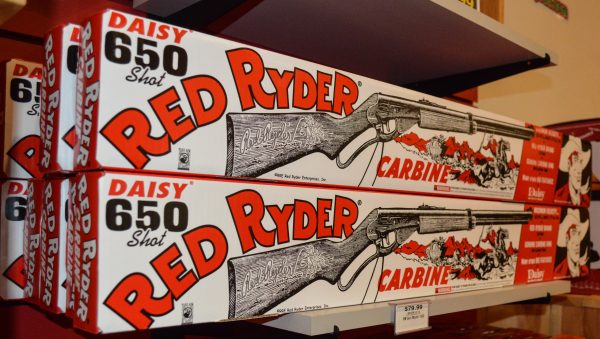 Replicas of the “holy grail” are available for just under $80.

The holy grail is there, encased, of course, but its compass and sundial are visible and there exists no chance anyone will shoot their eye out.

“Oh no! It was a classic, mother BB-gun block. “You’ll shoot your eye out!” That deadly phrase honored many times by hundreds of mothers was not surmountable by any means known to Kid-dom, but such as my mania, my desire for a Red Ryder carbine, that I immediately began to rebuild the dike.”

It was purchased by Jones at auction for $10,000 less than two years ago and was sold by Gary Meck, the man in charge of props for the movie.

“Next to me in the blackness lay my oiled blue steel beauty. The greatest Christmas gift I had ever received, or would ever receive. Gradually, I drifted off to sleep, pranging ducks on the wing and getting off spectacular hip shots.” 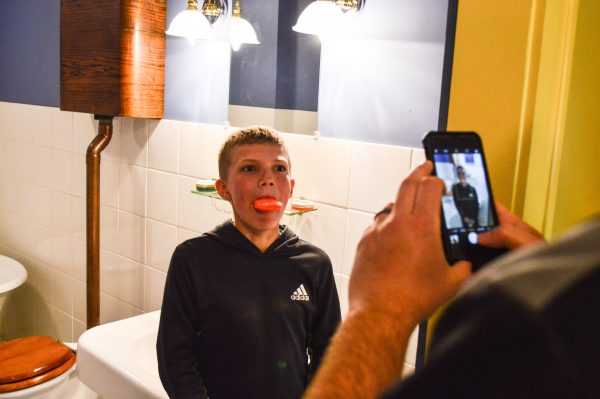 A father triple-dog dared his son to place the Lifebuoy Soap bar in mouth like Ralphie had to do in the film.

Red Ryder and Orphan Annie comic books, Ralphie’s suit and pajamas, the real decoder ring, the mother’s apron, the father’s house sweater, and even Randy’s legendary snow suit all are inside, too, the same one that actually was filled with couch cushions so the young boy could not get his arms by his side.

What was nowhere in sight, though, was that flag pole Flick licked during recess that one school day.

Are you kidding? Stick my tongue to that stupid pole? That’s dumb!

That’s ’cause you know it’ll stick!

You’re full of it!

NOW it was serious. A double-dog-dare. What else was there but a “triple dare you”? And then, the coup de grace of all dares, the sinister triple-dog-dare.

Schwartz created a slight breach of etiquette by skipping the triple dare and going right for the throat!” 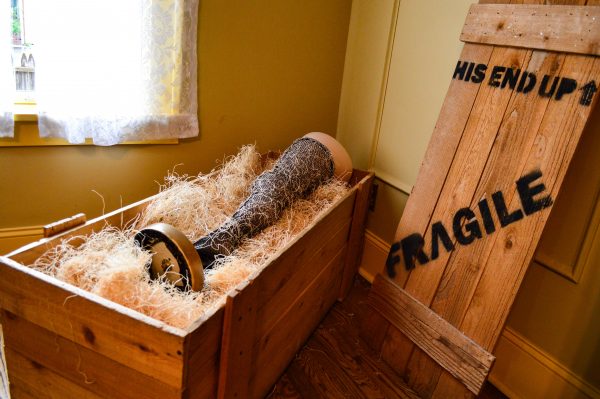 This “major award” is located in one coprner of the Parker House near Cleveland.

“Even though it looks like nothing more than a rusty old flagpole in the movie,” the tour guide reported, “it was actually made of PVC piping so his tongue wouldn’t really stick to it. Even though this area didn’t really get a lot of snow that winter and a lot of money was spent on fake snow for the film, it was really, really cold that winter, and the boy’s tongue would have definitely stuck to a real flagpole.

“And we did have a flagpole here that resembled the one in the movie, but not long ago a wind storm took it down,” he said. “I know the plan is to replace it because a lot of people do ask about it.”

The “A Christmas Story” House and Museum  is open every day of the year from 10 a.m. until 5 p.m. and Cleveland, of course, is only a few miles away, and the NFL Hall of Fame is Canton is along the way when traveling Interstate 77.