More than 30 football coaches from the Ohio Valley Athletic Association sat down with college recruiters Wednesday evening at Generations Restaurant and Pub in an effort to gain attention for their graduating student/athletes.

“About 40 years ago, coaches like George Strager (St. Clairsville) and Bud Billiard (Brooke High) started holding these evenings, and they wondered then if the younger coaches like I was at the time would have enough initiative to keep it going,” Young said. “It was important to them, and it’s important to us, and that’s why we continue making these efforts.

“We hold one evening for our graduating seniors who haven’t been on the recruiting radar, and then in either late April or early May, we hold another forum for our student/athletes who will be juniors and seniors next year.”

“We never know how many coaches we will have at the event, but there have always been between 25 to 30 schools represented by assistant coaches or the head coach,” Young explained. “And we focus on the smaller colleges and universities because any student/athletes who could possibly play on the Division I level are already on that recruiting radar.

“But there are a lot of players in the OVAC that deserve a chance to continue their playing career while getting that all-important college education. That’s what this is all about,” he continued. “They may not be the young men who are big enough or strong enough to play Division I, but they are the players who have great work ethics and the heart to continue playing on the next level.”

Young’s 2014 Maroon Knights finished with an uncharacteristic 4-6 record, and his roster included only three senior-year participants. While those student/athletes have not communicated to him a wish to continue their gridiron careers, Young’s team did compete against several opponents who may have a chance.

“After this evening’s event, as many as 50 local high school football players will be contacted by at least one of the schools recruiting, and that’s because it’s all about the ‘package,’” Young explained. “That ‘package’ includes athletic and academic achievements, and if a young man fits the needs of one of these college programs, then it could be a good fit for all involved.

“These events are about making connections, and it all starts with the conversations that are had between the high school coach and the college coach,” he said. “Most of these colleges and universities do not have big scholarship budgets, but they have some, and that always helps the student/athlete and their families because that bill for higher education just keeps getting higher and higher.”

Once the student/athletes are contacted by a college or university, the process begins. The participating high school coaches provide statistical information pertaining to their athletic performance, and they also have the opportunity to “tell a kid’s story,” Young said.

“All of us coaches may battle on Fridays and Saturdays during the season, but there’s a lot of mutual respect among us,” he said. “And when it comes down to it, we do what we do for these students. Our job doesn’t end when that last game on the schedule is over.

“Once these student/athletes get contacted, they will have the opportunity to make campus visits, to review the different fields of study, and to get a taste of the college or university atmosphere,” Young added. “Our goal is to get these young men on the radar so they can gain access to whatever may be possible for them.” 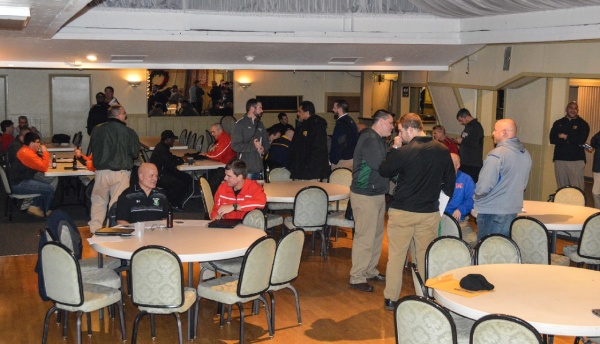 The banquet room at Generations Restaurant and Pub in Wheeling was crowded with football coaches Wednesday evening. More than 30 coaches from the Ohio Valley Athletic Association met with two dozen NCAA Division I and II coaches in an effort to acquire opportunities for scholastic student/athletes.  Photo by Steve Novotney.