The longest running variety show of its kind in the Ohio Valley, The Linsly Extravaganza has become an annual tradition for generations of Linsly alumni, many of whom have children or grandchildren who will perform in their footsteps on the stage Friday night.

Showcasing the talent of the Linsly student body, the Extravaganza will delight audience members with an eclectic range of acts including singing, dancing, instrumental performances, comedy and a few surprises along the way!

According to Frank Wilson, Head of the Fine Arts Department at Linsly and Director of the Extravaganza, the students and faculty put in a great deal of time and effort to make this show better and better year after year.

“Every evening, when I watch the students rehearse their act, I am impressed with the amount of time and effort put forth by all of them,” said Wilson. “These students, and all of those that have performed before them in the previous seventy-eight Extravaganzas, have set a high standard for all those who will follow. I am extremely proud of each and every one of them!”

One of the most unique features of the Linsly Extravaganza is that every member of the Linsly student body and faculty is involved to make this show a success. From Linsly’s youngest fifth graders, who will make their Extravaganza debut next Friday night, to the Senior Class of 2017, who will be taking their last bow on stage, the students and faculty work together to make this performance outstanding every year.

Co Director, Mrs. Kelly Soloninka and show choreographer Mrs. Greta Foose, begin working with Wilson on every detail of the show, including choreographing the acts, costumes, and music, very early in the year.

Foose explained that the opening act of the Extravaganza, commonly known as “The Opener” is one of the most exciting acts to choreograph as it really sets the tone for the entire show and features some of Linsly’s most talented dance students.

“I can’t give too many details away about this year’s Opener because we always like it to be a surprise, but I will say that this year it is really going to wow the audience,” said Foose.

In addition to the opening act, the audience will also enjoy a variety of performances including fun novelty acts, talented Linsly student solo vocalists, the Linsly chorus, and instrumentals from Linsly’s String Orchestra. 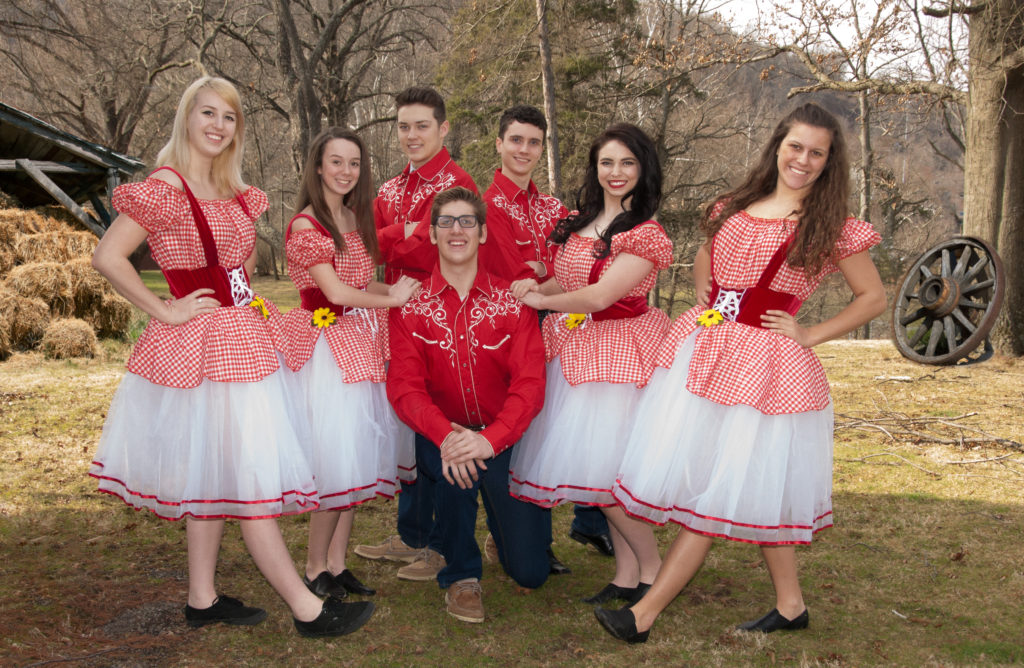 The Extravaganza opening act is one of the most anticipated performances of the evening that kicks off the show every year! Pictured are students dancing in this year’s “Hoedown” of an Opener (left to right Mariah Nickoles, Caitlin Mead, Jonathan Milton, Christopher Nau, Amelia Jones, Carleigh West and kneeling in front, Chaz Ghaphery.

Soloninka, explained that the Extravaganza has become a part of the tradition and culture that makes Linsly such a special place.

“The tradition that started 79 years ago that has become the Linsly Extravaganza has truly become an integral part of the Linsly experience,” said Soloninka. “ The Extravaganza showcases the amazing talent of our student body and allows them to explore their interests in the performing arts, but it also is so much more than that! To perform in the Linsly Extravaganza is to be part of our school’s rich history. It is a thread that connects generations of alumni who fondly reminisce about their acts on stage during reunion weekends. It is spectacular that our own Linsly students in 2017 are dancing and singing on the same stage in the same show that their alumni grandparents and great grandparents did 79 years go. Now that is something special.”

For more information about the Linsly Extravaganza or to purchase tickets for the show, contact the school at 304-233-3260.