There are a lot of numbers to consider here. 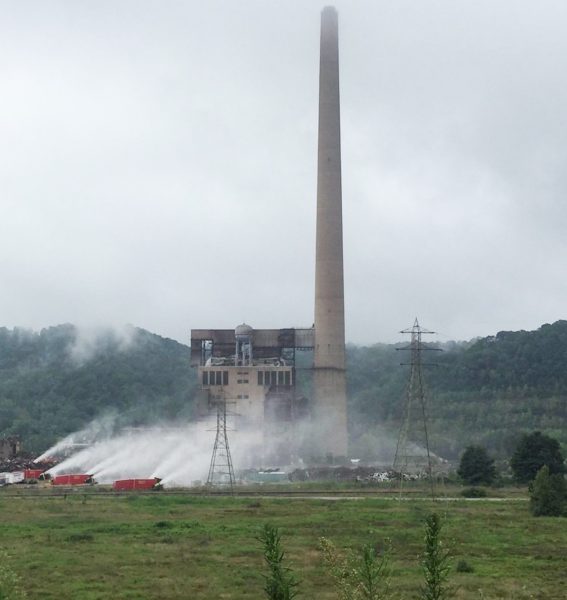 Demo crews and local first responders watered down the area to prevent a large smoke cloud when the stack was taken down nearly a year ago.

It’s a Big Deal because IT’S A BIG DEAL

Ohio Gov. John Kasich already has exclaimed that if this proposed project becomes a reality, it will represent the biggest economic investment within the borders of Ohio.

“Ever since the gas and oil companies began the drilling here in the Valley, I’ve been trying to follow the shale industry as closely as I can, and I’ve read recently that the Upper Ohio Valley is now second as far as the development in the industry,” Belmont County Commissioner Mark Thomas reported. “The top area, of course, is the Gulf Coast, where crackers have been in operation for a lot of years, but now this area is right behind them.

“That means a lot even though this region of the country only has one cracker under construction right now,” he said. “Maybe it’s just me, but that’s how I feel about it right now, and seeing the power plant’s smoke stack come down was the first sign for me that PTT Global was very serious and that this project was moving in a very positive direction for the people of the Upper Ohio Valley. That showed me that the company is very serious about this being their site for this plant because they are not looking at any other site. This is the site.”

According to the Petrochemical Update, currently there are seven new cracker plants under construction along the Gulf Coast, five of which are expected to be operational by the end of this year. Ten more, the website indicates, have been proposed in that area as well as in the Ohio Valley.

“When that construction takes place,” the commissioner added, “it will change this Valley in a lot of different ways, and mostly for the positive.”

PTT Global is not the first petrochemical company that has examined the Dilles Bottom location. In 2011, Royal Dutch Shell announced its search for property in this region, and company officials confirmed that Belmont County was an option. Three hundred acres in Beaver County in western Pennsylvania, where a zinc smelter operated for decades, was chosen, however, and the multi-billion cracker is expected to employ at least 600 when completed, according to the Pittsburgh Post-Gazette.

“We did have Royal Dutch Shell look at this site before they made the decision to construct their cracker plant up in Monaco, Pa. They looked at this site in Belmont County for a couple of years, but they opted for a different location,” Thomas said. “I know a lot of people in the county who were involved in those talks thought we would get that project, but we obviously didn’t.

“But one of the best things that happened for the PTT Global project is the fact that Royal Dutch Shell decided on the land that’s less than 80 miles away from Dilles Bottom. That was a big sign that this area is going to be a force in the shale industry in the future,” he said. “We may be an inland location, but the fact remains that the majority of the people in this country live within 400 miles of this Valley. That’s where the demand is, and where the demand will be even greater in the future of the country makes this transition away from coal-powered power to natural gas power. It’s already happening.” 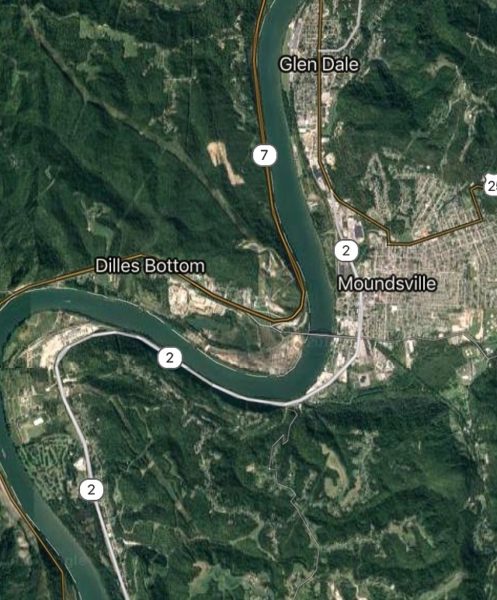 This image from Google Maps displays how close the Dilles Bottom area is to the city of Moundsville.

Very soon after he was sworn as mayor of Wheeling, Glenn Elliott created three ad-hoc committees comprised of volunteer residents to examined critical aspects involved with the future development of the Friendly City. While two of the committees reported on retention and housing, the third worked to identify what city government could do to attract new companies to the downtown.

Once a thriving area for business, downtown Wheeling declined when the retail industry shifted its business model to malls and plazas situated along highways and interstates. That movement, along with the death of steel, has left Main and Market streets with several large, vacant structures, including the 12-story Schmulbach Building, the former headquarters of Wheeling-Pittsburgh Steel.

“I commend Regional Industrial Development Committee chairman Pete Holloway and his fellow committee members for their exhaustive analysis of the impact that the proposed Belmont County cracker plant could have on the city of Wheeling,” said Mayor Elliott. “Their report highlights three areas of particular need that I think are spot-on: (1) A more aggressive collaboration with other regional jurisdictions (both in West Virginia and Ohio) to identify mutual interests; (2) an emphasis on workforce training; and (3) attention to aging city infrastructure.

“Deeper in the report are specific needs with respect to our education systems, our healthcare systems, and our housing markets,” he continued. “Could there be other needs not considered by the report? Absolutely, but I think Mr. Holloway’s committee has given us a realistic approximation of what we can expect.”

It is common, according to experts on the shale industry, that ancillary businesses develop near cracker plants to take advantage of proximity, but Wheeling’s mayor does not expect that to take place within the city limits just as it did not when the steel industry was thriving on the banks of the Ohio River. Instead, downtown Wheeling was a densely populated business district, and it could be once again.

“While it is difficult to project the overall regional economic impact of a cracker plant, there is no doubt that this facility would be a tremendous shot in the arm to our regional economy,” Elliott said. “While the city of Wheeling does not possess a surplus of flat, developable properties suitable for the offshoot industries that tend to cluster around crackers, we have a surplus of office space in our downtown business district suitable for the corporate headquarters associated with all this regional activity.

“Indeed, no other city in the immediate surrounding region is positioned as well as we are to become the corporate headquarters for the cracker-based economy, particularly when you consider the impressive collection of banks, law firms, accounting firms, and financial firms in and around our downtown,” he said. 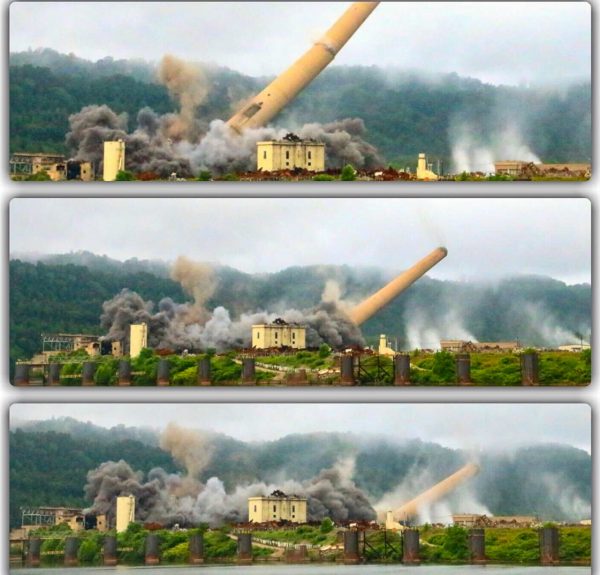 The 306-foot stack at the former Burger Power Plant came crashing down with large crowds gathered on both side of the Ohio River.

The Next Step? Yes or No

PTT Global has spent more than $100 million with a pair of design and engineering firms, and after receiving those reports earlier this year, the corporation announced a delay with its final decision. Initially, Thailand officials estimated it would know one way or the other by the end of the first quarter of 2017.

Now, Thomas hopes PTT will move forward by the end of the year.

“I know a lot of people quit believing it was possible when the delay was announced, and I expect that because we have a bad habit around here of being negative,” the Belmont County commissioner said. “Maybe now more people think it’s going to happen since the company has purchased the First Energy property. Sure, it’s a multi-billion-dollar project, but $14 million is nothing to sneeze at.

“It was a very positive announcement, for sure, but this purchase does not represent a final decision on the part of PTT Global, and they issued a statement to that effect so everyone does understand where this project is at this time,” Thomas continued. “But, with that said, I like what I see. The purchase of this property, in my opinion, was a big hurdle because that site sat vacant with a decommissioned power plant on it for many years. To see it clear for something new is a big positive for the local economy.”

The 170 acres sold to PTT Global represent about one-third of the land needed to construct the planned plant, and the company does possess options to purchase an additional 300-plus acres from two private owners. Also included are at least 33 residential parcels, Thomas explained, and he expects PTT to offer at least market value for those properties.

“The land that is used now for those homes is in the plan area for this cracker plant, but it’s also possible that if they are unable to reach agreements with those property owners, then it is a possibility that PTT will choose to simply build around those homes,” he said. “I’m torn there as a county commissioner because I understand that some people may not want to leave the only home they’ve ever known.

“But I am confident that the company will at least pay those property owners at least fair market value if not more, so I hope that’s the way it works out,” Thomas added. “I know I would not want to live next to this giant plant, but that hopefully will be their decision in the future.”

Thomas and his commission colleagues J.P Dutton and Josh Meyer are planning a trip to the Monaca with the members of the county’s Port Authority so the group can see for itself what preparation may be needed in Dilles Bottom, an area included in the Shadyside School District. But while the commissioners, labor leaders, and the school superintendent have attended many meetings the past two-plus years, it has been officials of the state of Ohio leading the negotiations with PTT officials.

“Jobs Ohio is the primary economic development engine of the Kasich Administration, and it used to be the old Ohio Department of Development,” explained Thomas. “The folks with Jobs Ohio are the ones that are doing a fabulous job driving this project for East Ohio. If PTT Global’s decision is to build in Dilles Bottom, it will be the biggest economic development project in the history of the state.

“The county has had a seat at the table from the beginning, and so have the administrators from the Shadyside School District to make sure the kids in that district will be taken care of,” he said. “The school district will be taken care of no matter what incentives are in place in the end. That’s the way this system works. States battle states and counties battle counties, especially when it comes to a project of this magnitude. It’s the reality of economic development.”