(Editor’s Note: This is the first article in a series detailing the redevelopment of two vacant properties on Market Street in downtown Wheeling.)

Vince DeCrease wants to document his experiences as he and his two partners work toward bringing back to life two – possibly three – storefronts on the northern end of Market Street in downtown Wheeling.

DeCrease is one of three partners of D.C. Ventures, and the company owns two buildings that once housed the Dinner Bell and Industronics. This stretch of structures, situated directly across the street from Market Plaza, was once home to Becker’s Hardware and Kelly-Mike’s Sporting Goods, and current businesses include Ed Streski’s Advanced Lock and Security, and Aaron Badia’s restaurant/nightclub Another World.

DeCrease, along with his architect Wendy Scatterday, wishes to chronicle the steps that must be taken to satisfy all federal safety and building codes, so they have agreed to participate in a few timely installments between now and when the two properties are once again walkable destinations in downtown Wheeling.

Readers of Weelunk have met DeCrease and Scatterday with articles published in the past few months. In case you missed them, you can access them with the links below. 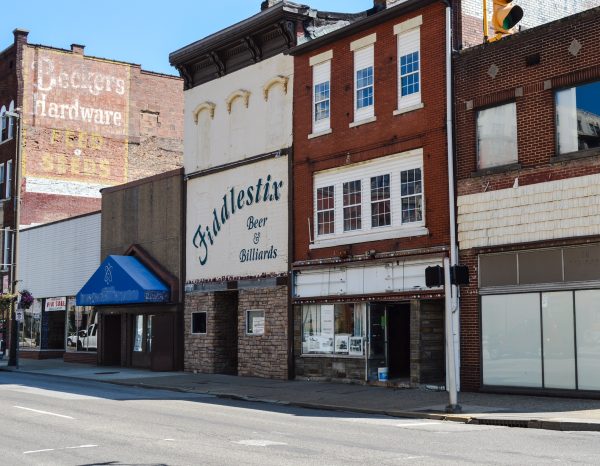 Thus far D.C. Ventures owns the former Industronics and the former Dinner Bell. The partnership is attempting to purchase the Fiddlestick’s structure for a reasonable price.

STEP ONE – The Vision

DeCrease and his partners know what they wish to accomplish. They want to take advantage of the fact that opportunity in Wheeling is bountiful at this time. That’s why D.C. Ventures also owns nearly five acres of land at the bottom of Rock Point Road in East Wheeling.

A transition is taking place, albeit gradually, and properties in the downtown and throughout the Friendly City are being purchased daily with the transactions being orchestrated by those with a vision for residential housing, new office space, unique restaurants, and retail shops. No one believes downtown Wheeling will ever return to what many memories contain, and that includes DeCrease.

“What I have always envisioned in these storefronts are small shops and restaurants,” he said. “I think if you keep it small, the crowd that is moving into downtown Wheeling will like that. I know young adults between the ages of 25 and 40 really flock to those kinds of developments.

“And hey, I’m 56, and I like those kinds of places, too,” DeCrease continued. “It’s all about that atmosphere, and what I would like to see is something similar to what I’ve visited when traveling to see my daughter. My son is 32, and my daughter is 31 years old, and what I see here is exactly where we go.” 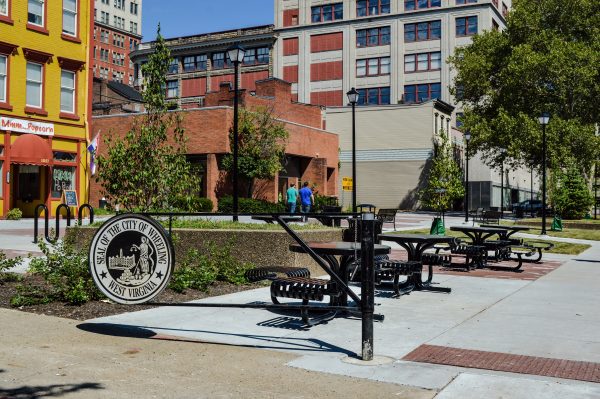 The renovated Market Plaza, situated across Market Street, already has proven to be a nice amenity for downtown workers.

There are a plethora of “For Sale” signs bolted to buildings in downtown Wheeling at this time, and developers, according to Vice Mayor Gene Fahey, have been poking around town for several months.

Wheeling Mayor Andy McKenzie said Monday, “There are a few big announcements that everyone will be hearing about in the very near future, and I think everyone will be surprised and happy about what they hear.”

It’s opportunity DeCrease is seeking to take advantage of, and he believes the time is now. He wishes the partnership could purchase the property situated between the two storefronts, but they also refuse to pay much beyond true market value.

“I have seen things change in Wheeling during the last few years, and today there’s a lot more traffic and a lot more people walking throughout the downtown,” he said. “Plus there are going to be a lot of residential opportunities in the future because this is where people want to live now.

“I believe in three to five years this downtown will be transformed into something like we have seen in other cities and something that the people of Wheeling have been envisioning for many years,” he said. “It’s something my partners and have been discussing for more than 10 years, and now seems to be the right time to move on it.” 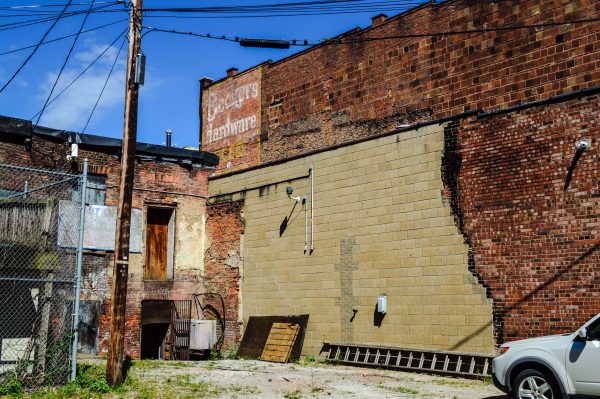 The D.C. Ventures development is taking place near the former location of Becker’s Hardware.

STEP TWO – The Initial Investment and the Return

D.C. Ventures purchased the two properties for less than $100,000, and that’s because the conditions of the parcels were not pretty. Crews, in fact, worked for more than a month to clear nearly everything found inside following the real estate closings.

“We bought the first two buildings from individuals that had no plans to do anything with them,” DeCrease said. “Since then we have spent a few thousand dollars just to clean them up, and that’s made a huge difference with the interiors.”

To house the brand of tenants D.C. Ventures is most interested in means the strict regulations and codes that often halt thoughts of “old building” redevelopment must be followed. The business plan calls for a total investment of approximately $150,000 ready the spaces for the new tenants. The final build-outs for the tenants will add to that amount, but DeCrease does not have a solid figure on that project at this time.

Scatterday has been retained by D.C. Ventures, and she explained there’s much involved in complying with the federal building and safety codes.

“Several advantages have presented themselves when it’s come to the two buildings that D.C. Ventures owns at this time, and one of them is that they are well-built buildings. They have good bones,” she said. “The foundations are intact, so in terms of a starting point we’re in pretty good shape. 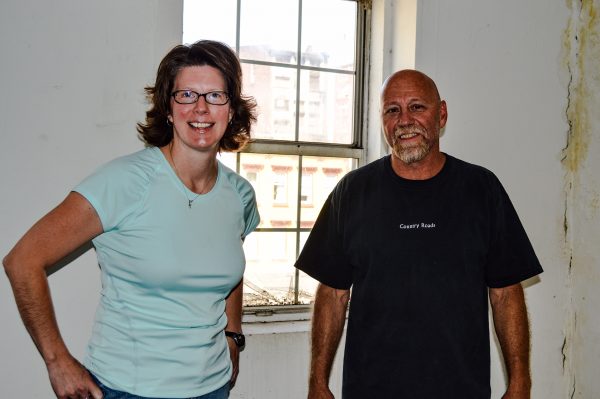 DeCrease and his partners have selected Wheeling architect Wendy Scatterday for the interior designs.

“The fact that there are mason walls between the buildings gets you a fire rating that is much higher than what a regular wood frame building would receive. So I believe that puts us ahead of the game,” she continued. “Another factor that is working in our favor is the fact that the floor plans are about 1,200 square feet and everything that we are working with as far as the adaptations and modifications that will need to be made to bring the buildings up to code are less difficult because it’s about smaller spaces instead of large ones.”

Scatterday said the smaller areas are friendlier especially to the fire safety codes that are enforced by officials of the Wheeling Fire Department. Surveying has taken place within the two structures in order to establish the square footage, and fire department officials have already visited the properties.

“The technical phrase is ‘the authority having jurisdiction,’ and what that means is that the fire department administers what needs enforced, and the building inspectors for the city of Wheeling handle the building regulations,” she said. “We walked through the folks from the fire department because we need them to interpret what our conditions are here.

“Their interpretation of what applies to these two structures is really critical, and it’s really a negotiation because it’s a give and take,” she said. “The process usually takes a couple of weeks, and those folks are always great to work with. It has everything to do with liability and safety for the people inside and for the firefighters who have to go into structures in the case there’s a fire or something else inside.”

The monthly rent rate, DeCrease confirmed, for street-level businesses will be between $800-$1,000. The current plan involves developing five apartments, and the expected monthly rent should be around $650. 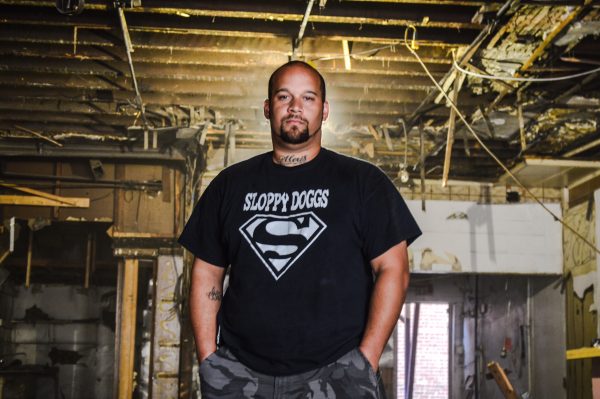 Christopher Burress, owner of Tito’s Sloppy Doggs in downtown and in the Elm Grove section of Wheeling, plans to consolidate his locations inside the former Dinner Bell.

And DeCrease uses the term broadly. To be more specific, DeCrease wishes for D.C. Ventures to be a part of the renaissance he insists is taking place right now. He’s meeting with prospects, loves the ideas people have for the area, and is confident to the core.

“As of right now I have two potential tenants, and the way it looks right now those two tenants will take the street-level storefronts, and then we’ll have the apartments above those businesses,” DeCrease explained. “And we’re also in the process of negotiating to purchase the building that sits in the middle of our two properties.

“If that happens we’ll have three storefronts, so one tenant would fill two of them, and the other tenant will fill the third one,” he said. “Hopefully within a couple of weeks we’ll be able to say that we have all three buildings under our ownership.”

DeCrease has met with a plethora of potential tenants for the past several months with the intention of being very selective.

“We’re not going to let this area become another late-night bar strip. We want specialty shops and specialty restaurants,” he said. “So we have been pretty picky because we know what we want this area to become.

“The partners with D.C. Ventures all have kids, and we’re hoping that if we do this and others do this, someday maybe we’ll all have our kids back in Wheeling,” he said. “We all grew up here, and we’re happy here. It’s a great place to raise your children, and the cost of living is very reasonable.” 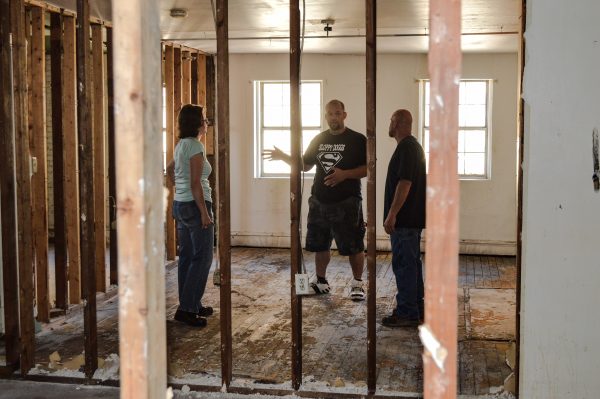 Scatterday, Burress, and DeCrease discuss the plans for the apartments above each of the storefronts.

Christopher Burress, owner of Tito’s Sloppy Doggs in downtown Wheeling and on National Road in Elm Grove, is one of the two tenants with whom DeCrease has negotiated. Sloppy Dogs will move into the location that once housed the Dinner Bell Restaurant.

“The foot traffic is way better in downtown than it is in Elm Grove; I can tell you that,” Burress reported. “The foot traffic is the main reason why we rented the little takeout shop in downtown. The only kind of traffic we have in Elm Grove are the cars driving by, and that’s why I plan to consolidate the two locations we have now to this one here on Market Street.

“And I’m excited for the new location because I used to go there all of the time with my father, and I do love that diner feel,” he continued. “I like the doing the cooking in front of everyone because I also talk to everyone who comes in. I don’t want to be stuck in a kitchen somewhere.

“Another thing I love about that is that people can see everything that I am doing while preparing their food. That way, they’re not going to have to worry about anything like that.”

DeCrease said the second tenant will be announced soon, and he is confident the additions to the downtown business landscape will remain true to that original vision. He is also hopeful that other investors with similar objectives will join D.C. Ventures in creating a new downtown Wheeling.

“As long as you surround yourself with the right people, it’s a very doable thing to do here in the downtown,” he said. “We didn’t just jump into this. We put a lot of thought into it, and I would suggest others who are interested do the same.

“And that’s why I want to document the processes we’re going through,” DeCrease added. “If someone else can follow along with this redevelopment, it might convince them to get into it to take advantage of the opportunities that are in downtown Wheeling right now.”

Future installments of this series focusing on the redevelopment of the older buildings available in Wheeling’s downtown district will continue documenting the necessary steps and decisions that the D.C. Ventures partnership will face with their properties. If you wish to inquire about the properties, please contact DeCrease at 304-281-9399, or email him at vdecrease@gmail.com.