Second chances in life are all too rare. How often is a person given the chance to revisit a certain period of their life and try again? What could be done differently? How could the experience be improved upon? What would remain the same?

The same questions could be asked of some old buildings that have seen better days. How could they be rebuilt? And what would you never change for anything?

Both these subjects will be on people’s minds on Saturday, May 5, at River City in downtown Wheeling at 7 p.m. when the Wheeling Young Preservationists host the second annual Adult Prom. The familiar gathering space will transform into a Prohibition Era speakeasy, complete with decorations, music, snacks, drinks, a photo booth and, of course, the traditional popularly elected Prom King and Queen.

“Everyone deserves the chance to dress up and go out for a night on the town,” Kellie White of the Wheeling Young Preservationists Board of Directors said. “We want to give the people of Wheeling that chance.” 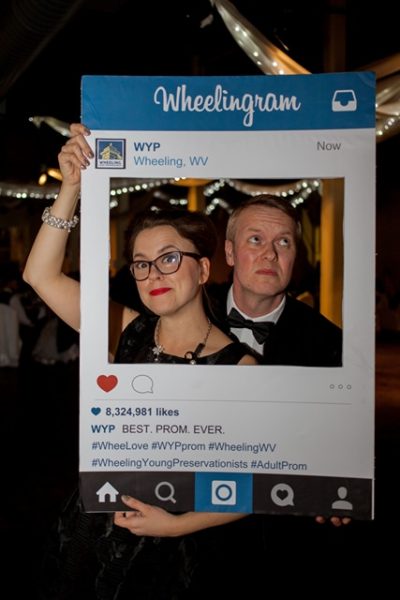 There is no such thing as a bad time for a photo opportunity at the Wheeling Young Preservationists’ Adult Prom.

On a mission … with cocktails in hand!

The Young Preservationists were founded over five years ago with the support of the Wheeling National Heritage Foundation with the mission of exploring preservation issues and techniques in a social context. They bring together people interested in preservation and tour historic locations, such as the Palace of Gold in Marshall County, or host expert speakers during special cocktail hours at local public houses such as Tacoholix or River City.

True to their mission, the Young Preservationists have already helped rejuvenate a few of Wheeling’s historic properties that were in dire need. In the fall, the group played an important part in a “Save Our Structures” event in North Wheeling co-sponsored by Friends of Wheeling and the Victorian Old Town Association.

The fundraising event was meant to raise funds to help renovate two pre-Civil War houses suffering from severe structural problems. During the event, the Young Preservationists served as house guides and helped place and remove signage. Ultimately the event was a resounding success, with their goal set at $3,000, and the final amount raised reaching more than $11,000.

“The houses have recently gotten new roofs and façade repair and will soon be offered for sale,” President of Friends of Wheeling Jeanne Finstein said. “Saving these structures will help maintain an unbroken streetscape in this historic neighborhood.” 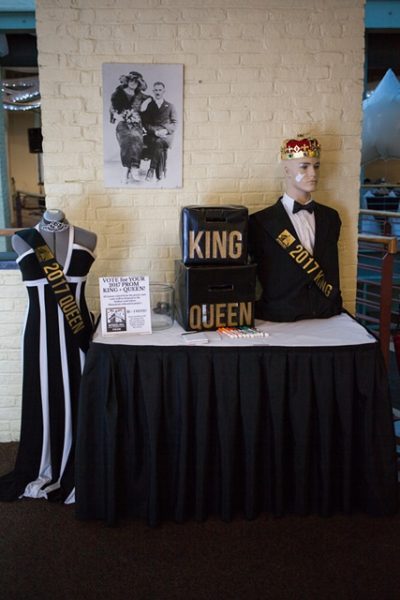 As tradition dictates, the election of Prom King and Queen is set up with all due pomp and circumstance at the Wheeling Young Preservationists’ Adult Prom in 2017.

When the music starts playing and the dancing begins on the evening of May 5, the Wheeling Young Preservationists hope to see plenty of new faces mixed in with the familiar.

“Our first Adult Prom was well planned and well attended,” White said. “We had 175 people in attendance, and everyone had a really great time. The photo booth and Prom Court were big hits last year. This year’s theme is going to be a lot of extra fun. Costumes are encouraged, but not required.”

Like last year, the Adult Prom is open to the adult public aged 21 and up. Tickets ordered in advance are $35 for singles and $65 for couples. Tickets include entry to prom, a snack buffet, two drink tickets (wine and beer) and one raffle ticket per person. Early registration ends Wednesday, May 2, but hope is not lost once it passes; tickets at the door will be $40 for singles and $75 for couples. Commemorative photos will be offered, compliments of JC Photography. There is a small cash fee to vote for the Prom Court … but past feedback indicates that it is entirely worth it.

Last year’s Adult Prom did lead to a few new members for the organization, and they hope that pattern continues this year.

All funds raised by the event will go toward the Young Preservationists’ continued efforts to educate members and the public of the importance of preservation. Locations being considered as study cases for preservation examples include Falling Water and the Palace of Gold. Admission and transportation to these locations are the types of expenses these funds would cover. More guest speakers and preservation workshops, such as historic window repair, are also on the agenda for the next year.

As an added bonus, a special pre-prom event will take place on Friday, May 4, at one of Wheeling’s own actual former speakeasies. This can be added to the prom registration for $5, and tickets are limited to 30. In true speakeasy fashion, all registered attendees will receive an email with the secret location and password. This event will feature light hors d’oeuvres and wine, as well as a historic building tour.

• Born and raised in the Ohio Valley, Daniel Dorsch brings a rich background of research and writing to Weelunk. He studied at West Virginia University and Duquesne University and has worked as a historian, a journalist, and a marketing communucations expert. Daniel’s personal philosophy is that every person and every place has a story to tell, and he makes it his mission as a wordsmith to help tell them. Daniel lives in Weirton with his wife and son.