If you’re from the Upper Ohio Valley, you may already be aware that the Wheeling Park Commission held summer dances for local teens during five decades of the 20th century — from the 1950s to the 1990s. The dances were held at Wheeling Park’s White Palace on Wednesday evenings for most of each summer. During earlier decades, the music featured both live performances and vinyl records spun by disc jockeys. In later years, rather than hosting live acts, the dances offered almost exclusively prerecorded tunes.

While the summertime dances have always been hosted at the White Palace, at some point they were moved to the rink adjacent to the building. According to Tim Boudreau, local resident and dance attendee for the first half of the 1980s, “The first few years were in the rink, and then the last year, the White Palace had been renovated, so they moved back upstairs.”

Public dances for local teenagers weren’t only held during the summer, at least during the early 1980s. Boudreau mentioned that winter dances also were held in the park’s Stone Room above the swimming pool. He recalled that one winter, some were even held at WesBanco Arena (then the “Civic Center”) in downtown Wheeling.

Prior to the mid-1980s, the White Palace was an open-air building, basically with one large space per floor. This made hosting cold weather events, including the teen dances, a dicey proposition. Window apertures were open to the ground below, allowing for the quick chucking of contraband or one’s most recent meal, depending on the circumstances. After the window installation and internal remodeling, conditions were much more stable and all-season-friendly, but the first-floor space available for teen dance attendees was greatly reduced. The upper floor had been turned into an event ballroom, so it was not used for the routine dances; however, it did host area proms and other special dances.

My “era” for the dances was 1984 to 1989. I didn’t go very often, but when I did, it was with a few close friends. We girls spent hours preparing. We had to select just the right outfit — perhaps a button-down shirt with the sleeves pushed up, a denim mini skirt, shiny flats and as many Swatches as we owned. Then we had to perfect our thick mascara and glossy lip color, shellac our bangs into tall architectural achieve 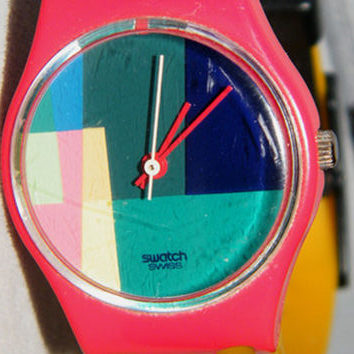 ments and scrunch L.A. Looks gel onto our permed curls.

In the ’80s, many times the dance DJs were on-air personalities from 100.5 WOMP-FM, the pop station of the decade. The song selection was always a mix of radio hits currently popular on WOMP. However, there were also a few notable, seemingly timeless standards that played at every single summer dance, school year dance, and prom I ever went to — “Shout” by The Isley Brothers, “The Twist” by Chubby Checker, “Rock Lobster” by the B-52s and “Mony, Mony,” the Billy Idol version.

What was it attendees liked best about the dances in those days? “Guys were always interested in meeting girls from other schools,” Boudreau said.

This feeling was reciprocated from the girls’ side, too. Back then, the only way you really got much contact with peers from other Wheeling-area schools was if they happened to be neighbors or relatives. If they lived across the river in Ohio, or in another West Virginia county, they might as well be in another nation. The dances offered a central place for regional teens to meet kids from outside their school circles. They also offered a simple way to reconnect with those kids you might have gone to grade school with, then lost track of once they transferred to local private schools, like Mount de Chantal, Linsly or Wheeling Central.

As with any public gatherings with nominal supervision — especially ones with teenagers — the events were not all rainbows and sunshine. Boudreau noted, “There was always a rivalry among the schools. Sometimes, it led to fights. And there was a LOT of drinking.” The West Virginia drinking age was 18 and 19 for the timeframe that Tim attended the dances, and ID enforcement was generally far more lax than it was in subsequent decades. Licenses were very easy to fake, as well. It was pretty easy for teens then to get alcohol in abundance. Drug use was also a reality.

I asked Tim what he might miss most about the dances. “It was a fun time when there wasn’t a lot to do in the valley. And Rax Roast Beef was always a blast after the dances! It was GREAT social interaction.  Kids are more into playing on their phones or videos games these days, and lack as much social interaction,” he said.

I was also curious about whether Boudreau might still be in touch with anyone that he first met at the dances. “There are a few. I even got a few dates out of the dances!”

Beginning in 2010, and for a few years thereafter, an organization called Park Dances Revisited held one “throwback” dance each summer as a fundraiser for local Ohio Valley charities. The events were immensely popular, and the organization was able to donate thousands of dollars to its beneficiaries. This year’s Teen Dance Revisited benefit dance is sure to be equally successful.

Just as the teen dances of years gone by allowed kids to revive contact with old friends who’d moved on to separate schools, this year’s dance offers adults another opportunity to meet up with long-lost acquaintances and friends, hang out at the White Palace again and enjoy music from the 1970s to 1990s. Break out the old dance moves or just sit back and watch everyone else do so. Even if you simply miss Rax, too, and would like to reminisce with like-minded people, head out to the park for this year’s revival event!

Teen Dance Revisited is set for 7-11 p.m. Friday, July 6, at Wheeling Park’s Memorial Ice Rink. Guests will take a step back in time and revisit the beloved Teen Dances of the 1970s, 1980s and 1990s. Johnny O from Kool 105.5 will be spinning hits from the decades. Guests must be 21+ to attend. The cost is $15 per person, and tickets are available at the Wheeling Park White Palace main office. For information, call 304-243-4185. Proceeds from the event will benefit the Oglebay Foundation’s Access to the Parks project. This project allows local underprivileged children to enjoy their favorite recreational activities at Oglebay and Wheeling Park.

• Katherine Marsh has lived most of her life in Wheeling, though she is not a current resident. From 2010 to 2012, she was the Park Dances Revisited organization’s writer, graphic artist and media liaison. She is a freelance writer, editor, artist and dabbler in a variety of other trades. Katherine graduated from West Virginia University with a bachelor’s degree in English and is pursuing postgraduate credentials from Oxford University. She is most happy when creating, visiting England or eating Elm Grove DiCarlo’s (Patsy’s) pizza.