She was 6 years old – nearly 7 – and she and her mother found themselves riding in an ambulance destined for Morgantown.

The child asked for a Pepsi, and she was promised one upon arrival. Debbie Green’s mother asked her daughter to sleep until they reached Ruby Memorial Hospital, but Debbie never awoke from that slumber.

“My sister passed away April 4, 1976, from leukemia, and I never really had the chance to get to know her,” explained Ron Green, the founder and director of the annual Debbie Green Memorial 5K Run/Walk for Leukemia. “I’ve always heard from family and friends about her life and how she got sick, and it just wasn’t a good time in our lives. Nothing good comes out of a child dying, and my parents went through a lot. 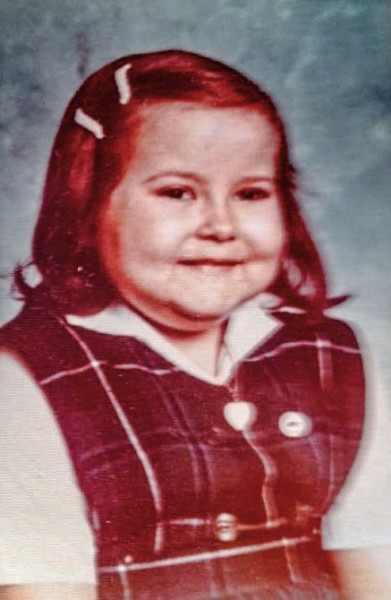 Debbie Green passed away at the age of 6 (almost 7) after battling leukemia.

“A lot of people helped my family out at that time, and the fire department in Benwood had Debbie Green Day for her. She passed away about six weeks after that benefit,” he continued. “There was a lot of sorrow, and I thought my sister’s life deserved more. I thought we could turn the sadness into something positive, and I believe we have accomplished that.”

Green admitted that 18 years ago he also founded the race as a way to pay back  the Upper Ohio Valley for what many folks did for his parents and brothers and sisters before and after the death of his sister. Each year since 1997 he has chosen a few families who have experienced what his parents did with Debbie’s illness, and some of the children have since survived while others have perished.

“I wanted to help others like so many people helped my family at that time,” Green said. “My sister’s life is meaningful. As beautiful as her life was for seven short years, I wanted to change things for the better.

“So far, in our first 17 years, we have raised about $1.5 million that has gone to 30 different children,” he said. “One big change for this year is that we have now decided to open it up to those suffering from all pediatric cancers. We are not running away from leukemia, but if someone comes to me and tells me that their child is suffering from a different kind of cancer, I still want to be able to help them.” 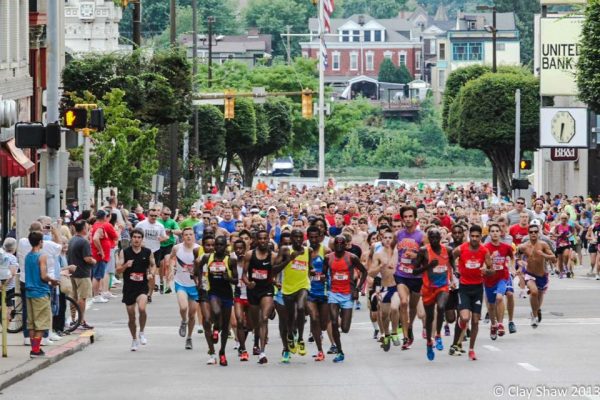 This year’s 5K race is set for Saturday evening on downtown Wheeling.

This evening the festivities will begin in downtown Wheeling with the Green Mile Run and Walk. Domino’s has donated the pizza, the band “Wild Horse” will provide the entertainment, and the registration fee now is $15. Registration will begin at 4 p.m. at Heritage Port.

The Green Mile has been dedicated to the memory of Michael Carroll, a young man who invented “Michael Meanies” before passing away in July 2014.

“We are ready to rock and roll,” said Green, a 16-year employee of the United States Postal Service. “Our phones have been ringing off the hook during this final week, so it appears as if we’re going to have another great crowd of people who want to help fight childhood cancers.

“Last year we did get hit with a lot of rain, and it broke my heart,” he said. “Showers are one thing, but when you get a storm like what we had last year, it really had a negative impact. The good news for this year is that we’re supposed to have great weather for both evenings.

“There is a different course for the Green Mile because we want to stay away from the construction near Wesbanco Arena. This year it will be the first mile of our 5K,” he continued. “On Saturday we will open up registration for the 5K beginning at 3 p.m., and there will be music played throughout the course. Debbie’s Dash will begin at 5 p.m., and then the Debbie Green 5K Run/Walk for Leukemia will start at 7 p.m.” 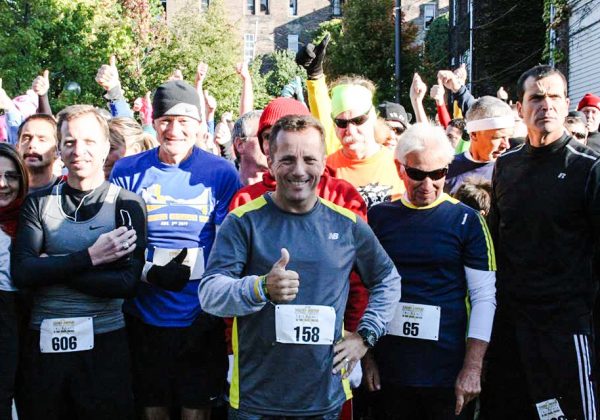 Green helped the Rotriga family with organization an October race that benefited the “Hopes for HInes” effort.

Saturday will feature Debbie’s Dash and the Debbie Green Memorial 5K Run/Walk. The Dash, a 100-yard dash for children 9 years old and under, will begin at 5 p.m., and the 5K, which is the official Road Runners Club of America West Virginia 5K Championship, is set for a 7 p.m. start. Each participant will receive a race t-shirt, free food and beverages, and a commemorative medallion. Green also has collected a plethora of door prizes, including a one-week vacation in Myrtle Beach, a weekend at Seven Springs, and several others. Undo’s has donated the pasta, Miklas Meat Market will provide cookies, and Jebbia’s Market has donated fruit.

Walk-up registration is welcome, and Green has delayed starting times in the past for those who have arrived close to race time.

“We will not turn anyone away for any of the events. We’ve even delayed the race before so we could get everyone registered so they could participate,” Green said. “That’s a good problem to have, and the way I see it is that we have until midnight to get it finished so the insurance policy is still good.

“Those kinds of details are part of putting on an event like this, and that’s OK with me. I’ll put up with it to be able to help the families that we have through the years,” he continued. “That’s what is most important to me and to all of the wonderful volunteers that help us every single year. It’s all about those children and their families.” 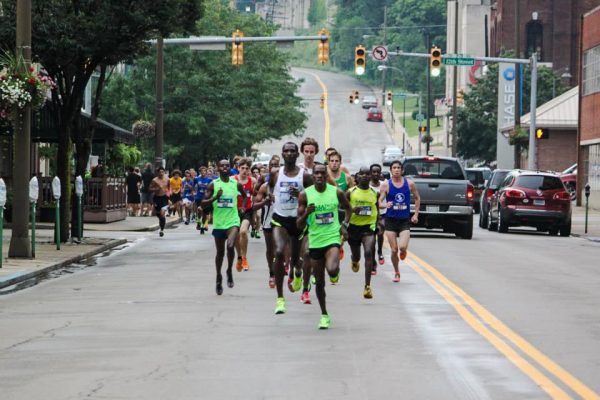 The Debbie Green Memorial 5K Run/Walk for Leukemia has attracted competitors from around the world.

He knocks on door after door, and he makes hundreds of phone calls. He works with officials of the city of Wheeling, and he takes an entire week of vacation before the event in order to be available for the media interviews and the last-day details. But to Ron Green, none of that proves as difficult as dealing with the reasons why he does what he does to make a difference.

“I didn’t go through anything back then because I was only 4 years old. But the rest of my family? They were all very aware of the battle my sister was fighting,” he said. “Putting this race on takes time, but you either make the time to make a positive difference, or you make excuses. I don’t make excuses.”

Parents with children who have been diagnosed with leukemia or any other pediatric cancer can contact Green to apply for the annual assistance by visiting www.debbiegreen5k.com. 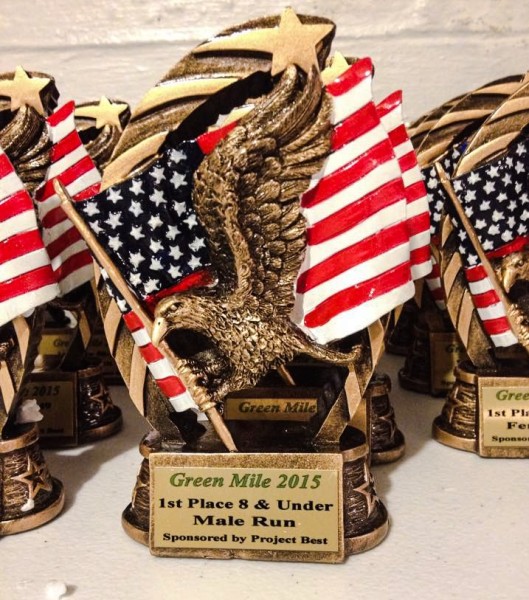 The trophies for this year’s Green Mile have a patriotic theme.

This year, three local children will receive funds from the Debbie Green Foundation, a non-profit 501-C-3. Those children are Cody St. John of Bellaire, Shawna Warner of Martins Ferry, and Jarrett Knox of Wintersville, Ohio.

“There is so much taken out of the wallets from the parents when their child is battling against leukemia or any other childhood cancer,” Green said. “So the funds that we provide often go toward the meals, the gas, and the utility bills, and things like that. That’s why it makes me very happy that gas is cheaper this summer than it has been in previous years.

“Any family with a child battling cancer can apply to us, and we do not ask about finances or anything about that because that’s none of my business. All I care about is that a child is sick, and I want to help them,” he said. “We usually receive three to six applications every year, so that should tell you how prevalent it is here in the Valley.” 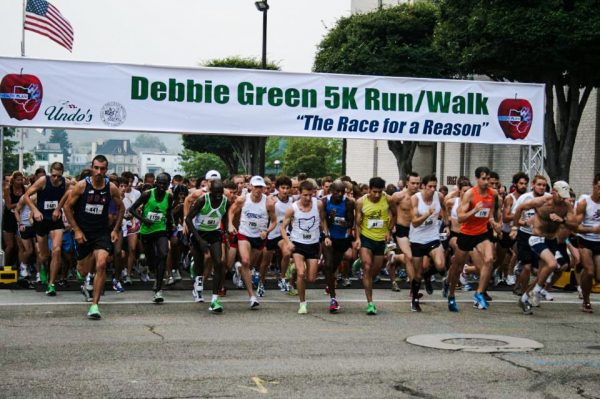 The start and finish lines are near the Harry Hamm Flagpole at Heritage Port.