A dog park in Wheeling will be a reality in 2016 thanks to the generosity of one Wheeling family that has stepped forward with a project-driving donation.

The Fitzsimmons Foundation has awarded the project $25,000 toward the facility’s construction, and in recognition of their generosity the park will be named the Fitzsimmons Family Dog Park, a PetSafe Park, and that name will grace the signage at the park’s entrance.

“Through the generosity of the Fitzsimmons family we are much closer to our financial goal,” reported Gregg Boury, Wheeling Dog Park Association Committee Chair. “We are thrilled to have their support and that a prominent, local family will be permanently associated with our dog park.”

“A dog park is an amenity that we usually see in larger cities than Wheeling, so for this city to be able to showcase it and add it to the quality of life here is really a great thing,” said Rocky Fitzsimmons, a board member and an attorney with the Fitzsimmons Law Firm. “Such an amenity can be used to attract and recruit new residents to this area of the state. 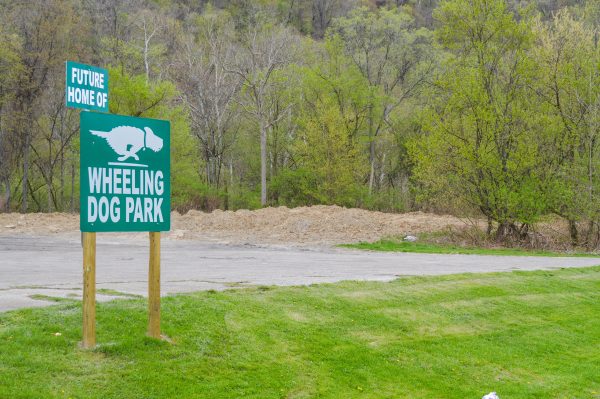 Landscaping must be performed and the installation of the fencing is expected to take place in early spring. (Photo by Steve Novotney)

“This is an opportunity to improve the quality of life for the citizens and their canine companions in our community. By supporting the dog park, we want to help the city continue to grow,” he continued. “I come from a family of animal lovers. In my immediate family, we all have dogs which we adopted from local shelters.”

The Fitzsimmons Foundation was established in 2007 as a conduit for the Fitzsimmons family to strengthen and enhance the community. The foundation has donated nearly $1 million to local organizations in the past eight years.

The Dog Park Association, Boury explained, has plans to open the park in the late spring or early summer of 2016 depending on what conditions this winter brings. The committee is currently working with city officials to finalize dog park rules, infrastructure, and a request for proposals for the remaining construction.

The region’s first dog park will be located at the Tunnel Green Recreation Complex, an established city recreational area that offers sites for recreational baseball and roller hockey. The dog park will be developed on the wooded lot south of the existing ball field and roller hockey rink and will become part of the City of Wheeling’s park system. The site has vehicular access from 18th Street and pedestrian access from the trail, along with adequate parking. 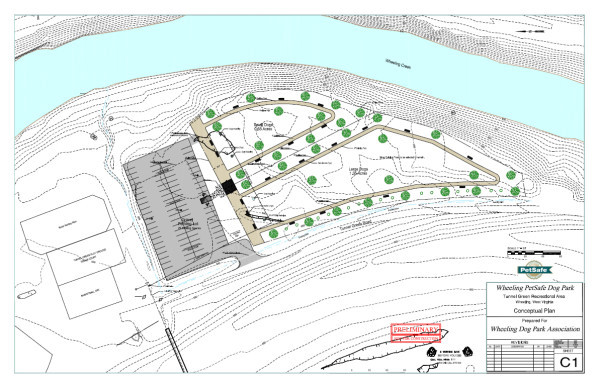 The design work that has been completed thus far was donated by local canine enthusiast – and engineer – Mike Kearns of Wheeling. The park’s location will be at the Tunnel Green facility in East Wheeling.

“This is a sign that Wheeling is finally getting with the times because there are several cities in West Virginia that already feature dog parks,” explained Boury. “As we move forward, the weather is going to have an impact as far as when the work can get started this spring, but this big shot in the arm from the Fitzsimmons family is really going to allow us to move forward very quickly once the weather warms up.

“Most recently the layout for the park was a stake-out for the fencing, and now the city will soon step in and run the water lines to the park so each area can have water reservoirs, and the construction process will be able to start very soon,” he said. “We are also hoping that we have a local resident step forward who can help us with the landscaping of the park, and of course we are continuing our efforts with fundraising because we really want to make this facility the best it can possibly be.”

Last spring the association kicked off its 2015 fundraising campaign. To date, the association has raised more than $60,000 in additional funds toward the park’s construction, including the $25,000 won during the PetSafe dog park contest, $10,000 from the Ohio County Commission, and several other grants and donations. Announcement of additional grants and foundation awards is forthcoming.

The Community Foundation of the Ohio Valley serves as a fiscal sponsor for the Wheeling Dog Park Association and is processing all donation requests.  Donors giving at various levels will be acknowledged on recognition panels at the dog park’s entrance or through brick pavers or benches depending on the amount given. 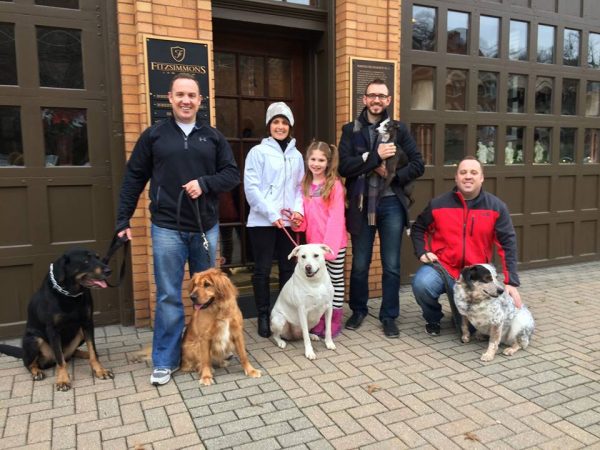 The Fitzsimmons Foundation has awarded the project $25,000 toward the facility’s construction and in recognition of their generosity, the park will be named the Fitzsimmons Family Dog Park, a PetSafe Park, and that name will grace the signage at the park’s entrance. From left are Clayton Fitzsimmons. his mother Sonny and daughter Bella, Derrick McKee, and Rocky Fitzsimmons.

Full development of the park includes excavation, fencing, landscaping, and amenities such as benches, signage, and waste and water stations.  Given the abundant size of the park, fencing accounts for 44 percent of overall costs.  The dog park will be divided into two sections, 1.35 acres for larger dogs (above 30 lbs.) section and .65 acres for small dogs (under 30 lbs.).  Each section will have a crushed stone walking trail and its own water and waste stations.  Local engineer Mike Kerns has donated time in drawing out the development plans.

“I want to thank Gregg and the members of the Dog Park Committee, and that includes Derrick McKee, and that’s because you all cannot be thanked enough for all of the hard work and the time that you have spent on this project,” Fitzsimmons said. “The dedication that so many local residents have had really allowed us to have a lot of confidence in this project.”