They wrote on-the-spot poems for $5 on really old typewriters right there in front of everyone. One of the composers was Bethany College’s Jessie Janeshek, and the other was Marc Harshman, the poet laureate of West Virginia.

Wheeling resident Wendy Scatterday was one of the many who challenged Harshman and Janeshek, and Scatterday’s present topic was, “Wheeling.”

A river runs through it – high Ohio,

and the rain falls, the sun shines, teams

take the field, and boys kiss girls – a city lives

Stars are born and walk the boards in New York;

others blow their horns in the smoke and piss

of nowhere bars in that same metropolis but now
just go ask Bird who his first son is named after.

A state is born here – sweat, words, and sacrifice.

Trains and sternwheelers and that great national road

running west even yet.

We can begin here. I have. 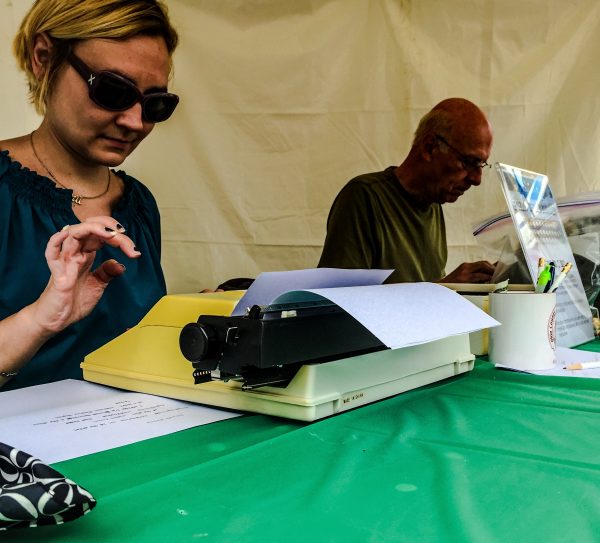 They did so to raise money for the future of the Arts Fest during the fifth annual Wheeling Arts Fest, an event that was expected to be overshadowed by dark clouds and thunderstorms but still attracted a large crowd until the rains arrived in the late afternoon.

Erika Donaghy, the chair of the Wheeling Arts and Cultural Commission, guided the 23-member board through the puzzle that is the organization that has taken place since Arts Fest was created in 2011. Many local artists, like Bob Villamagna, Cecy Rose, and Amanda Carney, were there selling their wares, and live entertainment took place throughout the day. When the precipitation proved too much, Elec Simon & Friends simply relocated to the Vagabond Kitchen for their final performance.

Because the show had to go on!

Arts Fest 2015 was a smashing success thanks to the hard work by Donaghy and many, many others, and so was the unveiling of the statue of the father of West Virginia, Francis Pierpont. Independence Hall site manager Travis Henline portrayed Pierpont, U.S. Rep. David McKinley spoke to the large crowd about an imperative time in our country’s history, and descendants of the Pierpont family also made the trip to the Friendly City for the historic installation and dedication. 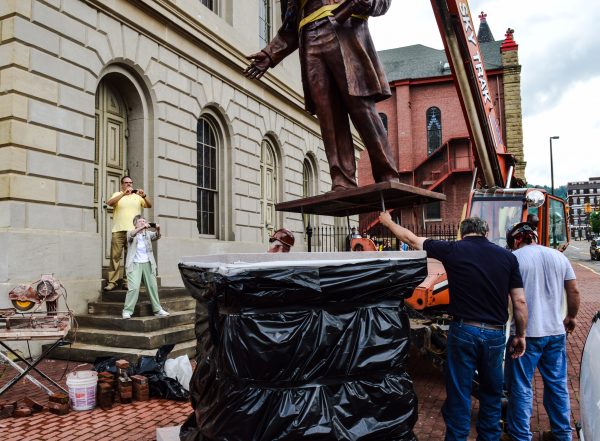 The cameras were out as employees of Walter Construction prepared to install the statue of Francis Pierpont.

The city of Wheeling is blessed to have so many historians who have chosen to be very active with the preservation of the many tales that tell us about the important role this community played during the Civil War era and then with the development of the continued growth of the United States. Henline, Margaret Brennan, Jeanne Finstein, Brent Carney, Sean Duffy, Rebekah Karelis, and several others helped make the 9-foot, 1,200-pound statue a reality on the corner of 16th and Market streets.

From time to time during both events on and near the West Virginia Community College campus, costumed characters could be seen searching for clues connected to the second annual Challenge Wheeling 5K Race. Organizers Christie Contraguerro from Carpet Showcase and Tammy Kruse from Youth Services System welcomed a total of 31 teams that took to the streets in search of the answers for 12 questions they composed about something historical in the downtown area.

Since settlers first arrived in the 1700s, Wheeling has accumulated a wealth of history. This building houses a substantial collection of material related to this rich history in their “Wheeling Room.” Go to this building and find the “Wheeling Room” and a Challenge Wheeling volunteer; then “Crack the Code” for a hint to Clue #4. Shhh! Quiet Please as you take a team picture in front of the “Wheeling Room.” 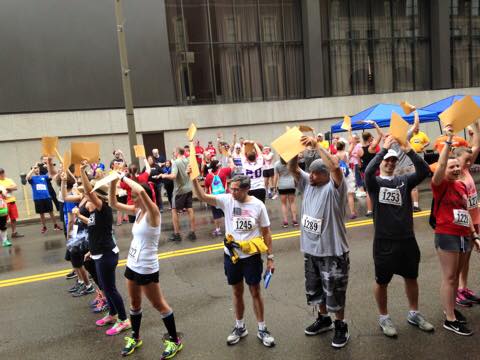 A total of 31 teams competed in this year’s Challenge Wheeling 5K event.

Challenge Wheeling raised funds for YSS, an organization that accomplishes more for the region’s children than most people realize, and Kruse and Contraguerro enlisted their entire families to help orchestrate what is more of a game than a 5K race, and the proprietors of River City Restaurant – Jason Miller and Becky Schmidt – opened up their establishment to a crowd that included the Teenage Mutant Ninja Turtles and Team Fanny Pack, as well as the brides, tutu-clad ballerinas, three blind mice, and hula hooping contestants. Team LLC captured first place with a time of 58:42; Carlo’s Baby was second with a final time of 1:02:30; and third place was won by See How They Run at 1:15:30.

Not one of these events, though, would have been successful without the people who got out and did something, and each one attracted diverse crowds with folks of all ages and sizes. It was especially great to see so many children looking up to their parents while asking questions about the sights and the sounds.

This weekend will not be different, either, as two festivals are scheduled for Heritage Port. On Friday and Saturday, there’s the Rib & Chicken Cook-off , and on Sunday the YWCA will present the second annual Upper Ohio Valley Multicultural Festival.