He admits it. He told a little fib during his very first hockey tryout.

Patrick Kelly grew up in a small town in Ontario, and in 1948 the local fire department had placed an ad in the newspaper about the tryouts at a nearby rink. Kelly was 13 years old, and his brother, who was 16 months younger, planned to attend.

Patrick Kelly had his shoulder tapped by one of the coaches, and he was instructed before taking the ice that if the eliminating tap occurred happened, they were to skate off not to return. Kelly lingered, though, and once he saw his brother get tossed out, too, he sneaked back on and restarted the circular path.

“We both had red hair; well, it was more like flame-orange,” Kelly explained. “We skated around for 10 or 15 minutes, and I saw this one fireman eyeballing me. Then he tapped me and said, ‘You’re off.’

“When I went off the ice, I ran underneath the stands, and as soon as that fireman looked the other way, I stepped back onto the ice and started skating again, and I stayed out there for a while this time,” he continued. “But then that same fireman started eyeballing me again, and he came over to me and said, ‘I thought I told you to go off the ice.’ But I said, ‘No that was my brother,’ and I pointed over to him because he’d been kicked off the ice. That’s how I made that team.” 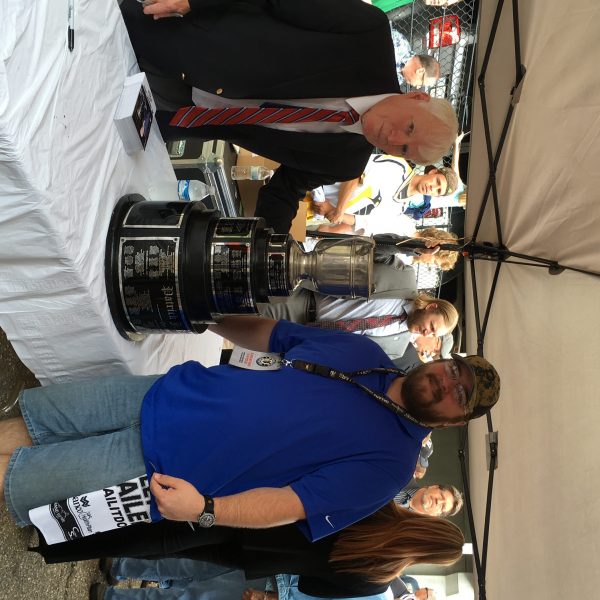 And that was a very good thing for the game of hockey and for the city of Wheeling. Kelly was in the Friendly City last week for two of the three games between the Nailers and the Allen Americans in the Kelly Cup Finals. The Nailers are down in the series three games to two with Game 6 scheduled for this evening in Allen, Texas.

“This is the farthest that the Nailers have advanced in the Kelly Cup Playoffs, and that’s special because Wheeling has the longest membership in the league today,” Kelly explained. “For the size of this city, it’s unbelievable what Wheeling has done to maintain a league team for all of those years because there are have been franchises in much larger cities that haven’t been around as long as the Nailers have.

“There have been a lot of changes in this town since the first time I was here 25 years ago, and what they have done with the arena is just amazing. What a wonderful job,” Kelly said. “Wheeling is a nice town with a lot of great people. And it’s a very historic town with a story to tell, and just maybe there will be a Kelly Cup championship as a part of that story.”

Game 6 is set for this evening at 8:05 p.m. and will be broadcast on WTRF – My Ohio Valley (Channel 3 on Comcast Cable).

Kelly’s playing career did not extend as long as his coaching career, one that started in 1965 in the Eastern League with the Jersey Devils. Following the 1969-70 season, Kelly was named Minor League Coach of Year by Hockey News. He served as head coach and general manager in Charlotte in the Southern Hockey League from 1973-76, and then in 1977 Kelly was hired by the Colorado Rockies of the National Hockey League. 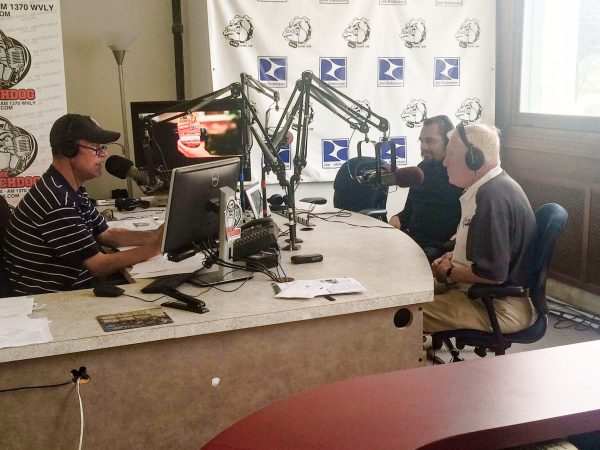 Mr. Kelly along with DJ Abisalih were interviewed on The Watchdog Network (AM 1600 WKKX & AM 1370 WVLY) during the Kelly Cup Finals.

But following a fourth-place finish the next season, Kelly was fired, and that, too, boded well for Wheeling, and that’s because Kelly reunited with a gentleman named Henry Brabham. Known as the founder of the East Coast Hockey League, Brabham operated his businesses along the East Coast, and he hired Kelly to coach and manage his arena in Virginia and to serve as commissioner of the newly formed hockey circuit.

Soon after the East Coast Hockey League formed in 1988 – with five teams – the Winston-Salem franchise owners wanted to sell, and that’s when Kelly received a phone call from Denny Magruder, general manager of Wesbanco Arena and the Capitol Theatre. Since that conversation, Wheeling’s professional hockey organization has developed more NHL players than any other in the league.

“I give a lot of credit to Denny Magruder because there never would have been hockey in this town if not for him,” he continued. “He’s the guy who phoned me when he knew that Winston-Salem was looking for a place to move. That’s what started the ball rolling, and because of him, here we are today.

“Would there be professional hockey in Wheeling today if Denny had not made that call to me? That is really impossible to say, but I do know the Thunderbirds would not have moved to Wheeling in time for the 1992 season if not for Mr. Magruder,” he continued. “And the owners of the franchise and the city of Wheeling really deserve a lot of credit, too. They’ve done what they’ve had to do to keep professional hockey in this town.” 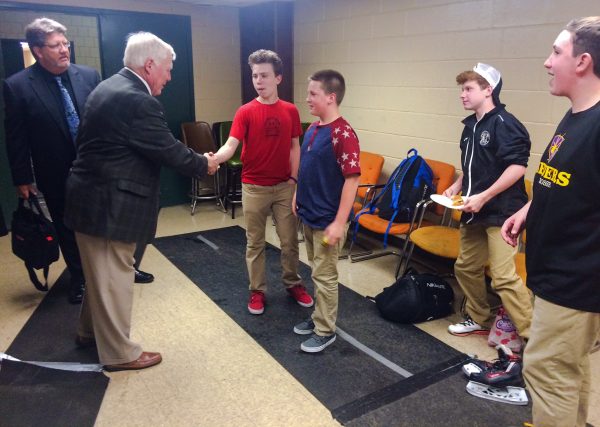 Mr. Kelly made the time during his time in Wheeling to meet several young Nailers fans.

“That’s what I call it anyway,” he said with a laugh. “We have teams on the West Coast, the East Coast, and the Gulf Coast, so why not? It definitely fits. And now that we’ve added seven teams from the old Central League, the ECHL now has 27 teams in six divisions.”

Minor-league hockey is not easy for the players, the coaches, and for the fans, especially now that the vast majority of ECHL franchises are affiliated with NHL organizations. The Nailers have owned relationships with a number of NHL franchises over the past 10 season, most notably with its current affiliate, the Pittsburgh Penguins. The Pens, now with a 3-1 lead over the San Jose Sharks in the Stanley Cup Finals, have orchestrated a plethora of transactions with their contracted players assigned to Wheeling, and even with Clark Donatelli, the Nailers’ head coach at the beginning of the 2015-16 season.

“I know the fans hate to see that happen, and so does the coach, but that’s when everyone has to remember that it’s all about developing those players to move up in the organization. That’s why we formed the ECHL – so kids could start in this league as players and grow into some of the best hockey players in the world,” he said. “And it’s not just players, either. It’s also about the coaches, the officials, t he broadcasters, and everyone else involved with every organization in the league. We started it to develop people to go to the next level.” 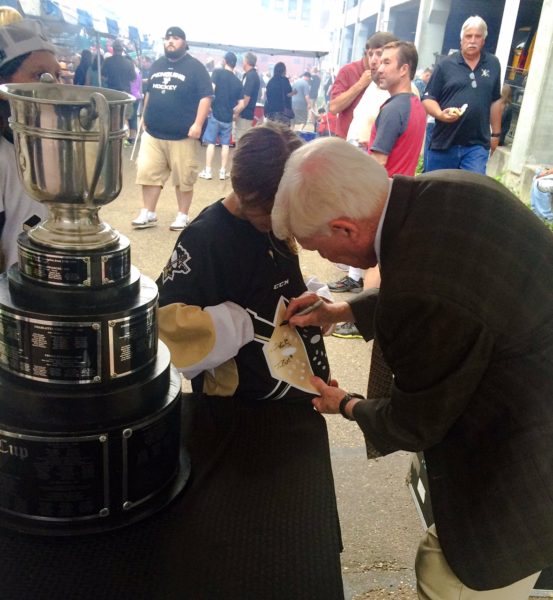 Signing autographs is one thing Mr. Kelly enjoys while visiting ECHL cities across the country.

It is impressive, Kelly believes, that the Nailers finished with a 37-26-5-4 regular-season record let alone advance to the Kelly Cup Finals after losing Donatelli to a promotion to Wilkes-Barre/Scranton, and David Gove to a personal leave of absence after the first round of the postseason. Jeff Christian is now the head coach after serving as an assistant under Gove and he has led the Nailers to playoff wins over Reading and South Carolina.

“It’s hard to believe that they have had three different coaches and have stayed as strong as they have,” Kelly said. “But they have all done a great job with this team and they have had the players working hard for them. That’s half the battle right there.

“A coach can only tell his players what he wants done on the ice. Then it’s up to the players,” he continued. “So these coaches have been able to get their attention. That’s been obvious to see all season long.”

Kelly views his role as an ambassador for the game of hockey and for the ECHL, and that is why this morning he found himself back in Allen, Texas., just waiting to hand over the championship hardware that was named in his honor 20 years ago.

“I always thought when I got a chance to coach in the National Hockey League that it would be the thrill of my lifetime, but when they named the cup the Kelly Cup in 1996, it overtook anything else I have done in the game of hockey,” Kelly admitted. “When league officials made that decision, I couldn’t believe it. I was honored more than anyone could imagine.

“I’ve been hockey for 63 years, and it’s not a job to me. Never has been. When you’re doing something that you love to do, it’s not a job,” Kelly concluded. “It’s a love. It’s a passion. It’s in your heart.”

(Photos provided by the ECHL)