The renovations inside and outside Wesbanco Arena continue, and two separate projects are on schedule, according to the general manager of the facility.

Interior seating and the installation of handrails, Denny Magruder reported, should be completed by the end of August, and the front façade is expected to be finished by June 1, 2016. The façade project cost $4.2 million, and the new seating and handrails will cost $1.4 million. Both the interior and exterior renovations are funded by the municipal sales tax implemented in October 2013. 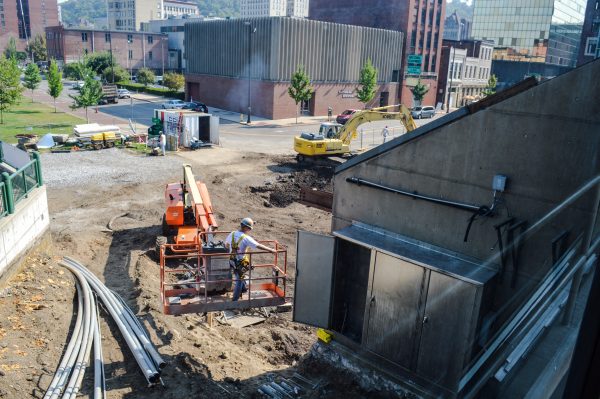 The front area along 14th Street appears much differently than what local residents have seen for the past 38 years.

“We are right on schedule with both of the projects, and we’re very pleased about that,” the longtime general manager explained. “I know it’s difficult to see the progress on the side of the arena, but anyone who has been near the building the past two weeks can tell that a lot of work is being performed on the front.

“We are now working on establishing the accessibility ramp and another new entrance on the river side of the building,” he continued. “In the near future there will be ways to get in and out of the building so people can start visiting us again. It’s been great to see everyone working together on these projects so we can keep the timelines that we have communicated to the public.” 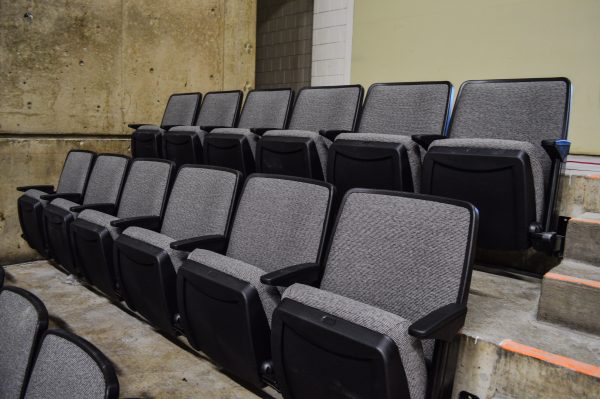 The installation of the new seating is expected to be complete by the end of August.

Colaianni Construction is performing the façade work, and Cattrell Construction is guiding the interior makeover. Irwin Seating is a subcontractor for Cattrell and its employees will be installing the new charcoal seats. The arena, Magruder said, will lose 150 seats as a part of project, but he does not feel as if the impact will be significant.

“We knew that it was a possibility because of how different the new seats are compared to the old ones that we have had here since the day the building opened in 1977,” he explained. “Right now the inside of the arena looks a bit like a bomb shelter because there are no seats, and there’s a lot of dust because of both of the projects, but it’s only a matter time when local residents will see how much better it will be. 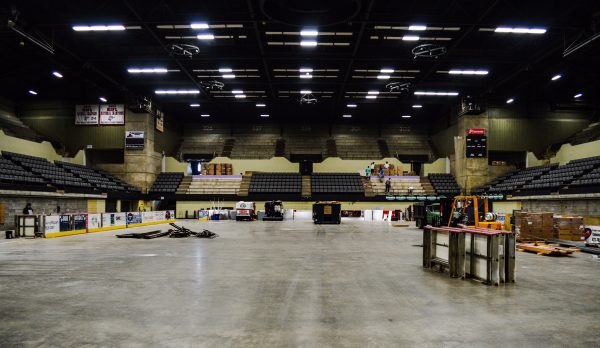 “At this time our box office is operating out of the area where the Convention and Visitor’s Bureau is on the base of the Intermodal (Transportation Center),” Magruger continued. “As soon as we can, we’ll move the box office closer to us here at the arena. By Oct. 1, we should be able to have the box office inside the arena.”

For Nailers games, Wesbanco Arena will have 5.250 seats available, and when temporary floor seating is an option as many as 7,000 tickets will be on sale.

Magruder said the next event scheduled for Wesbanco Arena is a bridal fair set for Sept. 27, and the WTRF Job Fair will take place on Sept. 29. The Wheeling Nailers are not scheduled to begin training camp until early October. 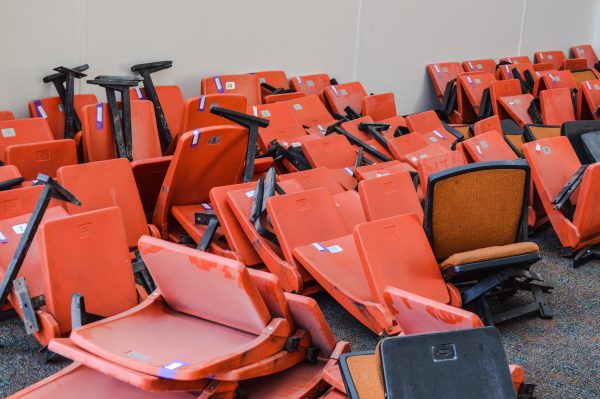 The original seats have been offered to those who want a keepsake.

“The month of October is when we will really start getting busy again, so we plan to work with our local media outlets to educate the public as much as possible concerning the new entrances and exits,” he said. “And we’re looking forward to a very exciting winter with the Wheeling Nailers because the new video boards and the new seating will all be in place for the fans.

“We’re going to make getting in and out of the building as convenient as possible while the project on the exterior continues. There will be a lot of signage so we can guide the people in and out,” Magruder continued. “We are very much looking forward to the completion of the façade project because we believe the front lobby will be spectacular.” 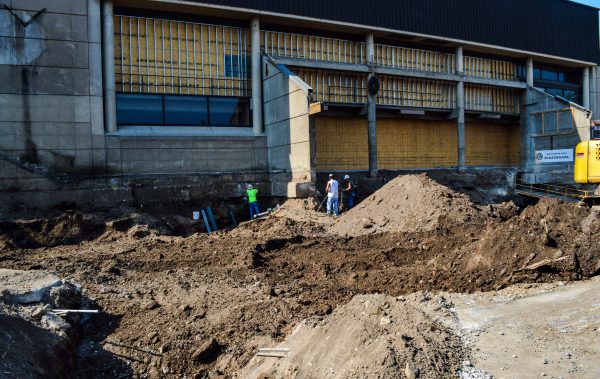 Employees of Colaianni Construction have been busy the past two weeks preparing the arena’s front for the new facade.

“You do not see many buildings of this type and of this age in many cities around the United States because many of them have been demolished for whatever reasons,” Magruder said. “But this building has good bones, and once both of these projects are finished, it will return to being a first-class facility.

“I believe when all of the work is completed, people are going to be very happy with the decisions that have been made,” he added. “We are very much looking forward to seeing and hearing the reactions and opinions from the people after they experience their first event inside.”

Ward Five Councilman Don Atkinson echoed Magruder’s belief that the arena improvements will enhance the experience for Nailers fans and everyone else who attends events post renovations.

“It was long overdue; that’s for sure,” he said. “With the video boards and the new seating the inside of the arena, it will really be a different place for the hockey games and other events. But the new space included with the façade project is really going to open up the possibilities.

“There’s a lot that takes place inside the building that a lot of people don’t realize because they just concentrate on the games or the concerts,” Atkinson continued. “I’m pretty excited to see what it all looks like when it’s all finished, and I think there are going to be a lot of people very surprised with the improvements.” 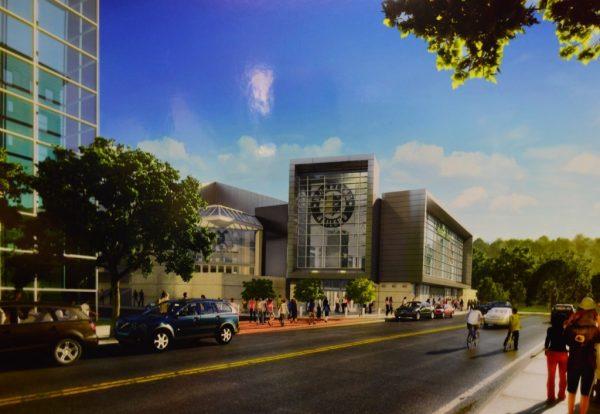 An artist’s rendering of the new front facade.