A diverse collection of local presenters will be featured during ReInvent Wheeling’s “Show of Hands” event this Wednesday evening at the Capitol Ballroom in the Friendly City’s downtown district.

The event, the sixth and now in its second season, is an opportunity for a local business or organization to gain funding for a particular goal that is explained in detail during each presentation. The event will get under way at 6 p.m. with East Ohio banjo player Steven Moore providing the live entertainment, and the Vagabond Kitchen is set to cater the event once again.

Each of the four presentations is scheduled to begin at 6:30 p.m., and each of the four participants is allotted four minutes to make their pitches. Following the individual presentation each participant will field four questions from audience members, and at the end the audience members are asked to vote for their favorite project. The one that collects the most votes wins the prize money. 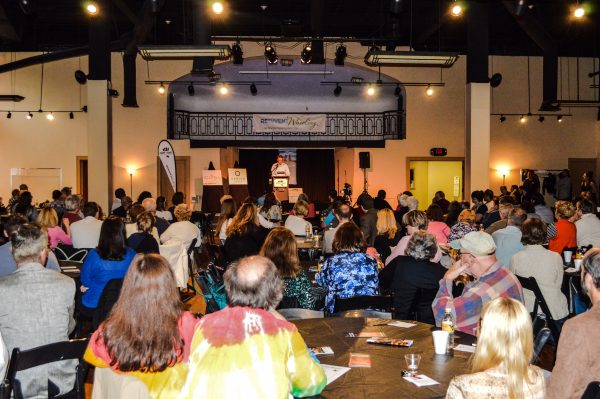 Brandon Holmes from Green Plate LLC presents his idea to a crowd of more than 200 attendees.

The winner in May was Ron Scott Jr. and his Ohio Valley Hip Hop Awards project, and he collected $1,890.

“’Show of Hands’ is all about bringing the community together for a couple of reasons,” explained ReInvent Wheeling director Jake Dougherty. “The first reason is so our community can learn more about some of the projects, new businesses, and new ideas that are here in Wheeling, and the second reason is for those presenters to have the opportunity to gain the support of the members of the community.

“And our community wants to be involved. We have seen that during the first five of these events because attendance has increased since the first ‘Show of Hands,’” he said. “This is a chance for crowd-sourcing to take place because we have had presenters in the past whose idea or project wasn’t eligible for a traditional loan from a bank.”

International law firm Orrick, Sutcliffe & Herrington is donating $1,000 for each “Show of Hands” event, and the winner collects that amount plus what is generated by donations offered by those who attend.

“During the first year of ‘Show of Hands’ the majority of our presenters were formal businesses that we trying to get some extra funds for façade improvements or other improvements with their businesses,” explained Jake Dougherty, director of ReInvent Wheeling. “This time is seems to be more project based, and we’re happy about that because one of our goals is to get everyone involved with this opportunity.

“I believe the four projects for Wednesday evening are very different from each other, and that’s a great thing,” he said. “We have always wanted ‘Show of Hands’ to become an outlet for new ideas to take hold in Wheeling, and we feel that is happening now in our community.” 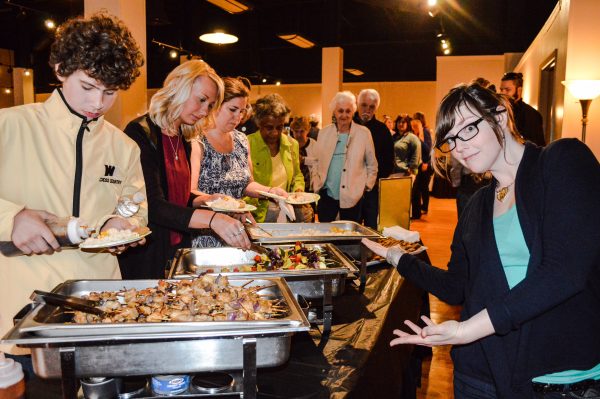 Katie Welsch from the Vagabond Kitchen presents the catering for the May event at the Capitol Ballroom.

The scheduled presenters are as follows:

“This will be a pretty unique presentation because it concerns a project within a local business,” Dougherty explained. “The project is called, ‘Teas that Transform,’ and it will be about educational sessions about the teas and where those teas originated.

“A lot of the teas are international so that will give local folks that chance to not only learn about what the teas can do for you, but the sessions will also be about those regions of the world and what issues the people there are dealing with at this time.”

“This presentation will invoke some of the social issues that we are experiencing in this area at this time,” Dougherty said. “One thing that we hear about pretty often is that there is not a lot to do for our young people between the ages of 16 and 21, and this project is addressing that.

“Plus, we know Wheeling and the Upper Ohio Valley is no different from any other area of the country when it comes to the drug abuse issue, and the Ohio County Substance Abuse Prevention Coalition tackles that issue on a daily basis,” the director continued. “They make efforts every single day to get more people involved so the awareness consistently increases, and we are excited that those who attend ‘Show of Hands’ on Wednesday will have the chance to learn more about the issue.” 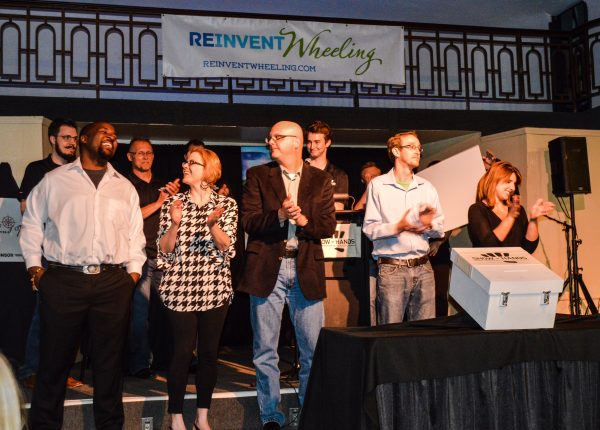 Ron Scott Jr. reacts to the announcement that his project, the Ohio Valley Hip Hop Awards, was voted as the winner during the May event.

“Jeremy is very, very talented, and he has experienced a lot of success thus far,” said Dougherty. “His presentation is an example of how he is always making efforts to expand with new projects.

“I believe Jeremy is a young man who is attempting to capture some of the excitement that is in Wheeling right now, and he’s not afraid to put himself out there in the effort to allow what he is doing to grow,” he continued. “He wants to be a part of the growth that is taking place, and his presentation is example of that.”

“I believe George will be the youngest presenter that we will have to this point, and that’s a huge positive to us because it shows that our efforts with ‘Show of Hands’ is reaching community members of all ages,” Dougherty said. “He and his partners with the production company have been working very hard, and this presentation will be part of their effort to gain more technical equipment.

“George is very interested in showcasing some of the progress that is taking place in this area, and he is also very interested in highlighting the good things that are already in place,” he said. “In video production the technologies are always changing, and he wants to keep pace.” 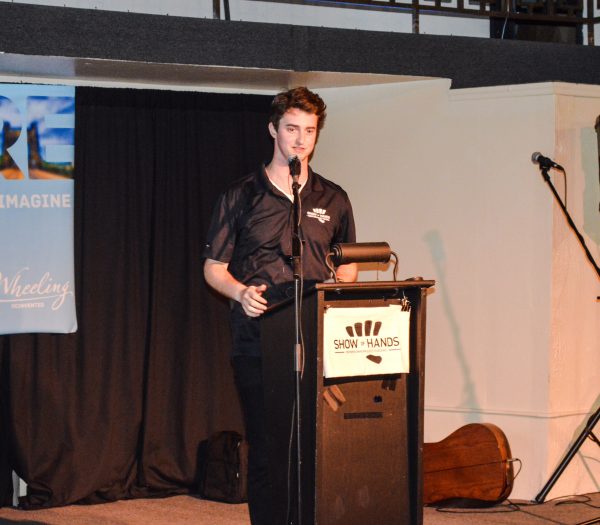 Jake Dougherty, director of ReInvent Wheeling, informs the large crowd about how “Show of Hands” works.

A second sponsor, St. Matthew’s Episcopal Church, is now onboard, and Dougherty believes the congregation’s interest is a sign that many local residents in Wheeling are very interested in the future of the Friendly City.

“St. Matthew’s has provided some additional funds for the event, and that’s because those folks are very excited about what’s been happening in the city during the past several years,” he said. “They have made the decision that they wish to be involved with the objectives of the event because they wish to see our city move forward more and more in the coming years.”

This afternoon, local media members and the participants will have the opportunity to learn more about the “Show of Hands” events that started in 2014. The preview begins at 1:30 p.m. at the Capitol Ballroom.

“All the media outlets have joined us for the first five events, but it’s been on the evening of the event,” Dougherty explained. “We have added this preview to give our local media members the chance to learn more about the presenters, and it’s also a chance for the participants to become more comfortable with the setting.

“We have had presenters during the first five events that really didn’t know what to expect, and some people do not have the experience with speaking in front of that many people,” he said. “It will also give us time to fully explain how the program goes so the media can get more involved than they have been over the past year.” 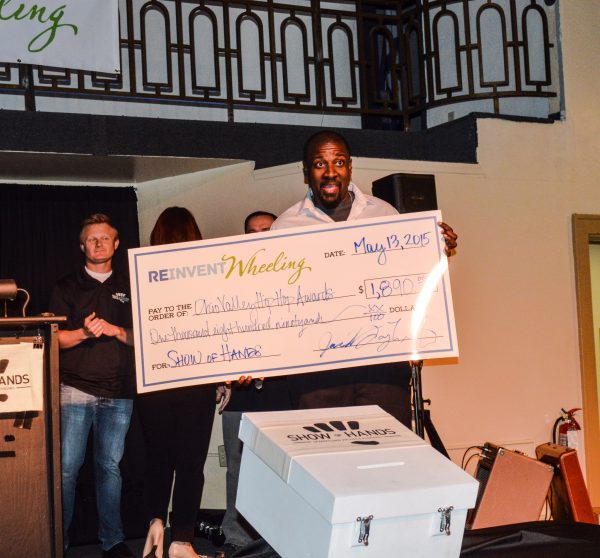 Scott poses with the “big check” worth $1,890 thanks to Orrick, Sutcliffe & Herrington and those who attended.

Those wishing to attend will be asked for a $5 donation that adds to the amount won by the presenter receiving the most votes. People who want to donate $10, will be offered a couple of minutes on the microphone to promote a business, event, or a project of their own. The doors will open at 5:30 p.m.