Up and down a tall ladder with a high-rise pack on your back that weighs more than 30 pounds.

Then into a ventilation room before dragging a 160-pound human dummy 150 feet.

Of course, there’s the maze walk in total darkness.

And then up and down three flights of stairs – four times.

After those physical challenges, it’s time to hit the pool to swim four lengths measuring 100 yards.

And it’s all timed, and, yes, there are time limits. 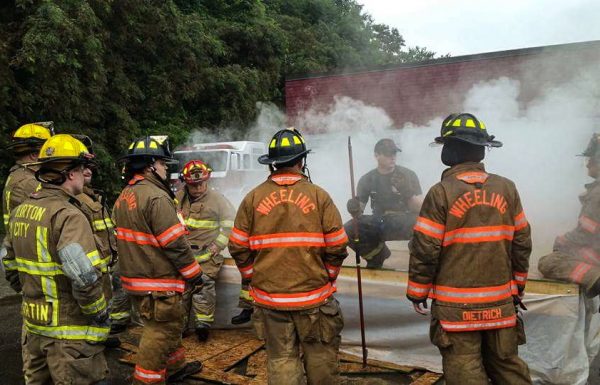 A portion of the firefighter training that both Bryan and Hoffman participated in involved the introduction to smoking conditions.

That’s an example of the Candidate Physical Abilities Test each and every member of the Wheeling Fire Department must conquer when applying to become a member, and it was no different for the municipality’s first two female firefighters, Audrey Bryan and Brittany Hoffman. The pair joined Daniel Brown last July and have been impressive to their colleagues and to Fire Chief Larry Helms.

“It’s a pretty rough test, and that’s when we lose the most candidates, male or female,” the chief explained. “But to be a firefighter in Wheeling, W.Va., you must be able to do well on the physical tests so we can be sure you are able to do what’s expected on the emergency calls.

“Some of what is included is pretty basic as far as physical endurance and strength,” Helms continued. “But then there are parts that involve doing physical activities that not a lot of people have ever dreamed of doing, but both Brittany and Audrey accomplished that, and they both have been very impressive on the job.”

Helms has been a member of the Wheeling Fire Department for the past 31 years and has served as chief during the last decade. Females have applied before Bryan and Hoffman, but these two ladies are the very first to pass the written and physical tests and to accept the positions. 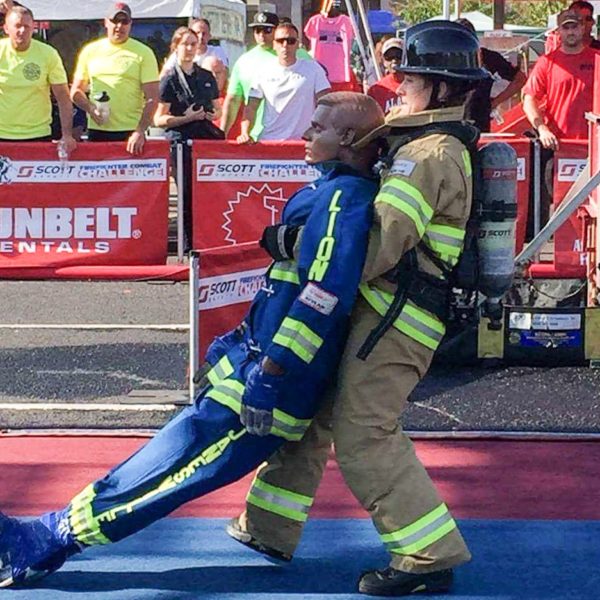 “We have had females on our list before who have tested, but it’s been a situation where we have not reached them in order to fill positions with the fire department,” explained Helms. “It’s had everything to do with where they fell on that list and the number of openings that we have had.

“These two young ladies have turned out to be great firefighters; that I can tell you, and I don’t have any mixed feelings about it at all,” he said. “I was never worried about their performance, but I did have to wonder how it would work with the other members of the fire department, but that’s been outstanding, too. There is a period of time when all firefighters have to prove themselves, and they certainly have accomplished that.”

The historic hiring of Bryan and Hoffman, Helms reported, may lead to additional females since there is another female who has applied to fill the department’s one vacancy, and she finished near the top of the testing requirements.

“(Bryan and Hoffman) have definitely proven that they can do the job, and now our current list has the most females we have ever seen,” Helms reported. “We now have three additional females who have tested and want to join the Wheeling Fire Department, and we will be interviewing one of them for the opening that we have right now.

“There will be several individuals who will be interviewed, and that includes one with military experience,” the chief explained. “We usually interview three candidates to fill a position, so we’ll have to see how it all works out in the future.” 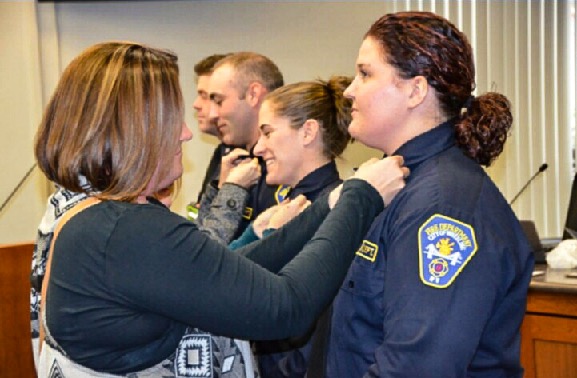 Hoffman and Bryan are the first two female firefighters in the history of the Friendly City.

Although the 22-year-old Bryan became a department member 10 months ago, she experienced her very first fire this week. Bryan, who is also a paramedic and soon to graduate from nursing school, fractured her elbow last December and was off-duty until April.

But then the emergency tones summoned and she hopped aboard Ladder 1to race to an area in Woodsdale near Tim Horton’s on National Road.

“Everything went really smoothly, and it was definitely an adrenaline rush for me,” Bryan said. “It was a kitchen fire at a residence, and we just did what we were trained to do. I can say that I am pretty happy that the first fire is now behind me, and now it’s time to move forward.

“I was on Ladder 1 for the call and, of course, we were all fully geared up and ready for whatever we encountered,” she said. “Engine 2 arrived before we did, so they had assessed the situation upon their arrival, so it was a matter of going through our list like making sure the electric to the house was off.”

On the way to the minor blaze, Bryan explained, she concentrated on the training she had received and her expected duties during a number of possible scenarios. If there was life to save, she was confident yet still a bit anxious.

“I’ll admit that I was nervous, but once we arrived on scene the training kicked in,” Bryan explained. “I knew we would get that call eventually. If you join a fire department, you have to expect fighting a fire, and I experienced one during my academy training, but this was the first in 10 months on the job. 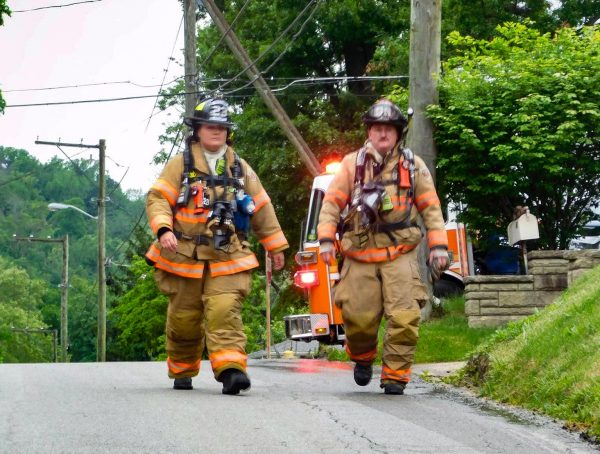 Bryan has been deployed on many calls since joining the department in December, but her first fire was earlier this week.

“I’m glad that the first one is under my belt now, so my nerves will be much calmer in the future,” she said. “I now know how it feels.”

Soon after returning to the fire department’s headquarters, other members of her Ladder 1 crew congratulated her and also posted a photo of her on Facebook.

“They were really excited for me because they knew how they felt on their first fire call,” Bryan said. “Some of the guys had a little fun with me, but after the call they all congratulated me because you only have that first one once. Now, it’s time to make sure I’m ready for every call we get while I’m on duty.

“This is what I’ve wanted to do since I was a teenager,” she said. “I was a volunteer firefighter in Cameron when I was 17, so I knew I could do the job here in Wheeling. I did consider a challenge, but it’s not something I’ve dreamed of doing since I was a child, but as I grew older, I knew that becoming a firefighter was a calling for me.”

To Bryan, though, it’s not about making history in Wheeling, W.Va. Instead, her service to the city allows her to continue a personal mission she adopted while in high school.

“I really wasn’t nervous about being one of the only females because I had already known a lot of the guys before I joined the department because of the trainings and because I had worked in an emergency room before,” she said. “I am really enjoying being a firefighter here in Wheeling because of the interaction with the other members and because of the duty itself. This is about taking care of other people, and that’s what I’ve always wanted to do.” 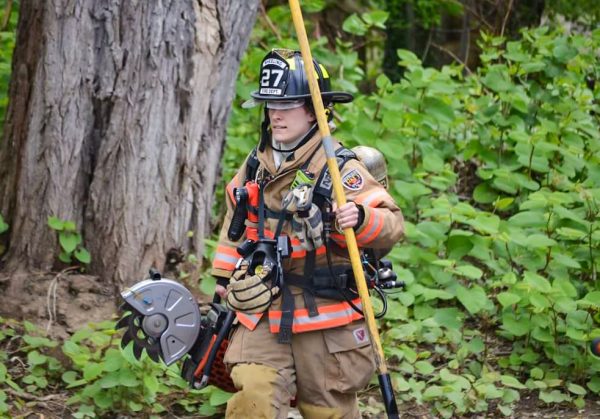 Hoffman is a full-time firefighter for the city of Wheeling, and is a part-timer for the department in Peters Township near Pittsburgh.

The firefighters in Wheeling work a schedule that allows many of them to also obtain a part-time position in a completely different line of work if they wish.

But not Hoffman. Nope. Not this 24-year-old.

This western Pennsylvania native not only works full-time for the Friendly City’s department, but she’s also been hired part-time by the Peters Township Fire Department.

“It’s been something I’ve been interested in since high school, but I kept pushing it off because of doubts I had about being able to do it,” Hoffman admitted. “But then one day I decided to give it a shot, and my hometown department had some openings. I joined the volunteer side in Peters Township back in 2010 and fell in love with it, and since I’ve join Wheeling I was also hired by Peter’s Township so that’s what I do when not working in Wheeling.

“But that’s when I knew this is what I wanted to do for a living,” she said. “And since I joined, I’ve been on a few calls that involved fires. I work with a great group of guys, and it’s been a lot of fun to put your training into action while working with the others to accomplish our goals.”

After earning her fire science degree in New Jersey, Hoffman applied and tested. She wasn’t concerned with the physical tasks involved because she has competed in firefighter combat challenges and currently is ranked worldwide. 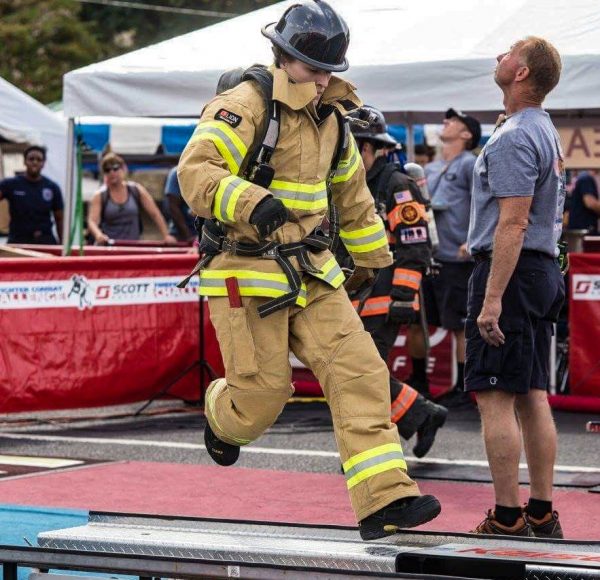 Hoffman is very active when not on duty in order to avoid as many injuries as possible.

“I just graduated from college with a fire science degree and was looking at becoming a full-time firefighter,” Hoffman explained. “I saw that Wheeling was testing to fill three positions, and I knew a few people associated with the department, so I decided to take the test and give it a shot.

“The tests are not easy,” she said. “But the guys I knew told me that Wheeling was a great place to work, so I thought it would be worth it, and I can tell you now that it definitely is worth it.”

Hoffman also was not worried about the interaction with a nearly all-male fire department because, well, she grew up with five brothers and has always been very active. Her mother, on the other hand, was a much different story in the beginning of her career.

“My family has been extremely supportive of me because they have known that this is what I’ve wanted to do for a lot of years,” Hoffman explained. “I think at first my mother was in a little bit of denial for a while because she would tell people that I was going to be an arson investigator. She had a tough time accepting the fact I would be the one running into burning buildings, but she’s now come around to the idea, and she’s very proud of me.

“I am the first career firefighter in my family, and that makes them all pretty proud of me because of what the job calls for,” she said. “I feel I’ve proven myself and I’ve not been treated any differently than anyone else. The guys on my crew have been fantastic; they all have been very supportive; they have congratulated me for what I’ve been able to accomplish, and that’s all anyone can ask for.”