The land has been sculpted, the posts set, and soon the fencing will go up, and the grass will be planted at the Fitzsimmons Family Dog Park in East Wheeling.

The two-acre facility will be located near the Tunnel Green athletic complex and will include two different areas. At least 1.35 acres will be reserved for larger dogs (above 30 lbs.) and .65 acres for small dogs (under 30 lbs.).  Each section will have a crushed stone walking trail and its own water and waste stations.

“At this point we believe the park will be open by June 1, but a lot depends on the weather right now,” explained Gregg Boury, one of several active members of the dog park committee. “There are several things that still need to be completed, but the most painstaking part is seeding the grass and hoping that the grass will take hold quickly enough to be open by then.

“That all depends on the weather because we really need that to be settled before we allow all the dogs to run in the two parks,” he said. “The fence is not complete yet, but it will be in the near future, and the grass will be seeded very soon, too.” 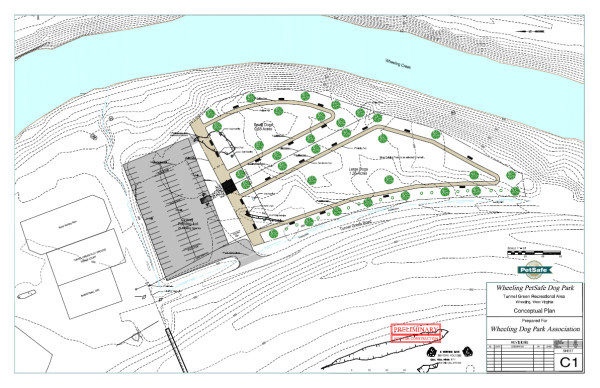 The Wheeling Dog Park Association has possessed the blueprints for the two-park facility for more than a year.

The effort to construct a dog park in Wheeling was launched in mid-2012, and in 2013 online voters captured a $25,000 grant from PetSmart’s “Bark in Your Park” competition in 2013. Once those funds were secured, the park committee attracted much attention and a lot of momentum.

Since then, however, extended amounts of time have been allocated on site selection and fundraising.

“The biggest chunk of time that has been spent since this effort began was spent vetting a different location in the Elm Grove area, and one of the reasons for that was because we were looking at two parcels of land, one that was owned by the city and another that is owned by the state of West Virginia,” Boury said. “While the city was on board immediately, it did take some time to work with the state, and ultimately the site at Tunnel Green was chosen.

“This is a grassroots project and not something connected to a corporation or government funds,” he continued. “And if people think about it, they will realize that grassroots projects do take a few years to come together. No one wants this park to be open more than I do for my dogs, so we are moving forward so we can get the park opened as soon as it’s possible.”

The facility is being developed on the lot south of the existing ball field and roller hockey rink at Tunnel Green and will become part of the city of Wheeling’s park system. The site has vehicular access from 18th Street and pedestrian access from the trail, along with adequate parking. 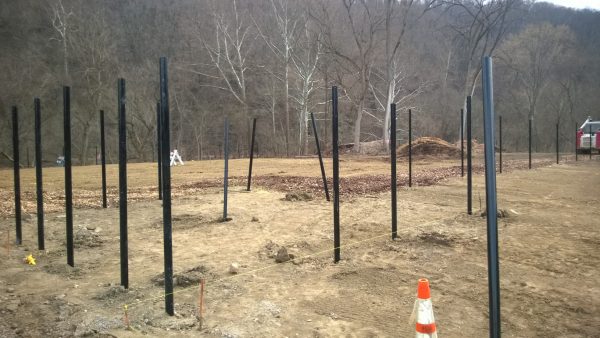 The fence post locations for the Fitzsimmons Family Dog Park were established in the early spring.

“Enough cannot be said about the Fitzsimmons family stepping up and contributing the $25,000 for the naming rights of this facility,” Boury said. “They are a great family who are very civic-minded because of how much they appreciate the Wheeling community.

“But we do have to raise more funds so we can include more amenities within the parks, and that’s why we will be holding another Yappy Hour at Quaker Steak & Lube at The Highlands,” he said. “It will be April 23 from 2-5 p.m. in the patio area, weather permitting, and we plan to have live entertainment and even an outfit contest for the owners who wish to participate in something like that. We’ve had a few of these Yappy Hours, and they have been a lot of fun with a lot of people attending, so we are looking for this event to be a great time for the owners and for the dogs.”

Quaker Steak and Lube will contribute 15 percent of all food sales that occur during the event, and the dog committee will stage a Chinese Auction featuring a number of baskets, and other raffle-type activities. Since the effort’s introduction five years ago the goal has been to improve the quality of life in the Friendly City, as well as to establish an amenity that attracts others to move into the municipality.

“Dog parks are an established amenity in many cities across our country, and an example is the fact that the city of Morgantown has two of them. I’ve read in the last couple of years that dog parks are being developed more quickly than any other park in the United States,” Boury reported. “What people have found in those cities is that dog parks are a very important part of those communities because it gets people shoulder-to-shoulder who are like-minded. 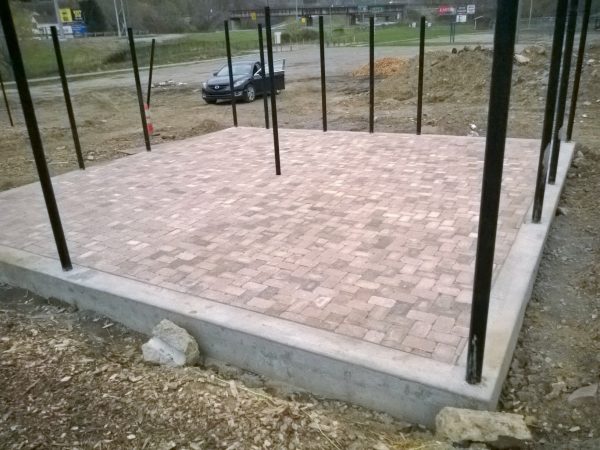 The base of the park’s entrance was recently completed and soon one side will lead to the “big-dog” area and the other to the space for dogs under 30 pounds.

“It gets people out and gets them talking with each other, and that’s going to be a great part of the Fitzsimmons Family Dog Park here in Wheeling,” he said. “And we have also learned that people who are looking at new cities to move to very much appreciate the existence of a dog park. That’s another part of this, and I can tell you that this is going to be a beautiful park for our community. Once people are driving by it every day, they are going to come to appreciate it very much.”

There will be a list of rules posted at the park and a few guidelines for those who visit the facility with their dogs to follow. The final list will be made available prior to the park’s grand opening. 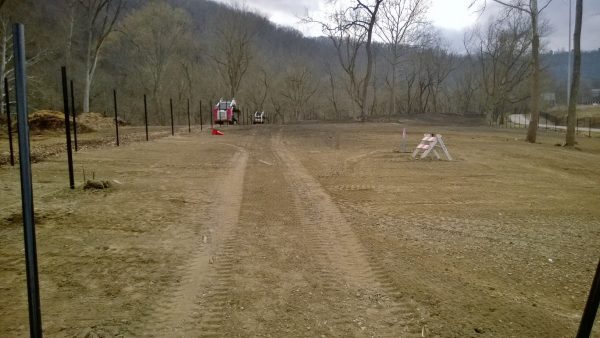 The earthwork has been taking place since late summer of 2016, and now the site is ready for the grass to be planted and the fencing to be completed.

“Dog parks are self-governed by the people who use the park, and that’s why there have to be some guidelines for people to base their decisions and conduct on,” Boury explained. “Because it is a city park, the operation of it has to follow the rules that are already in place, including the dangerous and vicious dog ordinance. That’s why the rules are absolutely essential for this facility.

“There also may be situation when an owner’s dog is a little more aggressive than others, and there are rules about that kind of behavior, too,” he said. “We just want this dog park to be a very safe environment for everyone who chooses to use it.”