He ran twice and lost twice before winning the voters’ approval in 2014 to serve in the West Virginia Legislature as one of two delegates in the Third House District, an area that covers most of Ohio County.

The lawmaker, an attorney in Wheeling and co-chair of the “Retention Committee” created by Mayor Glenn Elliott, has since learned much about being a candidate and about being the representative of an area where the people are collectively battling to shed the rust from past industry that’s gradually shuttered during his lifetime. He is the son of a teacher and a union electrician whose life began in a trailer park in Marshall County, and Fluharty’s life also was touched by unbelievable tragedy 12 years ago when three family members were murdered during a robbery attempt in Ohio County.

Fluharty, the minority vice-chair of the House’s Industry and Labor Committee, has made headlines, too, for speaking his mind as a Democrat serving in the House of Delegates because he has dared to speak against the chamber’s Republican majority on issues connected to labor, coal mining, the gas and oil industries, and higher education. Recognizing the state’s issues with decreasing population and financial shortfalls, Fluharty introduced the “Stay in the State Act,” legislation that proposed tax credits for businesses that employ in-state college graduates and assisting the employee with paying down student loans.

And although he and fellow incumbent Del. Erikka Storch are members of different political parties, they cooperated with each other during the past two legislative sessions for the betterment of their constituents in the Third House District. Fluharty enjoys it, too, even more than he imagined he would because of the problem-solving parts of the job he initially witnessed when he was a legislative intern as an undergrad at West Virginia University. 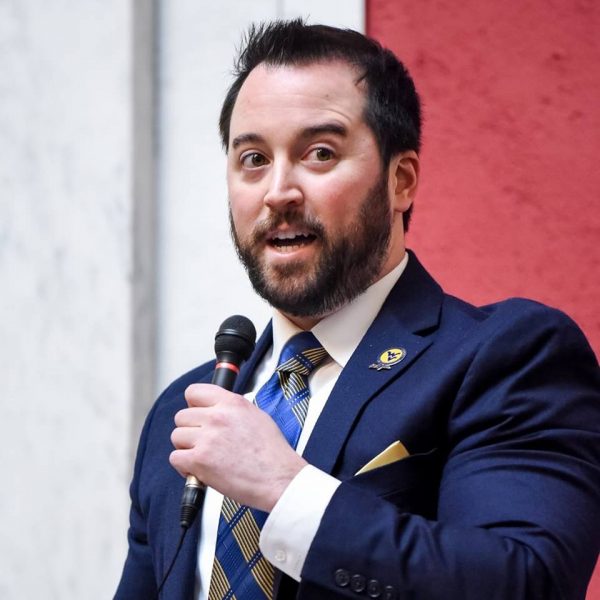 The legislator is no stranger to floor speeches in the House of Delegates.

During the past two months he has spent his spare time knocking on doors within the district, not only to campaign but to learn more and more about what is on the minds of the voters other than a presidential cycle circus. Fluharty, who also is a member of the House’s judiciary and health committees, feels he learns while going door-to-door because he visits both Democratic and Republican porches.

The number one issue facing West Virginia continues to be our inability to retain our youth. We are the ONLY state in the nation with a declining population. In West Virginia, young people leave the state at the third highest rate in the country.  Those that do remain default on their student loans at the second highest rate in the country. The result? We have a declining economy where an entire generation is missing from the economic equation.

I have introduced the “Stay in the State Act” to change these statistics. The bill was introduced last session, garnering complete bipartisan support, including Del. Storch as a co-sponsor, and the praise of Generation West Virginia, a statewide non-partisan organization dedicated to attracting and retaining our young talent.  The bill would allow tax credits to be given to employers for helping pay down their employees’ student loan debt if the employee is a graduate of an in-state institution and resides in West Virginia. The result being, it would incentivize our youth to accept positions within our state with the knowledge that their burdensome student loan debt would not be as crippling to them if they remain here.

With such a mechanism in place, we will then have these individuals entering and contributing to our economy at an earlier age by having them spend their money here in West Virginia and not in another state for a comparable job. We want them living here, buying homes here, and raising their families here. We also want to make the decision to leave harder and allow for our business owners to add another layer to our employment opportunities all while keeping West Virginia families together. Similar legislation has been very successful in states like Maine and Michigan in recent years. This is the most important issue facing our state because our economic outlook for years to come will continue to be bleak if we keep trending in this direction. I am also honored that Mayor Elliott has chosen me to co-chair the Retention Committee so that I can play an active role in fighting this issue on the local level while serving as a liaison to the legislature. 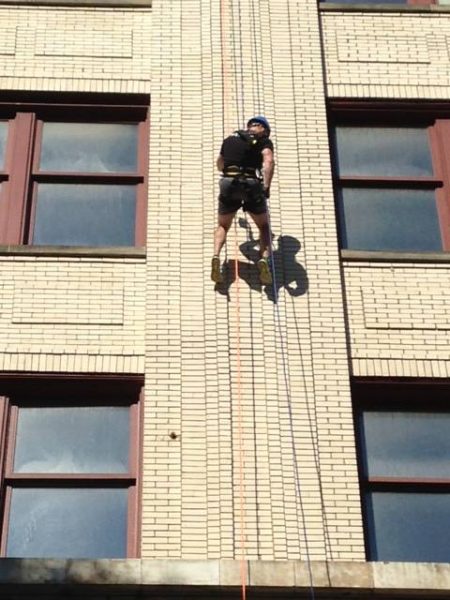 Fluharty participated in the YWCA’s “Over the Edge” fundraiser this past August.

What is the most important issue with constituents in the Third House District, and how do you believe that specific issue should be addressed?

In a county where oil and gas companies are taking over the roadways to the detriment of our infrastructure and the citizens within the district, I believe the state has an obligation to make sure they are paying their fair share. Last session, I introduced an amendment on the House floor that would do just that. The current severance tax sits at 5 percent. In other states with a similar population it is much higher. Meanwhile, the shirt on your back is taxed at a greater rate than the minerals under the ground. Our tax structure should be fair for everyone involved in our economy. My amendment would have increased the severance tax just 1 percent with all of the money going to the State Road Fund to be diverted back to counties where drilling is rampant like Ohio County. That is how we address the issue, stand up to fairness, and properly bargain for a commodity that belongs to the people of West Virginia.

Politicians in Charleston have failed to realize for decades that diversifying our economy is a necessity, and we are currently paying the price for it. The first step is to understand that people drive diversification, not government.  However, the government can play a role. Small businesses are our economic driver. In recent years the state has had the phasing out of the franchise tax, reduced corporate income tax, and made personal income tax cuts; however, it has not stimulated diversification. This is in large part because it does not focus on the individual trying to start a business but rather focuses on those already established. 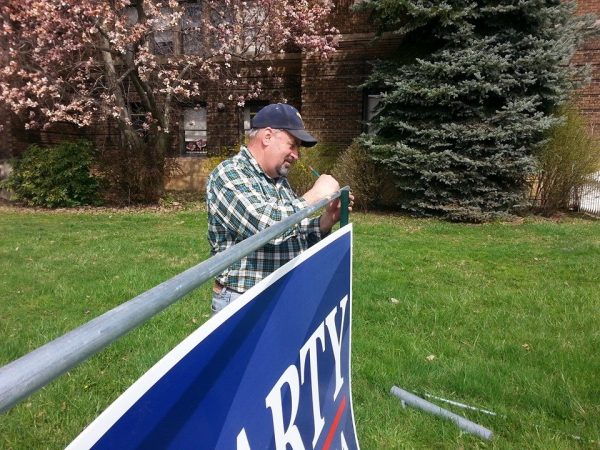 Fluharty’s father assists the lawmaker’s campaign with the campaign signs located throughout the Third House District.

We need to have more people involved. I have always supported the idea of small business incubators, which would allow for a minimized risk in starting a business. This would be a catalyst for economic diversification.  It has been very effective in places like Morgantown, where West Virginia University partnered with the city to create a structure where our best and brightest can seek opportunities here at home. The result is a thriving small business community and growing local economy. The state should take notice of what is working and build off of it instead of playing from the same failed playbook. We know that investing in people, infrastructure, and technology is where economic success is found in the new, ever-changing economy.

As I have shown during my time as a legislator, I can work with anyone regardless of party affiliation and will continue to do so no matter who sits in the governor’s office. However, given the economic crisis our state is currently in, I believe Jim Justice is best suited for the position. He understands how to turn things around. He has proven that with the Greenbrier. As a coal operator and facing hard economic times where many coal operators decided to run to bankruptcy court, Justice has hung in with his employees to keep West Virginians working. What I also like about Justice is that he is authentic.  He doesn’t need the position. He is not a career politician. He is doing this for the greater good and not for out-of-state interests. There is a value in authenticity, and far too often it is lost in our political system. 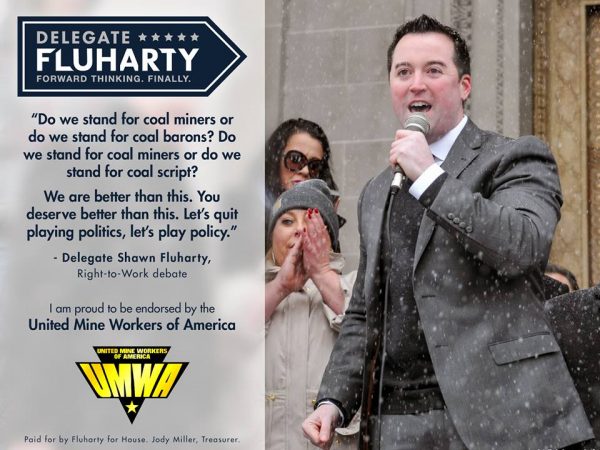 As one of 100 members in the House of Delegates, Fluharty has attracted endorsements from a number of labor organizations.

How important is it to the 3rd House District to encourage growth with the gaming industry since Wheeling is the home of one of four of the state’s live racing racetracks?

As we saw last legislative session, there are some people in Charleston who are dead set on seeing our racetracks disappear. It simply does not make sense. Taking money out of West Virginia and losing jobs is not an economic stimulus plan. It would have a devastating impact on our district and to the Northern Panhandle.  The racetracks bring people in and keep people employed. We have had many families relocate to our district for the sole purpose of being involved in the greyhound industry. Some of the propaganda being thrown around about the racetracks in general is that they rely on a “subsidy” from the state. That is a complete misuse of the term. All of the money is raised at the tracks. Period. They are then taxed higher than any industry in our state. A small portion then returns for the purse fund for the racetracks.

Furthermore, let’s also not forget that money raised from racetracks and video lottery go toward funding for our education system, improving the quality of life for our seniors, and strengthening our tourism industry. This is something we must work to maintain and improve, not decimate.