(Editor’s Note: The same five questions were distributed to the two candidates running for Ohio County Sheriff. They were invited to offer their answers for publication free of charge, and, as explained to them, the articles will appear in the order the replies were received.)

John Powell has run campaigns to become Ohio County’s sheriff the past two election cycles, but he was defeated both times by the current sheriff, Republican Pat Butler.

But now that Butler is being forced out of the office because of term limits, Powell has advanced to the general election for the first time and has campaigned vigorously since the launch of his candidacy in March because he believes we live in a dangerous world, and that includes Ohio County.

The 1978 graduated of Wheeling Park High School departed the Wheeling area to enlist in the United Sates Navy, and after his 20 years in the service he joined law enforcement in Virginia before accepting a position with the U.S. Naval Academy’s Police Department. That move positioned him for a security details with the White House Presidential Cabinet Members operation.

Powell credits his work ethic to his parents, and no matter where he lived, he insists that he has always called the city of Wheeling his home, and not only because his ancestors have been traced all the way back to the region’s Civil War era. 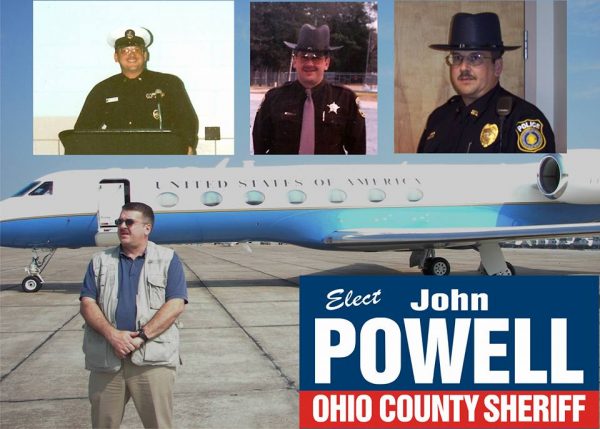 Powell’s career in law enforcement extends to his 20 years service in the United States Navy and several years following his retirement from the military.

The Republican candidate has told potential constituents during the current campaign cycle that he believes the next sheriff must possess a diverse background in training, law enforcement, and emergency services, and that Ohio County’s next sheriff must be able to understand how all facets of emergency services must work in a cooperative manner to effectively ensure safety for the county’s residents.

Powell and his wife, Michelle, returned to Wheeling in 2007, and he now is the manager of Cabela’s Outfitters’ Gun Library. An occasional contracted investigator for the federal government, Powell firmly believes he is the right person to serve his Ohio County neighbors as the next sheriff.

Please explain your plan to address the drug trafficking that is taking place in Ohio County.

Drug abuse and trafficking are significant issues in the county. The only way to mitigate the issue is through a holistic and multifaceted approach. This will include education, engagement, and acknowledgement. Many organizations have been working on this issue. I will work with these agencies and work to make sure we all are working in a collaborative effort to mitigate the issue. We cannot merely arrest our way out of the problem, but I will work with all agencies, including federal and state agencies, to reduce the trafficking and transportation of illicit drugs in our community.

Additionally I want to form a Street Crimes Unit comprised of deputies, officers, and troopers. This unit is designed for short-term investigations, not long-term. They would work in cooperation with existing investigative units and would be an aggressive team who will move throughout the county for the sole purpose of putting drug dealers in jail. 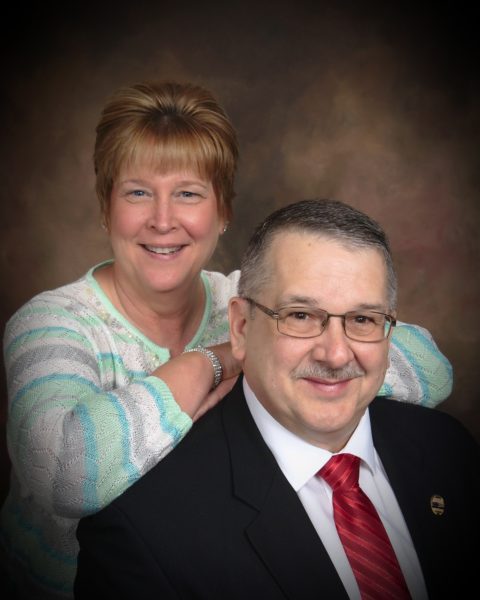 Powell with his wife, Michelle.

Would the deputies under your command patrol within the city of Wheeling or concentrate on the areas in Ohio County that rest beyond city limits?

The Ohio County Sheriff is tasked with providing security to the courts, handling mental hygiene transports, and law enforcement in the county’s 109 square miles. This area includes the incorporated areas within the City of Wheeling. The residents of the city are also taxpayers to the county.  While the primary service area will be the areas of the county outside of the city of Wheeling, all citizens in the county deserve excellent customer service regardless of their address, race, religion, creed, color, ethnic origin, religion, political persuasion, or economic status.

How would you approach collecting taxes in Ohio County so as much as possible would be paid by the county residents that owe them?

The process of tax collection is simple and straight forward. While the delinquency rates fluctuate depending on the economy of the region, a key to the successful increase in compliance is efficiency. An increase in compliance will result in an increase in revenue. The current office is staffed with three individuals. An understaffed office does not have the ability to be efficient and effective. I will ensure the office is adequately staffed, and I will work to improve the department’s effectiveness and efficiency. Both my staff and I will work to improve the delinquent taxpayer notification, and I will also work with the county’s attorney to ensure the noncompliant taxpayers are handled in accordance with the laws of the state of West Virginia. 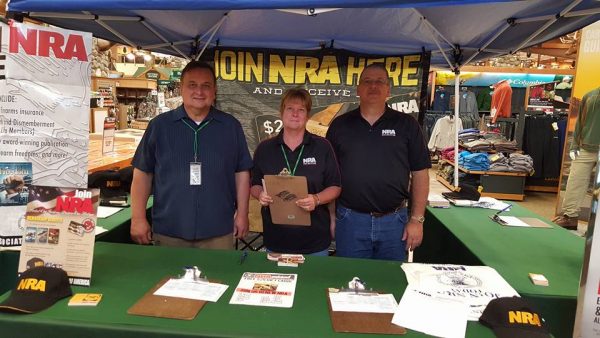 Powell is a staunch supporter of the National Rifle Association.

How would you preserve the number of deputies (34) now employed in Ohio County?

I will work to ensure the staffing is maintained at a level that provides excellent customer service and quality service delivery. This will mean constant conversations and dialogue with the public, as well as county commissioners. I will work to provide as much information regarding the calls for service as allowable by law. I will work with the local media and provide outreach via our website into the activities of the organization. The website should mirror other department’s that improve understanding of policing, improve transparency, enhance community trust and confidence in the department, dispel myths, and highlight realities. It will be a site on which residents will be able access data such as traffic stops, incident reports, and crime maps. It will have a listing of community watch meetings and have the means to provide time-sensitive information to the public through social media.

The citizens of Ohio County have a right to know how their tax dollars are being spent and I intend to show them.

If elected by the people, who would you choose to serve as the chief deputy of the Ohio County Sheriff’s Office? Please explain why you would make that choice?