Search
Home
Athletics
Bicyclists in the Ohio Valley enjoy myriad recreational opportunities, from scenic bike trails to winding country roads beyond the city. Wheeling has a rich bicycling tradition, as evidenced by the popularity of the sport.

This surge in bicycling interest arrived in time to coincide with the Wheeling 250 events. As the town celebrates its birthday, bicyclists are participating in their own way, and thanks to the combined efforts of local groups, folks can spend time outdoors, get their blood pumping and enjoy a bit of Wheeling history on the same ride.

Last month, the two bike groups joined with Friends of Wheeling for a Historic Wheeling Bicycle Tour. Fifty riders traveled from Centre Market, through the downtown, across the Suspension Bridge, south to the Wheeling Island Casino and back — a total of about 3.5 miles. Along the way, 14 stops provided brief historic tidbits about buildings and bridges, and riders received “passport” books identifying the locations. The ride covered nearly the same route traveled in 1983, before the current trail system was developed. 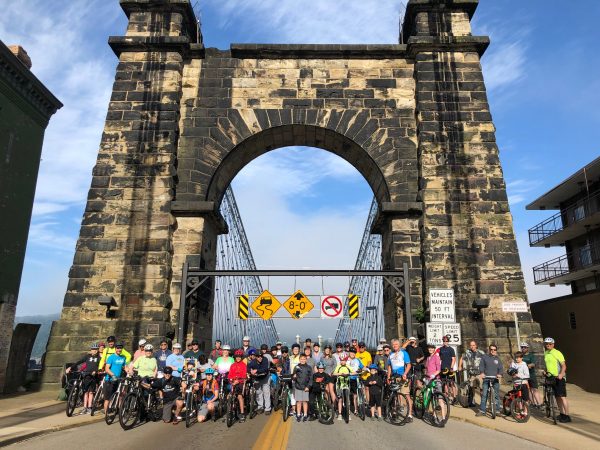 Riders in the 2019 Historic Wheeling Bicycle Tour at the Wheeling Suspension Bridge. (Photo by Gary Zearott)

Three riders, Rob and Kathleen Reed and Jeanne Finstein, participated in both events. Finstein is president of Friends of Wheeling and a member of the Ohio Valley Trail Partners.

“We were pleased that 50 people of all ages came out for the Historic Bicycle Tour (51, if you count little Johanna in a baby seat),” she said. “Three of us were veterans of the similar Friends of Wheeling-sponsored tour that was held in 1983. We all had an enjoyable ride … and we learned a bit of Wheeling history along the way. The weather was perfect, and of course, the highlight was riding across the historic Wheeling Suspension Bridge.”

Finstein said that the event was popular. She’d like to plan a similar ride in 2020 in a different Wheeling neighborhood. 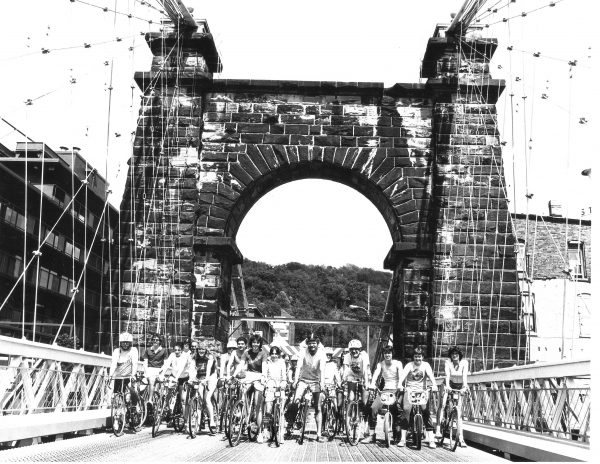 Riders in the 1983 Historic Wheeling Bicycle Tour at the Wheeling Suspension Bridge. (Photo by Gary Zearott)

Cycling is hardly a new activity in our part of the country. Bicycles made an appearance in Wheeling 150 years ago, according to the newspaper reports from 1869. The March 26, 1869, Wheeling Intelligencer reported that “A Velocipede Rink opened in the old City Hall — upper end of the Second Ward Market House. Instructions given. Small charge for the use of bicycle.”

Another article reported that “an additional number of the wooden steeds have been ordered, and an opportunity will be afforded the ladies.” (A velocipede is defined as a human-powered land vehicle with one or more wheels, including the famous, high-wheeled penny-farthing.)

The bicycles of that day were nicknamed “boneshakers,” having a wooden frame with wooden wheels and iron tires — quite different from today’s bikes. But even then, adventurous young men used the machines to ride from Wheeling to Washington, Pennsylvania. Reports from April 19, 1869, state that it took one young man one hour and 15 minutes to travel the seven miles from Wheeling to Triadelphia, another 2 ½ hours to go another 15 miles to Claysville, and two more hours to reach Washington, “making a total of 32 miles in less than six hours travel time, which would do credit to a four-footed horse. The return trip took 7 ¼ hours, because in several instances the crowd impeded his progress.”

The May 5, 1869, Intelligencer included a set of rules — perhaps a bit tongue in cheek — “prepared by one who has thoroughly mastered this latest humbug”:

“Rule I: After you have made up your mind you were born for a little faster gait than horse cars get up, buy a velocipede, and if you wish to show your grace and dexterity, be sure and invest in a bicycle.

“Rule II: Avoid all liquids which tend to unsteadiness; divide your pennies so that an equal number shall occupy each pocket. Place your hat squarely upon your head (it might be well to carry a spirit level the better to accomplish this). Either leave your watch with your uncle or buy another for your other vest pocket, in order that the weight of one may not throw you out of balance. Also avoid tobacco, unless you put a quid in either cheek; and be sure that your cigar be held in the center of your mouth; also, part your hair in the middle.

“Rule III: Mount your machine. If you don’t succeed at first try, try again; it’s good exercise for the beginner. In this respect it might be well for the rider to get himself upholstered. The limbs may not work as freely, but it saves the skin.

“Rule IV: Balance yourself. This may seem a trifle difficult at first, but it becomes quite easy after you learn how … If you are practicing in the presence of ladies, act as graceful as possible.

“Rule V: After having acquired the art of balancing yourself, raise your feet to the cranks, and push out, the more the better, provided you keep at it … Never allow your bicycle to get on top of you; it learns its bad tricks, besides being bad for the projecting angles of your anatomy.

“Rule VI: When you conclude that you have mastered the forward motion, in a straight line, try your hand at a curve. These curves should be as long as possible at first, since a new rider is very apt to obey the laws of inertia, and continue in a straight line after the machine is turned in a circular one. This is regarded by most people as a spill.

“Rule VII: After having learned all sorts of forward motions, if you are desirous of putting on a few more emotional thrills, try the backward motion … it requires something more than cheek to make it a success. You will find your bicycle inclined to be down. This must be guarded against since it takes the poetry all out of the motion, and is not exactly what might be called a triumph of genius.

“Rule VIII: Never attempt any extra frills until you are sure of making the point intended. … And finally, when you have mastered your machine, and fondly imagine you can beat anything on wheels, don’t undertake to keep ahead of an express train, on the same track; there is some speed in locomotives yet, and if it should happen to overtake you, it might scratch some of the paint from your bicycle, and make it look bad.”

Despite the extensive set of suggested rules, it appears that bicycling became very popular in Wheeling, with a “rush of men and women, children and dogs” watching the first cyclists. By 1881, the “Wheeling Wheelmen” formed and met on alternate Mondays, joining the League of American Wheelmen in 1889. A photo of the group shows the Wheelmen posed in front of the former city-county building, a distant echo of Wheeling’s contemporary cycling community, which is so enhanced by groups like Bike Wheeling and Ohio Valley Trail Partners. 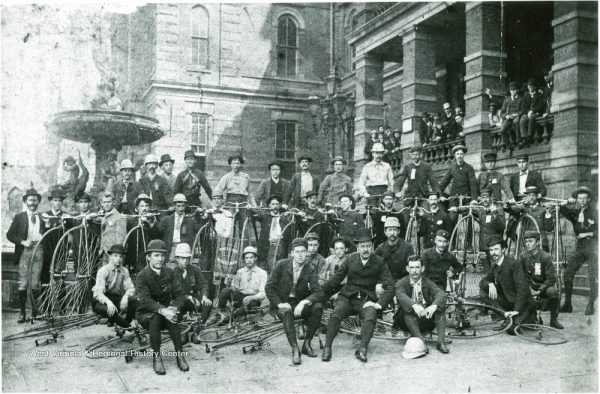 Members of the Wheeling Wheelmen pose in front of the former Wheeling City-County Building, 1889. (Photo courtesy of the West Virginia Regional History Center)

Though time has passed, bicycling is still a popular pastime and form of exercise. With the current trail system available, riders now have several paved routes that can be taken without fear of interference from automobile traffic.

• Jeanne Finstein is president of Friends of Wheeling and a member of the Ohio Valley Trail Partners.