Officials of the city of Wheeling spent two years guiding tours of the vacant, dilapidated buildings within the 1100 block of downtown Wheeling, and more than a year clearing most of the block. 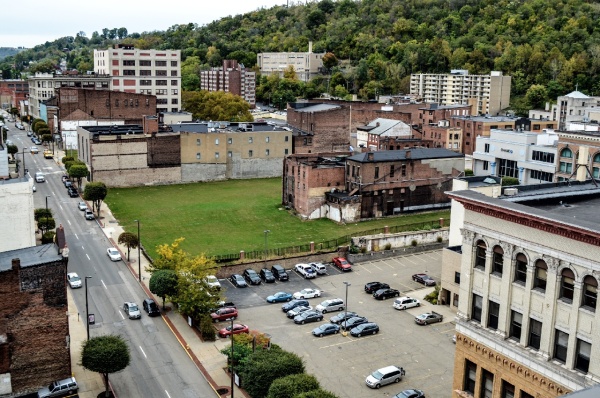 “The wish and focus (for the 1100 block) would be a multi-purpose development that would include commercial, residential, and maybe some retail,” Wheeling City Manager Robert Herron said. “That’s the dream. We would like to see first-floor commercial or retail, and then have residential or office space on the floors above the street.”

“There have been inquiries,” Herron said. “But nothing in concrete.”

Prior to the demolitions, council member Gloria Delbrugge (Ward One) explained that no plans were in place for the cleared property. She said the biggest issue potential developers had with the older buildings was the cost associated with the upgrades that would be mandated by new ownership.

“The safety regulations and the fire codes have changed a lot over the years, and a new owner would have to upgrade everything to make it safe by today’s standards,” she said. “Because of the condition those buildings were in before being taken done, they were looking at millions of dollars.

“But now there is the potential for something new in downtown Wheeling, and it’s been a long time since anyone could say that,” Delbrugge added. “Right now, it’s green space, and it looks a lot better than it did before.”

Kurt Zende, an economic specialist and manager of Centre Market for the city of Wheeling, was one employee who guided several tours with could-be developers. He explained that one of the buildings, the former location of G.C. Murphy’s, was structurally sound, but asbestos, fire suppression codes, and deterioration would have led an investors down a very expensive path.

“Because that building sat empty for so long and because of what was still acceptable when it was still open, anyone looking to re-develop it would have been looking at a price tag of $4-to-$5 million,” he said. “And all of the other buildings were in the same boat.”

The razing of the structure that once housed Howard’s Diamond Center finally took place last month following the resolution of an insurance claim by the owner. Damage to the building occurred during the first round of demolitions.

“The Panda and Vocelli’s are there to stay as far as those owners are concerned,” Herron said. “As far as the (Panda) Chinese restaurant, our building code officials have attempted to work with them to make sure the building is sealed. At this time it is not because they have a tarp on it.

“The other issue is that there is a wall is owned by the city. We want to remove it, but we are not sure what will happen to the building that houses the Chinese restaurant. They would need to construct their own wall so the city can take its wall down.”

Several downtown businesses have performed façade work during the past few months, and Kalkreuth Roofing completely renovated the former Riley Building on the corner of Chapline and 14th streets. McKinley & Associates started gutting the former Fort Henry Club on the same corner in October.

“I think things are finally turning the corner for the downtown area,” said council member Don Atkinson. “It’s been a long time coming, but now you see a lot of work being performed on a lot of buildings.

“As far as the future of the 1100 block, I know conversations have taken place, and that’s more than I can say about that block before we took those buildings down,” he said. “No one else was going to do it, so the city had to do it so something could replace what was filling that space.”

Since the Wharf Garage was replaced by Heritage Port on Wheeling’s riverfront, development along Water Street also has been anticipated. Herron explained that while the city can and would offer incentives, and any project would be privately funded. 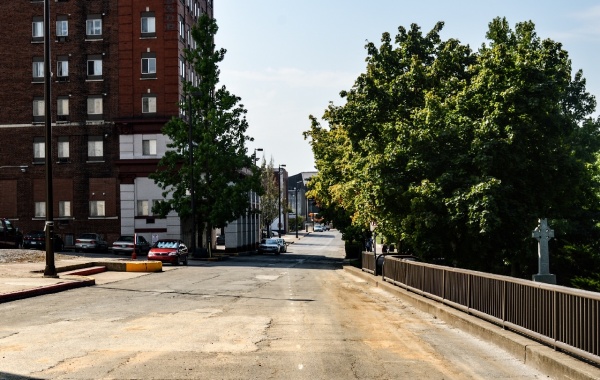 “If development along Water Street were to happen, it would have to be performed by the private sector, and the city is in the position to help,” the city manager said. “It’s a combination of having the critical mass during non-event times. That’s what produces the willingness on the private sector’s part to develop what they own.

“There has been some recent interest from local developers who have come up with some ideas, so I don’t think it’s a dead idea,” Herron said. “I think having more people live in the downtown area would push that idea further along.”