Earl’s Note: This is the first in a planned series of short installments about the events that shaped our history. Events that took place in other locations often involved the men and women from our part of the upper Ohio Valley. Even though the Squaw Campaign took place in Pennsylvania, it involved men from this area and the impact of it affected our region. At the end of each story, I will provide a set of GPS coordinates that you can use to visit the locations of the events discussed in the story. Instead of “Geocaching” we will play “Geo-History.”

In the summer of 1776, Washington put out a call for men from Pennsylvania and Virginia to build his army. During July, August and September, just over 400 men answered that call and reported to Kittanning, Pa., to become the 8th Pennsylvania Regiment of the Continental Army. On February 12, 1777, another group of men reported to Fort Pitt where they became the 13th Virginia Regiment. Both of these units included men from Ohio County. Captains Sam Brady and Van Swearingen served in the 8th PA and Benjamin Biggs served in the 13th VA. Both of these regiments saw battle while serving in the Continental Army and both spent the winter of 1777-1778 at Valley Forge.

While the men from western Pennsylvania and Virginia were away from home serving in Washington’s army back east, some of the Indians supported the British by waging terrorist warfare on their unprotected families. As word of the brutality of the raiding parties reached the men back east, they began deserting in increasing numbers to go home to protect their families especially during the time at Valley Forge. The Valley Forge records include a number of trials for desertion. In addition to the raiding parties, some of the Indians joined forces with the British who were headquartered at Fort Detroit. On September 1, 1777, the Indians and British jointly attacked Fort Henry in Wheeling threatening the entire western portion of the newly formed United States.

In response to the threat from the west, George Washington sent an experienced army Officer named General Edward Hand to Fort Pitt to assume command and to organize the Western Department of the Continental Army. General Edward Hand took command at Fort Pitt on June 1, 1777 relieving Captain John Neville who had taken over during the summer of 1775 after John Connolly was forced to leave Pittsburgh. When General Hand arrived at Fort Pitt, he found himself in command of an undisciplined collection of militia companies from Westmoreland County, Pennsylvania and Ohio County, Virginia. To make matters worse, the Virginia and Pennsylvania militia units disliked working with each other because of the disagreement over which colony owned the District of West Augusta where Fort Pitt was located. In December, 1777, Hand wrote a letter to Washington describing the unorganized and undisciplined nature of the militia units and asking to be transferred back east to the regular army.

Around the second week in June, 1777, General Hand received the first of two letters from the Rev. David Zeisberger, at Shoenbrunn on the Tuscarawas River in the Ohio country, informing him that the Indians and British were assembling an army to destroy Fort Henry and the surrounding town of Zanesburg. In response, Hand sent five Virginia militia companies to reinforce the fort and sent orders to Colonel Andrew Swearingen at Holliday’s Fort instructing him to provide supplies to Fort Henry. Wyandot Chief Pomocan (AKA Half King) led the attack which took place on September 1, 1777.

After the attack on Fort Henry, Zeisberger notified Hand that the British were planning to build a munitions depot near the mouth of the Cuyahoga River on Lake Erie. According to the information, the British planned to ship munitions and supplies to the new depot by boat from Fort Detroit. The new depot would provide weapons and supplies for the Indians who were assisting the British. In response to that information, General Hand put together an army of around five hundred Westmoreland County, Pa., and Augusta County, Va., militiamen with the goal of going to the mouth of the Cuyahoga River and destroying the British munitions depot before it could be put into service. Col. Providence Mounts, Col. William Crawford, Major Brenton, William Brady and Lieutenant Simon Girty all participated in the expedition. Around the middle of February, 1778, the army headed north along the Ohio River with plans to follow the trails north along the Ohio, Beaver and Mahoning Rivers and then northwest to the mouth of the Coyahoga. When the expedition set out, the frozen ground was covered by several inches of snow, but the weather warmed, and it began to rain. The rain and melting snow sent the streams over their banks and turned the countryside into a muddy mess. Streams that normally were ankle deep became swollen rivers that the men were forced to swim across or detour around. One man drowned while trying to cross a swollen stream. About 15-20 miles south of the confluence of the Mahoning and Shenango rivers at the headwaters of the Beaver River where Newcastle, Pa., is located today, the men began to see large numbers of Indian tracks. Hand sent scouts ahead to reconnoiter. When the scouts returned, they reported that they had discovered an Indian village at the forks of the river. The scouts reported that 50-60 Indian Warriors were at the town. 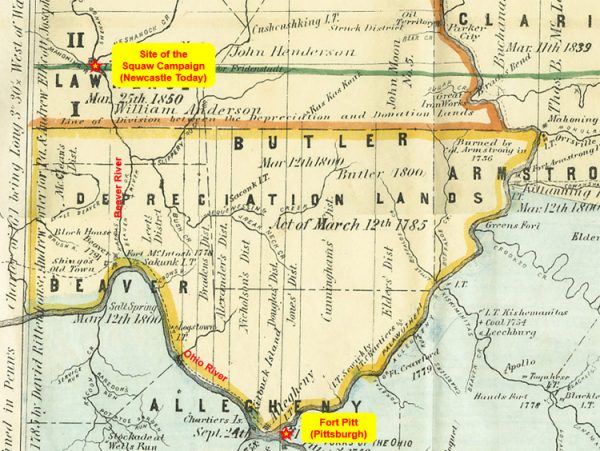 The village was a small Munsee town. The Munsees were part of the Lenape or Delaware Indian nation. Three clans made up the Lenape or Delaware nation: The Turtle Clan, the Turkey Clan and the Wolf Clan. Munsee was another name for the Wolf Clan. Most of the Lenape Indians were peaceful with the exception of a few members of the wolf clan. The Indians living in the town discovered by the expedition had maintained neutrality as the war broke out between the colonies and the English, but that didn’t matter to the undisciplined militiamen. They surrounded the town and attacked. However, most of the men from the town were away hunting, so the only occupants of the town were some old women and a few children. One of the old women there was Delaware Chief Pipe’s mother. She was shot several times, and then John Hamilton killed her with a tomahawk blow to the back of the head after which someone scalped her. Chief Pipe’s brother, along with his wife and children, was also in the town. The wife and children managed to escape into the countryside through a gap in the militia encirclement left by Col. Mounts’ unit. Pipe’s brother stayed to defend his mother. Pipe’s brother got off one shot that wounded Captain Scott in the arm before he was shot several times. Then Reasin Virgin killed him with a tomahawk blow to the head. (Some accounts state that some of Pipe’s brother’s children were also killed, but the eyewitness accounts that I read did not say anything about that.) The entire attack on the village was over in a matter of minutes. The only survivor was one old woman who had one finger shot off. The militiamen asked her where the men from the village had gone, and she told them that almost everyone in the town was away on a hunting expedition with the exception of a few men who had gone to a salt lick about 10 miles upstream to obtain salt.

Simon Girty and Major Brenton missed out on the attack on the Indian town. When the army broke camp that morning, Major Brenton discovered that his horse had gotten loose during the night and was nowhere to be found. As the army moved on, Simon Girty volunteered to stay behind with Major Brenton to look for the missing horse. After several hours of searching, they found the horse and headed north to rejoin the army. By the time they reached the forks of the river, the attack on the village was over. Girty volunteered to lead a detachment of militia upstream to the salt lick to see to the Indians who had gone to collect salt. When they arrived they found four old women collecting salt and a young boy with a small caliber rifle who appeared to be hunting birds. Several of the men fired at the boy and then got in to an argument about who should get credit for the kill. Since Simon Girty was in charge, he declared that Zachary Connell should receive credit for the kill giving him the honor of collecting the boy’s scalp. In the meantime, the some of the other militiamen opened fire on the old women killing all four of them. (One eyewitness account said that one of the women was taken prisoner and the rest were killed. Others say that all four were killed.) After collecting the old women’s scalps, the party returned to the forks of the river and rejoined the rest of the army. 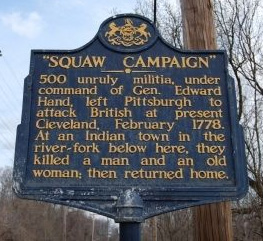 Because the countryside was such a muddy mess, General Hand decided that reaching the mouth of the Cuyahoga was not possible, so the army headed back to Fort Pitt. By the time the men arrived at Fort Pitt, they were already being hailed as heroes for killing the unarmed women and the young boy, and people were calling the excursion “The Squaw Campaign” It is still known by that name today. In his report, Hand described his casualties as “one man drowned and one man wounded in the arm.” General Hand was appalled by the savage behavior of the poorly disciplined militiamen. In May, 1778, General Hand sent a letter to George Washington and a letter to the Continental Congress asking to be relieved of the command at Fort Pitt and reassigned to the regular army back east. In order to strengthen the Western Department, Washington sent the 8th Pennsylvania and the 13th Virginia regiments to Fort Pitt in the spring of 1778.

Washington sent a letter to General Hand assuring him that his request for transfer back east would be met as soon as a suitable replacement could be found. In his letter, Washington also told Hand that he had looked in on Mrs. Hand and found her to be well, so General Hand was likely also missing his family who were back east.

In August, 1778, General Lathan McIntosh replaced General Hand as commander of the Western Department.
The Squaw Campaign represented a dark day in our early American history and it impacted events later in the war. In spite of the murder of their brothers at the forks of the Beaver River, the Delaware chiefs sought to make peace with the Americans and to remain neutral during the war. They signed the Treaty of Fort Pitt later that same year which the Americans broke only a couple of years later with the massacre at Coshocton. The next installment on this series will describe that event. 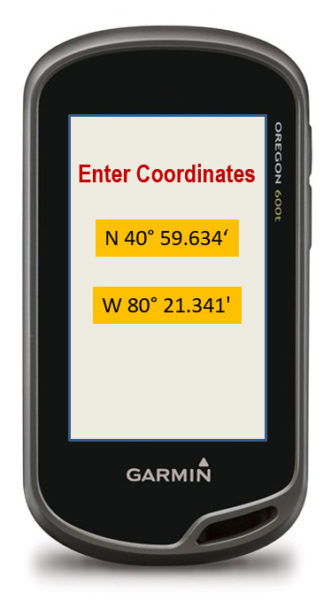 Here are the Geo-History coordinates for some of the locations mentioned in the story:

Kittanning, Pa., where 8th PA was mustered into the continental Army: 40° 48.694′ N, 79° 31.443′ W  (Also the site of the Lenape Indian town by the same name destroyed by Colonel Armstrong after the Indians killed his brother at Fort Granville in 1756) Note: Sam Brady and Van Swearingen both served in the 8th PA.

If you are unable to visit the locations in person, simply copy the coordinates and paste them into the search box on Google Earth. Then use the street view to try to find the historical marker shown earlier in this story. Have fun!
Thanks for taking time to read my story. If you enjoy my Geo-History game, visit the West Liberty Historical Society Facebook page for more!