With beans or without beans?

Those are a couple of the decisions that competitors and patrons will need to make when the 15th Annual Wheeling-Feeling Chili Cook-off returns to the downtown district’s Heritage Port this Saturday.

The family oriented event, which forwards all proceeds to the United Way of the Ohio Valley, was founded by Brian and Rose Humway Warmuth and features live entertainment, more than 30 different competitors, and also chili from several Wheeling-area restaurants. The funds are raised by attendees who purchase tasting tickets to sample the numerous varieties of chili and salsa prepared by the contestants. 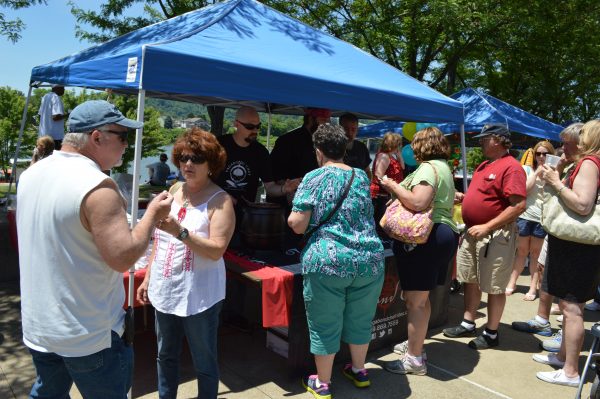 More than 30 competitors will cook during the 15th annual Wheeling Feeling Chili Cook-Off.

“Every year we have tweaked a few things to make the event better and better, so this year we are adding a children’s area with some bouncy houses, and there will also be a couple of barbecue pit groups to make some food and to make a barbecue chili,” Humway Warmuth said. “Our attitude is the more the merrier, and that’s how we add freshness to it each year.

“And the cooks will be on the top of Heritage Port again as they have been the past few years because it makes it easier for the people to visit each tent to taste as much chili as they can,” she continued. “That setup also helps the vendors because that way we can have the refreshments right there near the chili competitors.”

Tents, tables, and chairs are provided for all individual cooks as part of the entry fee. Cooks can enter in the following categories: red chili, chili Verde, salsa, and Homestyle. Brian Warmuth is the head judge each year.

The awards bestowed to the winners each year.

“He’s been cooking for close to 30 years, and he’s the only cook to hold championships for three years so he knows a little about making chili,” Humway Warmuth explained. “He also has cooked at the World Cook-off more than 10 times, and he’s done very well there, too.”

The event is an official International Chili Society (ICS) competition, and the ICS is a nonprofit organization that sanctions chili cook-offs with judging and cooking rules/regulations. The events extend worldwide and benefit charities and nonprofit organizations. All winners of ICS-sanctioned cook-offs qualify to compete for cash prizes and awards at the World’s Championship Chili Cook-off held each year in October. The ICS is the largest food contest/festival organization in the world.

Each competitor is mandated to produce at least one gallon of competition chili, and sanitarians from the Ohio County Health Department will be on hand to ensure each cooking operation meets state and federal regulations. The salsa division will kick off the judging at 12:30 p.m., and the process continues with commercial (1 p.m.), Verde (2 p.m.), Homestyle (2:30 p.m.), and red (3:30 p.m.). The awards ceremony is set for 5 p.m.

“It really comes down to what the judges like on the day of the event, and people like their chili in all kinds of different ways,” Humway Warmuth explained. “What Brian, who is the head judge, tells the judges before the judging begins is to pick the one chili that they could eat for the rest of their lives. That way the judges are in that frame of mind.

“It is a sanctioned and timed event with divisions for the red, no-bean chili, the Verde, and the Homestyle, and with just a day away from the event we do have about 30 chili cooks who are going to be there, and if someone still wants to enter, they still can,” she said. “But no matter what division they want to compete in, they all have to bring their meats cold along with their ingredients, and they have to cook the chili on-site. 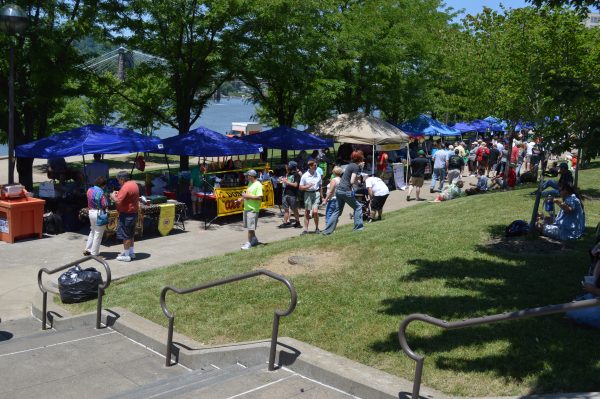 The event attracts hundreds of attendees each year.

“And we’ll also have plenty of commercial chili there for people to try from a lot of different local restaurants in the area, and we’ve also encouraged service organizations to do the same so they serve some chili while raising awareness about their organization,” she added. “We do all of this for the United Way of the Ohio Valley, and last year we were able to donate almost $10,000 to the organization under the United Way’s umbrella.”

Steel Cassa’s performance begins at noon and will continue until 3 p.m., followed by the New Age Adenas, a local band featuring members Mary Blake, Eric Wellman, and Greg Pawlack. A “car cruise” will be staged on 12th Street near Heritage Port.

Humway Warmuth is hoping even more competitors will decide to enter the event, and first-time cooks can do so for free. The Wheeling Feeling Chili Cook-off and its sponsors (City of Wheeling, WTRF TV7, and Carenbauer Distributing) will waive all fees and pay the $50 registration fee to join the ICS. 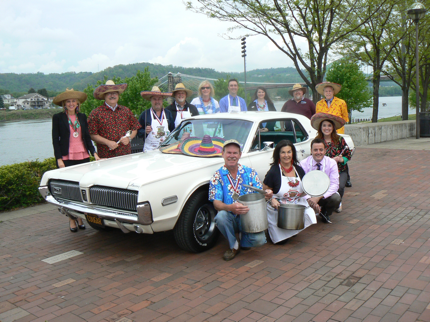 A car cruise will be set up along 12th Street on Saturday.

“If there is someone out there who wants to cook for the first time, it’s not too late,” Humway Warmuth said. “We are having an event for the volunteers and the cooks on Friday evening near Wesbanco Arena in conjunction with the Wheeling Nailers, and they could come to that and let us know at that time.

“Now, if someone makes a last-second decision and they all of a sudden show up to compete by 8:30 Saturday morning, then we will have a table and a tent for them,” she said. “We would prefer to know before the morning of the event; that has happened before, and we’ve come to understand that.

“Not only do we have the chance to raise a lot of funds for the United Way, but we also do this because the day is always a great day for everyone involved,” she added. “It’s a rain-or-shine event and a great chance to taste not only the competition chili but also many from a lot of different local restaurants, too, so we hope to see our biggest crowd yet.”

(Photos provided by the city of Wheeling)