She’s the girl that all adore- the Girls State girl. With great thanks to the American Legion Auxiliary, the Rhododendron Girls State program was able to celebrate its 72nd session providing leadership, confidence, American pride, and fun to girls from all over the state. Going into the weeklong camp hosted by Wheeling Jesuit University I was honestly nervous- my first experience where I would be thrown into a situation where I would be on my own and learning new concepts, but with great leadership and the common feeling between my peers those nerves didn’t last long.

Throughout the week my fellow young leaders and I were exposed to opportunities that don’t occur in other programs. From learning the ins and outs of county government, with Wheeling’s own Brenda Miller, to having personal conversations with Senator Joe Manchin, I was able to truly grasp the concepts of how our county, state, and country coexist and intertwine. State Senator Jack Yost walked us through the process in which a bill becomes a law, and he questioned what we would like from our lawmakers. The resounding resolutions from that conversation were action against bullying and a better selection of school lunches.

We heard all week that the friends we made at Girls State would be our friends for life, but I was skeptical to believe that after the first few days. By the end of the week however, I had discovered girls with the same interests as me that I intend to keep touch throughout the year. I became close with two girls specifically- one from Harrison County and one from Jefferson County. Between the three of us, it was hard to believe how different life was in our individual counties. Being the 17 year old girls we are, we compared the styles of homecoming dresses worn at our schools and where we plan to go to college (all three of us still undecided). Meeting girls from McDowell or Kanawha counties showed even more differences in lifestyle around the state. 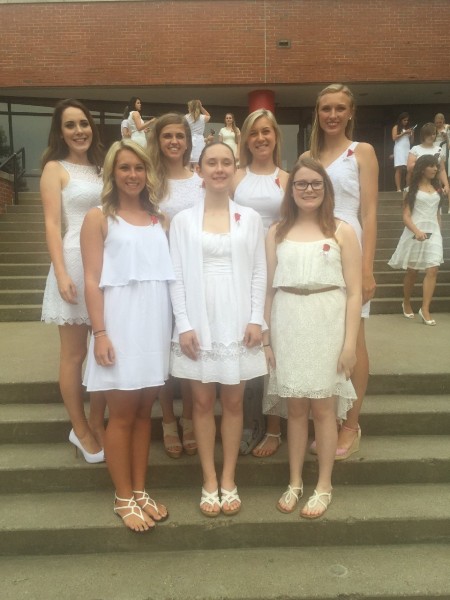 I think the most unique aspect of Girls State had to be the election processes. At the beginning of the week, citizens had the opportunity to file for an office and run their own campaign. From rallies and speeches to sign making and walking from table to table at lunch, the election process was overwhelming and tedious. I decided that running for one of five positions on the Governor’s Board of Public Works would best suit me and ended up spending hours making signs and writing speeches. By the end of the week I was fortunate to win my election with the help of my newfound friends and support of other candidates. In a heated governor’s election, Katie Mossburg of Bridgeport High School came out victorious. Our presiding governor Miss Bonnie Walton, a recent graduate of Washington High School, provided the best example of what a Girls State girl should be and became a personal friend to just about every girl she met. I believe Katie will do the same during her term next year.

Besides the meetings and elections, director Mrs. Michelle Sirbaugh and assistant director Dr. Rosemary Thomas made sure with week was jam packed with fun. Each night after party caucus meetings, a dance party was held with all citizens as well as a talent show. The talent demonstrated from girls was honestly unbelievable. Opera singers, ukulele players, ballerinas, and stand-up comedians all graced the stage each earning a standing ovation. After hearing speeches and seeing the talents, it was easy to believe between the citizens that anything could be accomplished.

The most important and most relevant theme from my week at Rhododendron Girls State had to be the respect and appreciation for our military servicemen and veterans. Girls State instilled such a greater respect for those individuals and their families. This theme was evident in conversation with Senator Manchin or when listening to veterans tell their stories. We also participated in flag raising ceremonies daily and honored citizens who had family members serving currently during a candlelit ceremony.  This sacrifices made by our veterans and servicemen and women cannot ever be fully repaid, but a simple thank you to one of those individuals upon seeing them could easily brighten their day.

Rhododendron Girls State was truly a once in a lifetime experience. Without Wheeling Jesuit University to host and the American Legion Auxiliary to sponsor each citizen, this camp would not be possible. Girls State taught me the importance of civic duty, military appreciation, and how to make friends when placed in a room with over 350 people I had never seen before. I’d like to give one final thank you to all individuals who keep this volunteer based program going and improving year after year. The experience is irreplaceable and unforgettable. 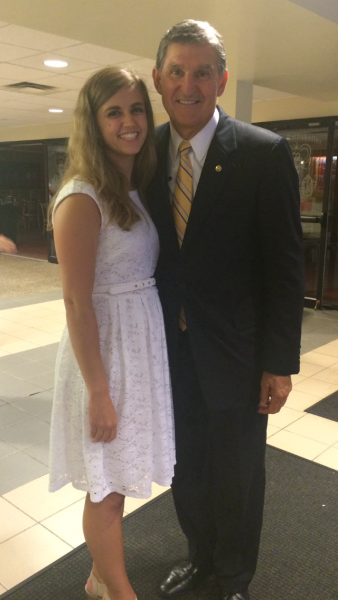 The author with Senator Joe Manchin.