Installing a zipline attraction at Grand Vue Park in 2012 was a huge surprise to the people of the Upper Ohio Valley because such outdoor recreation had never been readily available within the Wheeling metro area.

This time around, officials and board members brainstormed about what could be the next addition within the 650-acre Marshall County park. By spring, a new “Mega Jump’ rappel tower, a giant, a three-person swing, an oversized trampoline, an aerial rope course, and a 28-foot climbing tower will be featured in Grand Vue’s “High Adventure Midway,” which will be located on the left side of Grandview Road and opened in the spring.

“Thanks to the success of the zip lines, the decision was made to continue to build from the ‘high-advantage’ theme,” explained Grand Vu General Manager Craig White. “We don’t want to repeat the attractions that other areas in this Valley have. We want to offer new opportunities here. 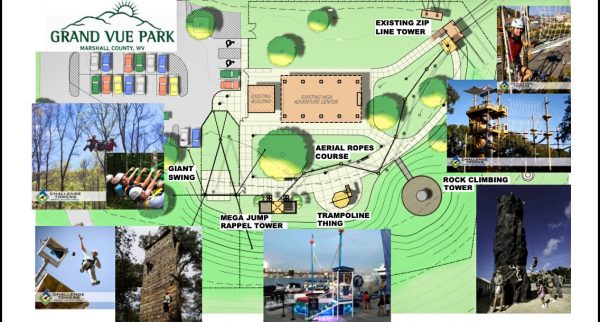 Nearly $700,000 will be spent on the addition of the new “high adventure” area. (Photo supplied by Grand Vue Park)

“Another part of what Grand Vue will do next year is add four new cabins, but these are going much different from the eight cabins that we have now. These cabins will be smaller, and they will be ‘treehouse’ cabins,” he continued. “We don’t want to do the cookie-cutter things. We want to offer things that are completely new to this region and these additions will allow us to accomplish that goal.”

This capital improvement campaign will cost approximately $2.5 million with the high-adventure area priced at nearly $700,000.

The cabins, the general manager explained, should be complete by the end of next summer and will be constructed on towers. The views from the one- and two-bedroom structures will be amongst the trees located at the end of the road where the park’s larger cabins are located now. They will feature glass walls, wrapped decking, and ADA accessibility as well as flat-screen TVs, Wi-Fi, air-conditioning and wood-burning fireplaces with electric starters.

“When you stay at one of these cabins, you’re going to be in nature the entire time,” White said. “Some of the views that you will have from these cabins are going to be striking, and those guests will probably see more deer and birds than they have ever seen in their lives.

“We are looking forward to adding all of these new amenities to Grand Vue Park because the community is going to enjoy them very much,” he said. “We knew we were up to something when we added disc golf in 2010, and now we have two courses, and we’re looking to add a third course in 2016. One of our current courses has been ranked as the best in the state, and that’s allowed us to attract disc golfers from throughout this part of the country.” 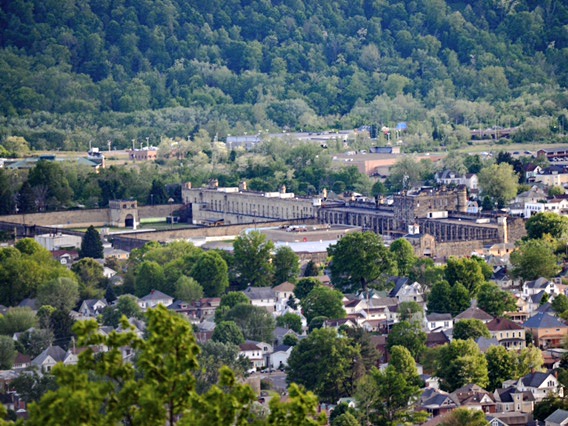 The former West Virginia Pen can be seen from the new overlook installed at Grand Vue Park earlier this year. (Photo by Steve Novotney)

A contractual agreement with Chesapeake Energy (521 acres; $3,500 an acre; 18 percent royalties) allowed White to orchestrate the addition of two zipline attractions three years ago. The zipline “ride” is 2,100 dual-line trip, and the “tour” either can be a two-hour or three-hour activity that includes four or eight dual lines.

An upcoming agreement with Chevron, White reported, allowed for him, his staff, and the board to create a new “master” plan for the park’s next 10 years and the “treehouse” cabins and the “Midway” are examples of that adopted vision.

“We’ve implemented the, ‘Wild and Wonderful Starts Here’ concept, and we’ve been looking at something we could bring in here that would be very unique to this area,” he said. “We wanted something that would maintain that adventure concept, so started looking at high-adventure activities and lodging. Lodging is the number one thing in Marshall County that we have been lacking so that was very important to us.

“The eight cabins that we have now are great, and they are beautiful, but they are big, and it’s difficult for a couple or a small family to go into one of them. That’s why we decided to add the one- and two-bedroom treehouse cabins. Treehouse Masters on TV has been a big hit, and that means people love the concept. 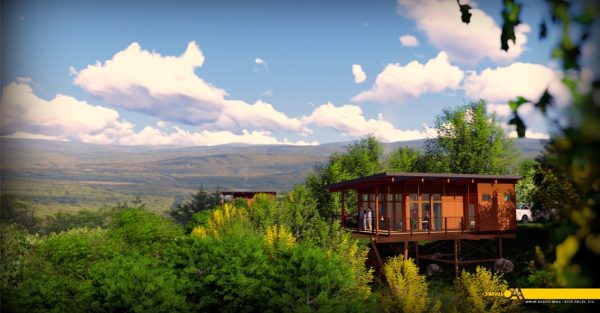 Four new “treehouse” cabins will be constructed and completed by the end of the summer. (Photo supplied by Grand Vue Park)

“What is happening here at Grand Vue is something that really started back in 2003, when the Marshall County commissioners put together a master plan. Thanks to that plan cabins were added, and so were the banquet hall, miniature golf, and the playground area.  And when I came into the picture in 2008, they were already working on more, and here we are today.”

But what about tomorrow?

With the addition of the new cabins and the high-adventure attractions a total of 400 acres have been developed in same way. That leaves, White noted, another 250 acres of space.

“This new masterplan has a lot of opportunity within it because we are looking at a lodge, at restaurants, more cabins, tenting camping, RV parking, and a full-length nine-hole golf course,” White said. “It is a 10-year masterplan, and it is, of course, a floating document, so as new trends come up, we’ll be able to change direction if we have to.

“I have a great staff because they are willing to consider all the options and because they are willing to try these kinds of new things,” he said. “We sometimes sit around and we talk about what this person and that person would like to see next at Grand Vue, and they have really come up with great ideas. I’m pretty lucky to be in this position right now; I can tell you that.”