We were sitting in Oglebay Park’s Amphitheatre on a night in June 1965 waiting to see a new show we’ve never heard of, when all at once people came from all over the hills rushing onto the stage. The Fender guitars and the drums were pounding out a tremendous beat. When the chorus started, they sang about “Which Way America” and building “A New Tomorrow.” When they got to their major songs “Freedom Isn’t Free” and “Up with People,” I was totally hooked and wanted to know more.

It didn’t take long. An announcement was made that a meeting was to be held immediately after their performance in hopes of forming a local group to perform their show. My girlfriend and about 10 other young people showed up. That was the founding moment of SING OUT WHEELING, a local Up With People show.

There were three traveling main casts, and they were tasked not only to perform their show in each city they visited, but also to form a local organization to carry on with their message of rebuilding America and the World. They had casts from Germany and many other foreign countries.

At this time I was a 20-year-old studying at West Liberty State College to get a degree in business and to keep my deferment from Vietnam. I played guitar but nowhere near the quality of the Colwell Brothers, who performed with the show we had just seen. But I was adequate when supplied with the music from the show. I usually had other guitarists with me, a drummer, pianist, trumpet. Still, at times when we were starting out, I sometimes was the only instrument that we had.

We were blessed to have a full-time couple who worked for the sponsoring organization working with us. Miles G.W. Phillimore and his wife, Margaret, had a house at the very top of Glenwood Heights. Miles was a very straight-laced Englishman, but his wife had her roots right here in Wheeling. She was the daughter of Sarah Caldwell, the founder of the Wheeling Symphony. Margaret was inducted into the Wheeling Hall of Fame in 2006 for work she did after her husband died. She went to Wheeling Jesuit, received a degree in theology and started her career as one of the first Female Episcopal Ministers in West Virginia in 1977. 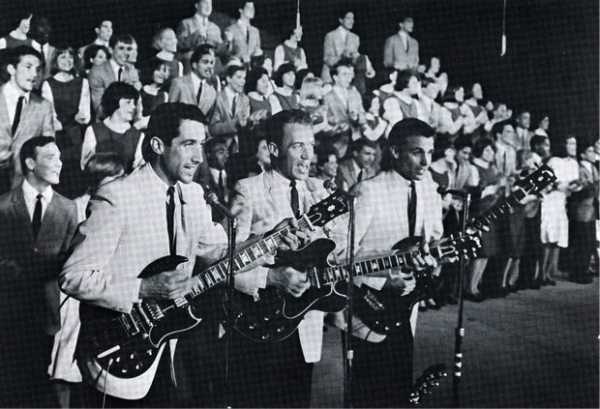 This was one of the National casts of UP WITH PEOPLE with the Colwell Brothers from 1965.

From this initial meeting after the performance, we were able to start growing the chorus, the band, and the soloists. We started performing anywhere we could – orphanages, grade schools, reform schools, colleges. Our first director was a pre-med student from West Liberty. He got us through the basics of performing in front of people, but we were on our own when it came to sound, staging, and choreography. Most of this was spelled out in the “Up with People” songbooks, but we had to downsize it considerably. We built risers to stand on that were sturdy, but also easy to transport. Our sound system had a four-channel mixer with four Shure microphones with two speakers big enough for most of the places we would be performing. We seldom had a sound-man during the show – just set the volume where there is no feedback and let it go.

Since our cast and crew consisted mainly of high school and some college students, we had a lot of parents helping out with transportation, fund-raising, construction, and sewing. We also had the backing of the community and the city. We had rehearsals in many of the halls in Wheeling free-of-charge. If we wanted to set up and perform on a flat-bed trailer in front of the YWCA to help stop the racial rioting going on in the country, no problem. We were fully integrated and also had the song What Color is God’s Skin? in our show. We had a few of the young African-Americans come up to us and started a dialogue with us. I think we made a difference and kept Wheeling more peaceful for a while at least.

As part of our mission to propagate our message, we went out and helped start SING OUT groups in New Martinsville and Parkersburg. This came in handy when we put on our larger shows and they would join us in the performance.

Eventually we got a new director, Yolanda Luchetti and even picked up a voice coach, Thelma Gitlin. At this point we started to take off and produce some gigantic shows. All of our performances were free, but we usually passed a hat for donations. We rented the Capitol Music Hall for one performance, and we went on with a raging thunderstorm happening outside. We were afraid that there would be a power outage, but the show went on without a hitch to a packed house.

One year we were on the homecoming program for West Liberty State College, followed by Dionne Warwick in her prime.

We heard that the City of Weirton had as a theme for their Fourth of July parade Freedom Is Not Free. Since one of our main songs was “Freedom Isn’t Free,” we knew we had to be in it. We borrowed a flatbed trailer from Weir-Cove Trucking and then designed a chicken-wire form with the theme song on it. To read the full story of this parade, click on https://bill26003myblog.wordpress.com/2010/11/09/freedom-isnt-free/ .

Then we decided to go back to where we first saw the National Cast perform: the Oglebay Park Amphitheatre. We had a combined cast of about 100 performers with about 10 outstanding musicians in the band. We used James Black & Sons for our sound. This time, the weather was perfect, the stands were packed, and the performance we put on was great.

The Cast of Sing Out Wheeling

Unfortunately this was our last hurrah. The college and high school students were all graduating and going on to bigger and better things, I finally had to help the U.S. Army fight the Communist hordes in Vietnam, and finally the show and the good times came to an end. The national casts of Up With People are still performing today.